Animals live on land, fish live under water and men rule over it all, because we are clever and adaptable. Right? Not so fast. What if there were certain kinds of fish – many kinds of fish – that could live outside of the water, moving over land and navigating happily without panicking and fighting to breathe? Buckle up, because here, in reverse order, are the top ten fish who can – and do! – thrive out of the water: 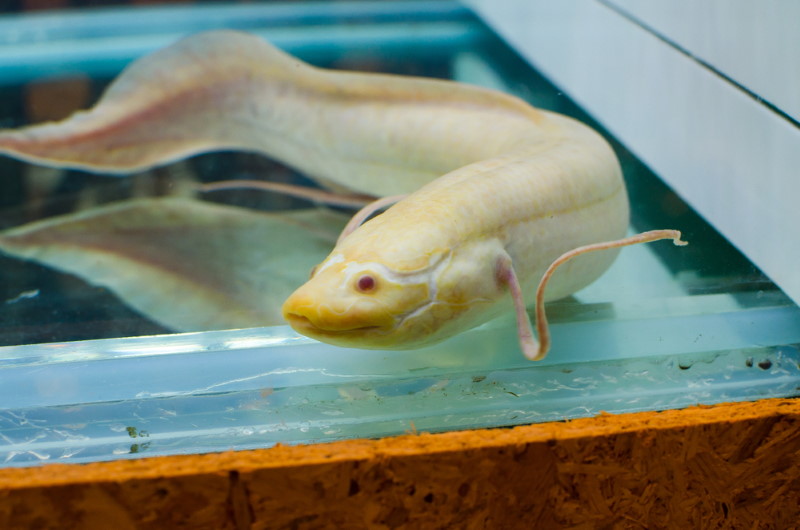 These funky fish are pretty hardy, able to bury themselves in the mud, when they sense a drought coming along, and survive in a state of dormancy for up to two years or more, when a convenient rain shower softens the mud and lets them know it is safe to come out again. These unique fish have limb-like fins which they use to creep along the ground, and they can survive up to the age of eighty or so. The Australian lungfish can grow up to 1.5 metres long, and they can stay out of the water for up to several days in order to move between pools of water and survive drought. Imagine seeing one of those big boys heading across your lawn? 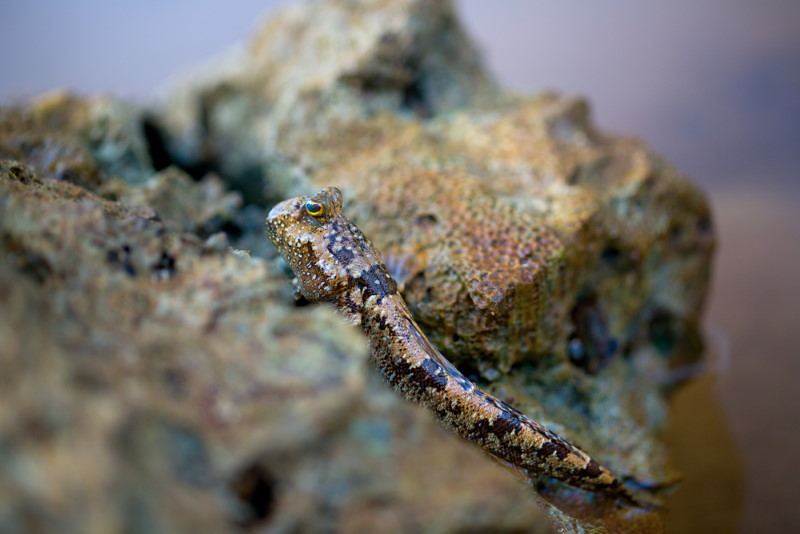 These small – and it has to be said, quite ugly! – fish are grouped in with the wide family of fish known as blennies. Not all blennies can escape the water, and only those who can are called rock-skippers and they are not to be mistaken for the frog of the same name! These fish escape the water to avoid being preyed upon and to catch their own prey, propelling themselves forward with their sturdy fore-fins – the equivalent of what would, on a mammal, be the forelimbs. These little fish do not stay out of the water for long, only about twenty minutes or so, and they can sometimes be seen in great masses that make it seem as though the ground is hopping and jumping along! 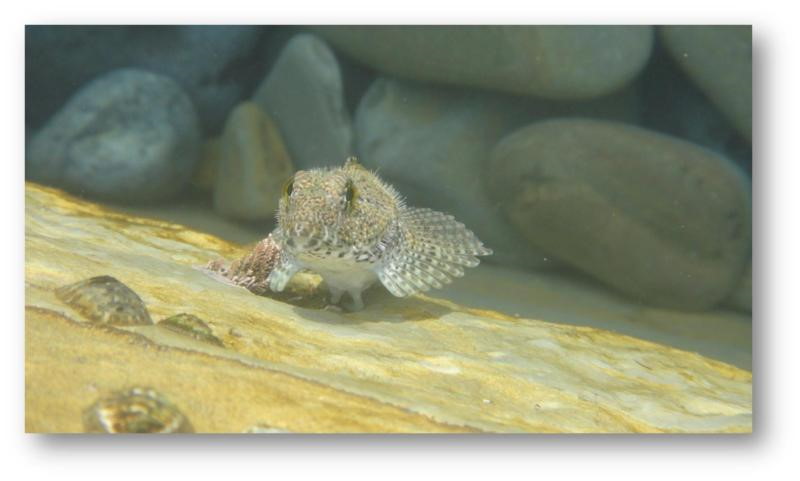 Named for the wide fan shaped fins that adorn their bodies, Woolly Sculpin can be an unexpected pain should you stand on one unawares. This is because the frilled fin mentioned above is pinned through with extremely spikey spines. These spines are not poisonous, but should you stand on one you should take great care to clean and disinfect the wound so as to avoid picking up and infection. Should their rock pool become compromised or begin to shrink, they will move on land to find another, and they can spend as long as twenty-four hours out of the water. 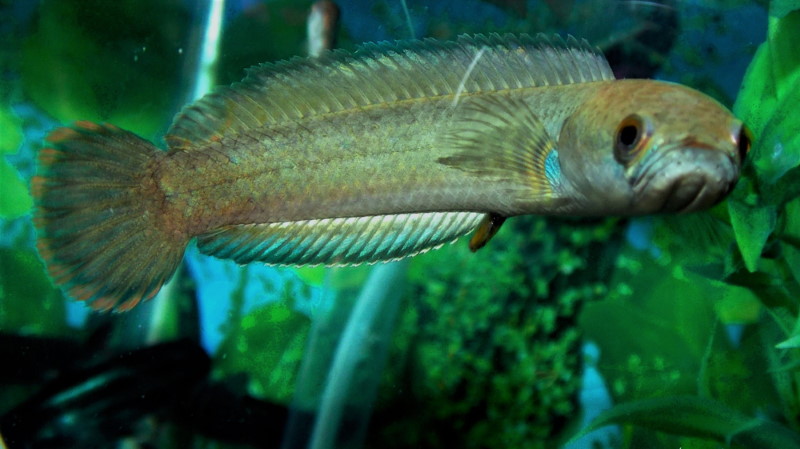 With a name that sounds like an LA gangster or a magic potion ingredient, this fierce-sounding Sri Lankan fish grows only to about ten centimetres long (that is about four inches). They breath air when on land and can stay out of the water for about four days, but run a risk of drying out and asphyxiating when they do so. The males look after the young, keeping them safely in the mouth – with the females rounding up escapees and putting them back in the male’s mouths! – until they are big enough to survive by themselves. When this time comes, the male evicts his youngsters by blowing them out through his gills! 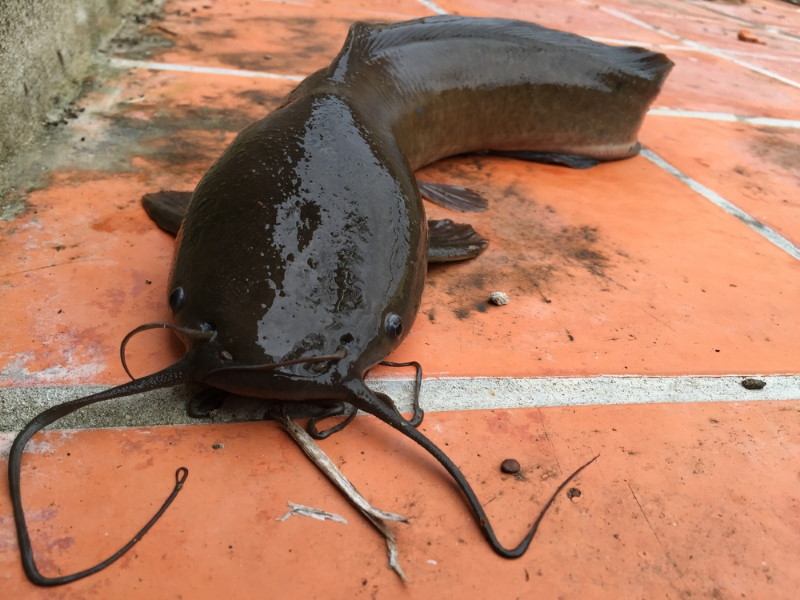 This broad-ranging family of land-walkers is found predominantly in Africa, but also in much of Asia, including India, Syria, and southern Turkey. These unique fish actually need both water and air in order to live comfortably, and can sometimes be seen gasping for breath if they are denied access to the open air. They are something of a cautionary tale though, in Florida their land walking abilities have seen them become an invasive species, escaping from ponds and tanks and making it into the glades and waterways, forcing their way into a delicately balanced ecosystem. 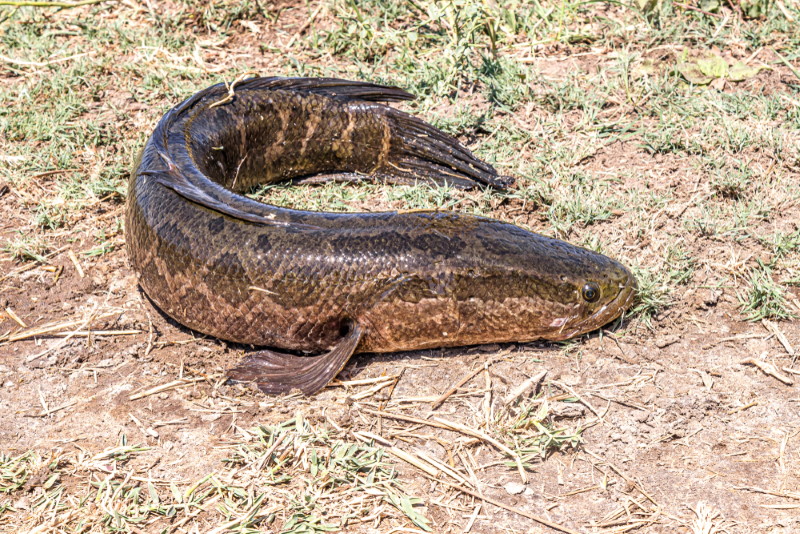 These hefty large-mouthed fish are big and chunky, weighing the same as a small dog or cat – and apparently easily able to eat one of the above! Native to both Koreas, China and Russia, these fish settle quickly into new areas and often disrupt existing ecosystems. This has resulted in the attractively patterned fish being declared highly invasive. They can grow up to one and a half metres long and will definitely give you a start should you come across one determinedly heading across your garden! And they can live for several days out of water, so if one decided to torment you by hanging around, you will have to be quite patient… 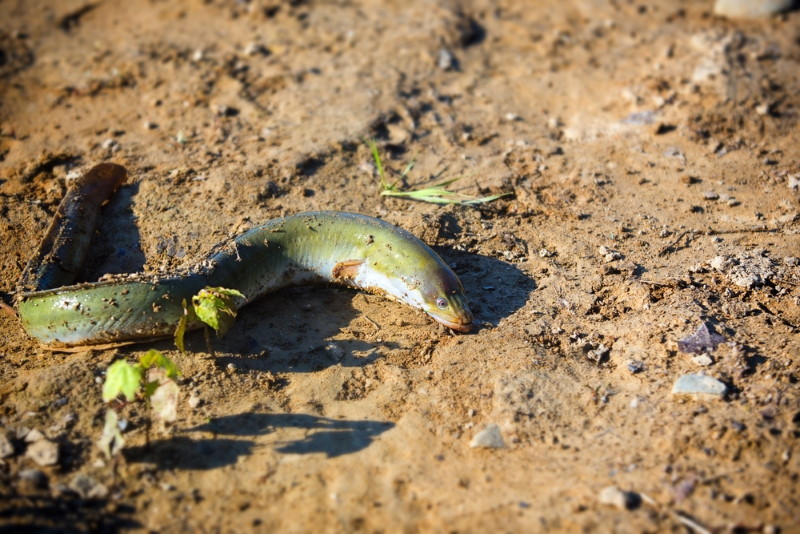 This migratory fish – despite its snake-like appearance, it is merely a fish (but then, so is a shark…) – can grow up to one and a half metres long, but those are exceptional specimens and usually they are no more than a metre long. They have been used a food sources for many years, forming the basis of London’s famous jellied eels, and also being caught while very young and translucent – a stage when they are called ‘glass eels’ – for food. They have also suffered serious depredation of their natural habitats with the damming of rivers and so on, which prevent the eels from migrating to their birthplaces to breed in their own turn, even though the wiggly creatures can travel over land. It is estimated that the current population of eels is just two percent of the 1970 totals. 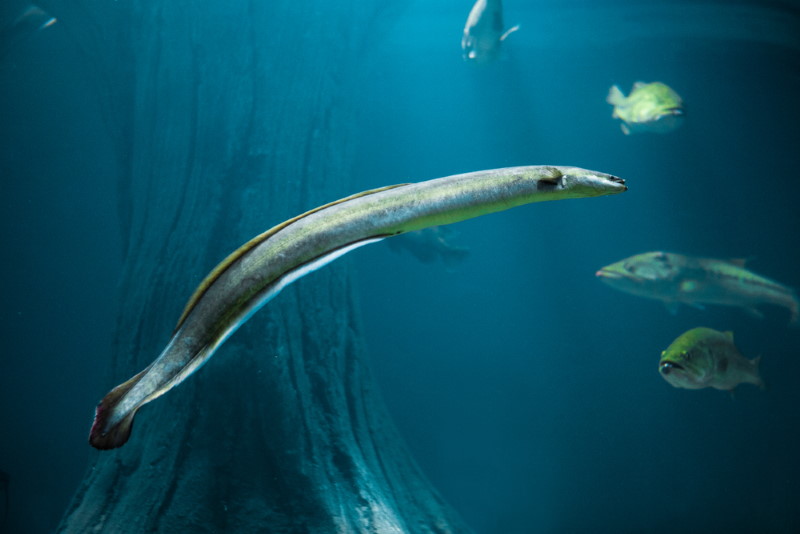 More snakelike in appearance than their European cousins, these creatures are not to be fooled with. Their heavy muscular bodies are solid and wide, and they are thickly coated with mucus that makes it very hard to get a grip on them. They are also somewhat testy, and will readily bite anything and – most importantly – anyone who annoys them. As they can grow to be three to four feet tall catching one of these hefty fellows can quickly cast a blight on a fishing trip! They will travel over land in their determination to return to their birthplace to breed, but, as with the European versions, dams, fences and blockages frequently hinder and distress them. 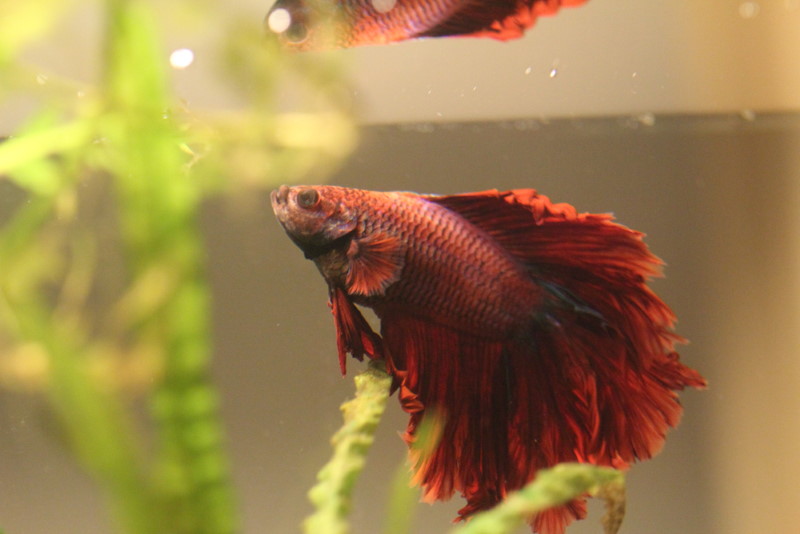 These fish are named for the gland that helps them to breathe, not for their ability to zoom through a maze to retrieve a prize morsel. The labyrinth organ is highly specialised breathing organ that helps the fish to survive on land and in water. These small fish are very attractive, and often appear in exotic fish tanks, especially variations like Siamese fighting fish. These fish can survive for a short time out of the water breathing air directly, thanks to that organ, but they must be kept moist or they risk drying out. 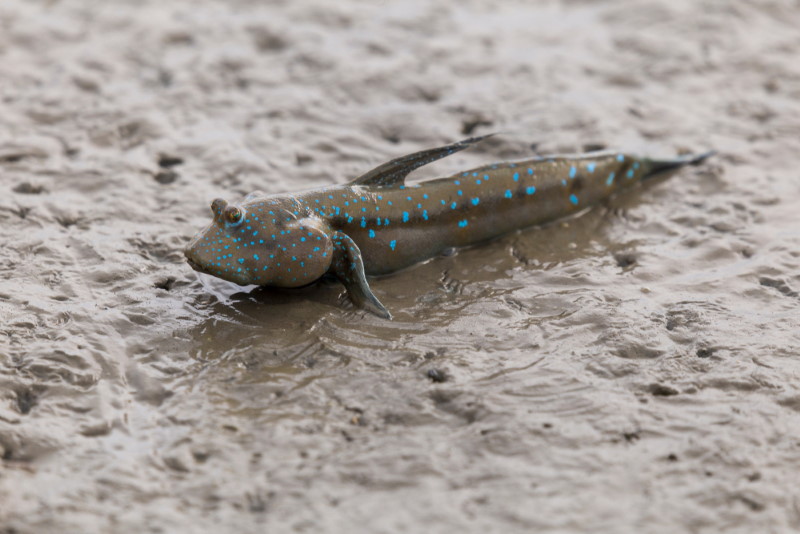 Almost everyone will recognise a mudskipper when they see one: they are the creature most commonly depicted when evolution is discussed, especially the part where ‘some fish left the water, learned to breath and grew limbs’. Of course, evolution is not quite that neat and tidy and we are not actually descended from mudskippers – but as an analogy it works fine. These small but feisty creatures can bury themselves in wet mud, and manoeuvre themselves along using their fins and tails to ‘skip’ along the damp sand or muddy surface – hence their name! they have bulging eyes which they can use to watch above and below the surface of the water at the same time, a very useful trick indeed! They can also climb rocks and trees and jump as high as two feet off the ground should they need to. 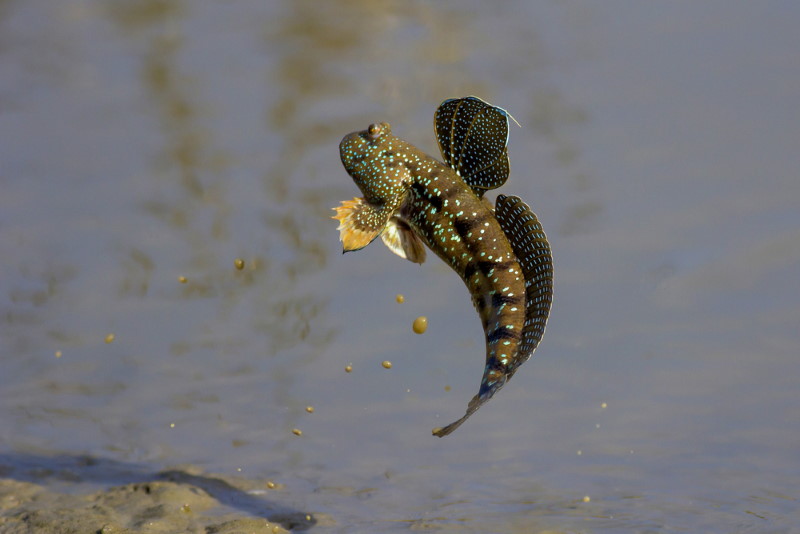 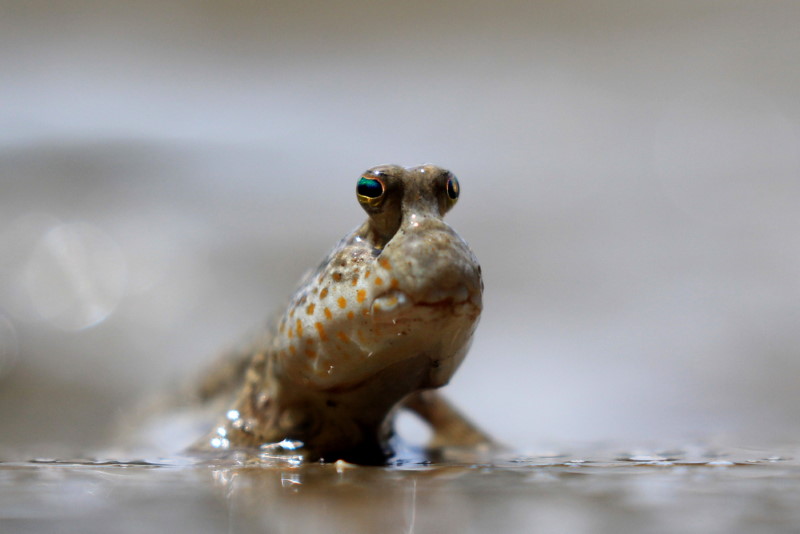 Quokka – Top 10 Facts about the cutest animal on the planet