What would video games be without their ridiculous weapons? If there’s one thing that video game developers just love outdoing each other with it’s offering their players a dazzling array of over-the-top weaponry. It doesn’t matter if it’s a gritty shooter, colourful platformer or even a cartoony kart racer, some video games just wouldn’t be worth playing if not for the creative and downright entertaining arsenals they have on offer. 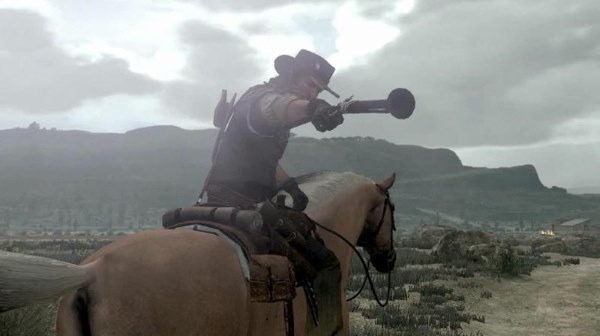 It may be painfully slow to reload and pretty useless for shooting at a target which is more than 10ft away, but the blunderbuss is one gun you really don’t want to be on the wrong end of. Introduced in the Undead Nightmare DLC for Red Dead Redemption, protagonist John Marston jokes that, even in 1911 when the game is set, the blunderbuss is considered to be something of an antique (the rifle had been replaced by faster firing and more reliable firearms by the mid-19th century). However, the gun packs a serious punch and it will literally reduce enemies to a red cloud of bloody dust if they get close enough to be in its range. Thankfully, Undead Nightmare features lots of shambling zombies, so it’s the perfect killing ground for the powerful high-calibre weapon. 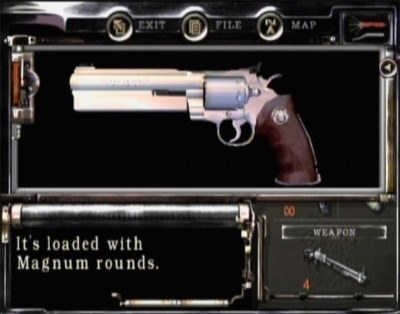 Despite being almost 20 years old, the original Resident Evil still has some of the most satisfyingly powerful weapons found in a video game. Although the shotgun and grenade launcher do some pretty pleasing damage to the zombies, hunters, tyrants and other horror nasties lurking around the mansion where the game is set, none of these weapons are as gratifying as the Colt Python. Ammo for the Python (which was renamed the Magnum Revolver in the HD remake) is very scarce, but this is to balance out the fact that the gun is massively overpowered. The Python inflicts huge amounts of damage and it can explode a zombie’s head like a pumpkin with just one bullet. You might not get the opportunity to use it often but when you do it’s definitely worth it. 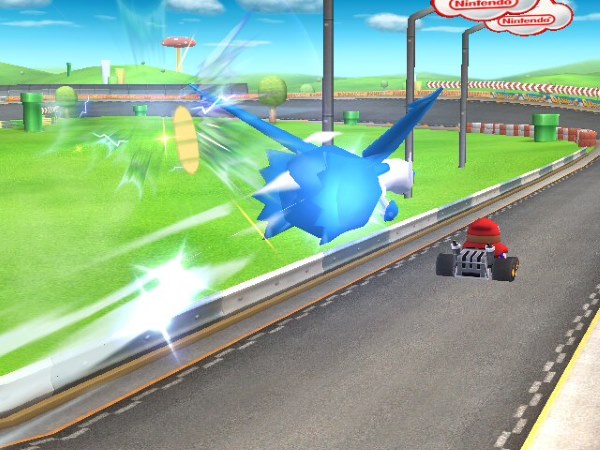 There are few things more infuriating in a video game than being in first place in Mario Kart and seeing the dreaded blue shell warning pop up on your screen. Effectively a homing missile which will fly across the entire track and target whoever is in first place, the blue shell is usually awarded to stragglers all the way at the back to give them more of a fighting chance. But the reality is that no player in last place is ever going to be able to claw their way up to the top, blue shell or not. However, at least they get to annoy whoever is about to win the race with this trusty, overpowered shell. 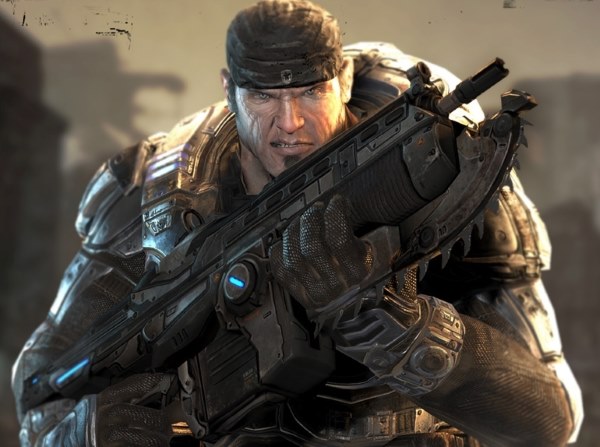 The testosterone-filled Gears of War series is known for being completely over the top when it comes to its weaponry, but nothing can beat its iconic ‘reimagining’ of melee combat. The Mk 2 Lancer Assault Rifle packs some pretty decent firepower for mowing down the alien locust hordes, but it’s even better when you get up close and personal. The Lancer has a chainsaw on the underside of its barrel and players can rev up the bayonet and cut through enemies one at a time with this crazy attachment. Of course, the whole thing throws logic out of the window, but the execution animation for a well-timed chainsaw kill is satisfying gory and ludicrous. 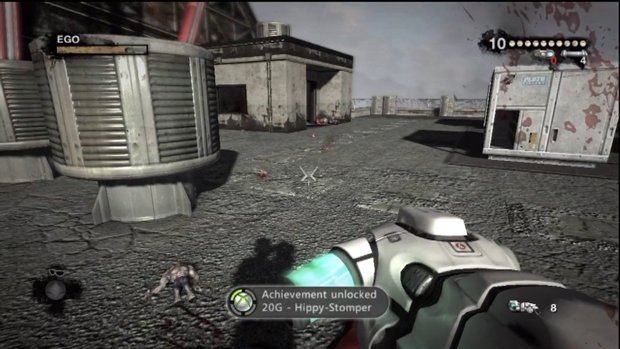 When you’re taking on invading aliens and mutant pig cops, it’s only fair that you steal some experimental extra-terrestrial weapons to level the playing field. Duke Nukem 3D introduced some pretty revolutionary gameplay techniques with weapons like the Holoduke (a hologram of Duke which distracts enemies) and the laser trip bomb, but the shrink ray was Duke’s ace in the hole. One shot from the shrink ray reduces any enemy (aside from bosses) into a pint-sized version of themselves so Duke can squish them into a puddle of blood with his trusty boot. The shrink ray sounds like a gag weapon, but it’s probably the most devastating gun in the entire series. 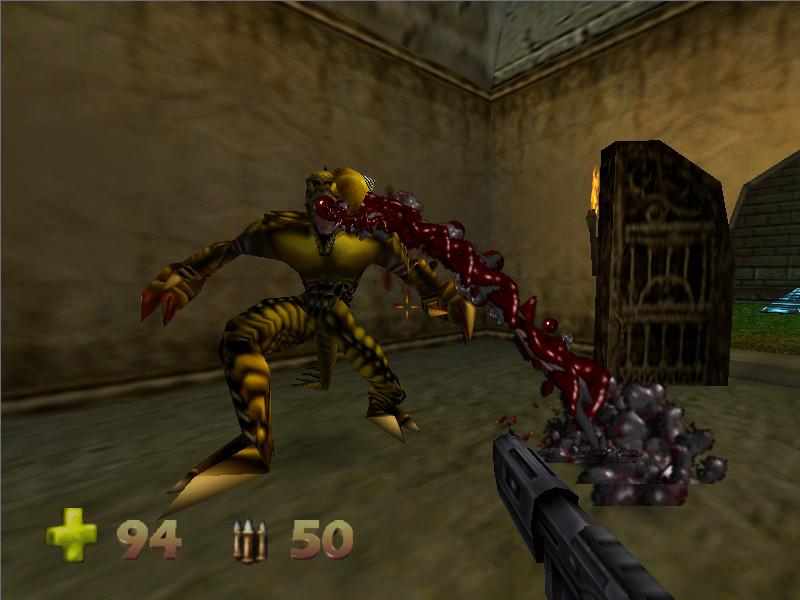 The Turok series is an underrated entry in the first person shooter genre and the games have largely been forgotten about thanks to an influx of flashier-looking shooters which deal with modern warfare rather than dinosaurs. Nevertheless, Turok holds a special place in the hearts of gamers who have fond memories of using some pretty crazy weaponry to take down dinosaurs, poachers, demons, insects and other weird foes. The series was always surprisingly gory with its arterial blood sprays and dismembered limbs, but the Cerebral Bore took the games to new levels of grossness. The spinning projectile has to lock on to enemies before it can be launched, but when it finds an enemy target it attaches to their skull and sucks their brains out. The Cerebral Bore sprays out what can be best described as ‘brain stew’ onto the ground as its unlucky victims have their skulls completely drained, but the weapon does grant some mercy by exploding the recipient’s head after a few seconds of gruesome brain-sucking . 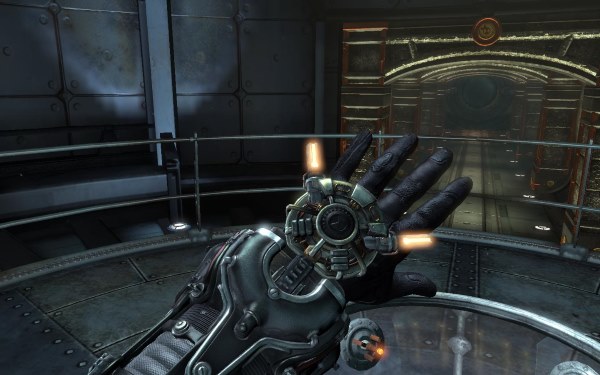 Singularity was another underrated shooter which didn’t receive enough credit for trying to bring something new to the genre. In the game, players are strapped with an experimental weapon called the Time Manipulation Device (TMD). The TMD can be used to manipulate the game’s environment and is typically needed to solve puzzles by restoring destroyed or dilapidated objects to their previous state. It’s an interesting feature, but the TMD is really at its best when it’s used as a weapon. The TMD can kill enemies by rapidly aging them in the space of a few seconds, so by the time they hit the floor they are nothing more than a skeleton. It can also encase enemies in a time bubble called a Deathlocks. This slows everything down inside the bubble but players can still manipulate the environment inside and out. This means you can run around spraying bullets at the Deathlock and, when the bubble finally closes, they’ll all hit the enemy at once in a huge wave of destructive mayhem.

3. Pretty Much Everything – Dead Rising Series 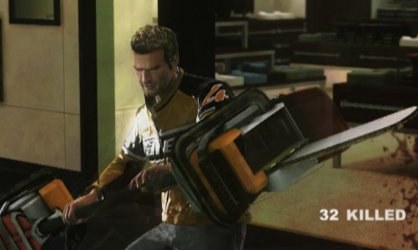 Open-world zombie brawler Dead Rising features the craziest and most in-depth weapon crafting system found in any video game. Players can strip down and combine a huge selection of seemingly everyday items to create bizarre weapons of destruction. For example, you might think that a chainsaw is a good weapon against the zombie hordes, but is it better than two chainsaws connected in the middle by a rowing paddle? Or how about some super powered boxing gloves hooked up to a motorcycle engine? There’s really nothing else quite like the zombie-bashing weapon choices available from the Dead Rising series. 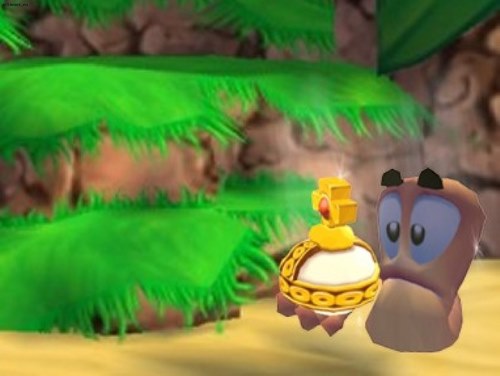 Forget about modern multiplayers; no game had the ability to end friendships and create enemies quite like the turn-based artillery combat series Worms. Another series of games which featured an array of bizarre firearms and projectile explosives, even the jokiest-sounding weapons had strategic purpose and required considerable skill to use effectively. Seemingly normal weapons like shotguns, cluster bombs and air strikes could be used alongside much weirder things like exploding sheep, old women and banana bombs. However, the one weapon every Worms fan has fond memories of is the Holy Hand Grenade. Inspired by Monty Python and the Holy Grail, this special bomb is a chunky gold grenade with a crucifix on top. When it’s thrown at an enemy and the countdown reaches zero, a quick snippet of “Hallelujah” sings out before the grenade explodes and causes devastating damage. It may seem like a gimmicky weapon, but the Holy Hand Grenade was one of the most powerful explosives in the early Worms games. 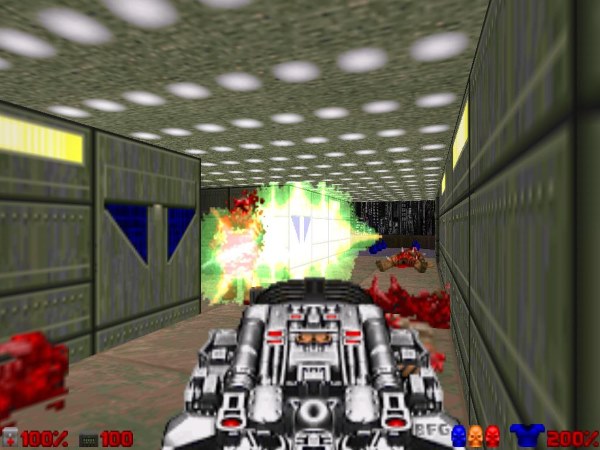 It just doesn’t get much bigger and better than the BFG from Doom. An abbreviation for ‘Big Fucking Gun’ (disappointingly renamed the ‘Bio Force Gun’ in the silly movie adaptation), the BFG shoots out a ball of green plasma which lays waste to even the toughest enemies in the game with just one direct shot. The powerful gun also deals out some pretty decent splash damage (which doesn’t affect the player), so shooting it into the middle of a crowd of demons will result in a fair few of them being reduced to bloody chunks on the floor. More than 20 years have passed since Doom’s release but it’s still the definitive end-game gun, and very few weapons manage to elicit that “Oh yes” response like picking up a BFG for the first time.

Top 10 Most Depressing Visions of the Future in Video Games