This list of the world’s highest waterfalls contains a few surprises. Some of the falls are little known and are rarely visited by tourists, and the highest of all doesn’t really fit with our usual ideas about what a waterfall should be like. Additionally, there is no official definition of a waterfall, nor any consensus about how it should be measured, so there is plenty of scope for disagreement. Some of the falls in this list consist of a succession of cataracts with gentler gradients in between, which arguably makes them a series of small waterfalls rather than a single large one. The difficulty involved in surveying inhospitable terrain also causes problems, and some remote waterfalls in the list are quite recent additions; perhaps there are more waiting to be discovered. Finally, there is an ongoing controversy about the relative heights of numbers two and three in the list, the Tugela and Angel Falls – it is quite possible that the height of the Angel fall was overestimated when it was surveyed in 1949, and that Tugela is in fact higher, which would make Tugela the world’s highest waterfall on land. However, what follows is the generally agreed current list of the world’s ten highest waterfalls, starting from the tenth highest. 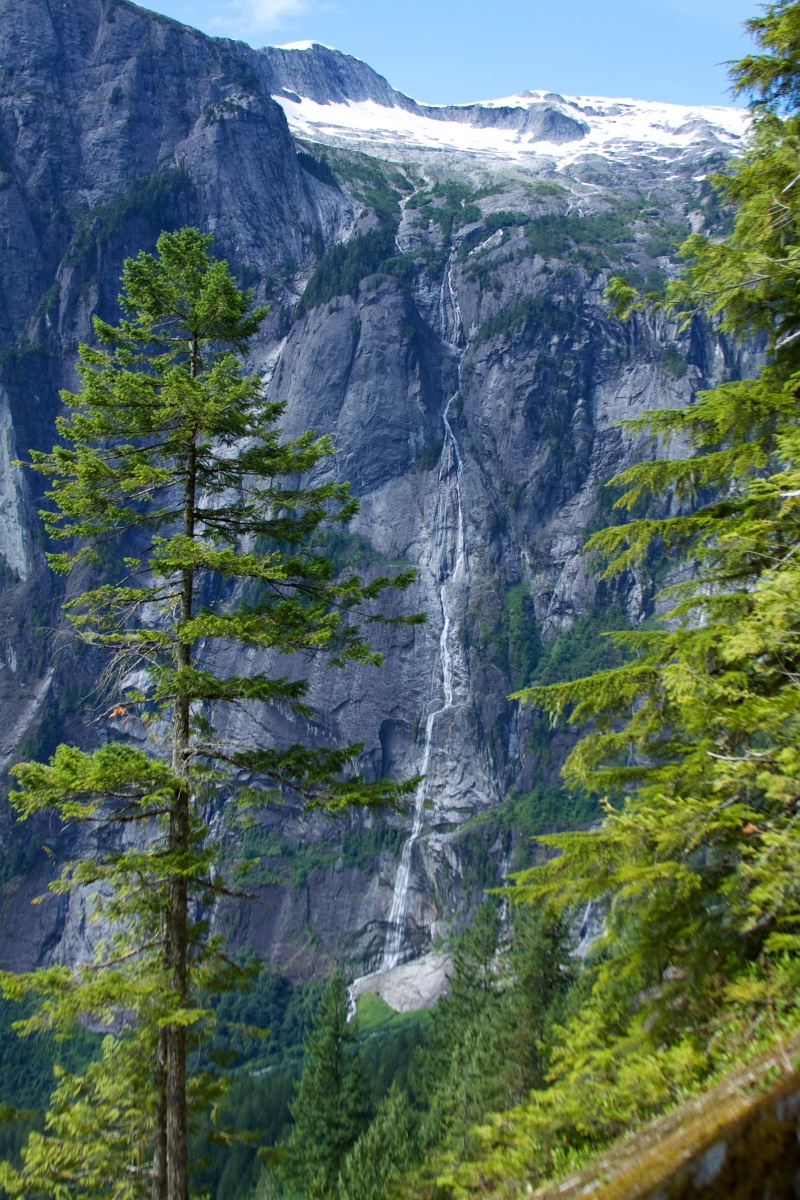 Located in British Columbia, Canada, this narrow torrent is possibly not even the most spectacular waterfall in its locality, the Princess Louisa Inlet area, which also contains the better-known Chatterbox Falls. Although it is very high, James Bruce Falls carries less much water than the Chatterbox Falls, and there is no nearby point from which the entire drop is visible. It does not fall completely vertically, but cascades through a crevice in the rocks. The fall is fed by melting snow, and empties into Loquilts Creek. 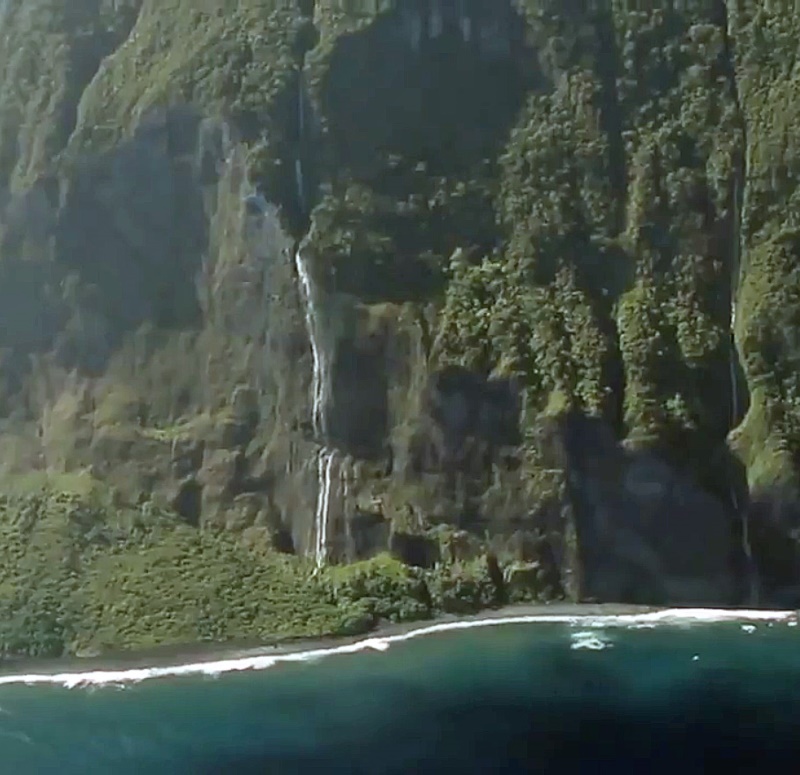 On the stormy north-eastern shore of the island of Moloka’i in Hawaii, this narrow stream pours down the deep fissure it has worn into the sea cliffs, which are among the highest cliffs on the planet. As with the James Bruce falls, there is no convenient vantage point from which the whole of the waterfall can be seen, but tourists can take boat or helicopter trips to see this and other falls in the same cliff. When the wind is strong, spray is blown from the waterfalls high into the air, making a spectacular display.

Fed by melting snow from the mountains, this waterfall in Ulvik, Norway, can reduce to a trickle or even disappear altogether during the summer. It falls from the snowfield into the waters of the Osafijorde. Although it passes through a rock crevice, it can be seen in its entirety from the valley below, and is therefore popular with tourists. 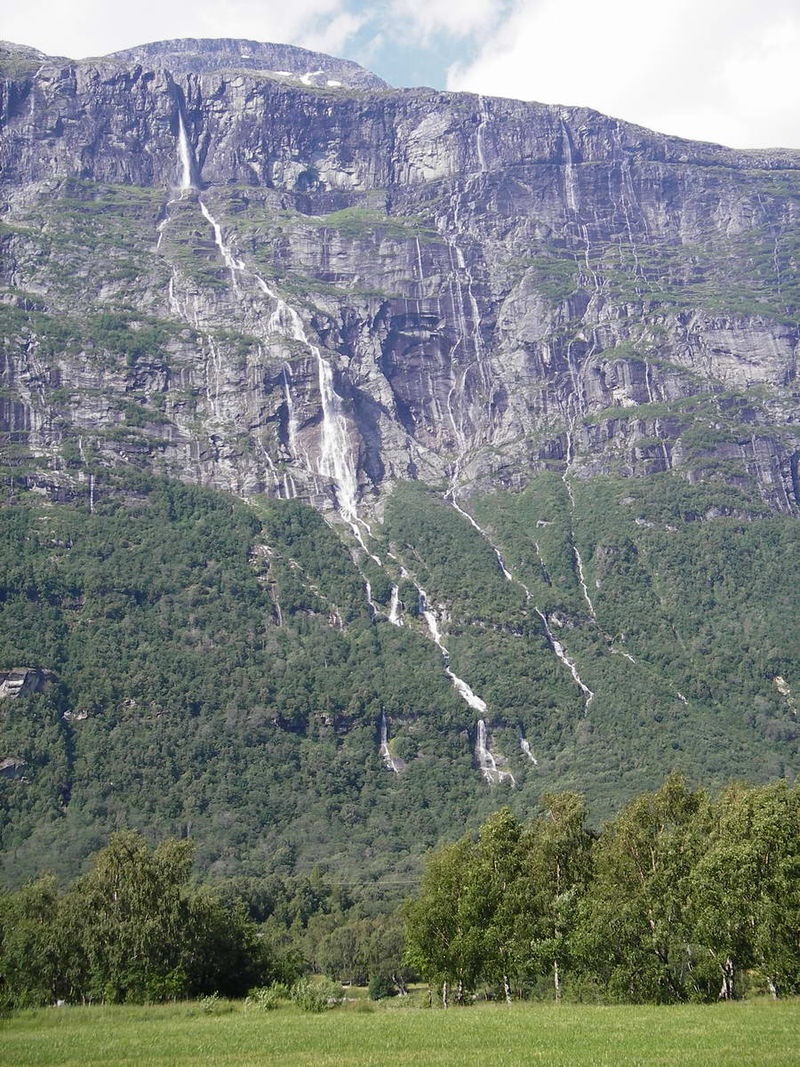 The highest waterfall in Europe is also located in Norway; Vinnufossen is near the village of Sunndalsora in the municipality of Sunndal. The river Vinnu, fed by the melting Vinnufonna glacier, descends from the Vinnufjellet mountain into the river Driva. The waterfall drops vertically at the top, and is then spread across the cliff face in a series of veils, before reuniting in a single stream at the base. 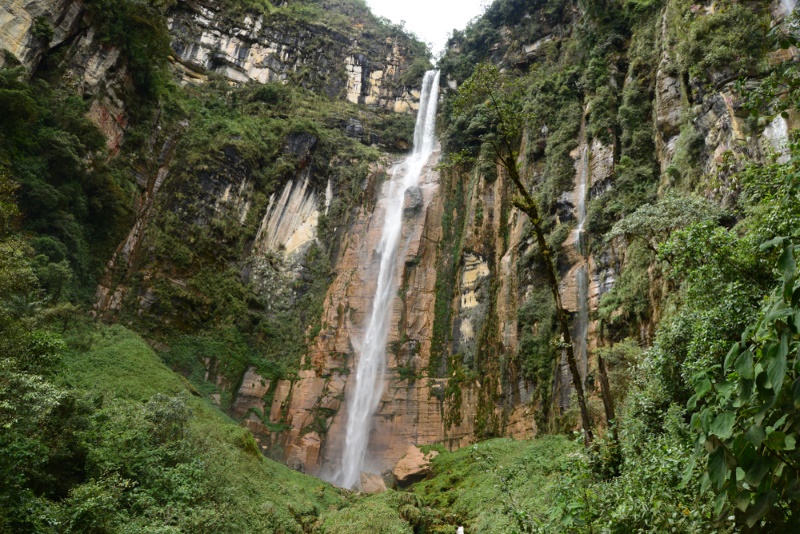 This spectacular waterfall became internationally known as recently as 2007, when it was described by researchers from Peru’s National Geographic Institute. It is situated in the dense forests of the Amazonas region of Peru, in a valley where there are more than 20 other high waterfalls. Yumbilla drops from a plateau in four or five distinct tiers, and can be visited on foot with the aid of a local guide. Its precise height is still a matter of dispute, because of the difficulties presented by the terrain.

Like the Pu’uka’oku Falls described above, this waterfall carries a stream down the fissure it has carved into massive sea cliffs of volcanic rock on the northeastern shore of Moloka’i Island in Hawaii. The stream depends on rainfall, so at dry times of year the waterfall may fail to present much of a display, which is compounded by the fact that it can not be viewed as a whole except from the sea or the air. However, given recent heavy rain and a high wind, as at the Pu’uka’oku falls, tourists may be rewarded by the sight of huge clouds of spray being lifted into the air.

The Spanish name of the waterfall in Ayapichu, Peru, translates as ‘The Three Sisters’. The name refers to the three distinct tiers by which the torrent, formed from a jungle stream, descends into the Rio Cutevirini below. Like the Yumbilla Falls, also in Peru, Las Tres Hermanas were known only to local people until comparatively recently, because of the forested mountain country in which the fall is located. The terrain has also made surveying the falls a difficult task, but their height, and their position in this list, is not now disputed. 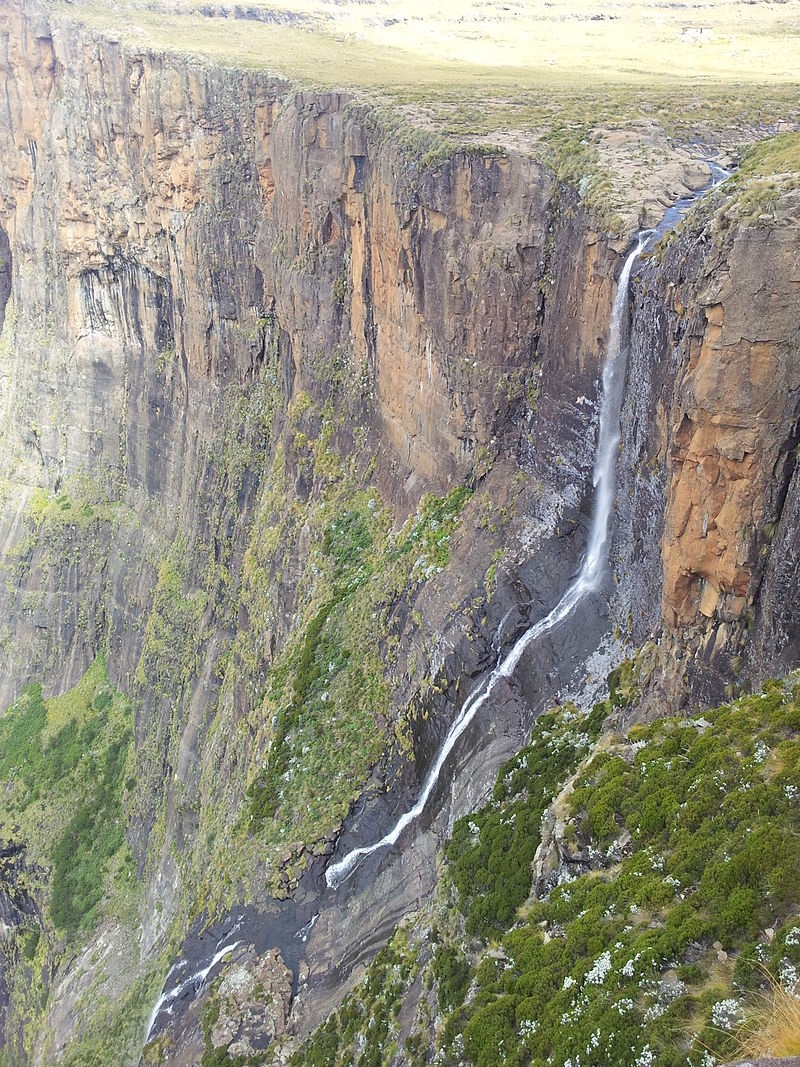 Fortunately, the world’s third highest waterfall, and the highest in the African continent, is not difficult to see. Tugela Falls is in the Royal Natal National Park in the Republic of South Africa, and can easily be viewed from the road into the park. The river Tugela falls in five main tiers from the Amphitheatre escarpment in the Drakensberg (Dragon Mountains) area of the park. At its best after summer rainfall, the waterfall can be reached from hiking trails through the park. Somewhat unexpectedly for an African waterfall, the upper reaches of the Tugela Falls sometimes freeze in the winter, creating an impressive display of giant icicles hanging from the rock face. 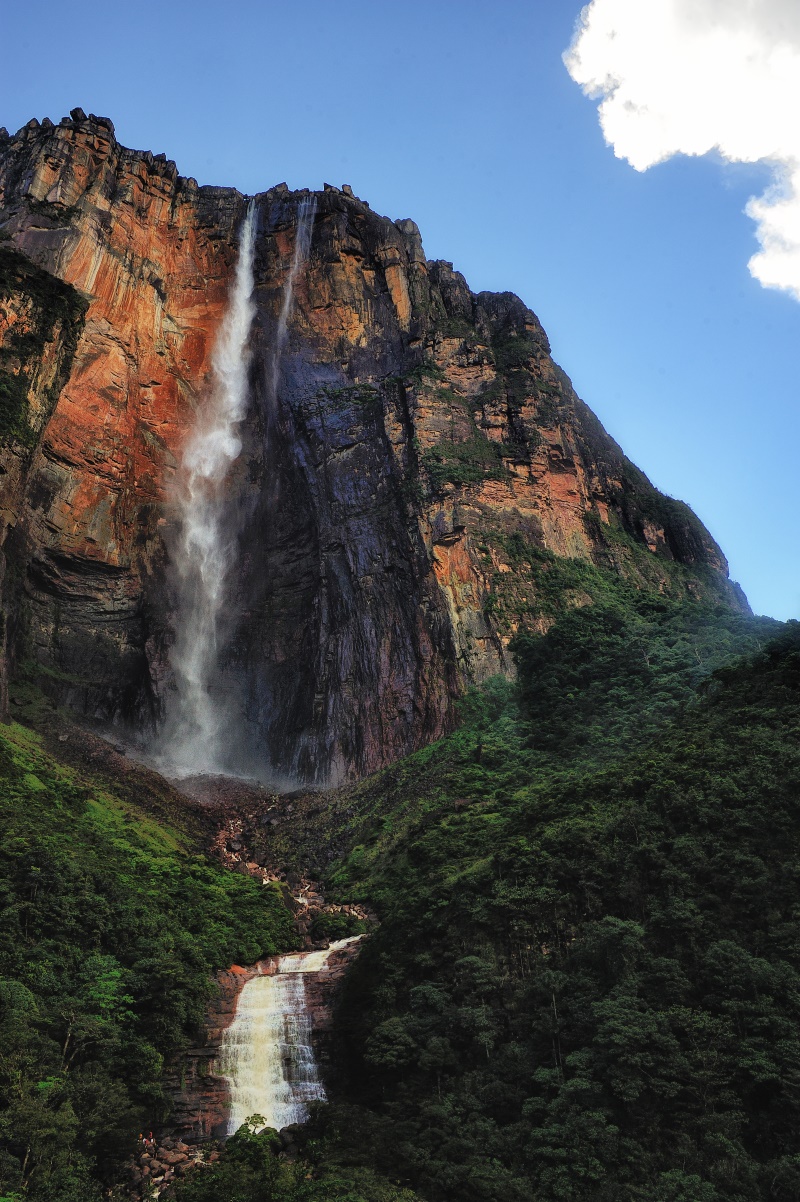 The world’s highest waterfall on land is in Venezuela’s Canaima National Park. The name ‘Angel’ derives neither from the waterfall’s height, nor its unearthly appearance, but from the surname of the American pilot who first flew over it. There have been recent moves in Venezuela to promote its local name in the Pemon language; Kerepakupai Vená, meaning ‘waterfall in the deepest place’. The fall descends near-vertically from a flat-topped mountain, one of several in this area, known in the local language as ‘tepuis’. There is an uninterrupted sheer drop of over 800 metres. This dramatic scenery has inspired many writers and film makers, such as the recent animated film ‘Up’. The fall is best seen from the air, and can be visited by tourists, although the trip is not straightforward and usually takes three days.

Some people might dispute the right of the Denmark Strait cataract to the title of the world’s highest waterfall, as it is entirely situated under the surface of the sea. However, it is indisputable that there is huge downward flow of water involved, caused by the temperature difference between two ocean currents in the strait between Greenland and Iceland, which results in the colder of the two currents falling and then flowing below the warmer. The fall is not only three times as high as the Angel Falls, but also much greater in volume than any waterfall on land. The cataract cannot be seen, and has only been detected with the aid of oceanographic instruments.

Top 10 Longest Rivers in the World