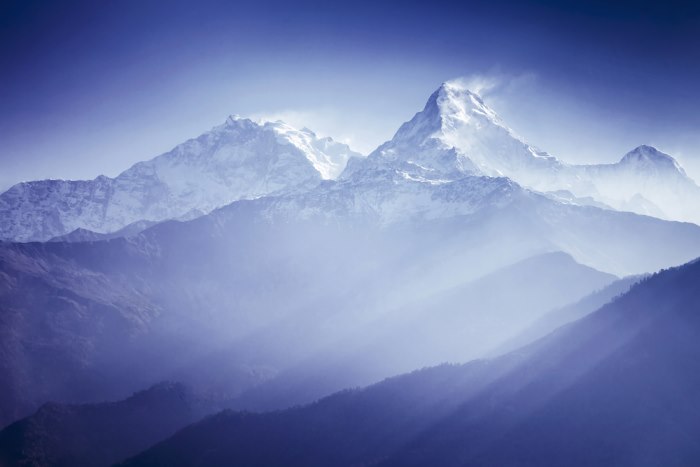 The Annapurna region of the Himalaya Mountains is home to a number of renowned, towering peaks, the tallest being Annapurna I. The western slopes of the mountain are made up of grand glaciers whilst the northern side slopes down into a great gorge. Its name is translated as ‘Goddess of the Harvests’ and was successfully climbed for the first time in June, 1950, by French explorer Maurice Herzog. The south face of the peak was first scaled in 1970, by Don Whillans and Dougal Haston, members of a British expedition. Its reputation is fearsome and, out of all the peaks that reach beyond 8,000-metres, it has the highest fatality rate with 52 deaths during ascent and nine during descent, statistics accurate to 2012. The area is, naturally, a stunning beauty and the Annapurna peaks are close to Dhaulagiri, separated by one of the deepest valleys in the world. 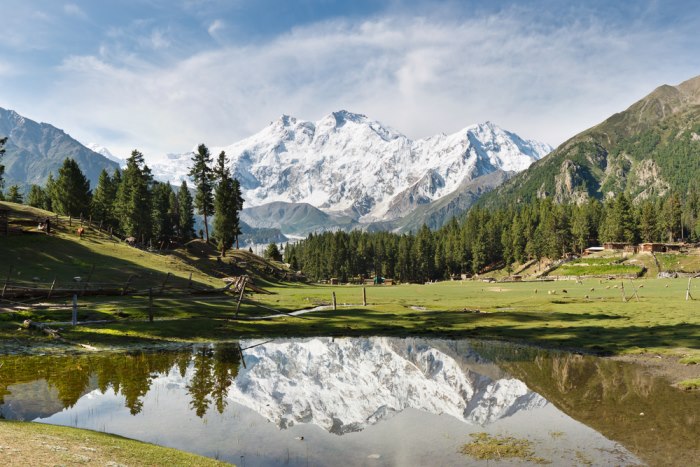 Number nine on the list, Nanga Parbat, lies in the dramatic peaks of the Gilgit-Baltistan region, located in the far reaches of Pakistan. Its rather ominous nickname of ‘Killer Mountain’ reflects its harsh terrain and conditions, a difficult climb by all accounts, and, like K2, has never been conquered during the winter season. The mountain’s southern face, known as the ‘Rupal Face,’ is the world’s highest mountain face and features rocky ridges, hanging glaciers and steep ice drops, helping it attain its ‘killer’ reputation. It has a fatality rate of 22.3% and is considered the third most dangerous peak in the world, but, that being said, the first ascent of the mountain, achieved in 1953, was a solo attempt by Hermann Buhl, who continued his ascent even after his party had turned back. The Base Camp is not considered safe nowadays as much of the region has been taken over by Taliban terrorists. 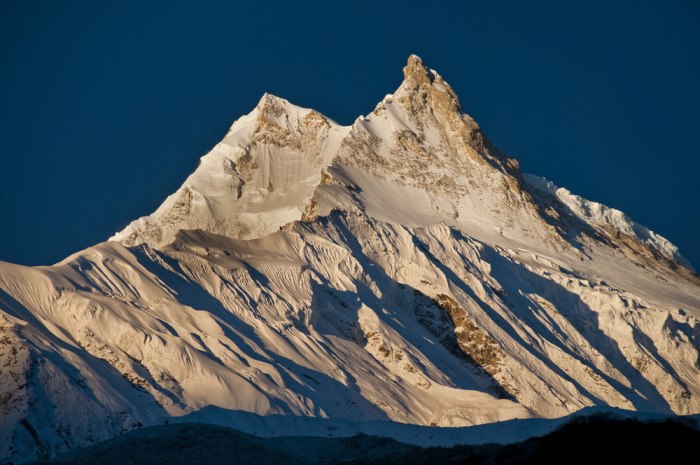 Found in the vast Gorkha area, located in Nepal, Manaslu is considered a wonderful training exercise for those looking to scale Everest. Its name translates to ‘Mountain of the Spirit’ and was first conquered in May 1956 by Gyalzen Norbu and his partner, Toshio Imanishi, a Japanese expedition. It’s considered good for those who wish to practice challenging treks, and, the other peaks in the area, such as Shringi and Langpo, offer some great opportunities for individuals to enjoy the local wildlife and vegetation in the area. Again, it’s one of the most risky mountains, over 8,000-metres, to climb and many are encouraged to avoid scaling the peak in any other month other than April as the ‘monsoon’ season can see a number of poor weather conditions and avalanches. There have been 53 deaths on the mountain, making it the fourth most dangerous of the peaks in the Himalayas. 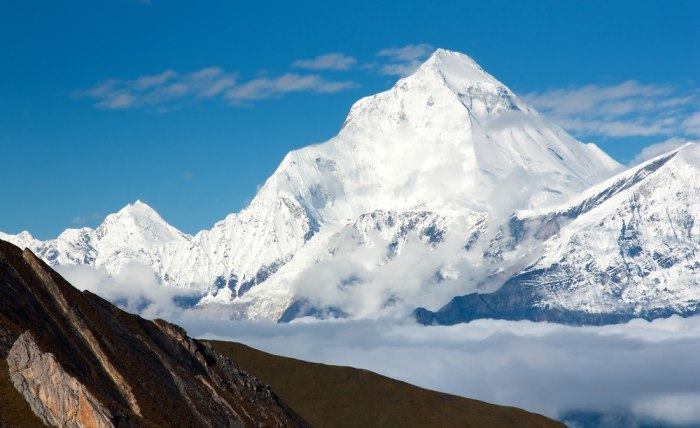 The Dhaulagiri range of the Himalayas lies next to the already mentioned Annapurna range (there’s about 40 miles between them) and is home to Dhaulagiri I, the seventh-highest mountain in the world. In Sanskrit, it translates to ‘White Mountain’ and it’s renowned for its glimmering snow. Many climbers like to begin their trek in the small town of Pokhara down at the base of the Annapurna and Dhaulagiri ranges. It’s one of the easiest ranges to scale, providing the ‘normal’ route is taken, and rises above the Kaligandaki Gorge. The normal route is to follow the northeast ridge, successfully attempted during the first ascent of the mountain in 1960. In 1969, Boyd Everett tried to climb the southeast ridge and he, and his team, were tragically killed in an avalanche. The incident is considered one of the very worst in Nepalese climbing history, sweeping away the 11-man expedition. 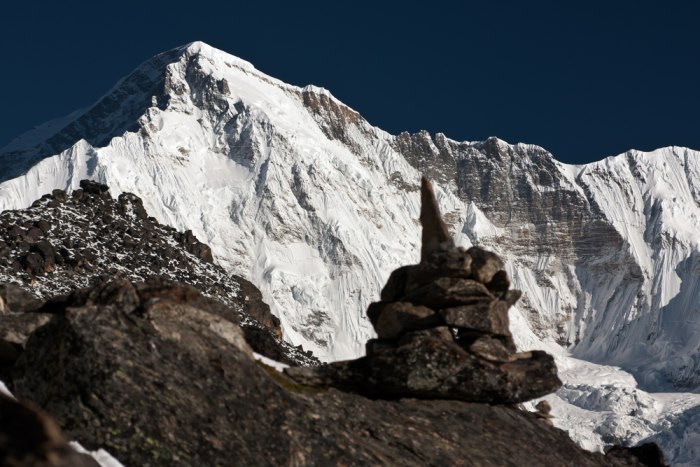 Cho-Oyu, first climbed in 1954, is one of the more renowned members of the Himalayas’ elite mountains, located in the Tibetan Plateau that also includes Everest. Despite this, it’s considered the easiest peak to climb (of all the mountains north of 8,000-metres) due to the moderate slopes on its northwest route, the standard pass for most who wish to ascend the mountain. Known also as the ‘Goddess of Turquoise,’ there are no testing passes that require an extraordinary amount of technical know-how and it lacks many of the obstacles faced on some of the other peaks around. Its abundance of snow makes it a solid destination for skiers and snowboarders and, in 2002, Kristoffer Erickson reached the summit and became the first person to ski down the mountain. It’s one of the busiest peaks, thanks to its relative ease-of-climb compared with others. 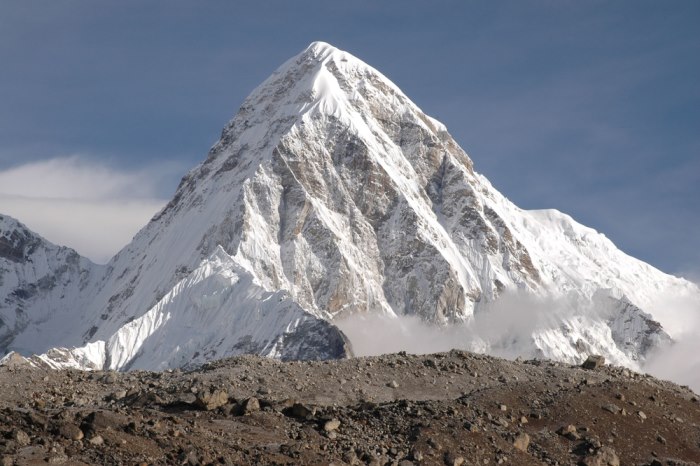 We’ve reached the big boys now and starting our top five peaks is Makalu in Nepal, first conquered in May 1955 by a French expedition including Jean Couzy and Lionel Terray. It sits in the Makalu-Barun National Park and is only 14 miles off Mount Everest. It’s known as a ‘double peak’ as well, with its subsidiary peak, Chomolonzo, lying to the north. It’s a challenging peak, as you may expect from a top-five mountain, with steep slopes, exposed ridges and a difficult climbing experience for those looking to best the four-sided pyramid at the very peak of Makalu. In terms of the peak’s history, only five of the first 16 expeditions to reach the top were successful, underlining its challenging nature and, during the early 21st century, one of France’s top climbers, Jean-Christophe LaFaille, disappeared during an attempted solo climb during the winter. 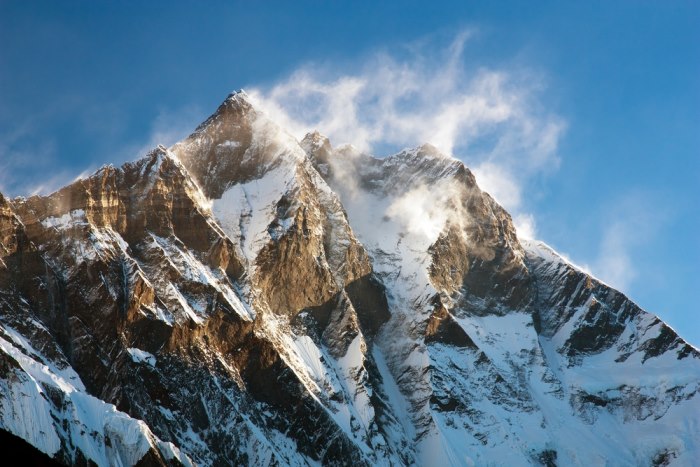 Lhotse is renowned for its connection with Mount Everest and its steep south face is the steepest in the world. It sits on the Nepal/China border and most of the expeditions attempted last around 60 days. It has three summits (Main, Shar and East) and was conquered in 1956 by a Swiss expedition, consisting of Fritz Luchsinger and Ernst Reiss, who then went on to scale Everest, the second group to ever achieve this, completing the duo. The South Face has never been successfully scaled, but, in 1990, Tomo Cesan claimed he had climbed the ridge, a claim strongly refuted by experts, all admitting it would be far too difficult for a solo expedition. It’s down in part to this face, also attempted by a Russian expedition in 1990 without success, that Lhotse is the least-attempted mountain of all those above 8,000-metres. 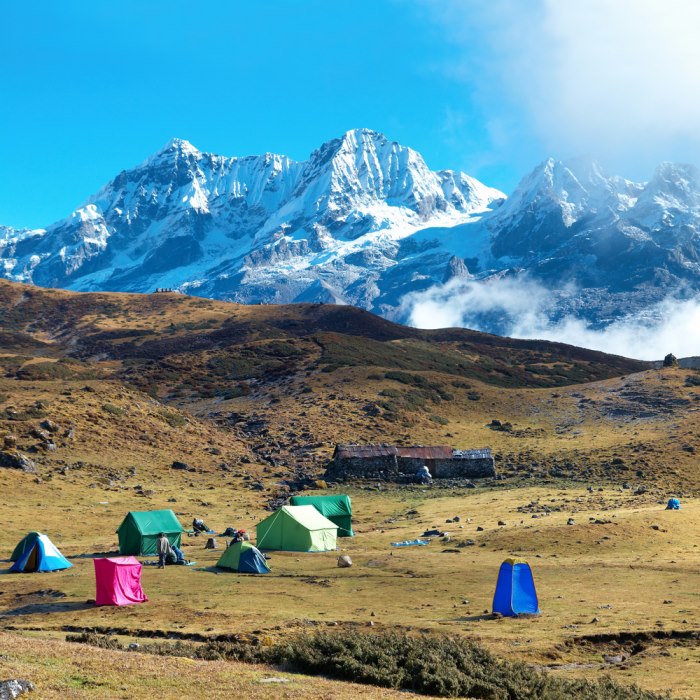 We reach the top three with Kangchenjunga, the elite, and this peak, on the Nepal/India border, is the highest in India and the range consists of five massive peaks, assisting its nickname, the ‘Five Treasures of Snow.’ Its first victors were those on a UK expedition, George Band and Joe Brown, on May 25th, 1955, who took the route featuring the ‘Great Shelf,’ a sloping plateau that is overshadowed by a large hanging glacier. Much of the route is shrouded in snow and ice but during the drier months, some of the path can be a bit rockier. It’s well-documented in popular culture as well and was referenced in Mark Twain’s ‘Following the Equator,’ describing his visit to Darjeeling and the wonder of being a tourist, viewing the peak of Kangchenjunga for the first time without cloud cover obscuring the view. 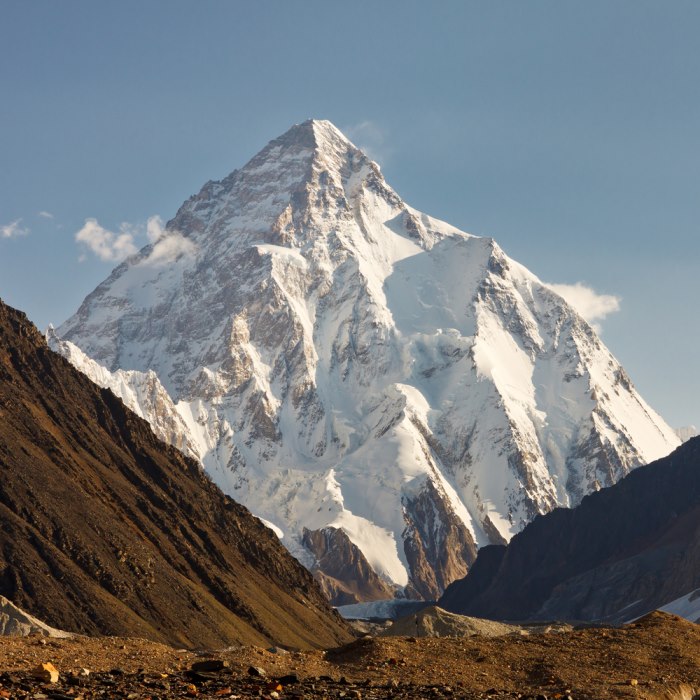 K2 is a worldwide name, considered the hardest peak to climb and definitely the most dangerous of them all. It sits on the Pakistan/China border and was first conquered on July 31st, 1958, by Lino Lacedelli and Achille Compagnoni of Italy. It’s nicknamed the ‘Savage Mountain,’ an ominous reflection of the weather conditions faced by climbers and its notoriously morbid reputation. It involves a lot of technical climbing and features a very high danger in terms of avalanches, with over 75 deaths having occurred during the years. Its popularity has been forever encased in a number of books as well, including ‘K2: The Price Of Conquest,’ written by its first ever conquerors, discussing their famous ascent. It has never been climbed in winter and, for most, the ‘easiest’ route is to take it from the Pakistan side, as opposed to the Chinese face. 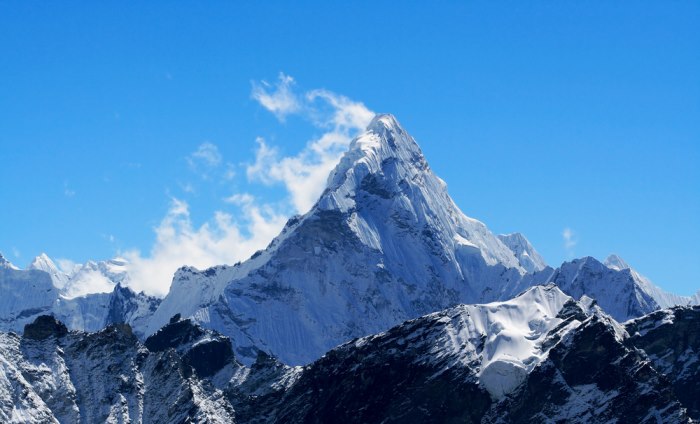 Finally, we reach the big one, Mount Everest, a name synonymous with extraordinary achievement and immense challenge. It was first conquered famously on May 29th, 1953, by Edmund Hillary and Tenzing Norgay. It is the ‘roof of the world’ and is over 60 million-years-old, continuing to grow a quarter of an inch every single year. As one may have guessed, it attracts a large number of potential climbers every year, all eager to best the tallest peak in the world. Another interesting fact about Everest is that, whilst it is the highest point from sea level, Mauna Kea, a volcano in Hawaii, actually stands taller, but begins under the sea and isn’t counted. It goes by a vast array of nicknames, known in Nepal as the ‘Goddess of the Sky,’ whilst in Tibet, it is the ‘Goddess of the Universe.’

Top 10 Highest Mountains in the US

Top 10 Deepest Sinkholes in the World