If you think you know a few things about the world’s highest bridges, you could be slightly out of date; a lot has changed in recent years. An astonishing eight out of the ten highest bridges in the world are in China, and all of these eight were constructed in the last ten years. Incidentally, it’s important to distinguish between a high bridge and a tall one; ‘tall’ refers to the size of the supporting pillars, and ‘high’ means the distance from the deck of the bridge to the ground or water below. The bridges in this list tend to cross deep river valleys, which accounts for much of their height. Here is a list the current top ten, but remember that even bigger bridges are being planned or constructed, so the list will be constantly changing. 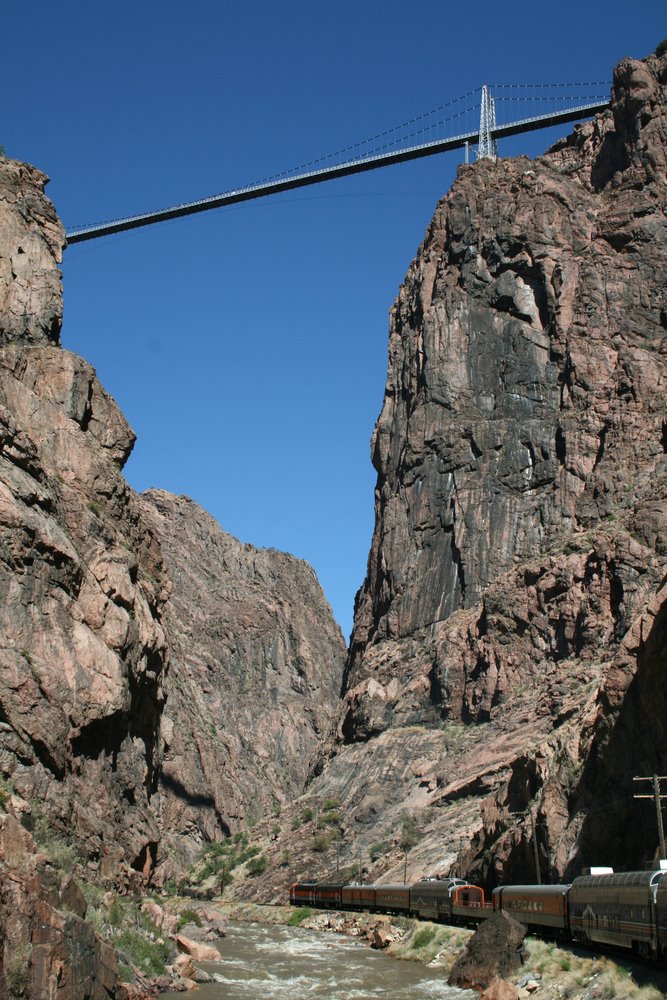 This bridge, the only one in this list in the United States of America, was the world’s highest bridge from 1929 to 2001. The bridge, near Cañon City, Colorado, is 384m long and 5.5m wide, and carries a walkway constructed from 1,292 wooden planks. On June 11, 2013, the Royal Gorge was hit by a wildfire which caused much damage to the surrounding area. The Royal Gorge Bridge itself was lucky to escape with only some minor damage to its wooden planks, but was closed for repairs. 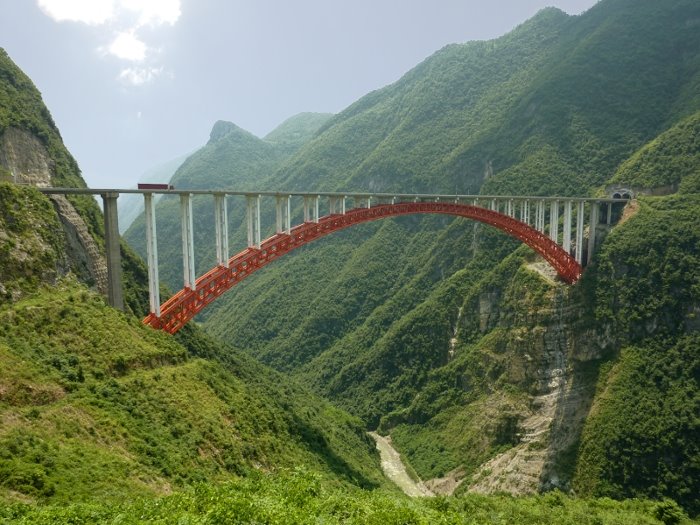 This is the world’s highest arch bridge. 294m high, in the Three Gorges region of China, it carries the Shanghai–Chongqing Expressway over the Zhijinghe River, a northern tributary of the Qingjiang River, between the towns of Yesanguan and Dazhiping. It is also one of the world’s longest arch bridges, at 430m. It is only 15km away from the world’s highest bridge, the Sidu River Bridge, which is at the top of this list. 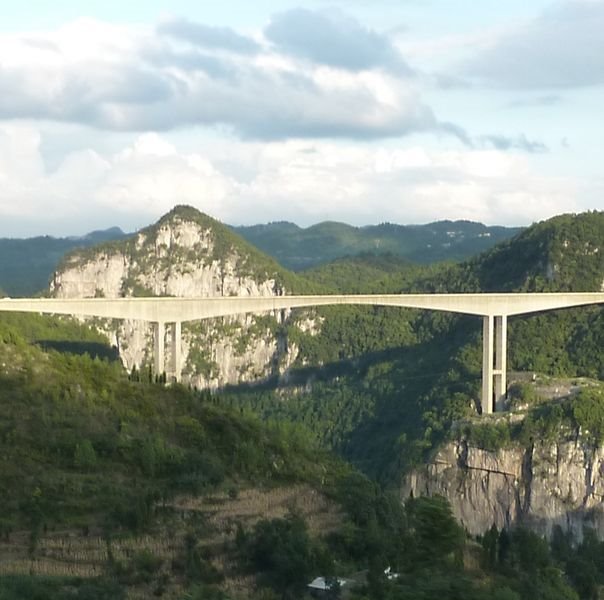 This 305m high bridge at Liu Guangzhen, Guizhouhou, China was the world’s highest bridge from 2001 to 2003, and is still the highest beam bridge. It carries China’s National Highway 321, which has been recognized as the road with the most bridges in the world by the Guinness Book of World Records, having a total of 151 bridges, almost one bridge per kilometre. 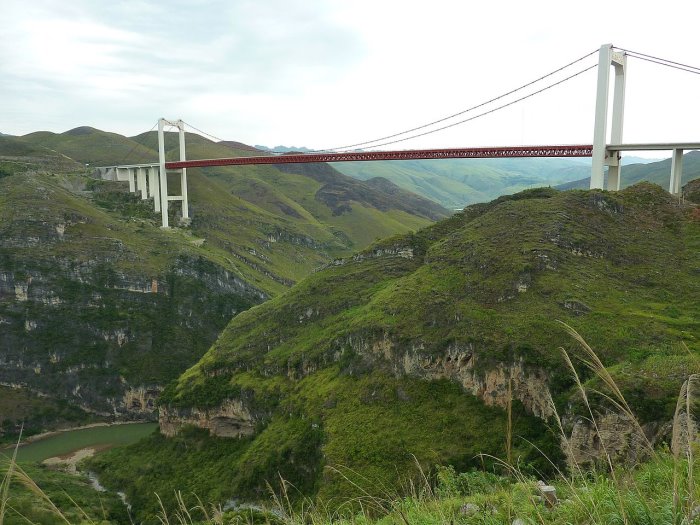 This suspension bridge is another of the three record-breaking bridges across the Beipanjian River. The 2009 bridge carries the Shanghai–Kunming Expressway near Qinglong in the Anshun Prefecture of the Guizhou Province of China. The bridge has a length of 636m and a height of 318m. It opened in November 2009. 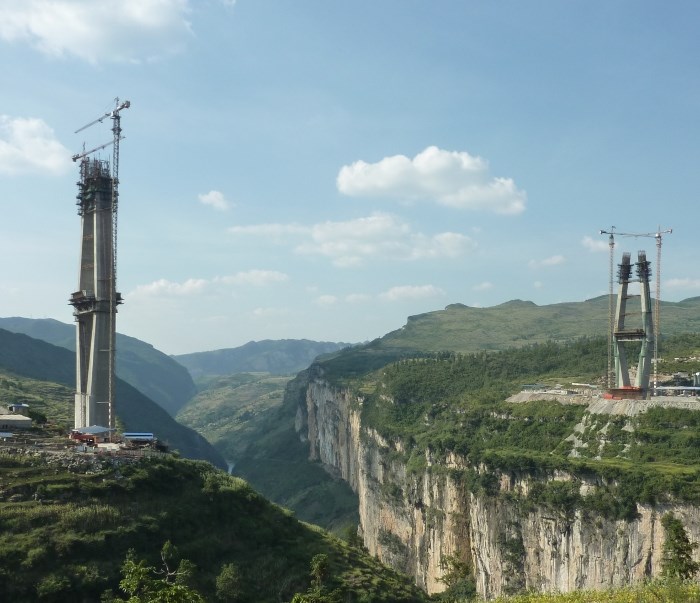 Liuchonghe Bridge is a cable-stayed bridge near Zhijin, Guizhou, China and is 336m high. The bridge is part of the Xiamen–Chengdu Expressway between Bijie and Guiyang. It crosses the Liuchonghe River, a tributary of the Wujiang River which has more high bridges across it then any other river in the world, with the single exception of the Beipanjiang River, which has two bridges in this list On the north east side of the canyon is a nearly vertical cliff wall over 150 meters high, making this bridge spectacular sight. 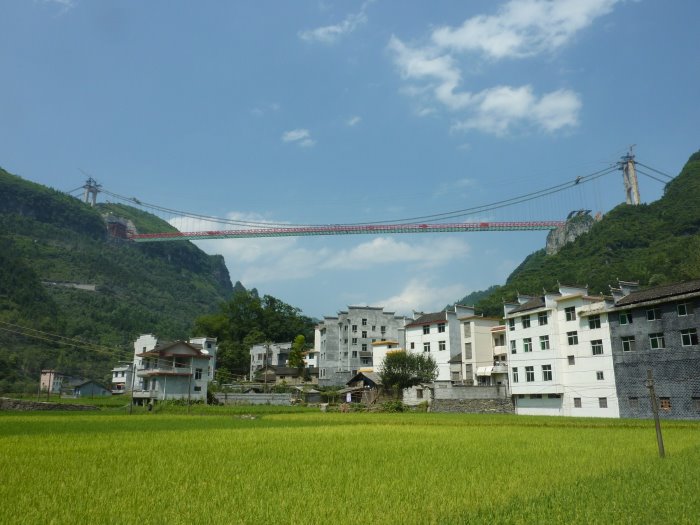 This suspension bridge is the world’s highest and longest tunnel-to-tunnel bridge; it links two tunnels 1,176 metres apart, 355 metres above the bottom of Dehang Canyon in Hunan province, central China. Construction began in October 2007 and was completed by the end of 2011, ahead of schedule. It was formally opened to traffic in March 2012. 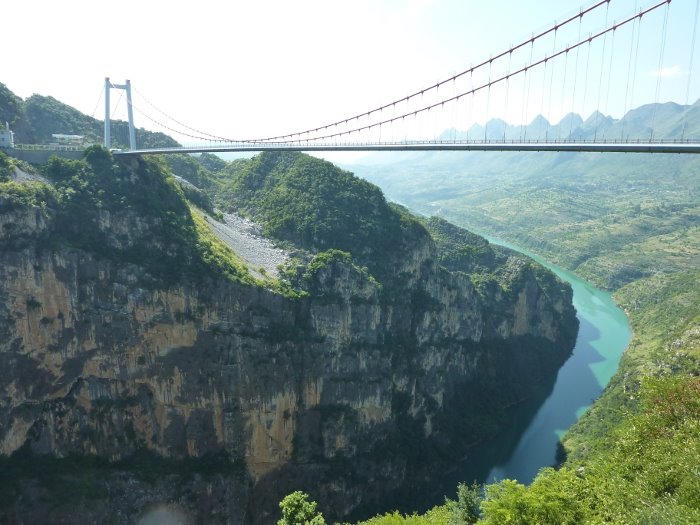 This was the world’s highest bridge from 2003 to 2005, and is one of three bridges across the same river to have held records in recent years, including the railway bridge which remains the highest railway crossing on earth. (A higher one is expected to open in India in 2015.) A fourth bridge over the Beipanjiang is planned, to take a highway between Kunming and Bijie. The Beipanjiang bridges are known by their dates of opening, to avoid confusion. 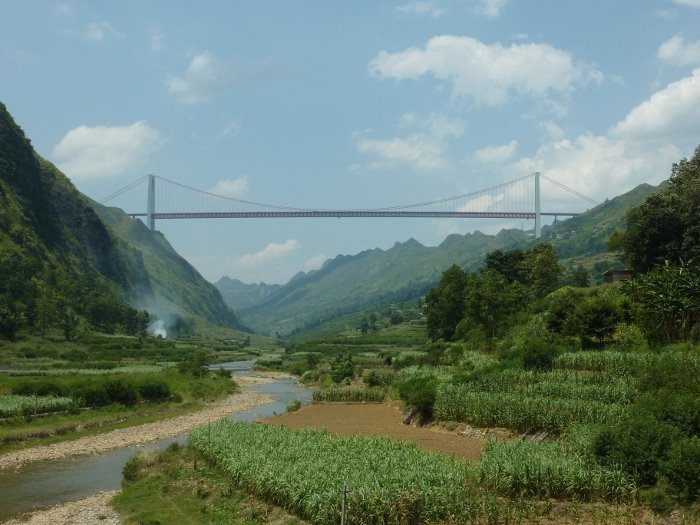 The Balinghe (or Baling) River Bridge is a single-span suspension bridge in Guanling County in the Guizhou Province of China. It has a main span of 1088m. In 2012 it hosted a gathering of 30 base-jumpers from 15 countries, all keen to jump the 375 metres into the Baling gorge below. Base-jumping from China’s spectacular new bridges has become a popular sport in the past few years.

This Mexican bridge is the highest cable-stayed bridge in the world, and one of only two members of this list located in the Americas. It was named to commemorate the 200th anniversary of Mexico’s independence from Spain. It carries the Mazatlán-Durango highway over a deep ravine, replacing a dangerously winding road, the “Devil’s backbone”, across the Sierra Madre. The new highway includes 63 tunnels and 32 bridges in total, and cuts the travel time between Mazatlán and Durango from 8 hours to less than 3 hours. 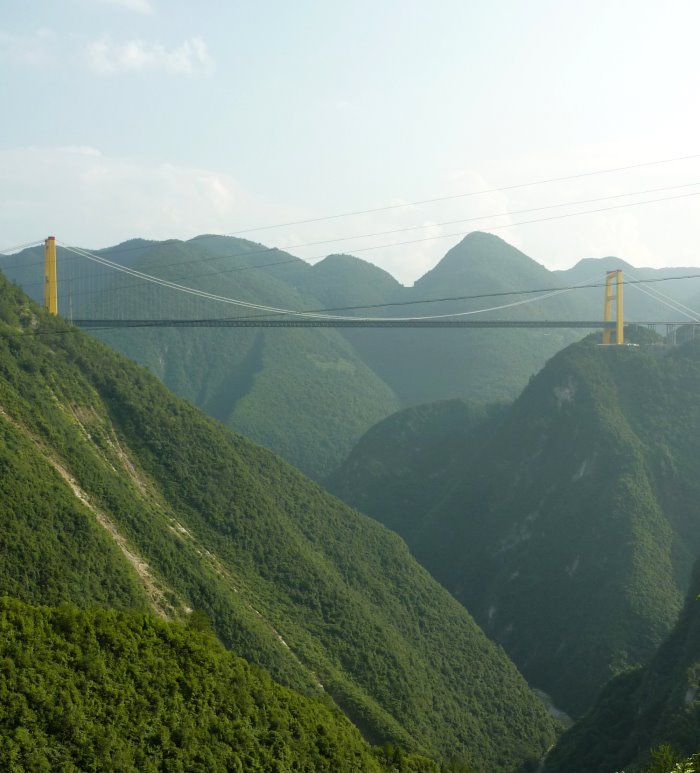 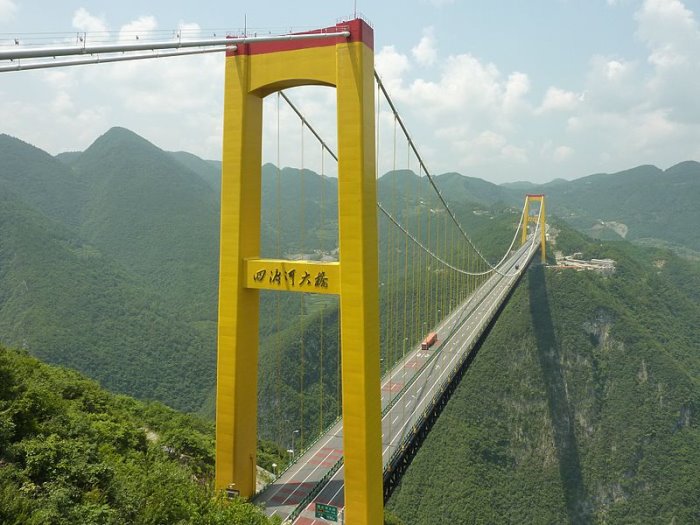 The world’s highest bridge since its construction was finished in 2009, the Sidu River Bridge is a 1,222 metre long suspension bridge across the Sidu (or Siduhe) River near Yesanguan in the Hubei Province of the People’s Republic of China. Construction started in 2005, when two pilot cables 980 meters long were successfully fired by rocket, the first time this had been done. Most of its height of this bridge, like others in this list, comes from the very deep gorge it spans.