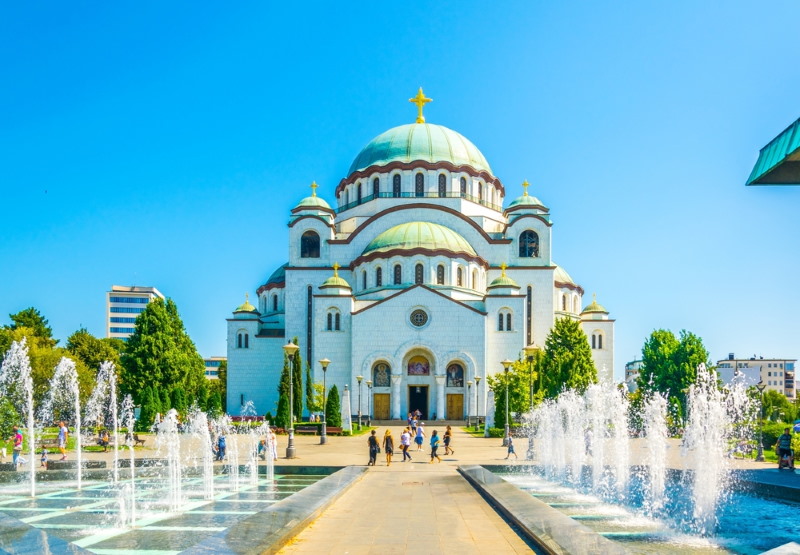 This Orthodox basilica (technically not a cathedral) is the world’s largest Orthodox Church. Construction began in 1935, and it is not yet finished, with large-scale mosaics still planned for the interior. The basilica is constructed in the form of a Greek cross, on the site where it is believed that the remains of St. Sava, the founder of the Serbian Orthodox Church, were buried. The cathedral is built in the Serbian-Byzantine style, and is 70 metres tall at its highest point. It can accommodate 10,000 worshippers.

9. Basilica-Cathedral of Our Lady of the Pillar – Zaragoza – Spain 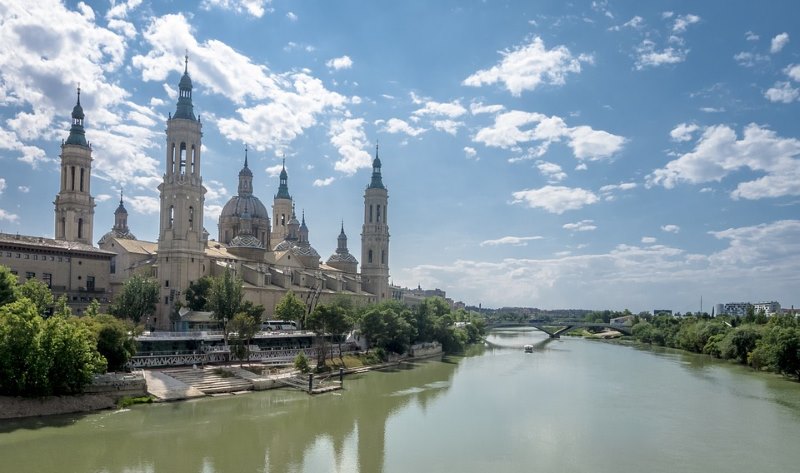 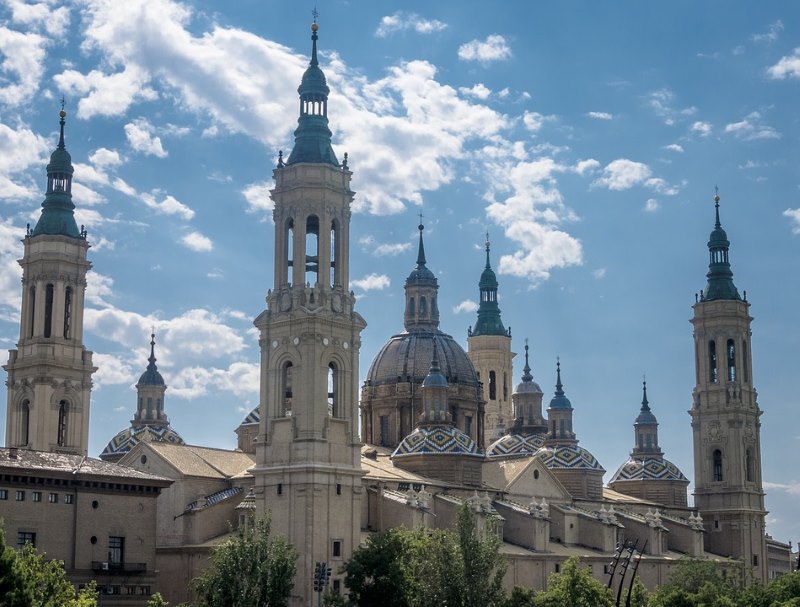 This cathedral was built between 1681 and 1686 on the orders of King Charles II of Spain, and later remodelled in the Baroque style. It replaced a series of earlier churches on the site, the first of which is believed to have been a tiny chapel constructed by St. James himself, when he saw a vision of the Virgin Mary whilst praying on the banks of the River Ebro. St James is traditionally thought to have brought Christianity to Spain early in the first century AD. The cathedral, 130 metres long by 67 wide, has large corner towers and ten brightly coloured cupolas surrounding a central dome. The Spanish artist Goya painted the frescoes decorating two of the cathedral’s vaults, close to the Holy Chapel which houses the image of the Virgin Mary. Three bombs dropped on the cathedral during the Spanish Civil War failed to explode, which has been seen as evidence of divine protection.

8. Church of the Most Holy Trinity – Fátima – Portugal 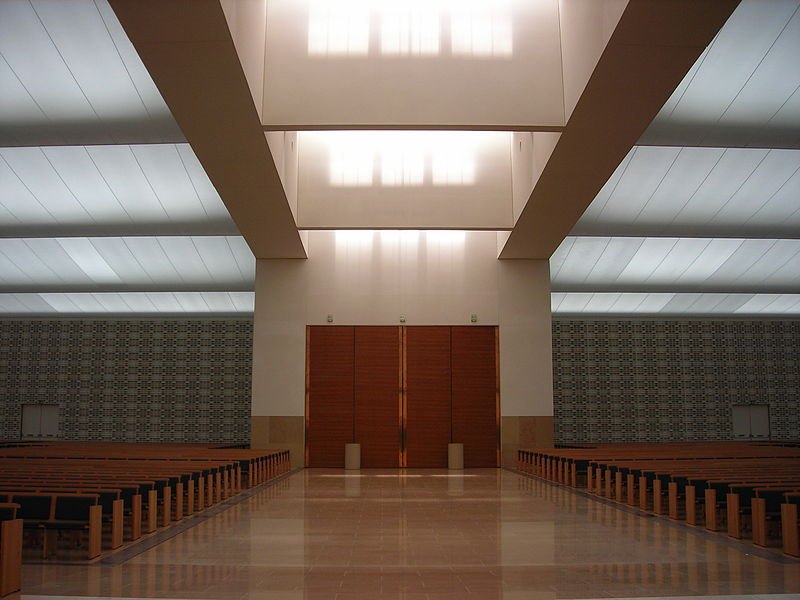 Fátima in Portugal has been a centre for pilgrimage since 1917, when three children saw visions, first of an angel, and then of the Virgin Mary. The Church of the Most Holy Trinity, a basilica in the modern style, was built to accommodate pilgrims at the shrine. The first church on the site was consecrated in 1953, but quickly ran into problems with the number of pilgrims attending. The first stone of a new church was blessed and donated in 2004 by Pope John Paul II, from a marble fragment of the Apostle Peter’s tomb, and the new basilica was consecrated in 2007. The building, which has won awards for its innovative architecture, is built partially underground in order to disguise its size, but it can accommodate a seated congregation of nearly 9,000 pilgrims, and is designed to meet the needs of disabled people. 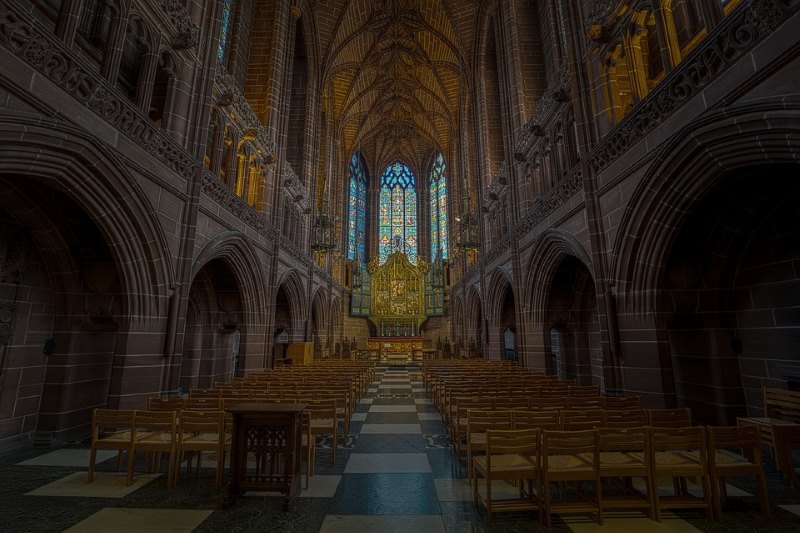 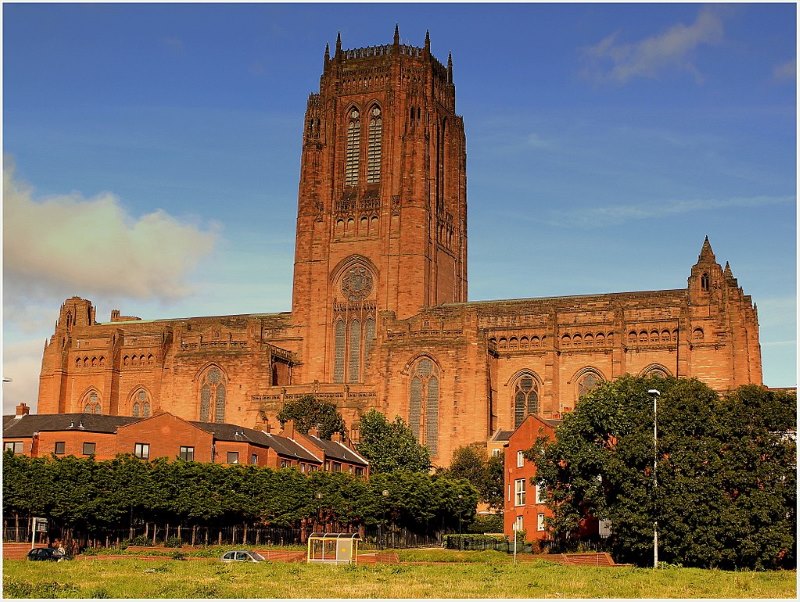 This massive building is one of two cathedrals in Liverpool, the other being the Roman Catholic ‘Wigwam’. (The two cathedrals are linked by Hope Street.) The Anglican cathedral is the largest church in Britain. A competition was held to design the new building in 1901, and the surprise winner was Giles Gilbert Scott, then only 22 years old, and without any completed projects to his name. The Lady Chapel, the first part of the building to be completed, was consecrated in 1910, but the cathedral was not finished until 1978. The final completion of the building was marked by a ceremony which was attended by Queen Elizabeth II.

Naturally, most large churches are in big towns and cities, but this one is located in a small village. It was built to commemorate a miracle; in 1813, a Polish soldier fighting in Napoleon’s army was seriously wounded, and had a vision of the Virgin Mary. She promised him that he would recover and return to Poland, but that he must place an image of her in a public place. The image he commissioned when he arrived home became an object of pilgrimage, and pilgrims paid for the construction of the basilica, which began in 1994. The church is Poland’s largest, having a nave which is 120 metres long and 77 metres wide; the dome is 98 metres high. 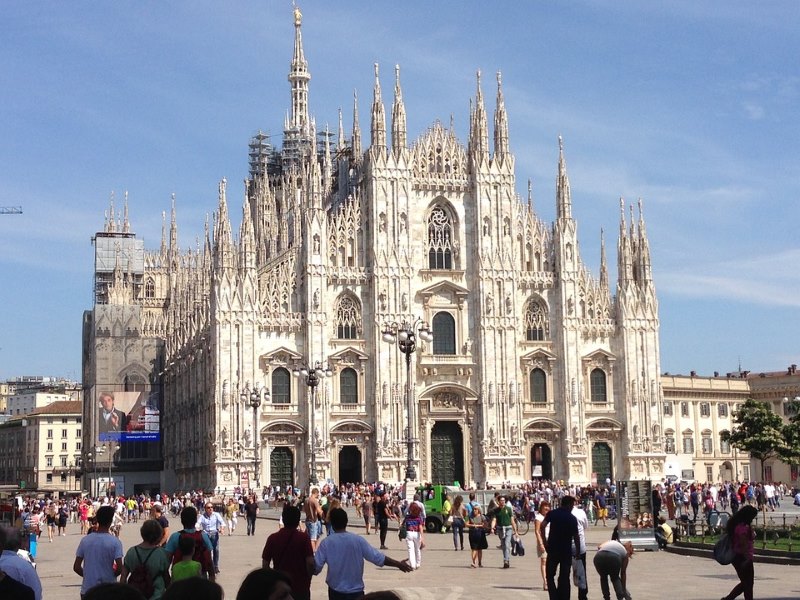 Construction of this Gothic cathedral began in 1386 and continued for nearly five hundred years. Remnants of one of the oldest Christian churches in Europe, the old baptistery, constructed in 335, can still be seen under the cathedral. The building project frequently ran into financial problems, and the cathedral was only finished after the intervention of Napoleon Bonaparte, who had invaded Italy and was about to be crowned as its king. He promised to help fund the completion of the facade, and though in fact the funding never arrived, the promise was sufficient to get the work done. In recent years, pollution has taken its toll on the fabric of the building and sponsors are being sought for repairs. 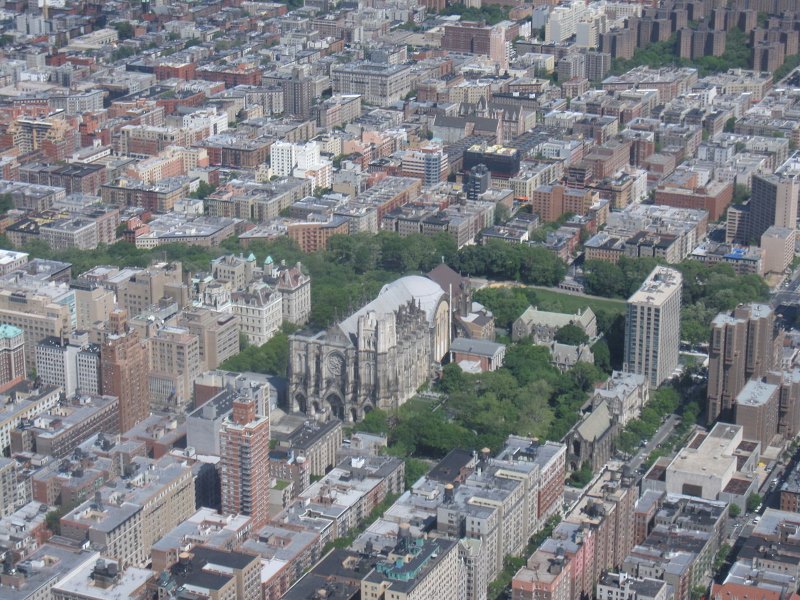 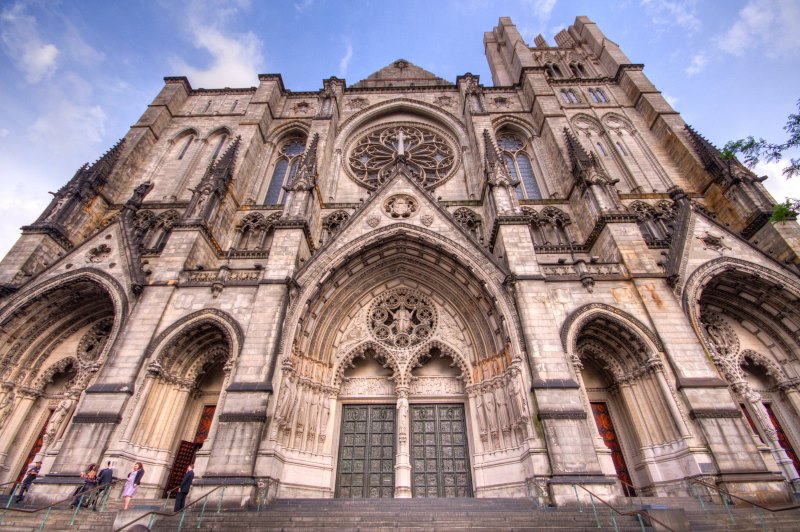 This is the cathedral of the Episcopal Diocese of New York. The interior is 183 metres long and 37 metres high, covering a total of 11,200 square metres. The building is still not officially finished, having been started in 1892; since then it has been redesigned several times, and the building is now in the Gothic style rather than the Byzantine-Romanesque style first planned. Services were first held in the crypt, but now the nave is used not just for services but also for concerts, and is noted for its fine acoustics. A fire in 2001 caused serious damage to parts of the cathedral, and smoke damage is still visible. 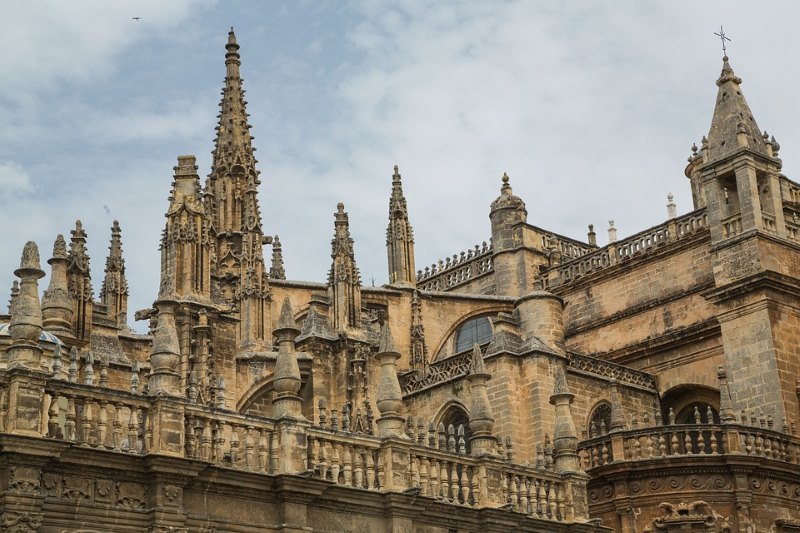 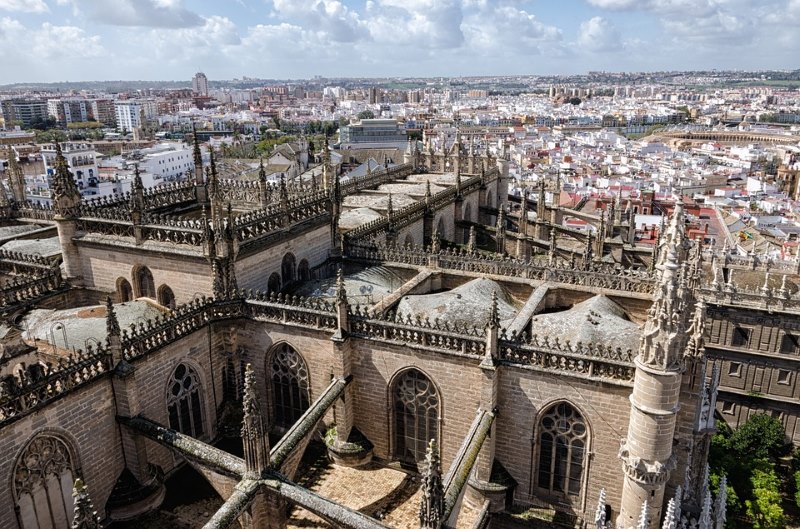 Christopher Columbus is buried in this Gothic cathedral, which was started in 1402 to replace an earlier church (converted from a mosque) which had been damaged in an earthquake in 1376. A notable feature is the big altarpiece depicting scenes from the life of Christ. The cathedral has had to be restored several times following partial collapse, including the major damage caused by another earthquake in 1888, which resulted in the complete destruction of the dome and everything underneath it. The tower is 104 metres high, and the nave is 42 metres high. The cathedral was recognised as a World Heritage Site in 1987.

This huge basilica, which can accommodate 45,000 worshippers, was constructed in 1955 in the Romanesque style, replacing a smaller church nearby. This in turn replaced the original church, which was built in 1745 to commemorate the miraculous finding of a statue of the Virgin Mary by fishermen in a river in the town of Guaratingueta. The tower of the basilica is 102 metres high. The basilica is designed to cater to the needs of its many pilgrims, having for example a parking area for 4,000 buses and 6,000 cars, and the grounds also contain a medical centre and shopping mall.

The biggest church in the world takes up a large part of the area of world’s smallest independent state, the Vatican. Traditionally believed to be located on the burial site of St. Peter, this church (it’s not a cathedral) was consecrated in 1626, construction having been started over a hundred years earlier. The first church on the site was built by the Emperor Constantine in the year 320. The basilica, which can accommodate 20,000 worshippers, receives pilgrims from all over the world, and is also a major destination for tourists, many of whom come to see the famous Sistine Chapel ceiling, painted by Michelangelo.