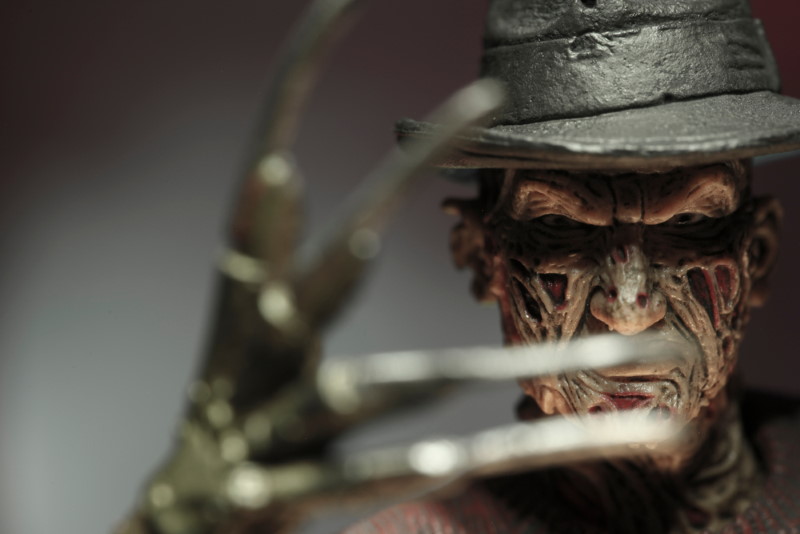 Leatherface may have his trusty chainsaw and Jason his rusty machete, but nothing quite beats the terror of Freddy Krueger. With bizarre dreamscape inventiveness and cheesy one liners, the Nightmare on Elm Street series has some of the best kills in horror.

Although Jackie Earle Haley was an inspired choice to fill Robert Englund’s boots in the 2010 reboot, the movie was ultimately a pointless, glum rehash. However, it does have one stand-out death scene which is worthy of praise. Kris Fowles (played by Katie Cassidy) gets up from her bed and finds herself walking through an elementary school. Catching sight of Freddy scratching at a blackboard, Kris suddenly wakes up and realises it was all a dream. Of course, as fans of the series know all too well, these false awakenings usually mean that death isn’t far behind. As soon as Kris gets back into bed, she begins convulsing violently and is hoisted into the air. She slams and tumbles between the ceiling and walls before her mid-section is sliced to ribbons and she falls back to the bed. Although the scene is very similar to Tina’s death from the original Elm Street, it’s a surprisingly brutal and intense highlight of an otherwise bland movie.

Nancy Thompson (played by Heather Langenkamp) survives Freddy’s rampage from the first Nightmare movie, and she returns for the Dream Warriors sequel to help mentor a new generation of children suffering from his evil powers. However, Freddy proves to be the type of person who carries a grudge, and he finally manages to kill Nancy by impaling her with his blades. It’s a fairly straightforward death (compared to other entries on this list), but few horror franchises kill their iconic survivors.

Although the big fight between Freddy and Friday the 13th’s Jason Vorhees doesn’t quite live up to expectations, the 2003 mash-up sequel does manage to deliver some exceptionally creative kills. In a bizarre scene, pot-smoking Bill Freeburg (played by Tyler Labine) watches in awe as a Freddy/caterpillar hybrid sneaks into the room and pulls out a miniature bong. The ‘Freddypillar’ blows smoke into Freeburg’s face and takes over his mind so he can fight Jason. Technically it’s Jason’s machete which ultimately kills Lindburg, but the sight of Freddy as a bong-smoking, body-stealing caterpillar which leads a character to their death is too good to go unmentioned.

The Nightmare series loves having the last laugh. Just when it seems that everything is back to normal, the filmmakers put in one shocking twist before the credits roll. Satisfied that Freddy has been banished once and for all, survivors Jesse, Kelly and Lisa take the bus to school. Everything seems fine until a burned hand suddenly punches through Kelly’s stomach, letting the audience know that Freddy will inevitably return.

The Nightmare series was in full tongue-in-cheek mode by The Dream Warriors, and the third movie has plenty of inventive deaths and trademark Freddy one-liners. Set in a juvenile psychiatric ward, the young patients learn that they can fight Freddy in their dreams. However, before the kids realise this, Freddy sets his sights on puppet enthusiast Phillip (played by Bradley Gregg) and attacks him by slashing his arms and legs as he lays in bed. Freddy then pulls out Phillip’s tendons and uses them to control him as a marionette before throwing him out of a window to fall to his death.

Perhaps the most elaborate Nightmare death comes from the fourth entry in the series, The Dream Master. Fitness enthusiast Debbie is lifting weights when Freddy suddenly appears and forces the barbell down, breaking her elbows. As if the sight of Debbie’s snapped arms falling to the floor wasn’t enough, she suddenly sprouts bizarre cockroach arms and legs from the stumps. In an impressive display of practical special effects, Debbie completely transforms into a cockroach and is transported into a bug capturing trap, where she is squished between Freddy’s hands.

Dan Jordan (played by Danny Hassel) survives the events of The Dream Master only to be finally killed in the fifth Nightmare movie. Rushing to meet his girlfriend Alice, Dan falls asleep behind the wheel of his truck. In his dream, Dan is ejected from the truck by Freddy and tries to escape on a nearby motorcycle. However, the vehicle slowly morphs into a weird mechanical Freddy hybrid, and Dan’s body is plugged and stabbed with wires, turning him into a cyborg. The weird experience causes Dan to suddenly wake up just before he crashes head first into an oncoming lorry.

In a clear effort to make Freddy more relevant to the MTV generation, Freddy taps into his previously unseen video game skills to kill token stoner character Spencer (played by Breckin Meyers) in The Final Nightmare. Spencer is transported inside a TV and finds himself fighting against a video game character version of Freddy. Spencer successfully fights back against the foe, but Freddy pulls out his own version of a Nintendo Power Glove to get a cheating advantage. Freddy pushes video game Spencer off a ledge which causes real world Spencer to tumble down a flight of stairs into a bottomless pit.

The Nightmare series has always been vague when it comes to the extent of Freddy’s powers, and this is perhaps most evident in the second movie of the series. In Freddy’s Revenge, Freddy uses protagonist Jesse as a host body to wreak carnage in the real world. Although Freddy usually targets his victims one at a time when they are asleep, in the movie’s climatic scene he appears at a pool party and begins slaughtering teens left and right. Even more shockingly, Freddy doesn’t utter a single witty one-liner during the scene, which makes it all the more brutal.

One of the most iconic scenes in horror movie history comes from the very first Nightmare entry. In an effort to stay awake, Glen (a fresh-faced Johnny Depp) lays down in bed listening to music on his headphones while watching a portable TV on his lap. Glen barely makes it past midnight before he falls asleep, causing Freddy’s arms to erupt from the side of the bed and pull him into the mattress. Glen completely disappears into a hole before a huge red geyser erupts, coating the room with gallons of blood in a scene which puts the elevators from The Shining to shame. The death is over in a less than a minute, and the trippy visuals are still shocking and impressive to this day.

Top 10 Space Movies Of All Time