In 1776 America barely counted three million inhabitants. Today it has a population of over 300 million people. The top ten largest cities in America are (almost) all cities with over a million inhabitants (based on figures from 2010).

San Jose, the largest city in Silicon Valley, boasts 1,030,119 people, and is one of the most important centres for technological development in the US. Upon its founding in 1777, San Jose supported the Spanish military in San Francisco and Monterey, serving as a farming community. As California’s first capital, circa 1850, San Jose began to experience rapid population growth after World War II. Much of this growth resulted from veterans returning home from war. Growth continued as the expansion of the technology and electronics industries transitioned the city from a key agricultural centre to an urbanized metropolitan area, earning San Jose the nickname, “Capital of Silicon Valley.” Now considered a global city, San Jose is regarded for its affluence, high cost of living, and low crime. 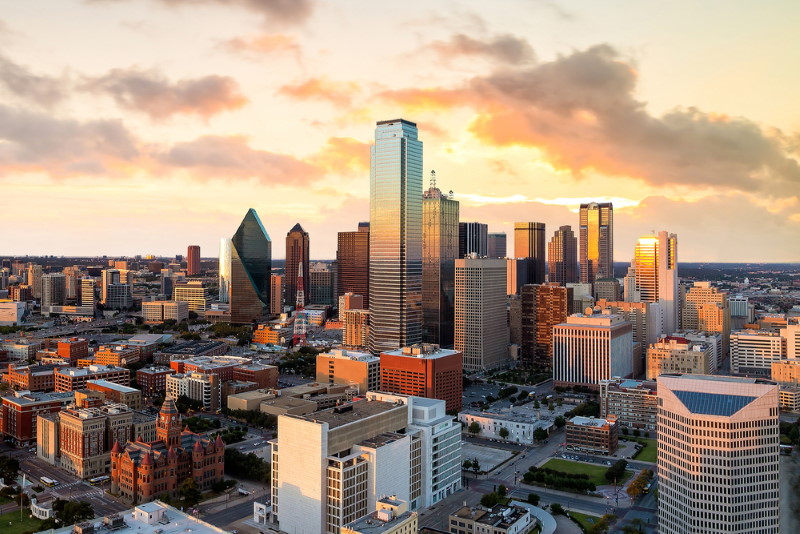 Dallas’ large population is not surprising due to its strategic location and rapid economic growth. Dallas was founded in 1841 and rose to prominence as a result of its location along numerous railroad lines and its importance as a centre for the oil and cotton industries. Its location also served as a convergence of four major interstate highways, when the interstate highway system developed in the 1950s and 1960s. Due largely to the Dallas/Fort Worth International Airport, one of the biggest and busiest airports in the world, Dallas produced a prosperous industrial and financial sector, and became a major inland port. Nowadays, the city’s economy is primarily based in banking, commerce, telecommunications, computer technology, energy, healthcare and medical research, transportation and logistics. Dallas also contributes culturally to the south, both in cuisine – famed for its authentic Mexican, barbecue and Tex-Mex – and in the arts. The Arts District in downtown Dallas offers several arts venues, including the Dallas Museum of Art, and the Dallas Symphony Orchestra. 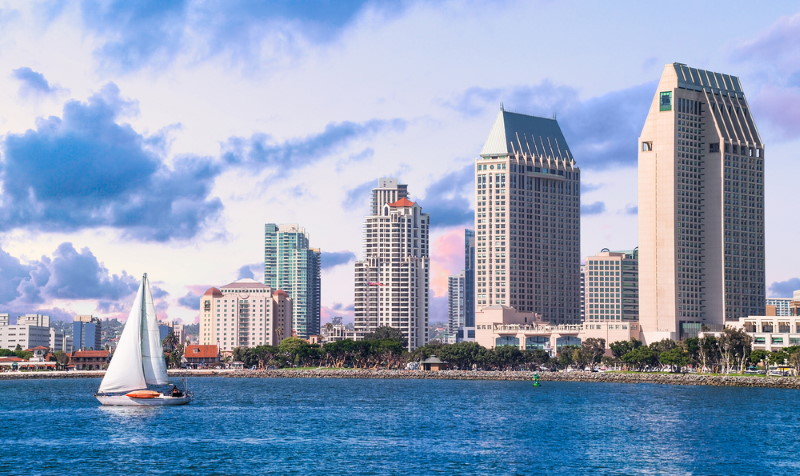 The lovely coast city of San Diego is home to 1,425,976 (2019) people and is the birthplace of California. Famed for its mild year-round climate and natural deep-water harbour, San Diego offers beautiful beaches, which draw in crowds of tourists each year. Tourism is one of San Diego’s main industries, providing tourists with numerous attractions such as Balboa Park, Belmont amusement park, and the San Diego Zoo. Long associated with the U.S. Navy, amongst San Diego’s main economic offerings are military and defence-related activities, international trade, and manufacturing. San Diego has also recently emerged as a healthcare and biotechnology development centre, with the University of California providing its UCSD Medical Centre as the core of this growth. Originally cantered in the Old Town district, San Diego refocused its centre around the bay front hoping this relocation would increase trade. The waterfront location is known as “New Town,” and has claimed recognition as the present-day downtown of San Diego. 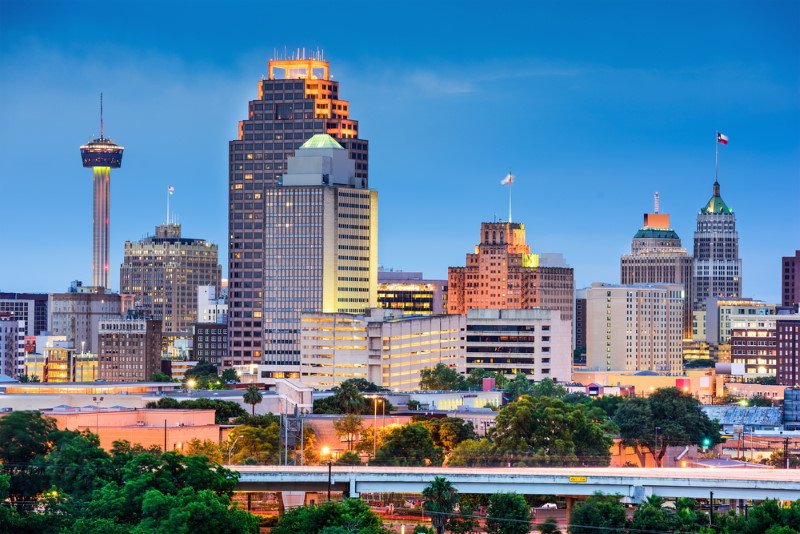 From 2000-2010, San Antonio was the fastest growing of the top ten largest US cities, and now clocks in at 1,532,233 people. Located in the south-central part of Texas, San Antonio derives its name for Saint Anthony of Padua, whose feast day just so happened to lie on the day that a 1691 Spanish expedition arrived in the area. San Antonio has much to offer its residents and tourists. Home to the Alamo, the Tower of the Americas, Marriage Island and offering to its visitors both SeaWorld and Six Flags theme parks, the city is frequented by tourists, approximately 26 million per year. One of the largest rodeos in the world, the annual San Antonio Stock Show & Rodeo, takes place here. With its strong military presence, San Antonio is home to many military bases, including Fort Sam Houston and Lackland Air Force Base. 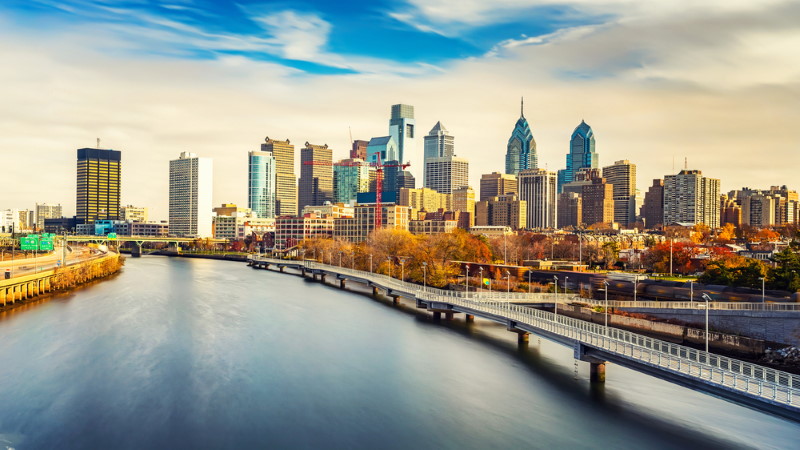 Philly boasts 1,584,138 and counting. Known as “The City of Brotherly Love,” Philadelphia was founded by William Penn in 1682 and has since become the economic and cultural centre of the Delaware Valley. Being one of the nation’s capitals during the Revolutionary War, Philadelphia is rich in history. Philadelphia played host to the Founding Fathers of the United States during the American Revolution, and two of America’s most important documents, the Declaration of Independence and the Constitution, were signed here in 1776 and 1787, respectively. With the turn of the 19th century and the growth of European immigrants, Philadelphia became a major industrial centre and railroad hub. Modern Philadelphia is known for its arts and culture, and Philadelphia cuisine is influenced by its ethnic diversity, the cheesesteak being a quintessential Philly favourite. Home to Fairmount Park, the largest landscaped urban park in the world, Philadelphia outranks any other American city when it comes to outdoor murals and sculptures. 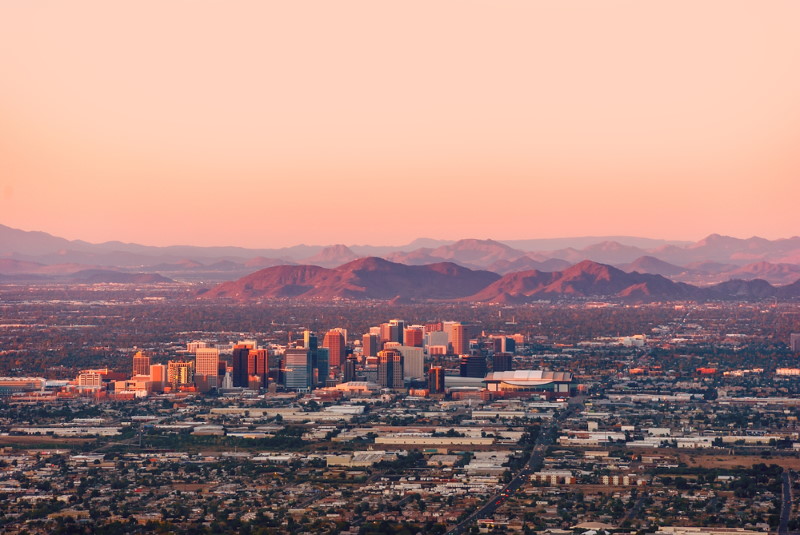 As the capital of Arizona, Phoenix’s population of 1,660,272 is the greatest of any state capital in the United States. And as the state capital, much of the city’s current residents, known as Phoenicians, are government employed. Phoenix’s early economy made its name mainly in agricultural, made up of the “5Cs” – cattle, cotton, copper, climate, and citrus. Rapid change in economic development and diversification has shifted the capital’s makeup over the last four decades, reallocating farmlands to suburbs. Arizona State University can also be credited for bolstering the area’s population through education and its enhanced research capabilities, encouraging a multitude of high-tech and telecommunications companies to relocate to Phoenix. With its north-eastern Sonoran Desert location, Phoenix’s subtropical desert climate makes for a warm getaway in winter, and the city has seen great seasonal tourism growth and recreation. Offering up a famous political culture, Phoenix has been home to Republican Senator, John McCain, and retired United States Supreme Court justice, Sandra Day O’Connor. 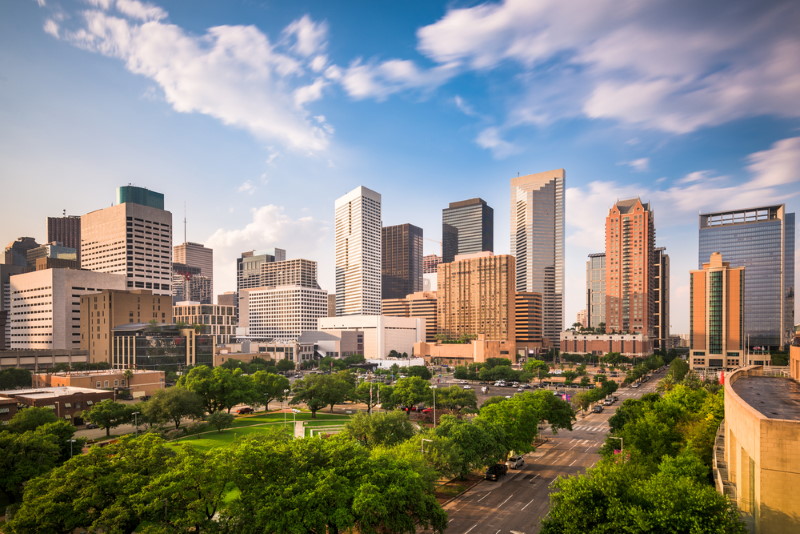 At 2,325,502 people, Houston’s population growth over the past century is largely due to its 1901 oil discovery and its prosperous port and railroad industry. Also adding to its cultural significance, Houston became home to NASA’s Johnson Space Centre, where the Mission Control Centre is located, as well as to the Texas Medical Centre, the world’s largest group of healthcare and research institutions. Houston’s economy is rooted in many industries, such as energy, aeronautics, manufacturing, and transportation. Houston also leads the way in manufacturing of oilfield equipment. The Port of Houston is the largest in the USA in terms of waterborne cargo tonnage handled and second in total cargo tonnage handled. In direct correlation with its growing international community, consisting of various ethnic and religious backgrounds, Houston is becoming a cultural epicentre, offering both a rapidly growing visual and performing arts scene in the Theatre District, along with many cultural institutions and exhibits, which draw in over 7 million visitors a year to the Museum District. 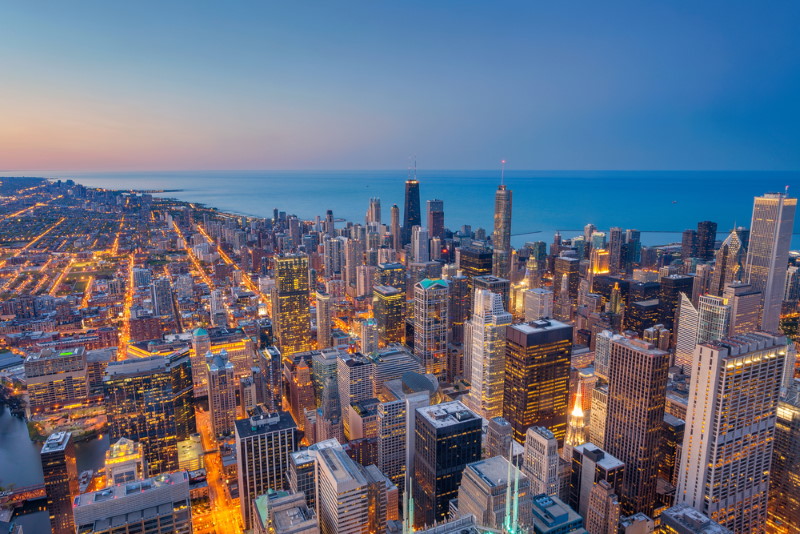 The windy city whisks in a whopping 2,705,994 residents, making it the third most populous city in the United States. After experiencing rapid growth in the mid nineteenth century, Chicago became a global heavy-hitter in terms of finance, commerce, industry, telecommunications, technology, and transportation, with O’Hare International Airport being amongst the busiest airports in the world. Also known as “Second City,” Chicago’s rich culture has contributed greatly to the visual arts, film, theatre, improvisational comedy, and music, particularly soul and blues. The city’s waterfront attracts tourists and residents alike; over a third of the population surround the lakefront neighbourhoods of Rogers Park and South Shore. Chicago is famed for its regional food and shopping, such as its delicious deep-dish pizza, and high-end retail along the Magnificent Mile. Hailed as one of America’s best sports cities, Chicago lays claim to two Major League Baseball teams, the Cubs and the National League, as well as the White Sox of the American League. The Chicago Bears have won nine NFL Championships, and the Chicago Bulls are one of the most renowned basketball teams in the world. 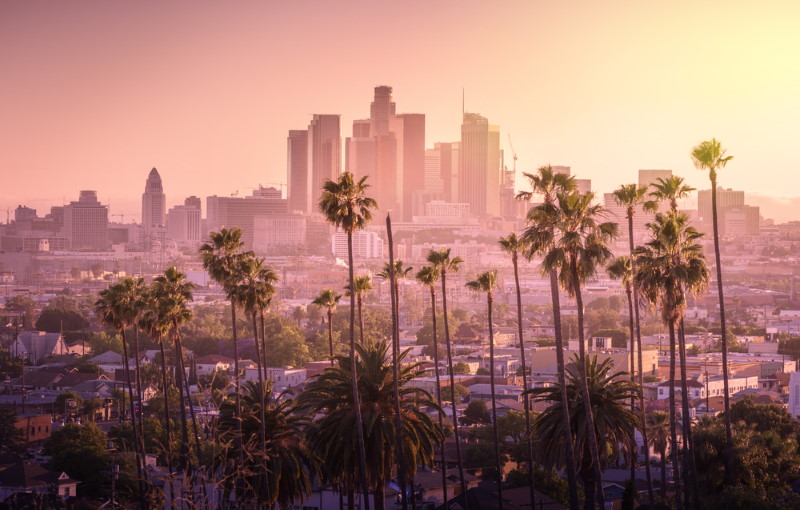 Clocking in at 3,990,456, L.A. is the most diverse of America’s largest cities. Nicknamed the “City of Angels,” Los Angeles has been ranked ninth in the Global Economic Power Index, influencing international trade, business, entertainment, culture, media, fashion, science, education, technology, sports, medicine and research. Being that one in every six of its populous works in a creative industry, Los Angeles is often considered the “Creative Capital of the World” and is home to Hollywood, the notorious hub of the motion picture industry. Leading the world in the creation of recorded music, television programs, and video games, Los Angeles is the city many flock to for fame and fortune. People from more than 140 countries call Los Angeles home; and ethnic havens, like Chinatown, Koreatown, Little Ethiopia, Little Tokyo, Little Armenia, and Thai Town represent the diverse nature of the city. 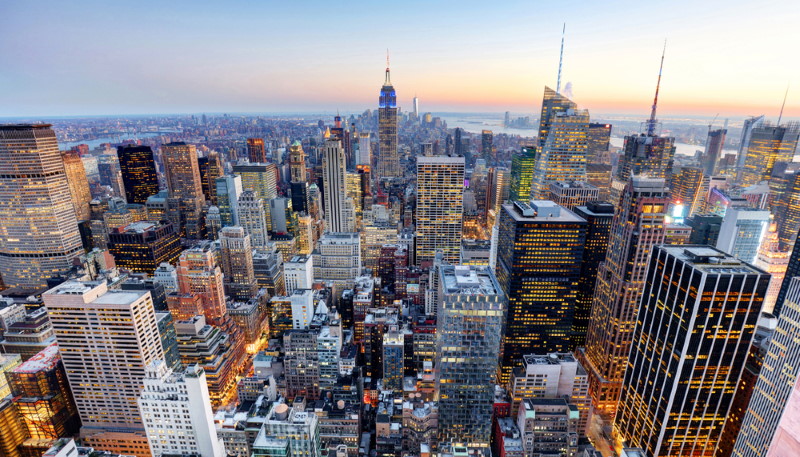 At 8,398,748 people, New York claims the number one spot, as the most populous city in the United States. Considered by many to be the cultural capital of the world, New York is home to the United Nations Headquarters, branding it an important centre for international diplomacy. It also holds significant global impact over commerce, finance, technology, research, education, media, fashion, art and entertainment. Nestled in one of the world’s largest natural harbours, five boroughs make up New York City – The Bronx, Brooklyn, Manhattan, Queens, and Staten Island –, each with their own culture and character. NYC boasts numerous recognizable landmarks and keystones of American iconoclasm, the Statue of Liberty being perhaps the most important, both as a symbol of democracy and one of the landmarks the first immigrants would see upon arrival to the US. As the brightly lit home of Broadway, Times Square is a centre of world entertainment and remains one of the world’s busiest pedestrian intersections. Many of New York’s best colleges and universities, such as Columbia University, New York University, and Rockefeller University, are amongst the top-rated in the world.