When travelling to The Netherlands do not assume that there is not much to do there. The predominantly flat countryside is beautiful and there is a wealth of historical sites and interesting nooks and crannies to visit, especially in the capital city, Amsterdam. 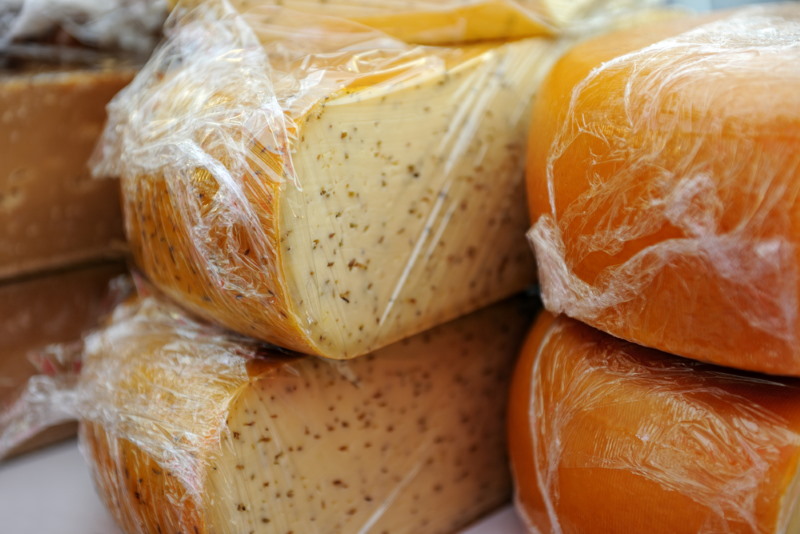 Named for the renowned landscape painter, the Albert Cuyp Market is arguably Europe’s largest day-time market. Originally a rag-tag huddle of street vendors and pushcarts the market grew so large that the city authorities formalised an official market in the area, at first only on Saturdays but growing to six days per week. The market boasts around 260 stalls and you are sure to find a huge range of products on sale there: from fresh vegetables and flowers to clothing, leather goods and much more. A particular favourite at the market are the Dutch Stroopwaffels (syrup waffles) a delicate sweet treat consisting of two fresh thin waffles enclosing a sweet caramel layer. Many of the stall-holders represent the different ethnicities that inhabit the city so the market has a vibrant, cosmopolitan and multi-cultural air. 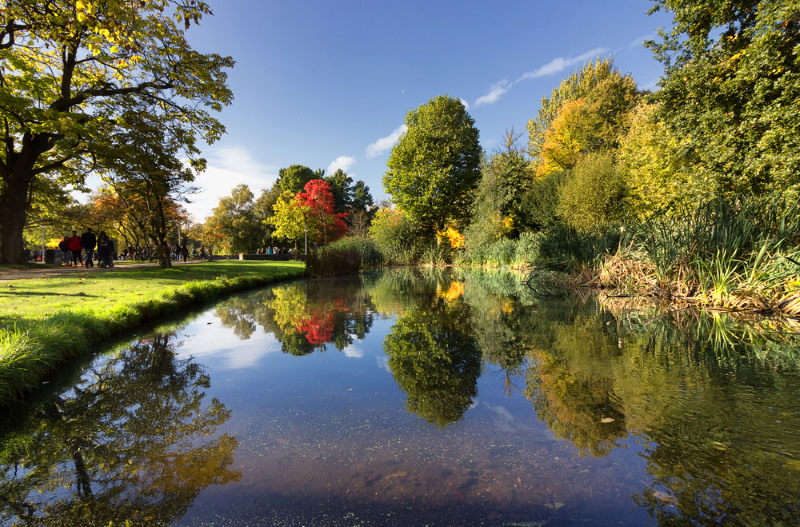 Vondelpark, named after the 17th century writer Joost van den Vondel, was originally called Nieuwe Park or New Park. The installation of a statue of the writer in 1867 saw people beginning to call the park ‘Vondel Park’ and the authorities formalised the name change in 1880. The park was created as a place for the people of Amsterdam to walk and ride their horses, to sit on the green lawns and to drink in the tranquil beauty of the vegetation. Amsterdam council members were remarkably sanguine about the possibility of lovers using the park for romantic trysts, saying that adults were permitted to have sexual intercourse in the park, as long as it was dark and not near the playground areas (and as long as they ‘tidied up’ after themselves!), but the Amsterdam Police refuted this, saying, rather repressively, that such activities are against the law. Over the years, the park has seen a small stream come and go, several paths change formation and some even vanish altogether, the planting and flourishing of a sweetly scented rose garden and the building of children’s playgrounds and an open-air theatre, but remains, at all times, a relaxing and beautiful retreat. 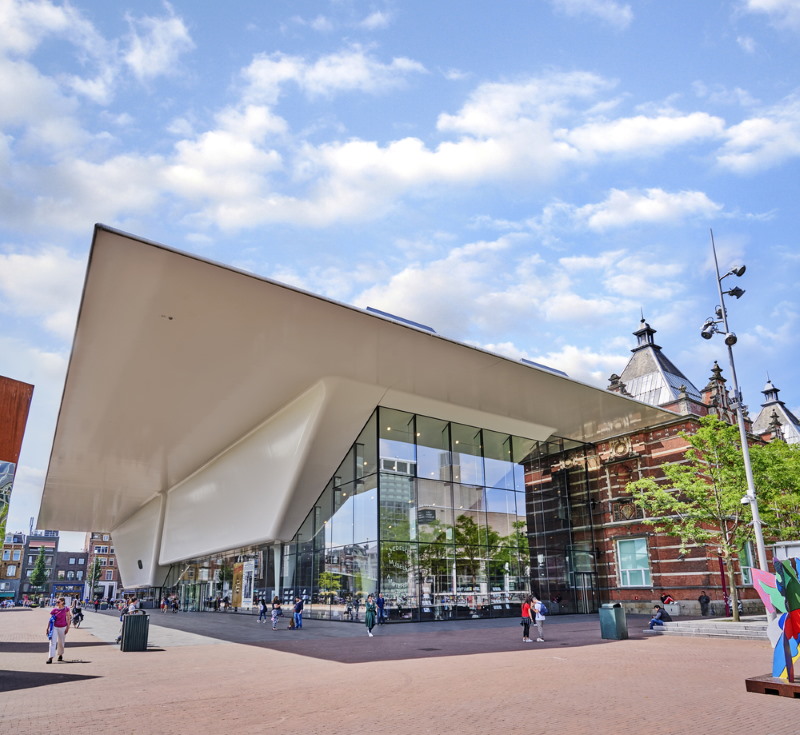 Despite being founded in 1895 primarily to house Sophia Adriana de Bruyn’s collection of antiques and art the Stedelijk is now a collection of modern and contemporary art by artists like Jackson Pollock and Andy Warhol, although it does contain older pieces from the likes of Vincent Van Gogh and Henri Matisse and other artists from the early 20th century. Setting out to be as comprehensive as possible, the Stedelijk offers a broad sweep of artists from the 20th and 21st centuries in genres that include pop art, Bauhaus and CoBrA, comprising sculpture, posters, print and drawing, moving image and sound and even photography and graphic design works. 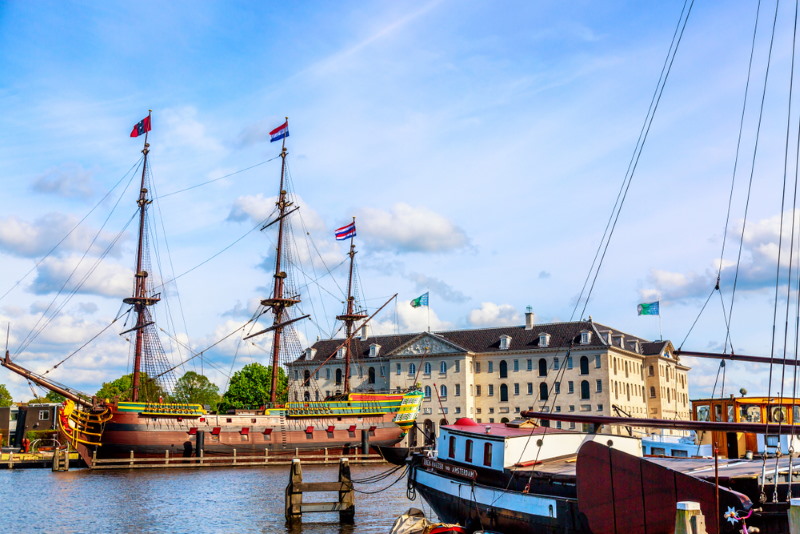 Appropriately housed in a building that fronts onto the water the National Maritime Museum is a celebration of the Netherlands’ impressive naval history. Inside the magnificent 17th century building you can explore the world of the ancient mariner as you learn about what life was life for sailors in those long-ago days of slavery, piracy and romance on the seas. Outside the Scheepvaartmuseum you can actually explore a life-size replica of the Amsterdam, an 18th century Dutch sailing vessel that plied her trade between the Netherlands and the East Indies. While the thought of a maritime museum may seem to be dull and uninteresting, a visit to the Scheepvaartmuseum is well worth taking a chance on: the exhibits are fascinating and well laid-out and you will thoroughly enjoy learning about the history of the sailors that helped to shape this beautiful country. 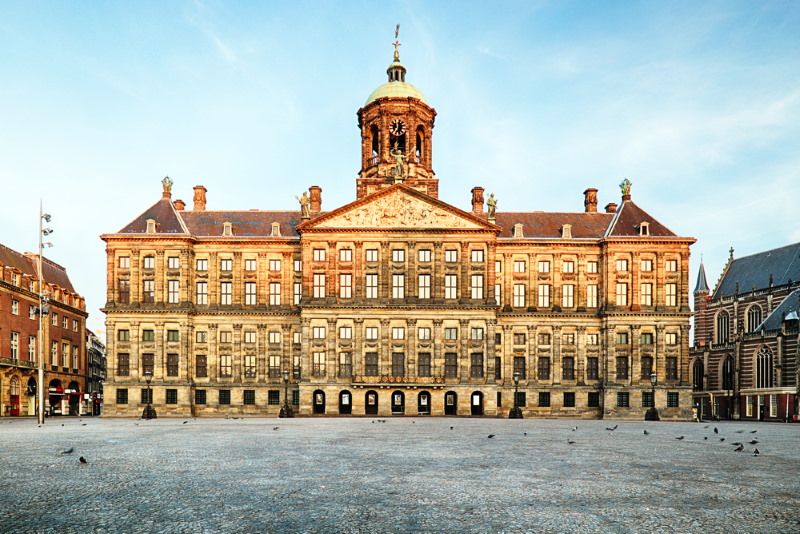 This beautiful and elegant building began life as the Town Hall in July 1655. After Napoleon Bonaparte’s brother was declared King Louis of Holland in 1806, he moved to Amsterdam and converted the building to be his palace. Despite this annexation of the building, he did not get to enjoy its marble beauty for long, abdicating in 1810. After some political turmoil the current ruler realised the wisdom of having a central residence and the Palace was formally taken over as a royal dwelling, a function that it still fulfils today. The immense central hall, exquisitely carved statues and impressive dimensions are all inspired by ancient Roman public buildings. The walls are adorned with superb works of art, including the collection of the House of Orange-Nassau, making the palace an absorbing, fascinating and soothing place to visit. Your only problem will be finding the time to see everything! (Please note: the Palace is closed to visitors during Royal events.) 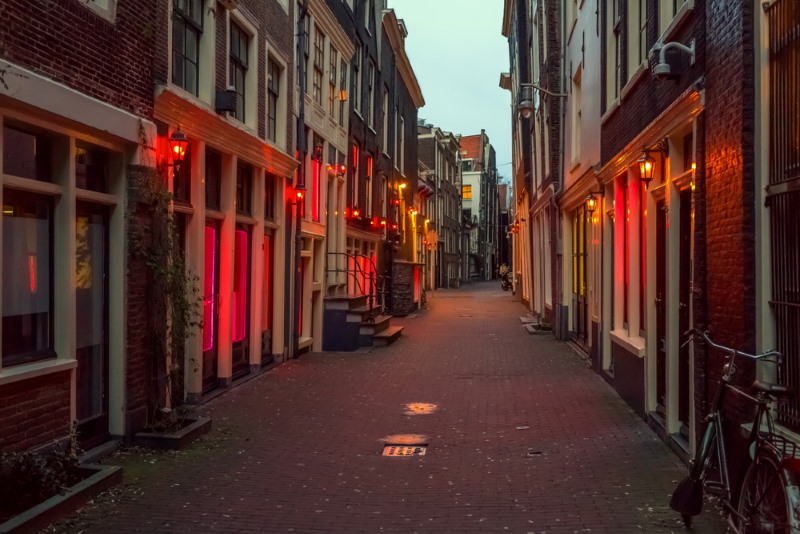 The largest and best known of Amsterdam’s red light districts is De Wallen. Amsterdam, of late, has become a popular destination for stag parties, as young men look to sow a few last wild oats before settling for permanency and respectability! Amsterdam’s legal sex trade is the subject of intense fascination, risqué interest and, in some cases, even revulsion, by those who have never contemplated such a business before. The red light district, so called from the discreet red light that used to show in the windows of affectionate ladies available for a short time, consists of many small cabins, many of which have large windows which allow prospective clients to literally ‘window shop’ until they find someone that they would like to get to know. While sex work is legal, and there is plentiful medical assistance, there is no requirement for sex workers to have regular medical checks. Non-residents may not work in the sex trade (work permits are not given for such work) and street prostitution is still illegal. Many room owners or brothel proprietors do insist on clean health certificates from their workers, so, with care, you can indulge yourself without too much worry about contracting a social disease. 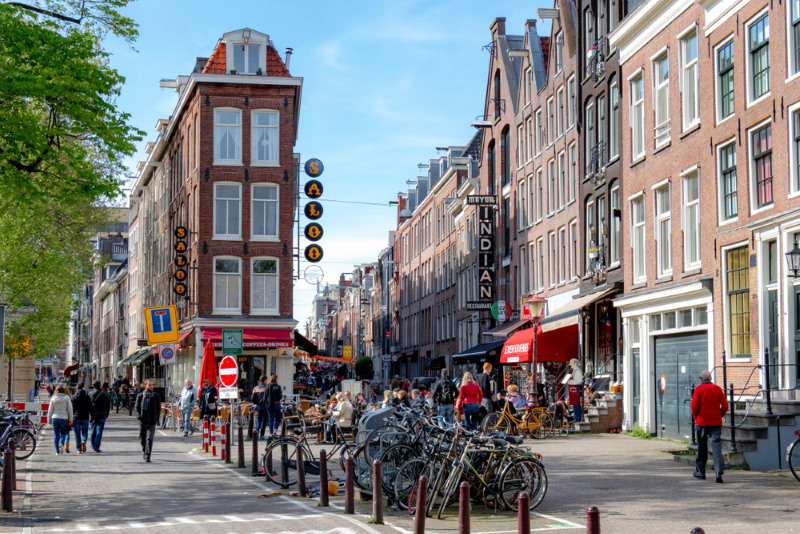 An immense open square in the heart of central Amsterdam, Leidseplein is the thriving hub in the city. Street performers, clowns and other entertainers ply their trade while markets sell produce and people come to see and be seen, to buy and to take photographs to commemorate their trip to Amsterdam! Leidseplein does not only bustle during the day; at night it is the heart of a thriving nightclub scene. In winter, a skating track circles the square and traffic is able to pass close to the square, making it easy to access at all times. If nothing else, Leidseplein is very close to several other must-see Amsterdam attractions, which makes it a perfect spot to begin and end the day’s exploration! 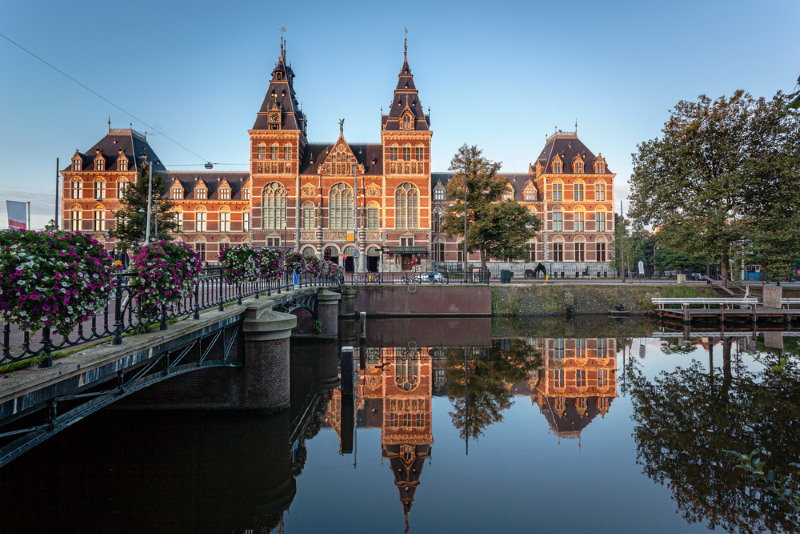 The classical and old fashioned atmosphere that used to pervade this magnificent art and history museum is gone, swept away in a ten-year renovation, from 2003 to the re-opening ceremony in April 2013, overseen by Queen Beatrix, that cost nearly 400 million euros and saw stately dignified rooms replaced with vast open expanses; serious and worthy but slightly dull exhibits made more accessible and inviting to all generations and a unique and different way of grouping the works of the masters. The new director of the museum is not content with having ripped through the traditional guidelines of how a museum and art gallery should be laid; he is set on bringing the museum bang up to date, as evidenced by his announcing the intention of purchasing one of Lady Gaga’s more daring avant garde dresses as an exhibit! Despite all this exciting modernity, the museum still houses some of the best works of those young and exciting painters, who have come to be known as ‘old masters’ thanks to their consummate skill and the ages in which they were born, making it a fantastic and fascinating place to visit for the day. 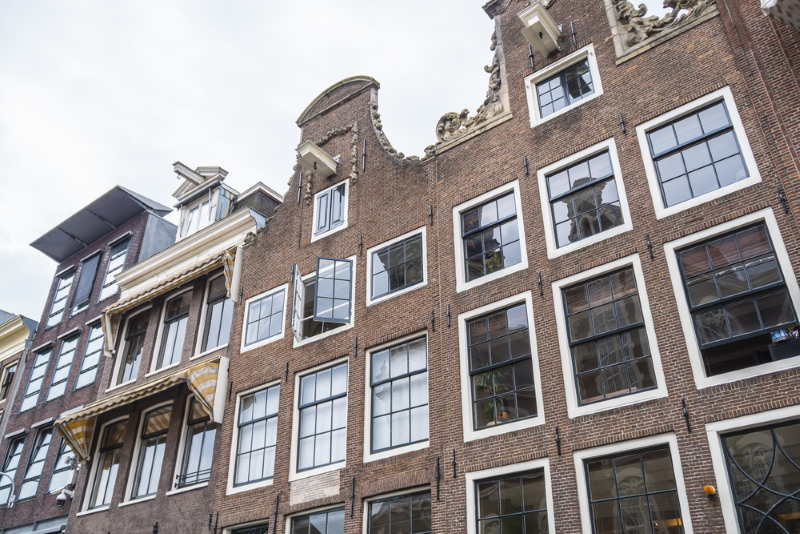 A tall, nondescript house squeezed in between other, similar buildings, there is nothing immediately striking about the Anne Frank Museum. It is only when you know the story of this place, where a living breathing person was trapped between innocent childhood and young burgeoning womanhood as we read in the pages of her diary. Her diary is a warm and intimate account of her life, her hopes and fears and wishes. As a thirteen year old girl, she cared nothing for politics and barely mentions the reason behind their incarceration; recounting petty squabbles with family members in hot detail while major historical events passed her by. By the end of the diary, some two years later, we have seen her become a more mature and thoughtful young lady, more tolerant of her family’s faults and much more politically aware. Seeing the cramped conditions in which Anne Frank, her family and the other families seeking refuge had to share will bring it home to all but the most self-centred people exactly how difficult were the conditions in which she lived and matured until her horribly premature death. Do not expect to giggle or smile at the Anne Frank Museum, but if you come away more thoughtful and immensely grateful for the small everyday freedoms of modern life, then you will have learned a great lesson. 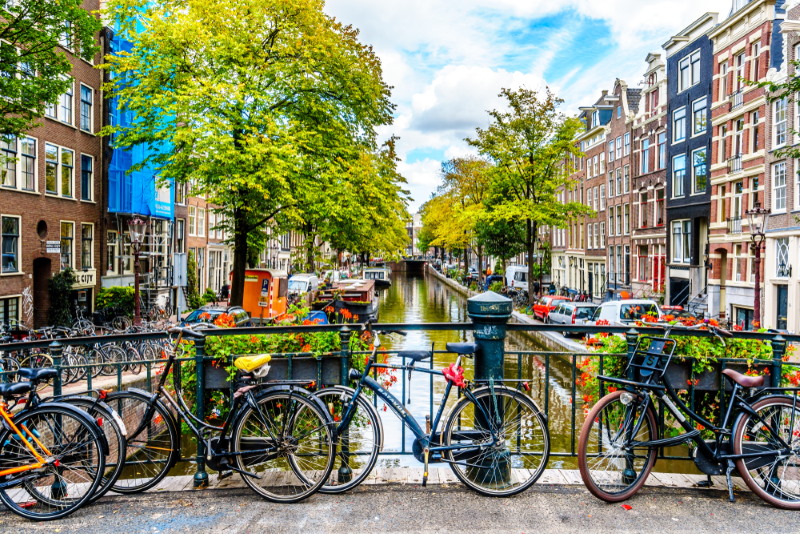 The heart of Amsterdam is divided by a neat series of canals that both divide and give definition to the city. These canals were created in the 17th century and remain largely intact, providing a wonderful and unique backdrop for any visit to the city. The Anne Frank Museum is in this part of town, so you can combine a visit to that tragic and poignant house with a happier sightseeing experience. Because there are so many historically important buildings within the concentric canals, plus, of course, the canals themselves, the entire area has been designated a World Heritage Site by UNESCO. As you work your way around the hundred kilometres or so of canal, view the 90 islands and cross or count as many of the 1500 bridges as you can, try to spot the even older remnants of the original defensive canals (start with Singel, which began life as a moat in the 1400s) most of which were incorporated into the later renovations.