Video games have long been an important part of our pop culture, so it makes sense when they turn up in other forms of media. Although the results can be embarrassing when script writers who have clearly never touched a controller in their life try and come up with their own ideas (hence the glut of wonky ‘virtual reality’ movies over the years), others have managed to come up with some pretty creative fictional concepts. 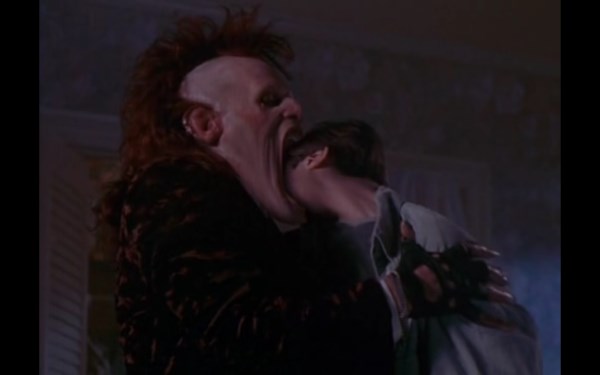 Brainscan features Edward Furlong as a horror-obsessed teen who thinks he’s found a new level of terror when he discovers the interactive video game Brainscan. The game lets players commit grisly random murders which are surprisingly realistic, but things take a weird turn when the game’s host Trickster comes to life and Michael realises he has been really killing people under the a hypnotic spell. It it weren’t for those real life repercussions, Brainscan would probably be quite an interesting – albeit messed up and disturbing – game. 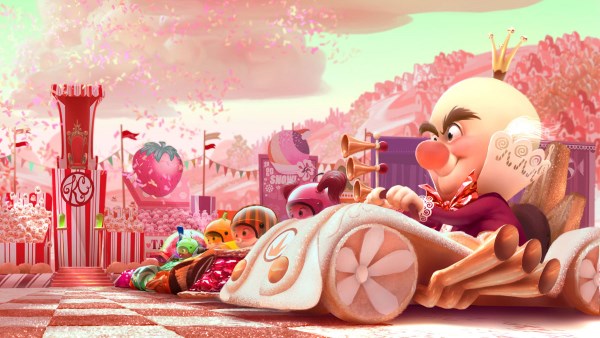 Wreck It Ralph’s constant barrage of references and in-jokes paid affectionate tribute to the history of video games. As well as featuring countless characters from other franchises, the movie also came up with its own titles like the arcade platformer Fix It Felix Jr and the first person shooter Hero’s Duty, but the best has to be Sugar Rush. Set in a bright and sickly sweet candy kingdom, Sugar Rush is a kart racer brimming with charm and features some seriously enviable tracks which any Mario Kart fan would love to speed around. 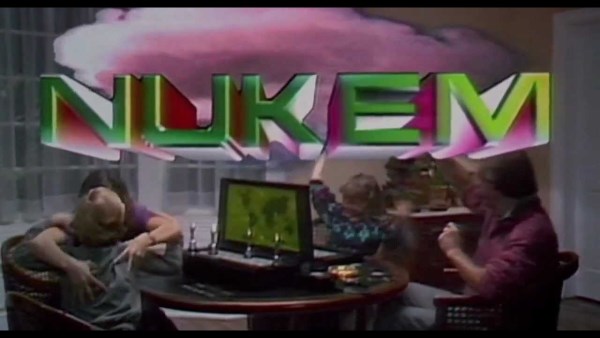 “Get them before they get you” is the tagline from the commercial for Nukem; a home game system featured in Robocop where families get to reenact all of the tension and fun of global nuclear warfare. The interactive board game/video game has players sat around a Battleship-inspired set, but instead of plastic boards and pegs there are mini warheads and a big red button which unleashes nuclear armageddon. 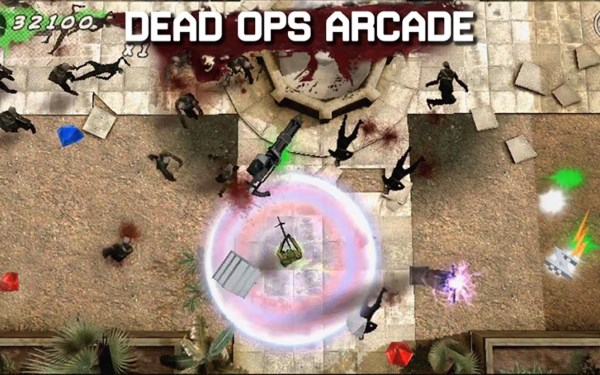 Video game easter eggs are always fun to discover and they don’t come much better than finding an entire separate ‘game within a game’. We’re not just talking about mini games here – Mortal Kombat 2 jokily loaded up a game of Pong after players completed 250 two-player games, Tekken’s loading screen featuring space shooter Galaga and Day of the Tentacle included a fully playable version of Maniac Mansion. However, one of the more interesting ‘game within a games’ secrets is in the first Black Ops. Players can actually walk around the menu screen and access a console in the corner. After typing in the code ‘DOA’, a game called ‘Dead Ops Arcade’ loads. This isn’t just a silly mini game, it’s a surprisingly fun and addictive zombie shooter in the vein of Smash TV. Genuine effort has been put into it and it’s nothing like the Call of Duty gameplay at all. Technically, this is a real game as it is of course fully playable, but Black Ops secretly tucks it away and passes it off as a fake arcade game. Classic text-based adventure game Zork can also be accessed from the terminal and, while it’s cool, it’s a little less impressive. 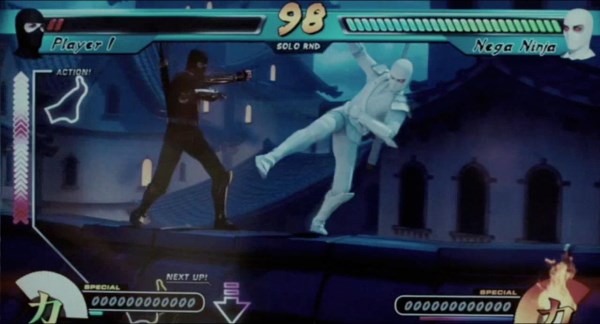 Ninja Ninja Revolution is a bizarre and very fun looking arcade cabinet which is a parody of rhythm games like Dance Dance Revolution but with some bloody beat em up action thrown in. Scott and Knives play the game together by throwing out ninja moves which attack the onscreen ninjas. The practice comes in handy at the end of the film when the two team to take on Gideon and they use their old 2 player co-op skills to give the final evil ex a combo beatdown. 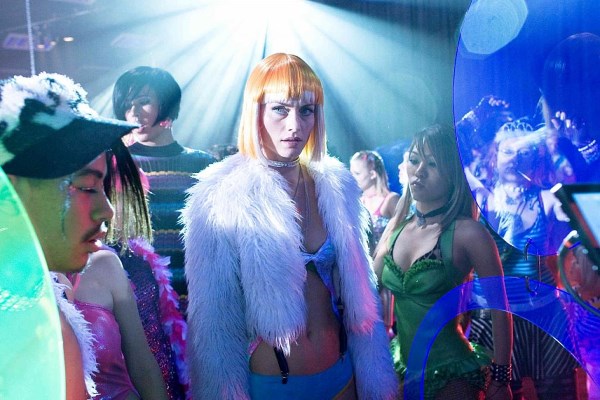 Action sci-fi Gamer had a pretty high-concept premise where players take control of death-row inmates and fight each other to the death in a bloody battleground called Slayers. However, the movie’s other big multiplayer game – Society – offered a much more intriguing take on video gaming. Clearly inspired by the Sims and Second Life, players take control of actual people in a creepy ‘anything goes’ playground. Players can be paid to be controlled or pay to take control and the result is a cesspit of debauchery with ‘real’ avatars having sex with each other, deliberately harming themselves and acting out in weird, disturbing ways. The content is much more uncomfortable and disturbing than the macho ultraviolence of Slayers and it offers a pretty bleak view on the future of video games. 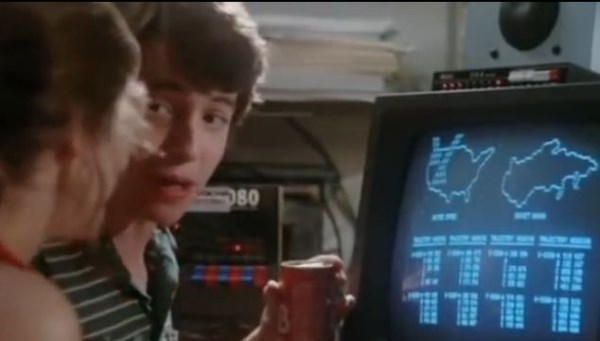 In 80s teen classic WarGames, teenager David Brightman bites off more than he can chew when he uses his modem to play what he thinks is a military missile command game against another computer. Unbeknownst to David, he’s accidentally dialled into a government network and he’s playing against a highly sophisticated supercomputer which is feeding back false information about the Soviet military to NORAD based on its interactions with David. Although he very nearly starts World War III, it all works out in the end as David teaches the AI the concept of stalemate by making it play tic-tac-toe. A WarGames tie-in video game was actually released in 1983, but players didn’t get a real taste of the type of gameplay teased in the movie until DEFCON was released in 2006.

The video game featured in Darren Aronofsky’s drama The Wrestler offers some surprisingly poignant insight into the life of the film’s fictional wrestler Randy ‘The Ram’ Robinson (played by Mickey Rourke). Once a big name in the 80s, Randy is now well past his prime and relives his glory days at weekends wrestling in sketchy local matches for money on the side. In one scene Randy asks a neighbourhood kid to play Nintendo with him and he dusts off his old NES to play ‘Wrestle Jam’. Randy plays as himself against his old 80s rival ‘The Ayatollah’ and he easily beats his young opponent (who is more interested in talking about Call of Duty than wanting to play on an old console) by performing his signature move “The Ram Jam” as a finisher. The scene is an evocative reminder of Randy’s time in the spotlight and deserves credit for the loving attention that has been poured into creating the game. Unlike most entries on this list, it looks and plays like a real 8-bit NES game (a programmer actually created a fully playable game which could be played with NES controllers) and it looks like it could have very easily been from that era. 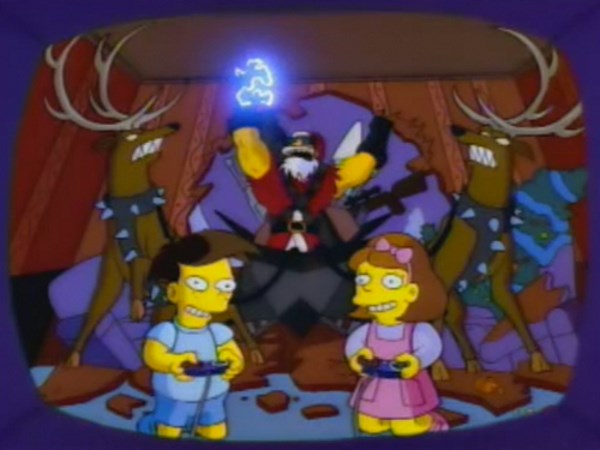 The Simpsons has come up with some pretty ingenious fake video games over the years. The likes of Billy Graham’s Bible Buster, Escape From Death Row and My Dinner with Andre have all provided some good visual gags, but the cartoon’s best fictional game had an entire episode devoted to it. In the episode “Marge be Not Proud”, Bart, along with most of the other kids in Springfield, becomes obsessed with an ultraviolent fighting game called Bonestorm and he goes for a “five finger discount” when he tries to steal a copy from the mall. Only a very brief snippet of the Mortal Kombat-inspired gameplay is shown but the episode perfectly parodies the over the top extremeness of 90s video game commercial. The ad shows Santa smashing a tank through the wall of a house and firing a copy of the game into the console with a bazooka. He then turns to the camera and urges kids to go up to their parents and tell them “Buy me Bonestorm or go to Hell!”

1. Most of the Games from Tron 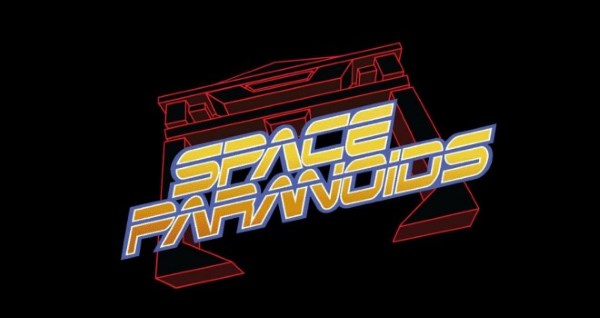 More than 30 years since its release, Tron is still one of the definitive video game movies. Game designer Flynn finds himself playing some of the games he helped create when he is transported inside the ENCOM mainframe, only he doesn’t have the luxury of standing at an arcade machine. While it’s clear that some of the fictional games like Astro Gunner and Space Paranoid are clear riffs on popular arcade titles from the time, Tron showed gamers a level of immersion that they had never even dreamed of. A Tron arcade cabinet released in the same year brought many of the games featured in the movie to ‘life’, but they were pale imitations of the awesome experience teased by their movie counterparts.

Top 10 On Set Injuries which Made it Into Movies