Few fantasy creatures are as awe-inspiring and terrifying as dragons. Although most of us picture these winged, fire-breathing creatures as powerful foes capable of easily destroying a fantasy kingdom, they’re not always malicious – in fact, sometimes they’re even the hero. Whether they be friend or foe, these majestic creatures have inspired and frightened audiences for many years with their cinematic appearances.

This cult Japanese anime series (and subsequent live action movie) Dragon Ball Z unsurprisingly features a dragon or two, but few beat the ‘Dragon God’. Known by many names including the Holy Dragon and Shenlong, Shenron has the horns of a stag, sharp teeth, green scaly skin, red eyes and a long serpentine body of which his tail takes up three-fourths of his length. Not only does this beast have wish granting abilities, he is the culmination of what happens when the characters in the series combine all seven dragonballs together. In the cinematic adaptation, the dragon only appears once towards the end when Goku unites the balls in order to bring his martial arts teacher and mentor back to life. 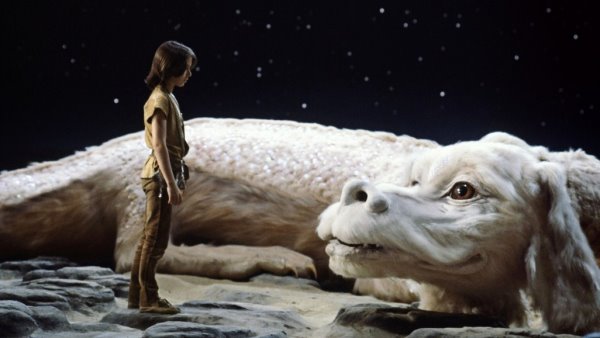 Falkor isn’t quite like other dragons on this list. Instead of looking like an overgrown, vicious lizard, Falkor has the head of a rather cuddly and cute dog. Pink-scaled and impossibly long, Falkor is a ‘luck dragon’ with the ability to bring incredible luck to any companions he travels with – always a handy power to have on your side. Falkor is a wise, indispensable companion to Atreyu in the land of Fantasia in this cult fantasy flick and the 80s puppet special effects only adds to his charm. 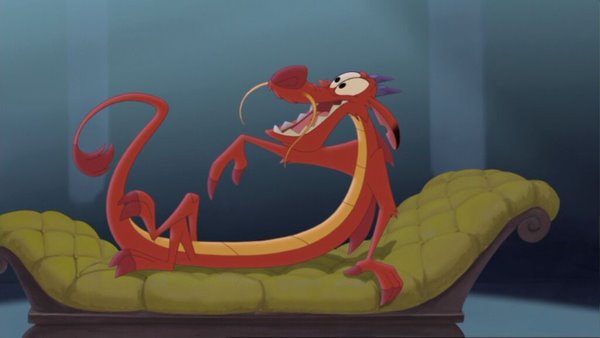 Once a guardian spirit of Mulan’s family, Mushu was demoted to the humiliating position of an incense burner and gong-ringer for deceased ancestors ever since he failed to protect a family member. Voiced by the hilarious Eddie Murphy, it’s no surprise that Mushu becomes the comic relief in this Disney classic, ultimately earning back his job as a full time guardian. Designed for comedy more than intimidation, this red dragon is the smallest on the list, probably because it was easy for the animators that way. Nevertheless, he was still a crowd favourite and the mischievous being returns in the sequel which sees him up to his usual tricks as tries to keep his position as guardian and trusted companion.

There are a few fair noteworthy dragons in the Harry Potter film series. Hagrid’s pet Norbert and the beast in Gringotts bank both enjoy their time in the spotlight, but there is really only one standout fire breather in J.K Rowling’s world – the Hungarian Horntail. Appearing in Harry Potter and the Goblet of Fire, the Horntail was nothing but trouble as soon as it was released from its cage in the forbidden forest. Harry is forced to face the dragon in the Triwizard Tournament where he must separate it from the golden egg. What ensues is one of the best dragon chase scenes to grace our screens.

This singing beast makes for a particularly lively cinematic outing. Brought to life Sean Connery’s unmistakable Scottish drawl, Draco is a light hearted, warm being who goes against the stereotype of dragons. Giving part of his heart to save the king, he hopes it will help bring about a new age of peace. Unfortunately it doesn’t and in the end Draco ends up sacrificing his own life to save the kingdom from the tyrannical ruler. Along the way our hero makes friends with his would be killer, dragonslayer Bowen, and the pair set up a scam in which they both earn gold by pretending to fight. Although the special effects are a bit naff now, Dragonheart was nominated for several awards including an Academy Award for Best Visual Effects. 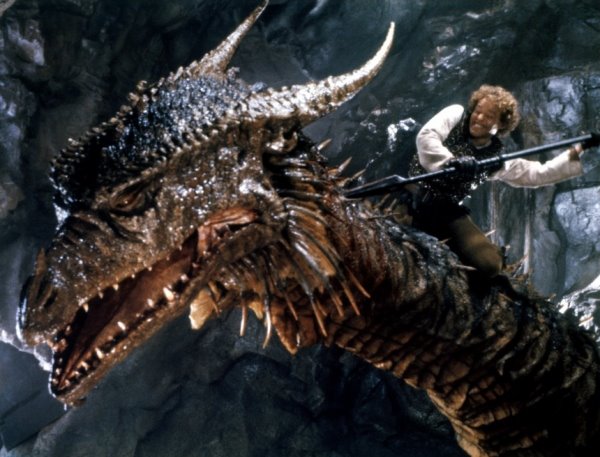 This 80s cult classic was miles ahead of other fantasy films of its time. Dragonslayer saw the first use of Go-motion animation; a variation of stop motion animation which incorporates motion blur into each frame. The story is set in the land of Urland where a terrible dragon, Vermithrax, is terrorizing the medieval land. Representatives from the kingdom seek the assistance of the wizard Ulrich to defeat the dragon but when Ulrich is killed, the task to confront the dragon falls to his apprentice, Galen. With his lifelike movements and terrifying attitude to match, Vermithrax surprisingly failed to make much of an impact on cinema audiences but the movie later became a hit on video and the ingenious special effects work nabbed Dragonslayer an Academy Award nomination for Visual Effects. 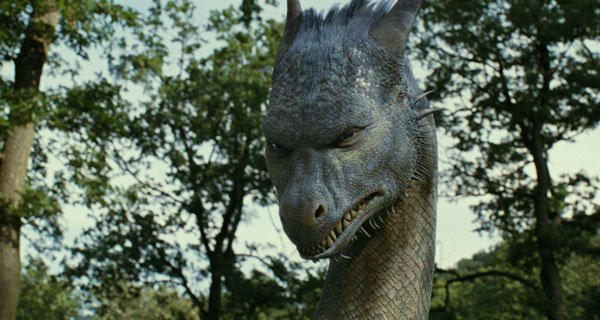 Though it was widely panned by critics (scoring a 16% on rotten tomatoes), Eragon managed to go and make a modest box office splash raking in over $240 million worldwide. Based on the novel of the same name, the story follows a young farm boy, Eragon, who stumbles upon a magical egg which hatches a dragon who binds itself to him, making him a legendary Dragonrider. It isn’t long before the evil king sends assassins to kill him and his dragon, but they escape with the help of a veteran ride, Braun. The two train to fight before joining the rebellion against the king. Unfortunately for fans, their victory was not enough to grant a sequel which many had held out hope for. Although it’s undoubtedly a rough film, the stunning special effects which help bring the dragon Saphira to life are definitely a highlight. One of the more stunningly constructed beasts on this list, the majestic being makes an intimidating and inspiring foe in a glistening set of armour as well as an adorable little newborn which makes us all want to stumble upon a dragon egg of our own.

One of the most frightening villains in the Disney universe, Maleficent is anything but nice. In the 1959 Disney classic, the evil witch curses the beautiful Aurora so that she falls into an eternal sleep and can only be awoken by true love’s kiss. When dashing Prince Philip comes to save the princess, Maleficent transforms herself into a giant, terrifying beast who breathes green flames from its mouth. This beast doggedly pursues Phillip until he is forced to stab it through the heart with his trusty sword. With one hell of a memorable transformation scene and a truly chilling presence which will scare any young child, the original portrayal of Maleficent is still the best. 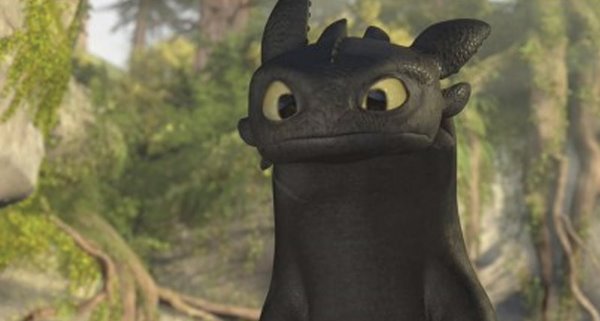 DreamWorks’ animation series features many impressively designed winged creatures, but none compare to the star of the film – Toothless. A legendary rare breed of dragon, a Night Fury, Toothless’ black scales and quick speeds make it almost impossible to spot him at night time when he feeds. Despite this fearsome reputation, Toothless is in fact a big softie and a loyal companion to his human trainer. Our hero of the story, Hiccup, manages to shoot down and wound the wild beast but can’t bring himself to deal the final blow. Instead, the two become good friends and help to save the fellow Vikings from the monstrous Red Death, queen of the dragon nest. This astounding duo have gone on to not only grace the big screen twice, but they also star in their own TV series and have a third cinematic outing in the making.

Top honours on this list have to go to none other than the widely notorious beast from the world of J.R.R Tolkien, Smaug. Referred to as the greatest dragon of his time, the beast is the main antagonist of The Hobbit book. One of the last great Fire-Drakes of Middle-Earth, Smaug rose to prominence 150 years before the events of the novel by capturing the Dwarf-kingdom of the Lonely Mountain (Erebor) of all of its treasure, before later laying waste to the town of Dale. The tale recounts the steps of the troops who set out to reclaim the kingdom and defeat the terror. With some stunning visual effects which captured the personality of the beast and amazing voice work by Benedict Cumberbatch, Smaug came to enormous life in the recent movie adaptation. This is one nasty, quick beast you would never want to cross, with his enormous teeth, scalding hot breath and impenetrable hide. Luckily for all, the flying nightmare met his demise at the hand of Bard the Bowman.

Top 10 TV Series Based on Movies