Have you ever sat through three hours of an epic film, such as ‘Gone With the Wind’ and wondered whether it was, in fact, the longest film ever made. Well, three hours is a quick jog in comparison to the marathons that are the real movie record-breakers. Here are the top ten longest films ever made:

Clocking in with 1440 minutes at number ten, ‘The Clock’ is an art installation by Christian Marclay that won the Golden Lion award at the 2011 Venice Biennale. Highly regarded by numerous critics, ‘The Clock’ features thousands of time-related clips from films and TV shows that are synchronized to depict the actual time.

Also 1440 minutes long, 24 Hour Psycho, is another lengthy art installation by the conceptual artist Douglas Gordon, who, in 1993, slowed down the original 1960 Hitchcock thriller from the usual 24 frames a second to 2 frames a second.

Shown in its entirety for one time only in 1967, **** is a film by Andy Warhol that runs for 1500 minutes. Featuring Warholian stars such as Ondine, Ultraviolet and Edie Sedgwick, **** has scenes of drug-taking and nudity, although much of the imagery in the film is- perhaps intentionally- hard to interpret.

7. The Longest Most Meaningless Movie in the World

At the time of its release in 1968, this underground film really was the longest and most meaningless movie in the world, with a duration of 2880 minutes. Consisting of commercials, outtakes and strips of undeveloped film, the movie was directed and produced by English film-maker, Anthony Scott.

6. The Cure for Insomnia

In 1987, ‘The Cure for Insomnia’ smashed through previous records with a length of 5220 minutes or 87 hours. Directed by John Henry Timmis IV, ‘The Cure for Insomnia’ does not have a plot and lives up to its name as it consists of the artist L.D. Groban slowly reading a 4080 page poem of the same name, with occasional extracts from pornographic and heavy-metal videos. Unsurprisingly, this film has not yet been released on DVD.

Matrjoschka was produced and directed by the German experimental artist, Karin Hoerler. The film, which was first shown outside at the light spectacle, Luminale 2006, in Frankfurt, Germany, lasts for 5700 minutes or 95 hours. Again, the film does not have a conventional plotline or characters. The film is based on one photo of a boy riding a bicycle. Changes to the image occur very slowly over the course of the film.

First released in 2011, ‘Untitled~125 (Hickory’) is an experimental film by U.S artist, Josh Azzarella, and took over two years to complete. ‘Untitled #125 (Hickory)’ runs for a staggering 7200 minutes or five days. This mind-blowing film focuses on an early section from ‘The Wizard of Oz’. ‘Hickory’ is a reference to a deleted scene from the film of ‘The Wizard of Oz’ which shows a farmhand, Hickory, working on a machine intended to ward off tornados.

Currently the third longest movie ever made, ‘Beijing 2003’ is the work of director and producer, Ai Weiwei and depicts a car with a camera driving along every street inside Beijing’s ring road. The camera dispassionately records every aspect of Beijing life that appears before it. ‘Beijing 2003’, which took sixteen days to film, lasts for a challenging 150 hours.

At 6 days or 186 hours long, ‘Cinématon’ is the second longest film ever made, and it also took an extremely long time to make, as Courant conceived the idea in 1978 and spent the next 31 years making the film, completing it in 2006. The film is made of 2792 silent vignettes, each lasting exactly three minutes and twenty five seconds. Directed by Gerald Courant, the vignettes are varied and interesting as they show celebrities, artists and Courant’s friends engaged in various activities during their allotted slot, which include eating a 100-franc note and smoking a cigar. First shown in Avignon, in 2009, ‘Cinématon’ is a true test of a film-goer’s dedication.

‘Modern Times Forever’ is the currently the longest movie ever made and at 240 hours or ten days, it is a record that will take some beating. ‘Modern Times Forever’ was created by a Danish art group, called Superflex. The film shows the affects of thousands of years upon the Stora Enzo Building. It was originally screened in the open air in Helsinki Market square so that viewers could see the original building at the same time. 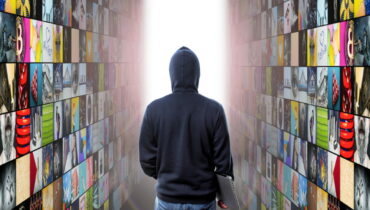