Gamers are gluttons for punishment. Few things in this world can beat the preservation of a determined gamer who will try time and time again to finish that tricky level or frustrating end-game boss. However, not all in-game deaths are easy to take lightly. Sure, some games of yesteryear would just show your avatar flashing into nothingness or have it replaced by a gravestone when you die, but others take joy in showing you just how grisly death and failure can really be. 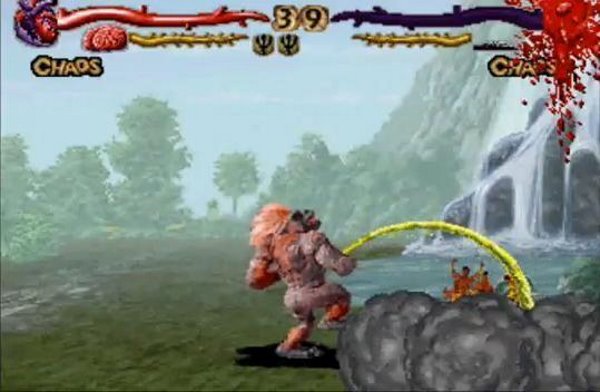 Primal Rage was a fairly forgettable arcade fighting game published by Atari back in 1994. The bloody brawler didn’t set the video game world alight, but it manage to generate some controversy thanks its gory gameplay. In fact, the game was even briefly pulled from shelves due to the graphic nature of one of its finisher moves, ‘The Golden Shower’. This move saw the ape-beast character Chaos dissolving the flesh from his victims with a jet of acidic urine, and programmers had to censor the move to allow the game to be re-released. The death animation is quite tame when compared to the gory standards of most modern video games (other death animations in the game are far more bloody, too) but it definitely deserves a mention just for the novelty factor.

Burning is probably one of the most common ways to die in a video game, but that certainly doesn’t make the prospect any less horrific. Many games across the generations have included this old style of execution and it’s a common sight in fantasy games to see a spell wielding character striking down foes with combustion blasts which sear the flesh from their bones. A good recent example of this can be seen in Bioshock: Infinite. Thanks to the ‘Devil’s Kiss’ vigor, plays can throw fiery grenades from their fingertips and even ignite fuel puddles to cause havoc. Other inventive upgrades include being able to kill with the help from a controllable murder of crows, but being burned alive still definitely sucks. 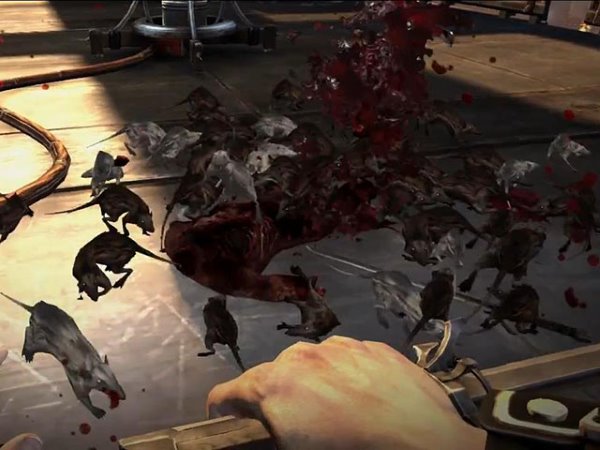 In Dishonored players are encouraged to play through the game the way they want to. This means that you can stealth your way through and only engage guards in the event that you’re seen or you can simply think “screw this” and slaughter everyone in sight. During the game the city of Dunwall is being ravaged by the Rat Plague, a deadly disease that wiped out half the population. The reason the plague is so important is because you can learn a spell which, when fully levelled, lets you summon a hordes of rats that will devour anyone who gets in your way. Now just imagine for a second that you’re a guard on patrol when all of a sudden a black pool appears around your feet. Before you can react or call for help dozens of rats hop out of the pool and start eating away at you faster than anything you’ve ever seen. 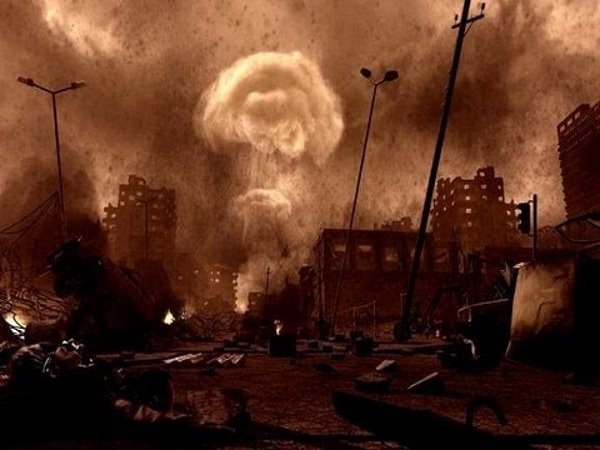 In the ‘Shock and Awe’ mission from Call of Duty: Modern Warfare, players take control of Sgt. Paul Jackson as he tries to capture big bad guy Khaled Al-Asad. The mission ends with a helicopter extraction but, just as you get clear of the city, a nuke detonates and downs the chopper. The ensuing shock wave knocks the helicopter out of the sky and it spins to the ground. The screen cuts to black and players take control of Sgt. Jackson again as they crawl out of the wrecked vehicle and around the destroyed city as a huge nuclear mushroom looms in the background. The screen eventually fades out to white as Jackson sucuumbs to the effects of the explosion and finally dies – and the player can do absolutely nothing about it.

6. Impaled and fed to a shark – Injustice: Gods Amongst Us 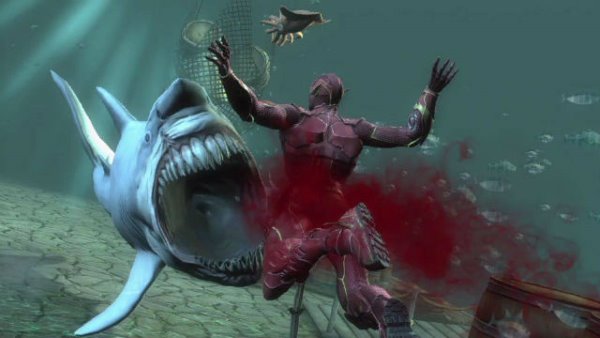 Aquaman proved once and for all that he is not a superhero to be messed with in Injustice: Gods Amongst Us. Though technically it’s not a death animation as this wonderfully inventive move doesn’t always kill the opponent (although it deals some heavy damage), the King of Atlantis is able to summon a huge tidal wave which downs his enemy so that he can impale them through the abdomen with his trident. He then skewers his foe into the air and uses them as pet food for a giant shark who swoops by and takes a massive, bloody chunk out of them.

Decapitation is hardly a unique feature in video games, but it’s typically quite a gruesome way to send a foe to an early grave. God of War 3 really showed us just how grisly this method of execution really can be. The series earned a reputation for the over the top way protagonist Kratos kills whatever stands in his path, but sometimes the simplest kills are the best. What makes the death of Helios work so well – compared to countless other beheadings – is that his head doesn’t just simply fly off from the shoulders. Players really have to work for the execution by mashing the R1 and L1 buttons as Kratos grips Helios’ head and pulls it backwards. His neck finally tears and a geyser of blood sprays up as Kratos proudly holds his enemy’s decapitated head in the air. 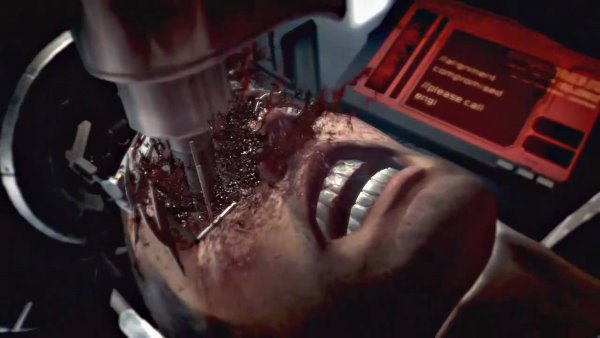 The Dead Space series really takes pride in its death animations and sometimes it’s worth messing up just to see some of the gloriously gory sequences developers have put in the game. In the series, player controls Isaac Clarke; a ship system engineer who must fight his way through a mining starship infested with an alien scourge. The crew has been slaughtered and their corpses have been reanimated into “Necromorphs”. These creatures bring with them some new and ghoulish death animations, but one of the worst comes courtesy of a spot of laser eye surgery. During the second game, players have to strap Isaac into a machine to retrieve some information buried deep in his brain. Trouble is, this requires a needle to the eye. Players have to carefully guide the needle in line with Isaac’s pupil. If they fail this inventive mini game section the needle slams down into his eyeball and drills deep into his brain. 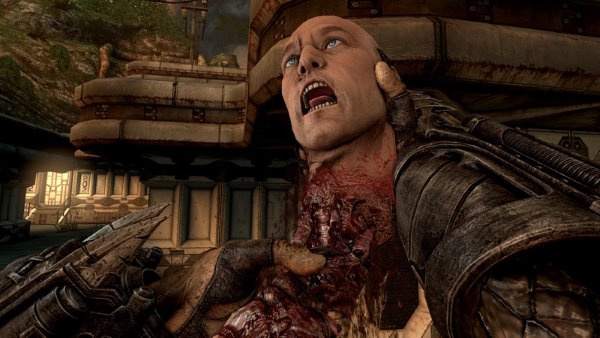 The Predator movies terrified shocked movie fans with a truly bloody way to die. The extraterrestrial hunters loved taking spinal columns and skulls as trophies, so they had a pretty impressive knack of ripped these bones straight from a human’s body. The thought of having every nerve receptor in your body yanked out of you in one swift motion is pretty horrific, so the death animation naturally made it’s way into the Aliens Vs. Predator video game series. Credit also goes to underrated horror FPS The Darkness 2 which features a memorable take on the ‘spine rip’ by having it performed courtesy of some vicious tentacles. 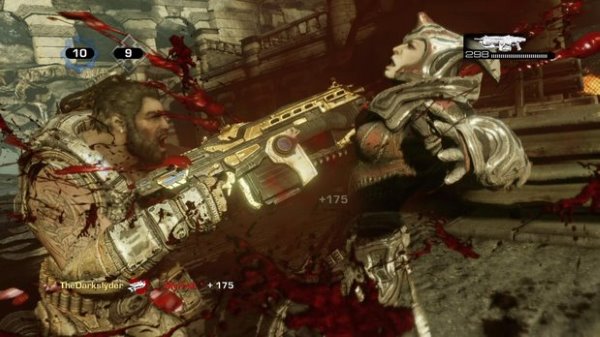 The Chainsaw Bayonet featured in the Gears of War series is one of the most iconic weapons featured in a video game and also one of the most ridiculous – you really have to wonder what was going through the mind of the army in the Gears of War universe when they thought that a chainsaw would make for the perfect bayonet. It’s definitely a violent way to off some enemy AI, but it’s oh so satisfying when you do it to another player in an online multiplayer match. Using the chainsaw reduces whoever you come up against into a pile of gory body parts and the ensuing bloodbath is really something to be seen. However, if you think the frontal assault is bad, just wait until you manage to shove it into the back of an unsuspecting foe.

It only makes sense that a series that helped start the ESRB rating would make the number 1 spot for ridiculous video game death animations. Every character in Mortal Kombat has a fatality which is truly cringe worthy and over the top. Mortal Kombat takes blood, guts and dismemberment to a whole new level. Players can watch their characters have their heads blown off, get sliced in half, be incinerated, get beaten to a pulp with a bunny, have their soul ripped from their body, be eaten by a dragon, get bludgeoned with their own dismembered leg and, if they’re lucky, have their spine ripped out. Not only did Mortal Kombat pave the way for other gory video games to really go to their furthest limits, but it also performed many of these death animations first.