William Shakespeare lived from 1564 to around 1616 and is the greatest English writer ever. Not only is his body of work more or less intact after all these centuries, he is also survived by a wealth of vocabulary, words and sayings that he coined in those works. Here are his top ten plays: 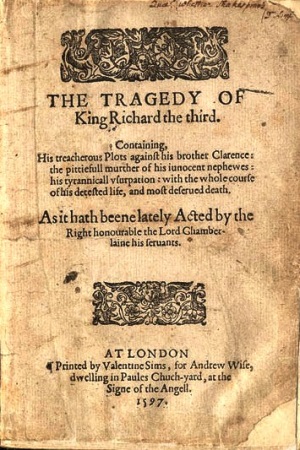 ‘A horse, a horse, my kingdom for a horse,’ this saying is perhaps the most famous from this play about the ugly monarch, apart from perhaps the line about ‘the winter of our discontent’! The ugliness of Richard’s exterior is echoed by his inner ugliness, which sees him planning to use and kill his brother, his wife (her murder was planned the moment she accepted him!). Perhaps the worst act of Richard’s is that of killing his twin nephews, young boys that he had imprisoned for some time in the tower. His slow climb, over the bodies of friends, enemies and family members alike soon peaks and his brief popularity over, Richard is killed in a battle, during which time his supporters ebb away to join his enemies.

9. Much Ado About Nothing 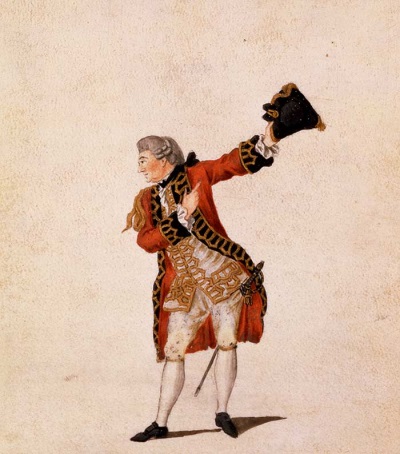 This heart-warming comedy is based upon that oldest of all stories; a love story. The apparent main characters, those of Hero and Claudio soon give way to another, most interesting pair. The soon-to-be happy couple, Benedick and Beatrice, seem to detest each other in the beginning, carping on each other’s fault in fine sarcastic form and seeming to denigrate the other unceasingly. The tale is as full of misdirection, rumour and gossip as any celeb website today, and the audience can do little but follow the storyline breathlessly, hoping to catch every amusing titbit as it falls from the player’s mouth! The local Watch (a primitive police force) are bumbling fools that are a delight to watch, especially Dogberry who is a master of malapropisms. The tale ends, as would be expected of a love story, with a happy ending for both couples, with the villains neatly in custody. 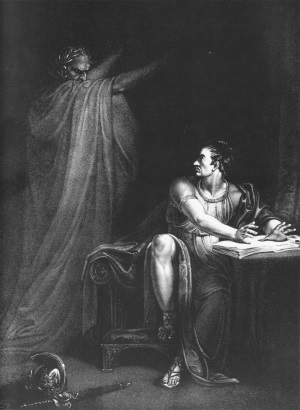 This play is based on historical facts and takes place after Caesar has become powerful following years of successful invading and conquering all over the known world. Fearful that Caesar would seize power and become some kind of dictator or absolute ruler of Rome, a group of senators conspire to incite Brutus, Caesar’s erstwhile friend, to murder Caesar. Brutus, swayed by ‘public’ opinion (in truth, a series of letter is disguised handwriting from one of the senators) agrees to the murderous act and stabs Caesar. Initially, the senators and Brutus claim that their bloody act was justified, but Mark Anthony, in that famed speech beginning with ‘Friends, Romans and countrymen, lend me your ears’, sways public opinion against the killers, especially when he showed the crowd the bloodied and battered body, along with producing Caesar’s will in which he stated that every citizen was to have 75 drachmas. Ultimately, Brutus, unable to claim a clear victory in his next battle, falls on his sword and the play ends with a tribute to him, uttered by Anthony, in which he is praised as being ‘the noblest Roman of all’. 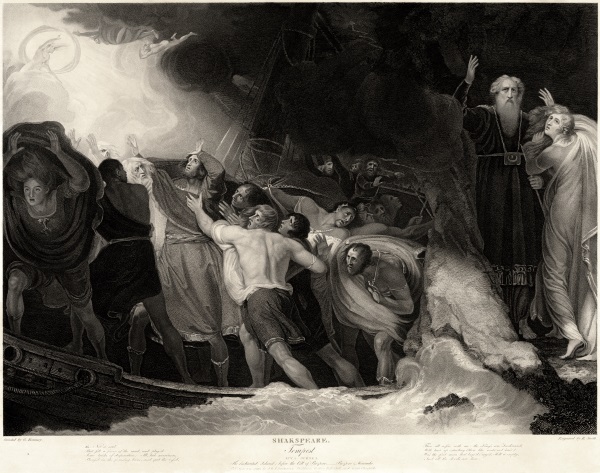 The Tempest has a fairly complex story line for Shakespeare, mainly because it follows three distinct tales, all weaving through and around each other. The first tale is that of Prospero, a magician who conjures up the storm for which the play is named, and his battle with his brother. There is also the tale of Caliban, a monster initially adopted but then enslaved by Prospero for the attempted rape of Miranda, Prospero’s daughter, and his attempts to overthrow Prospero along with his accomplices. The final tale is, as is fairly typical of Shakespeare who had a great understanding of human nature, a love story. The lovers are Miranda and Ferdinand, the son of the King of Naples. The tale ends with an almost Agatha Christie-like denouement, with all the characters being brought before Prospero for forgiveness, counsel or simply to complete the tale. Prospero himself states that he will, henceforth, give up the practise of the magical arts. 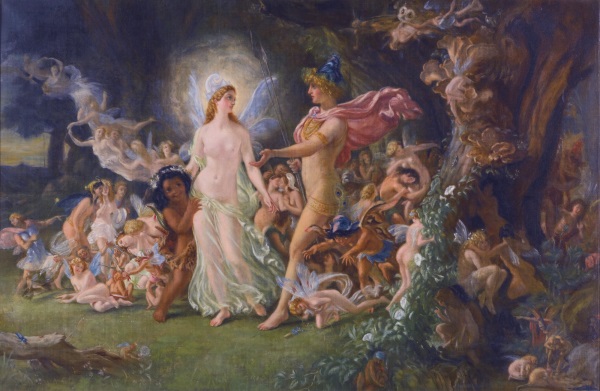 This fantastical play is set in Athens and features the adventures in love and life of a group of young people, as well as a fairy-tale featuring the King and Queen of the Fairies, their romantic antics and their fascination with and manipulation of the humans they encounter. All the strands of the stories are enthusiastically disarranged by Puck, a mischievous fairy who is the servant of Oberon, the King of the Fairies, who is ultimately responsible for Titania, the beautiful fairy queen, falling in love with Bottom, a rough and ready amateur actor whose head has been transformed into that of a donkey by the irrepressible elf. The tale ends with the fairies arranging matters so that the humans all believe that the events of the past night were nothing more than a vivid dream (hence the title of the play) and make amends by visiting their house with good fortunes. Puck remains alone on the stage to suggest to the audience that they have not really witnessed a play – perhaps it was all a dream for them too! 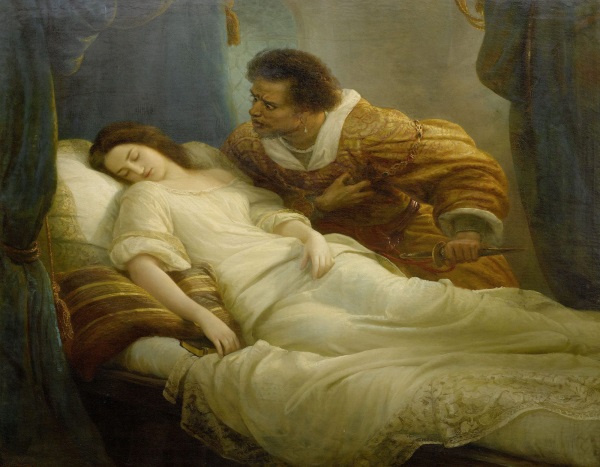 The play that gave the world the villainous and manipulative Iago, Othello is one of Shakespeare’s more famous plays. The fact that the cast list is relatively small may also have something to do with the Moorish play’s popularity. Known as a tragedy for good reason, it is unwise to become attached to many of the characters as they all, egged on by Iago for unknowable motives, kill, stab and otherwise attack each other, until the end, when Othello comes to the belated realisation of Iago’s part in matters, stabbing him in turn, but not fatally as he wished him to live in pain for the rest of his days. Othello, arrested for his part in the many murders, commits suicide… 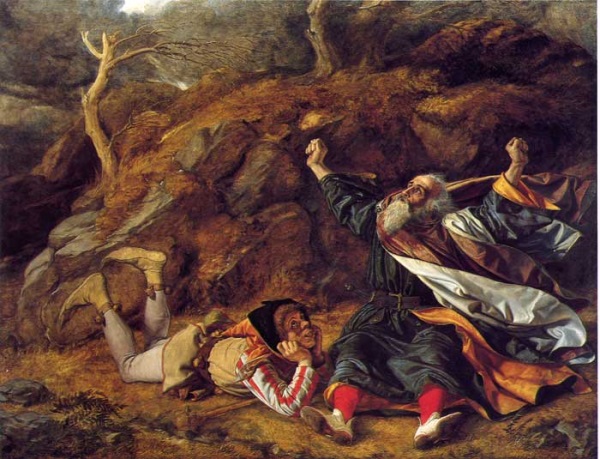 Another of Shakespeare’s tragedies, King Lear is the tale of an arrogant king, growing older and unappreciative of the truth. When asking his three daughters for proof of their love for him, he laps up the lavish and unlikely compliments of his two older daughters, Goneril and Regan and sneers at the dutiful and truthful answers of his younger (and, at that time, favourite) child, Cordelia. He divides his kingdom between the two elder daughters and descends rapidly into madness. He plans to divide his time equally between the two elder daughters, not realising that their fulsome praises were fake and that, in reality, they care nothing for their father, thinking him an old fool. All three daughters ultimately end up dead, and Lear, in his grief, withstands several suggestions that he resume the throne, handing over the reins to either Albany or Edgar, depending on which version of the play you read, quarto or folio. 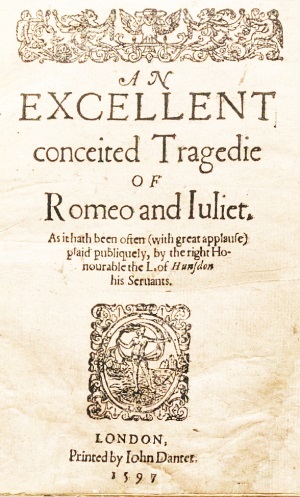 Known as the ultimate love story, Romeo and Juliet is Shakespeare’s most popular play today, as, indeed, it was during his lifetime. The Montagues and Capulets are sworn enemies until Romeo Montagu meets Juliet Capulet at a ball. (Ironically, Romeo’s presence at the ball was purely to help his cousin get together with one of Juliet’s cousins, a girl called Rosaline. It is love at first sight and the young pair agree to marry, aided in this by a friar who hopes to reconcile the two families. Juliet takes a drug that will put her into a death-like coma, sending a message to Romeo to join her there in time for the effects to wear off. Romeo does not get the message and, not realising his love is actually still alive, takes poison and dies next to her. When she awakes, she realises that he is dead and, heartbroken, uses his dagger to stab herself so that they can be together in death. 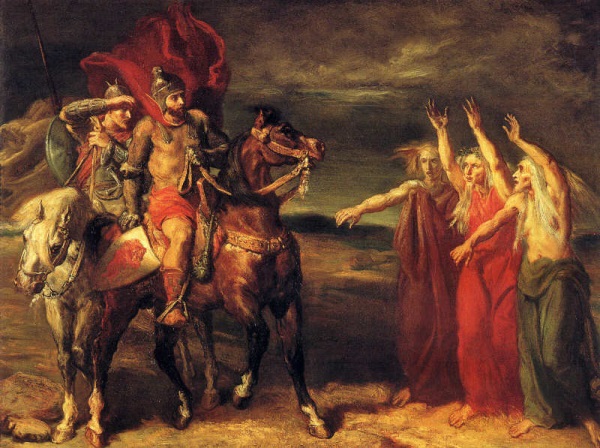 This Scottish tale of regicide, murder and hard-headed feminine power, Macbeth is one of the most popular of Shakespeare’s tragedies. The play portrays clearly how a guilty conscience and criminal knowledge can work on a man’s soul, corroding and destroying his peace of mind and sanity. Best known for the three witches who predict Macbeth’s rise to power, setting him on the path to his own destruction, the play is also one that is the subject of more superstitions than almost any other play currently being enacted in theatres around the world. Having decided to snatch at the power offered by the witches prophesy, Macbeth seems helpless to stop himself from killing and killing again in order to keep his throne. His wife, complicit in the murder of Duncan, begins to lose her mind, rubbing constantly at imaginary bloodstains on her hands and muttering to herself. She eventually kills herself. Macbeth, while apparently invincible according to the words of the prophesy, is eventually brought down and beheaded by MacDuff, a man who was ‘not of woman born’ due to his mother having been subject to a Caesarean section birth. 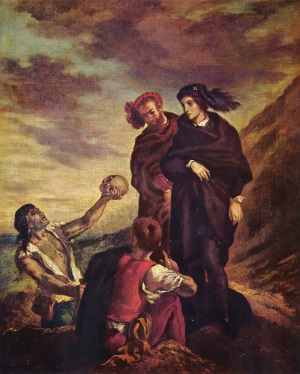 Another of Shakespeare’s tragedies, Hamlet features the tale of a young prince, grief-stricken by the death of his father who was murdered by his brother (Hamlet’s uncle) who then hastily married the king’s widow and seized the throne for himself. The impending war with Norway, imminent at the beginning of play, probably helped Claudius to get away with his homicidal impulses as the country would have needed a strong and stable leader as soon as possible following the death of the previous monarch. Hamlet is distressed by his mother’s rapid remarriage and is unmoved by the new King and his Queen’s blandishments to get over his mourning as soon as possible. He sees his father’s ghost, whereupon the phantom reveals that it was Claudius that had killed him (by pouring poison into his ear). Hamlet decides that he needs actual proof of the crime and therefore decides to stage a play of the murder, planning to watch Claudius’ reaction to the drama. There follows a dramatic period during which many people are killed, both accidentally and purposefully, before, while there are still one or two cast members still alive, Hamlet manages to kill Claudius and declare a successor, before he dies in turn!

Where do you think Shakespear ranks in the top 10 best selling authors of all time?

Top 10 Most Expensive Paintings in the World