Most amusement parks don’t really bring anything new to the table. Sure they all have different themes and rides, but most are content with the usual roller coasters, attractions, sideshows and parades that we’ve all seen time and time again. However, there are a special few places which are less ‘conventional’ in how they provide fun and entertainment to their guests. Here are some of the most weird and wonderful theme parks the world has to offer. 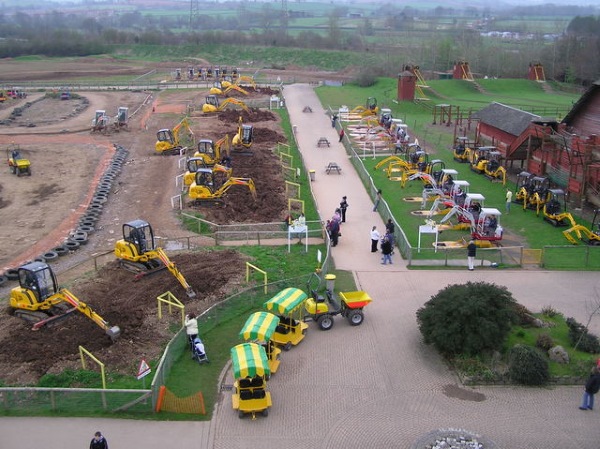 DiggerLand is an amusement park which gives adults and kids the chance to ride extremely dangerous-looking construction equipment – the park even boasts that no license is required to drive around in any of the vehicles. Even though most of its promotional materials feature photographs of people basically sitting in tractors and big yellow diggers, DiggerLand audaciously calls itself the “ultimate adventure park experience”. Admittedly, the British do have something of an obsession with this kind of thing and most kids will love being able to move dirt back and forth in mini excavators. Other activities feature JCBs, mini tractors, bumper trucks and other types of equipment, and the amusement park has even converted some bits of heavy machinery and turned them into rides. The Spin Dizzy, for example, is a huge JCB tracked digger where guests sit in the bucket on the front of the machine and get spun around. The whole experience may sound a little bit too hillbilly for some people, but DiggerLand has 4 parks across the UK so they must be doing something right. 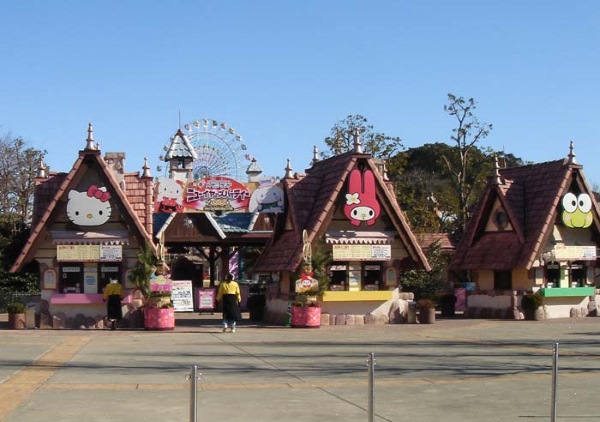 Hello Kitty is big business in Japan – so much so that they’ve built an entire theme park dedicated to the Sanrio brand. Fans of Hello Kitty and her friends will be delighted visiting this thoroughly cute park where they can go inside Hello Kitty’s house, buy lots and lots of merchandise, enjoy rickety-looking rides and watch trippy parades. However, apparently it’s only worth making the trip if you’re a very serious fan as the park has seen better days and is said to be in serious need of renovation. 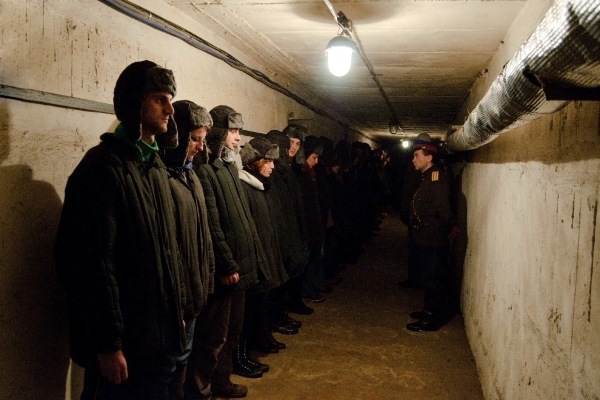 Išgyvenimo Drama, AKA Survival Drama, is the theme park of choice for people who want to experience a day in the life of a USSR citizen during the 1980s. Located in an ex-Soviet bunker in the countryside, guests can expect a pretty intense two and a half hour experience as they are ordered around by abusive, overbearing guards and have their will broken in true Soviet fashion. After heading down into the bunker participants can expect to be humiliated, interrogated, subject to propaganda and even coerced into signing false interrogation papers. The theatrical/educational experience is apparently so intense that all guests have to sign a waiver before they advance and the organisers boast that they have so many people fainting that most of the guards have to carry smelling salts. 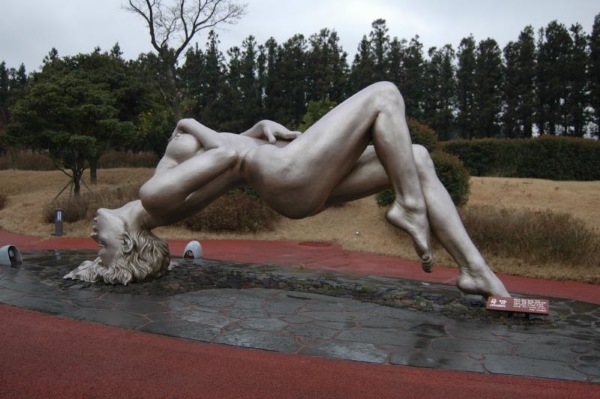 Love Land is a strictly adults only theme park which contains more than 140 sculptures dedicated to eroticism and the wonders of sex. Although referring to an outdoor sculpture garden as a theme park may seem like a bit of a stretch, there’s no denying that Love Land entertains countless intrigued guests who come from all over the world to marvel at the barrage of phallic and genitalia themed imagery. While some of the sculptures are quite ‘arty’ many more are delightfully crude and vulgar, such as the statue of two cartoon dogs humping each other or the the one which shows a man lying under a sheet with a huge erection poking skywards. 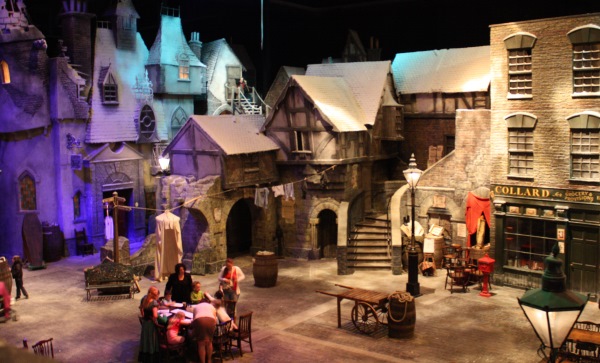 Those who fancy more highbrow fare can’t go wrong with Dickens World; a theme park based on the works of literary icon Charles Dickens. The theme park offers a step back in time to the days of Victorian London and provides guests with a 90 minute interactive tour around a deliberately grotty huge site which has been remodelled to look like Dickensian England. Dickens World promises an authentic experience and employs actors with questionable cockney accents to stay in character as guests wander around the cobbled streets and dingy buildings. It’s a good effort, but most kids will probably prefer the Harry Potter tour instead.

It may not be as weird as some other entries on this list but DubaiLand deserves special mention for just how big and impressive the site is. If it ever opens, of course. Built on a 107 square mile plot of land and set to be finished before Dubai’s hosting of the World Expo in 2020, DubaiLand promises to be twice the size of Disney World Resort in Florida and will contain the largest collection of theme parks in the world. The huge project has massively exceeded its budget of $60 billion and development was hit hard by Dubai’s financial crisis. Construction paused for 5 years between 2008 and 2013 but it is now said to be back on track. However, many big theme park brands – including Universal Studios, Marvel, Lego Land and Six Flags – have pulled out of their involvement in the park. Nearby Abu Dubai does have a park which can entertain thrillseekers in the meantime. Ferrari World is the largest indoor amusement park in the world and is also home to the record-breaking roller coaster The Formula Rossa. The launched ride reaches its top speed of 150 mph in less that 5 seconds so all riders have to wear protective eye goggles for their own safety.

kidZania is a chain of worldwide theme parks which give children the opportunity to live as adults. The parks contain “real, kid-sized cities”, which come complete with miniature vehicles driving around, where they can try their hand at some educational and realistic career-based roleplaying. kidZania contains fake miniaturised versions of hospitals, police stations, shops, banks, restaurants and even an airport. Each job takes about 25 minutes to complete and kids are paid in kidZania’s own brand of currency kidZos. Some roles are definitely more interesting than others as kids can try their hand at surgery, dentistry (both presumably not on live subjects) and piloting aircraft (again, not the real thing). However, other jobs like delivering post, changing tyres or working at McDonalds (kidZania is packed with brand advertising) are depressingly mundane.

Bon Bon Land was created by Danish sweet connoisseur Michael Spangsberg after he made his name creating weird branded sweets with names like hundefutter (dog farts), mågeklatter (seagull poo) and rådne fisk (rotten fish). The brand was so popular that this vulgar Willy Wonka decided to open up his own theme park with similarly whacky results. The popular 34 acre park is well known for its visual gags and contains statues and ride designs which include a giant, anthropomorphised turd, a cow fondling her own breasts and a rat puking up. However, the highlight has to be the Hundeprut Rutchebane (Dog-Fart Switchback) – a rollercoaster built entirely around the concept of dog farts. 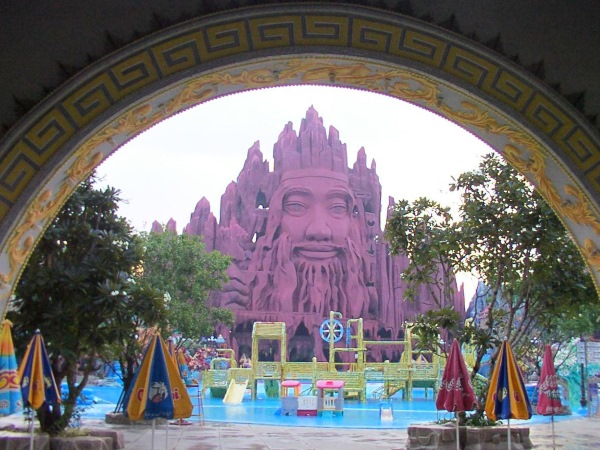 Suoi Tien is the perfect place for those who seek enlightenment from their theme park experience. The unique Buddhist-themed site was built to commemorate the religious teachings of Vietnamese culture, but most people probably go there for the huge waterpark in the centre of the park. Suoi Tien is full of visually impressive and colossal-sized Buddhist statues and decorations which could put Disneyland to shame and also features plenty of rides and attractions. It also has some less conventional entertainment options like live crocodile feeding and a massive bat cave. However, its weirdest feature has to be the ‘Unicorn Palace’. Don’t let the cutesy name fool you as this is actually a chamber which depicts the Buddhist idea of hell. It comes complete with disturbing screams, severed heads and the types of punishments on offer in the afterlife. 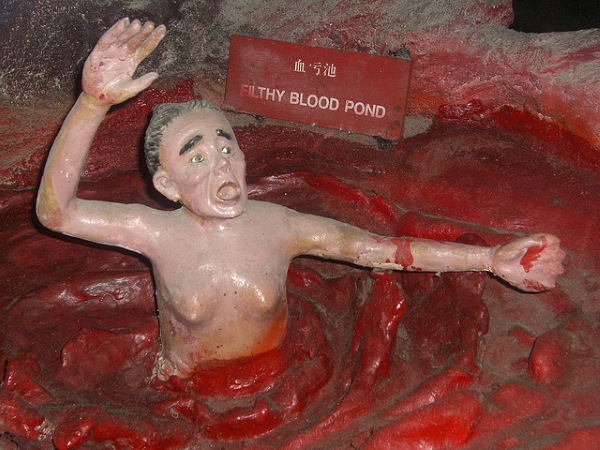 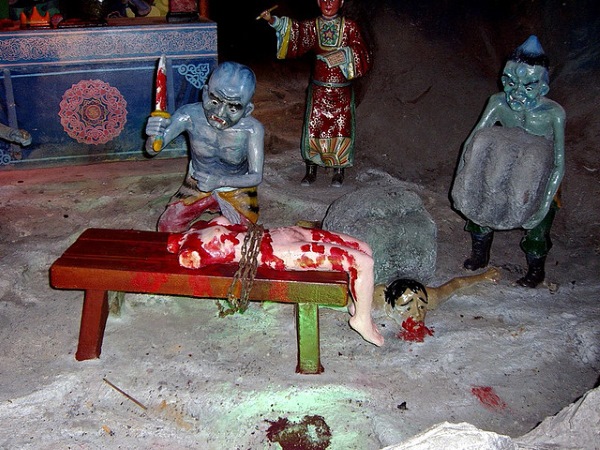 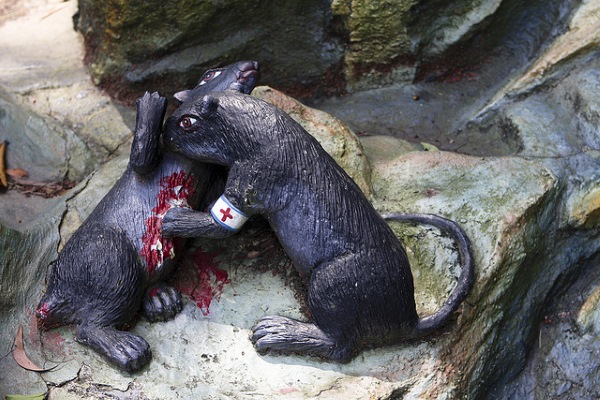 Haw Par Villa is similar to Suoi Tien in that it is a theme park dedicated to Chinese mythology and Buddhist, Taoist and Confucian folklore. However, unlike Suoi Tien it contains no rides or rollercoasters and is instead full of dioramas and statues. Sadly, most of these exhibits don’t provide a scenic, relaxing day trip as they are pretty grotesque and surreal. Bizarre sights include crabs with human heads, rifle-carrying soldier monkeys and an old lady suckling at the breast of another woman. However the highlight has to be the Ten Courts of Hell; a series of miniature dioramas which show how certain sinners will be punished in the afterlife. These cheerful scenes of torture include people being impaled, having their hearts and organs pulled out and being smashed into bloody chunks by giant mallets.

Top 10 Conspiracy Locations in the World