Whether actors want to poke at themselves or filmmakers want to surprise the audience, movie cameos are always a fun treat. However, some cameos are definitely a bit stranger than others, and they can leave audiences scratching their heads at what has just happened or wondering why a certain actor has unexpectedly appeared in a scene.

An entire list could be dedicated to cameos from the Marvel movies. There’s the post-credit teases, background blink-and-you’ll-miss-it titbits and, of course, the mandatory Stan Lee appearance. However, while even casual fans would understand the appearance of Nick Fury at the end of Iron Man or the tease about the Avengers Initiative at the end of Captain America, even veteran comic book readers were slightly confused about what happened at the end of Thor 2: The Dark World. The scene shows The Collector (played by an unrecognisable Benicio Del Toro in a bizarre blonde wig) being handed the Aether by Thor’s allies Volstagg and Sif. Although the scene is slightly baffling, it is a very revealing clue for the future of the Marvel Universe. The next ‘phase’ of Marvel’s movies will introduce the Guardians of the Galaxy and more cosmic-based storylines, and The Collector’s cameo hints at the importance of the powerful Infinity Gauntlet in future movies.

Bruce Willis has always been a good sport when it comes to making uncredited appearances. He’s had brief roles in Loaded Weapon, Four Rooms and The Player, but his weirdest cameo has to be in Oceans 12. The stylish heist sequel features a running joke that Julia Robert’s character Tess looks an awful lot like the actress Julia Roberts. When the gang’s original plans to steal the priceless Faberge Imperial Coronation Egg go awry, they hatch a new plan for Tess to pose as Julia Roberts so she can get close to the egg and steal it. However things get complicated when Bruce Willis, playing himself, shows up and thinks that Tess is in fact the real Julia Roberts. It’s a strange, tongue-in-cheek cameo which fits the rest of the movie’s breezy tone.

Simon Pegg and Edgar Wright scored a surprise box office hit when they stepped up from their cult TV show Spaced to make British Horror movie Shaun of the Dead. For their follow-up Hot Fuzz, they enlisted the help of a whole host of well-known actors for small bit parts, but there are two cameos in the film which are much harder to spot. A brief, two second flashback shows Nicholas Angel (Simon Pegg) being stabbed through the hand by an enraged person dressed as Santa Claus, and the crazed attacker is played by none other than Oscar winning Lords of the Rings director Peter Jackson. However, even harder to recognise is Cate Blanchett playing Nicholas’ ex-girlfriend Janine. Although her character has speaking lines and she is on screen for a minute or so at the beginning of the movie, Blanchett is wearing a white forensic coverall suit and a face mask for the entire scene. 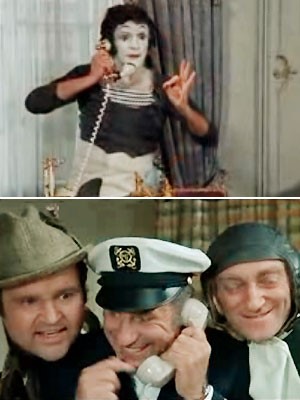 Comedy legend Mel Brooks has lampooned almost every movie genre throughout his illustrious career, but this parody of silent films is his most audacious effort. Mimicking the slapstick comedies of the early 20th Century, Silent Movie is filmed in black and white and is completely silent apart from the musical score and the occasional sound effect. However, a brief, audible line of dialogue is given to one actor. Brooks’ movie director character tries to enlist the help of the “world’s most famous mime”, so he picks up the telephone and begins dialling a number. The receiving end of the phone line is revealed to be a Paris apartment, and acclaimed mime Marcel Marceau picks up the phone (after a minute or so of pretending to be blown away by the draught from the apartment’s open window) and is offered the starring role in the first silent movie in 40 years. There is a deliberate pause before Marceau screams “NO!” down the line. Of course, Brooks knew that there was a certain amount of irony in having the world’s most famous mime speak the only line of dialogue, and Marceau’s appearance makes it the most memorable scene in the movie.

Spoof horror Zombieland is a comedic take on the zombie genre, and the movie follows a plucky band of survivors trying to figure out what to do when the world is suddenly overrun by hordes of the undead. The gang make their way to Hollywood, and Woody Harrelson’s character Tallahassee suggests that they try and find his favourite actor’s house. In a funny twist, the mansion they find themselves in is Bill Murray’s and, in an even more unexpected reveal, Murray is alive and well (although he has taken to dressing up as a zombie to fit in). The movie has a brief detour and takes the time to joke with Murray and poke fun at his career with a few tongue-in-cheek references. With any other actor it might come across as distracting, but Murray’s deadpan humour fits in perfectly with the vibe of Zombieland. 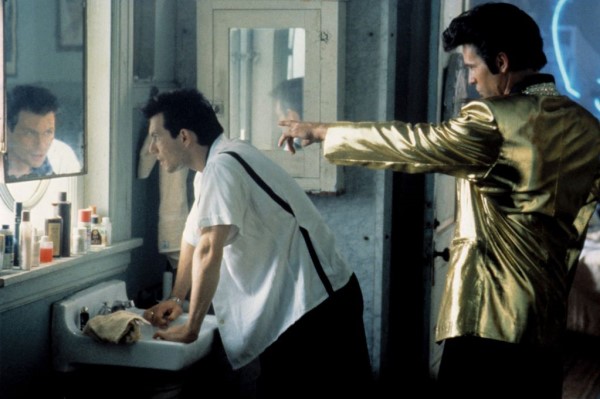 Tony Scott’s hyperkinetic crime movie follows the path of two young lovers Clarence and Alabama (played by Christian Slater and Patricia Arquette respectively) who get in over their heads with the mafia, drugs and violence. Interestingly, Val Kilmer was originally interested in the part of Clarence and tried to convince Scott to cast him (the two had worked together on Top Gun), but Scott had another role in mind. Clarence is obsessed with Elvis Presley, and he sometimes hallucinates having conversations with the King of Rock ‘n’ Roll. Kilmer takes on the role of Elvis and, thanks to some careful camera shots, it’s hard to see that it is him in the role. He’s only in a few, brief scenes (and like most cameos Kilmer goes uncredited), but Kilmer makes the most of his brief appearance with a spot-on Elvis impersonation. 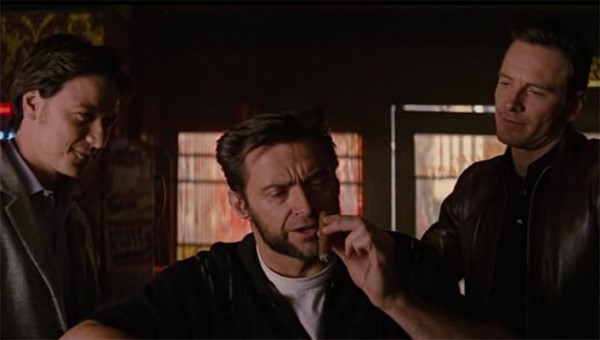 Matthew Vaughan revitalised the X-Men franchise with his 2011 take on some of the comic’s original characters, and it was a fresh, retro way to spark new life into the series. However, the director couldn’t resist tying the origin story into the original trilogy, and Hugh Jackman agreed to make a very brief cameo as Wolverine. The surprise appearance is a nice nod to the original series and it doesn’t overshadow the new characters or the revamped timeline. 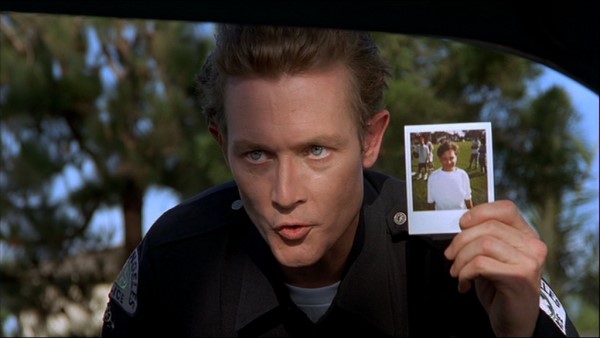 It’s always strange when two movie universes collide, but it’s even weirder when one of them is a comedy and the other a violent sci-fi series. In the seminal 90s comedy movie Wayne’s World, protagonist Wayne (Mike Meyers) is driving along in his car when he is pulled over by a motorcycle cop. Approaching the car and taking off his helmet, the cop is revealed to be the T-1000 (Robert Patrick) from Terminator 2 and he is still looking for the character John Connor. Patrick plays the scene completely straight, and it really does feel like he’s briefly wandered into the wrong movie. 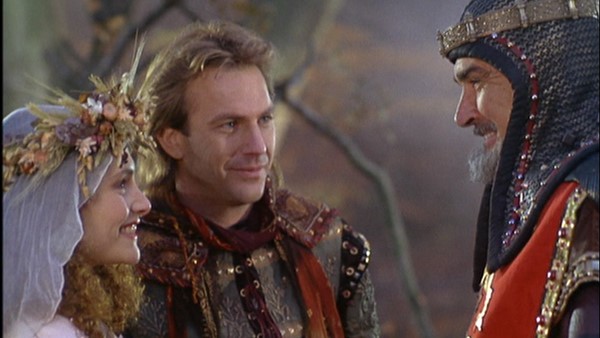 Kevin Costner’s Robin Hood is a big, Hollywood epic which rewrites the history books, but it’s still strange to see a mostly American cast take on an English legend. However, the end of the film offers a refreshing sight when Sean Connery suddenly appears as King Richard in the movie’s closing scenes. Although the cameo is unexpected and he only has a few lines, Connery’s presence offers gravitas and a big ending to the movie.

1. Arnold Schwarzenegger – The Rundown/Welcome to the Jungle (2003)

For years, fans of action movies wondered who could follow in the huge footsteps of genre legend Arnold Schwarzenegger. It wasn’t long before wrestling star The Rock (Dwayne Johnson) started making waves in Hollywood, and he seemed to be instantly comfortable bringing his wrestling theatrics and showmanship to the big screen. In a very brief scene at the beginning of The Rundown, Schwarzenegger walks past The Rock in a bar and says “Have fun”. It’s over in a second, but Arnie is clearly passing on the action movie torch to the next generation and it’s an important, if brief, cameo.