Violent movies have always been the subject of controversy. Whether it’s being used for gratuitous, over-the-top shock value or uncompromising, disturbing realism, scenes of movie violence have been accused of causing (or at least contributing to) countless social issues and crimes over the years. Few things in movies can be as visceral and disturbing as a well-done violent scene (even if it’s merely implied), but violence can also be schlocky and entertaining. Some of the movies on this list are so controversial and shocking that they were banned in many countries when they were originally released, and all of them are definitely not for the squeamish or faint-hearted. 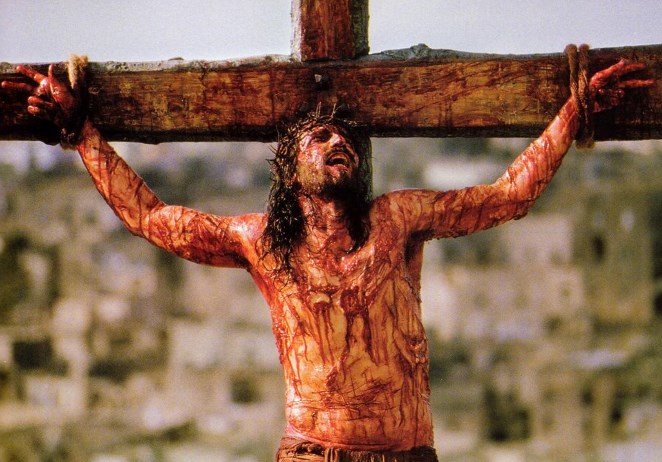 No one could have predicted what a religious epic directed by Mel Gibson with entirely Latin dialogue would turn out like, but chances are few people thought it would end up being one of the most violent movies ever. Re-enacting the final days of Jesus Christ, the movie features some extremely brutal and prolonged scenes of beating, flagellation and crucifixion. Surprisingly, despite the movie’s over-the-top bloody nature, church groups and devout Christians lapped it up and bought their tickets in droves. 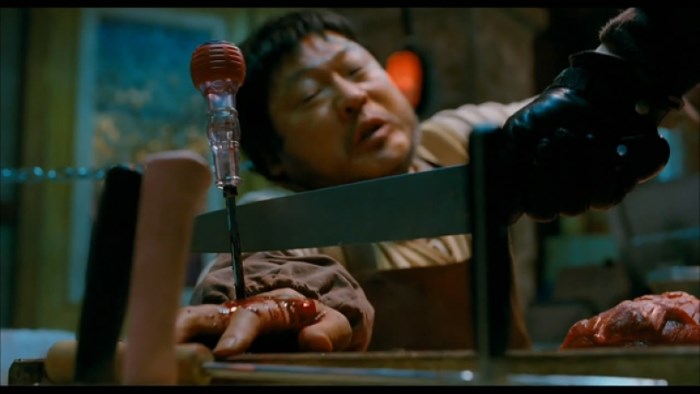 Most serial killer movies are typically grisly affairs which make the audience watch in tense anticipation as the police gradually circle in on the deadly criminal. Violent Korean thriller I Saw the Devil put a new twist on the genre and turned it into a much deadlier game of cat and mouse. When the wife of secret service agent Soo-hyun is brutally murdered by the predatory Kyung-chul, a distraught Soo-hyun captures the serial killer and plants him with a device so he can keep tracking him down and torturing him before releasing him. The bloody revenge thriller packs a serious punch with the graphic violence escalating between the two men as they play their back and forth game which draws other victims into Kyung-chul’s clutches. 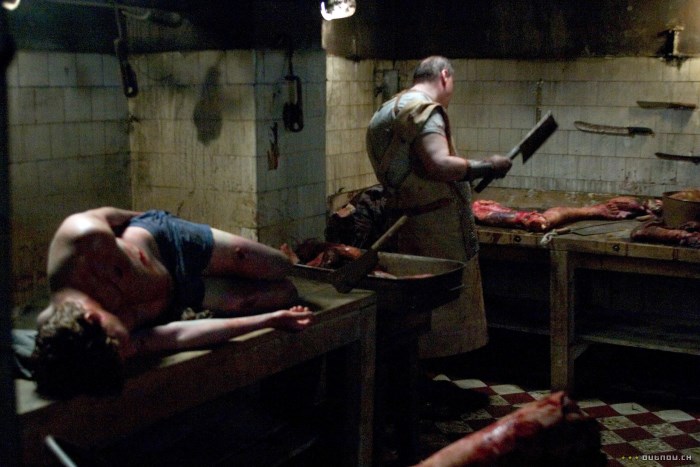 The rise of ‘torture porn’ movies in the mid-00s led to countless criticisms that horror had sunk to a new level and was scraping the barrel of tasteless, gratuitous violence. However, this was really nothing new for the genre and most of these new movies paled in comparison to the early exploitation horror movies of the early 70s. Most of the blame fell on the Saw and Hostel franchises, but only the latter really managed to deliver in terms of truly nasty violence. While the elaborate death traps of Saw were always just a little too silly and contrived for their own good, the brutal simplicity of Hostel felt very real. Set in a shady European factory where rich businessmen can pay to essentially torture a person to death, the victims in Hostel are tied to a chair while their killers choose from a variety of drills, scalpels, saws or any other sharp or blunt instrument which catches their fancy. The sequel one-upped itself in levels of gore and creative kills, but it wasn’t quite as effective as the original. 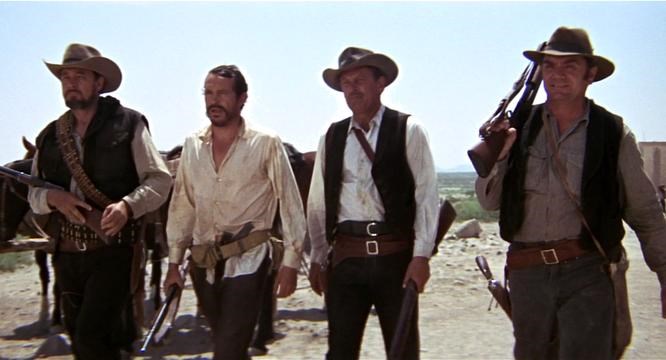 Sam Peckinpah’s violent western The Wild Bunch was threatened with an X rating (a classification reserved for movies with explicit sexual or violent content) when it was first released in 1969 and an NC-17 rating when it was re-released in 1994. Unlike most westerns of the era, The Wild Bunch was an uncompromising look at outlaws living in the American West and it featured rough, irredeemable outlaws and scenes of graphic violence. It may seem tame by today’s standards, but the exploding squibs, bloody gunshot wounds and 130+ body count still make it one of the most violent westerns ever made. 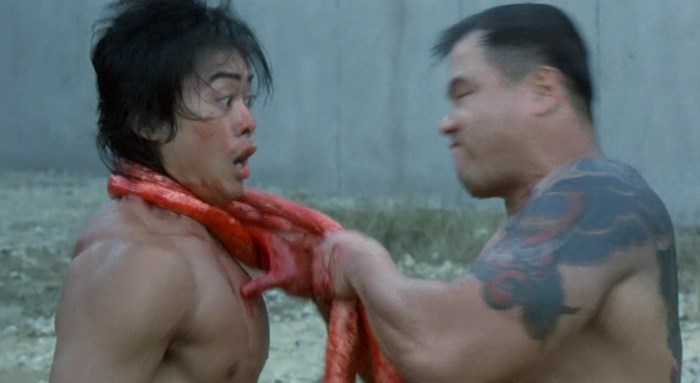 The most violent movies sometimes know that less is more, and a well-timed cut or pull away in a graphic scene can have a much greater impact on the audience. This is not the case with cheesy cult classic Riki-Oh. A movie which constantly teeters on the edge of ‘so bad it’s good’, the titular ‘Ricky’ is a man with superhero levels of strength who is thrown into prison after killing a crime boss. The ridiculous levels of ultra-violence don’t even attempt to be the slightest bit realistic and some of the movie’s gory highlights include a man disembowelling himself so he can use his own intestines as a weapon, eyes being popped out of heads and various other scenes of body parts exploding after being punched. 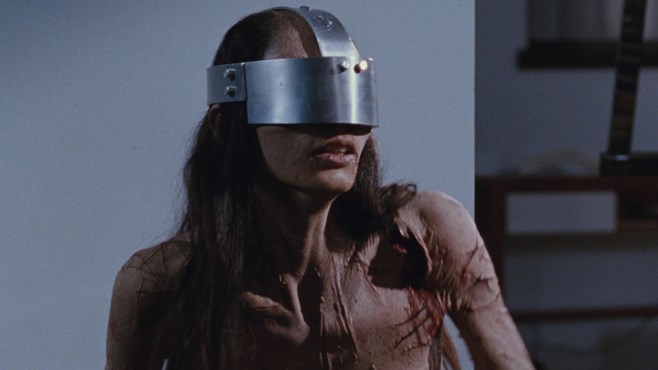 Although most horror fans instinctively think that the most violent and gory offerings from the genre hail from Asia, French filmmakers have been producing some of the most violent movies in recent years. French nasties like Haute Tension, Inside and Frontier(s) are essential viewing for any gore hound, but Pascal Laugier’s Martyrs is one seriously bloody and disturbing movie. Martyrs features a mysterious, centuries-old society which is attempting to discover if there is an afterlife by essentially pushing people to the very brink of their physical limits. Its victims (or martyrs) are subjected to sustained periods of violence and torture, sometimes lasting years, in the hopes they reach a form of transcendence. Although its philosophical message may be a little shaky, aftermath scenes of women who have been tortured (one martyr is chained and locked in a basement for years and another is surgically flayed alive) makes Martyrs an undeniably difficult movie to watch. 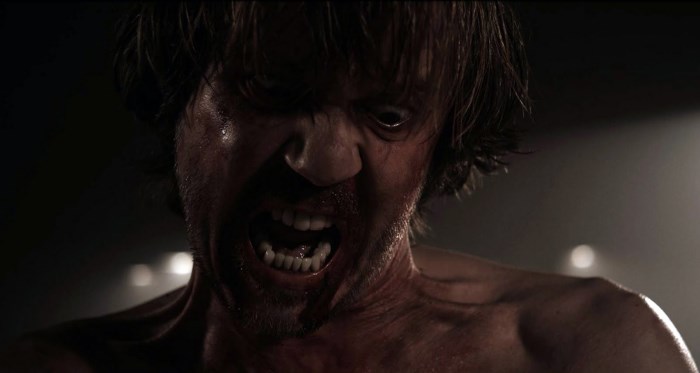 While Human Centipede I and II were stealing mainstream attention as being the sickest movies ever made, one of the actual sickest movies ever made was released. A Serbian Film is an ugly movie set in the seedy underworld of extreme pornography and, although it features fewer acts of violence than other movies on this list, the scenes are much nastier and more graphic. A Serbian Film actually attempts some serious political allegory with its story and characters, but this is undermined somewhat by not one but two deaths by penis. 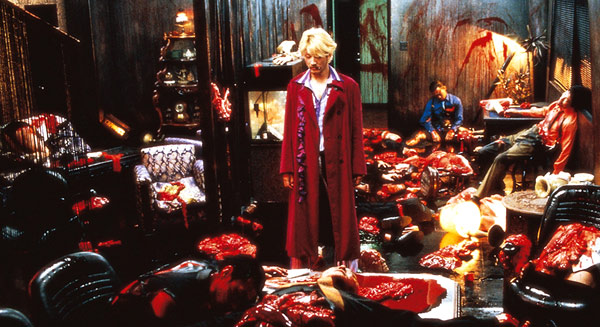 Cult Japanese filmmaker Takashi Miike is well-known for making bizarre and controversial movies, but he really pushed the boundaries of violence with his adaptation of the manga comic Ichi the Killer. The movie features extended and very graphic scenes of torture (a man hung from the ceiling with hooks embedded in his back gets metal skewers pushed through his face and hot oil poured on him), sexual violence (a woman’s nipples are stretched out and cut off) and ridiculous gore (one character has razor sharp ice skates which can cut a person in two). Sick bags were handed out to the audience of its Toronto premiere and the movie is still banned in several countries and was heavily edited upon release in others, but Ichi the Killer is one of the few movies which truly deserved the controversy it received. 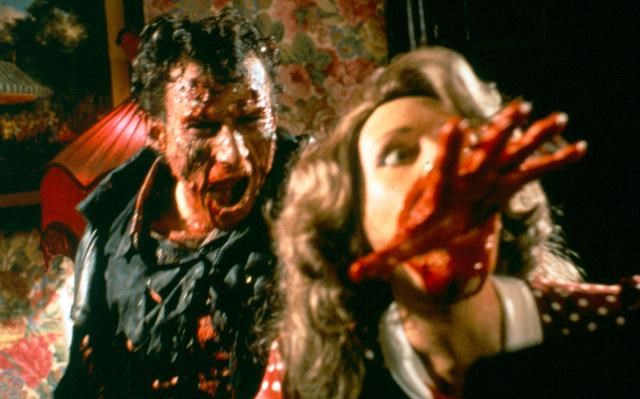 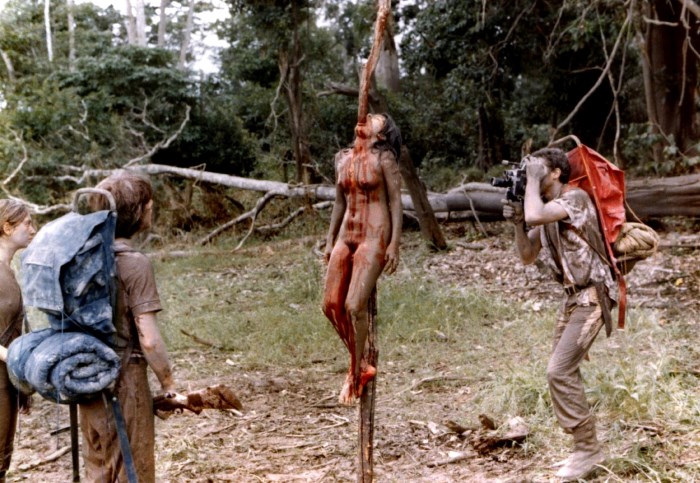 Horror exploitation movies don’t come any more provocative and disgusting than Cannibal Holocaust. A huge influence on the found footage genre and one of the most controversial movies ever made (the director was charged on suspicion of making a snuff film because the gore special effects were so realistic, and the movie also features real scenes of animals being killed), Cannibal Holocaust is a difficult watch even for the most desensitized gorehounds. Fans of the horror genre will instantly recognise the iconic image of a woman who has been impaled on a huge pole with a spike sticking out of her mouth, but the movie also contains countless other scenes of graphic violence including savage beatings, maiming, executions and, of course, cannibalism. To this day the movie is still banned in some countries and it has been heavily edited on DVD in others.