Maybe tourist attractions isn’t the right word for the following ten momunments in North Korea since tourists aren’t welcome in the country, at least if your not Dennis Rodman … However, it would be cool to check out these massive monuments: 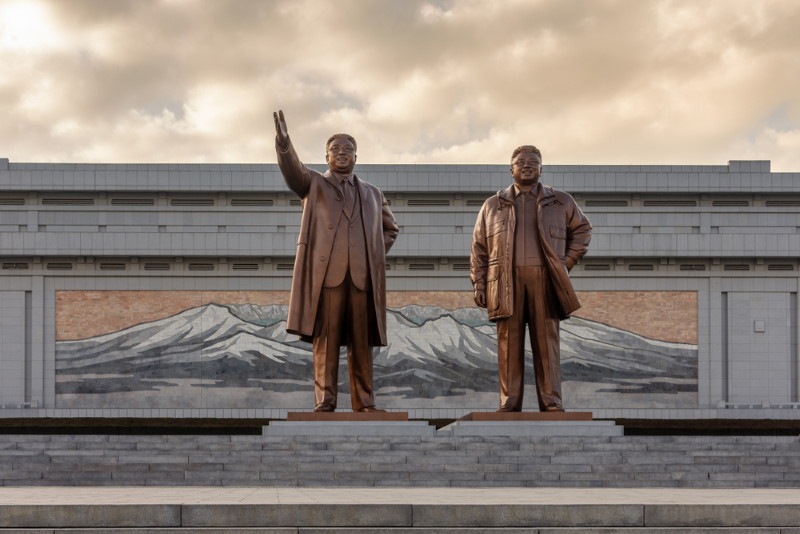 In honour of his 60th birthday, Kim Il-Sung, otherwise known as the ‘Great Leader’, had this huge bronze statue (to the left) erected to commemorate his rule even during his own lifetime. His statue has been looking down over the capital since 1972, and it did so alone until eventually being joined by a similarly impressive statue of the ‘Dear Leader’, Kim Jong Il. In the case of Kim Jong Il, his commemorative statue wasn’t erected until after his death in 2011, being put into position in 2012. You’ll notice that there are many floral tributes placed at the base of the statues. It’s common practice here for people to commemorate their leaders by laying flowers down in this way. 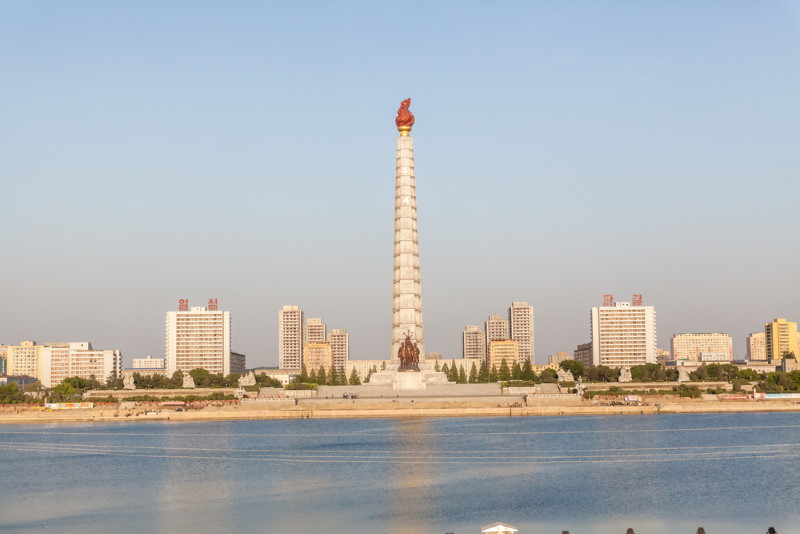 Just opposite Kim Il Sung Square is the impressive Juche Tower which was made to honour Kim Il Sung’s 70th birthday. From the viewing platform located just beneath the torch on the top of the tower, there are impressive views overlooking Pyongyang. The viewing platforms can be accessed via an elevator. An interesting fact about its construction is that it is composed of 25,500 blocks which correspond to the days of Kim Il Sung’s 70 years (up to his 70th birthday). At the tower’s base is a 30 metre high statue of three figures united at the point of their triumphantly upheld arms. Each figure is holding a different implement, one a hammer, one a sickle, and the other holds a writer’s brush. These tools are the emblems that collectively represent the Workers’ Party of Korea.

Kumsusan Palace of the Sun 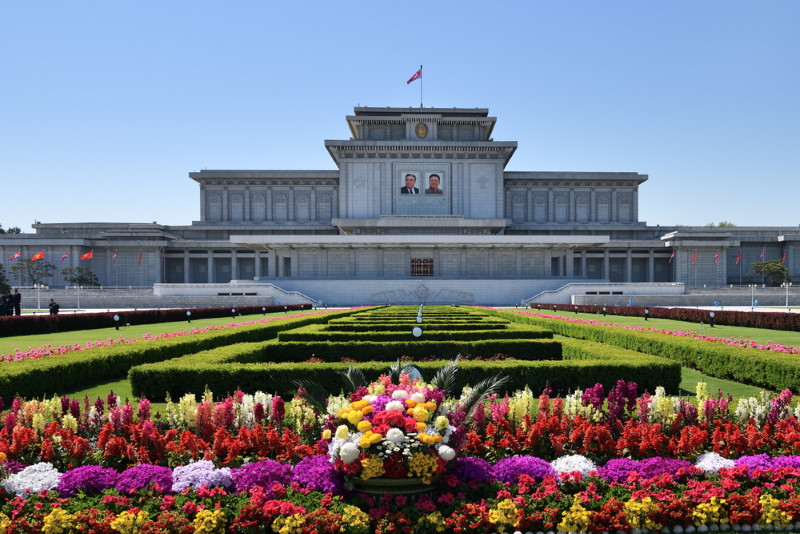 Kumsusan Palace of the Sun, formerly known as the Kumsusan Memorial Palace, was built in 1976 and acted as Kim Il-Sung’s official residence and the Kumsusan Assembly Hall. It now is the mausoleum for him, the founder of North Korea. After his father’s death, Kim Jong-Il had the building altered to suit the purpose of serving as a mausoleum, where Kim Il-Sung’s body lies embalmed inside a transparent sarcophagus. The palace now houses Kim Jong-Il as well who died in 2011. The Palace of the Sun may only be accessed by tourists on Thursday and Sundays, and then only with an official government approved tour. Photography of any kind is not permitted inside. Just in front of the palace is a large square and impressive moat.

Monument to the Foundation of the Workers Party 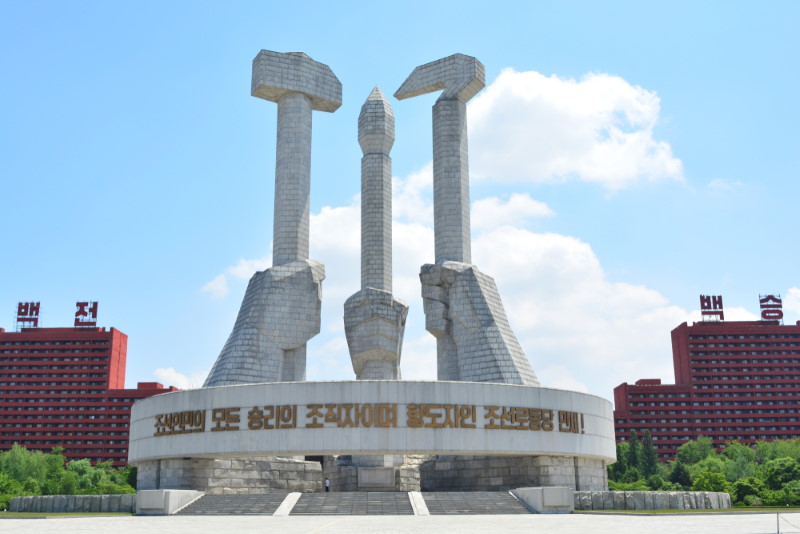 These 50 metre tall towers depicting the emblems of the Worker’s Party of Korea, the hammer, the sickle, and the writing brush, were erected on the 50th anniversary of the formation of Korea’s Workers Party. These symbols are representative of Korean workers and their various roles in the workforce. It’s no coincidence that these monuments are each 50 metres high and is also 50 metres at its diameter, as this number signifies the 50 years of the party’s existence at the time of their being built. Emblazoned around the circular base are the words, “Long live the Workers’ Party of Korea which organises and guides all victories for the Korean people!” The monument can found just across from the Mansudae Grand Monuments. 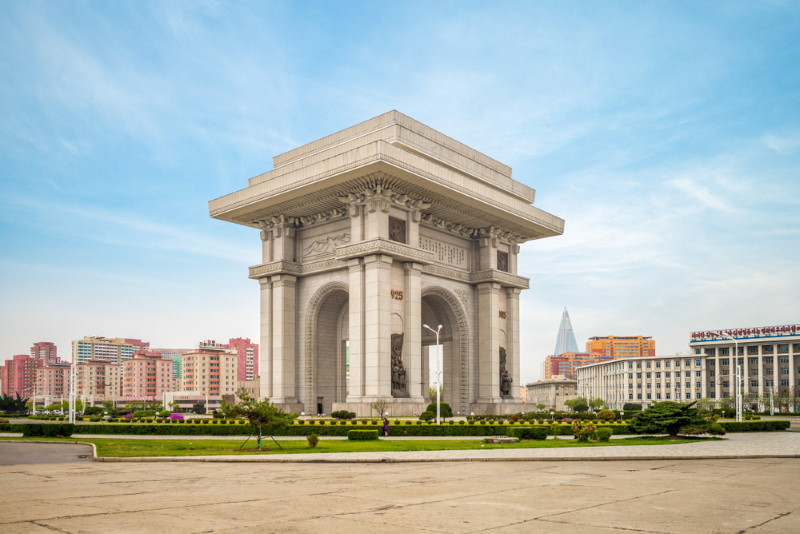 There are many arches commemorating one triumph or another around the world. North Korea’s very own arch distinguishes itself in that it is the world’s tallest standing victory arch standing an impressive 60 metres high and 50 metres wide, that’s 10 metres taller that the Arc de Triomphe in Paris. It opened in 1982 to commemorate Korea’s resistance to Japan between 1925 and 1945. The arch was inaugurated on the 70th birthday of Kim Il-Sung in recognition of his role in the resistance. Significantly, the Arch of Triumph is built of 25,500 blocks, which in a similar manner to the Juche Tower, signifies each day of the leader’s life up to his 70th birthday. Inside there are rooms and observation platforms. 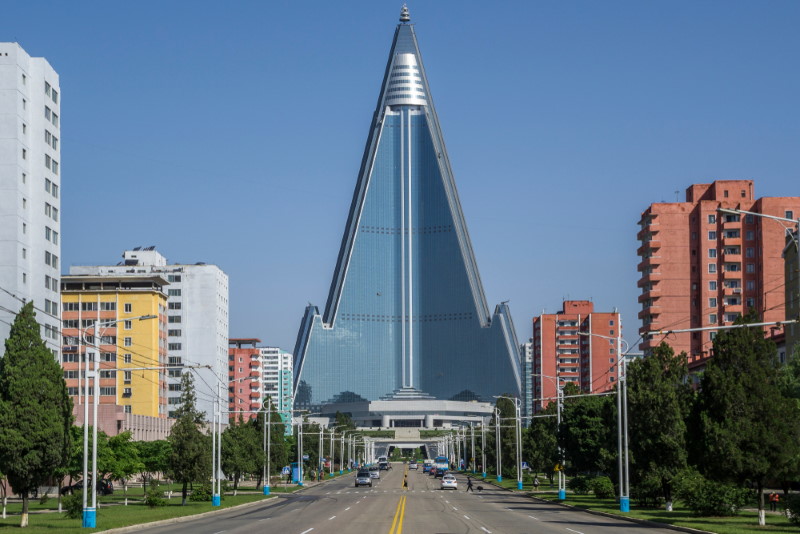 This impressive rocket shaped structure, Ryugyong Hotel, towers into the sky with its 105 floors and unsurprisingly forms a dominant part of the skyline. Sometimes referred to as the 105 Building, it was finally completed in 2012 after various stops and starts throughout its construction history. It comes as no surprise that the hotel is easily the tallest building in North Korea. The structure is topped by a cone 40 metres wide which is said to be able to rotate. 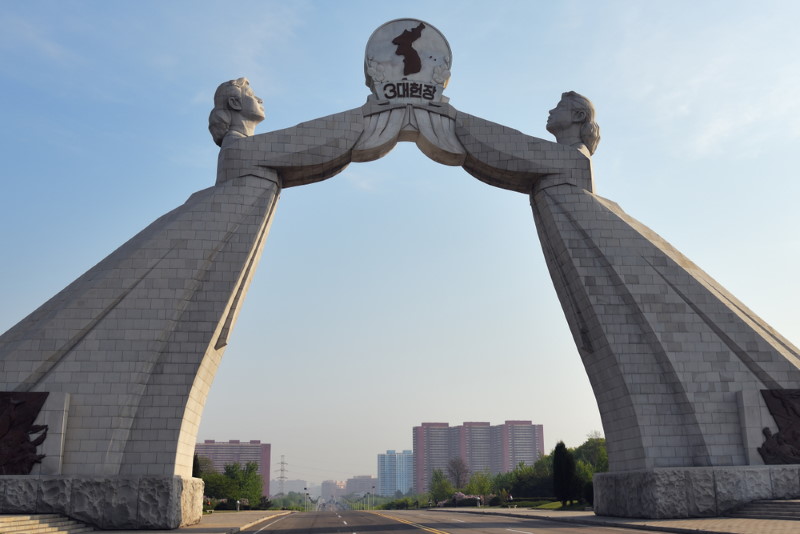 This huge monument overlooking the Tongil Expressway was built in 2001. The two women facing each other are designed to embody the reunification of North and South Korea. Not surprisingly, being a construction of Northern design, it is built to express the wish that a united Korea would be ruled under North Korea’s leader. The Three Charters, which were formalised by Kim Il Sung in 1972, are a reference to the principles of independence, a peaceful reunification, and national unity.

The Rungnado May Day Stadium was completed on May 1, 1989. It has a huge capacity of 150,000, making it one of the largest in the world and is the 12th largest sporting venue on the planet. It has been recognised by the Guiness Book of Records as hosting the largest event in the world, namely the Arirang mass games. It also pays host to football matches and other athletic games. The stadium is also used to pay host to huge performances in honour of Kim Il-sung and in celebration of the nation. During June and July, 2002, the stadium held the aforementioned Arirang games, sometimes referred to as the Mass Games, consisting of masterfully choreographed artistic and gymnastic performances, which involved the participation of a staggering 100,000 plus participants. This has become an annual event, usually being held in August and September. 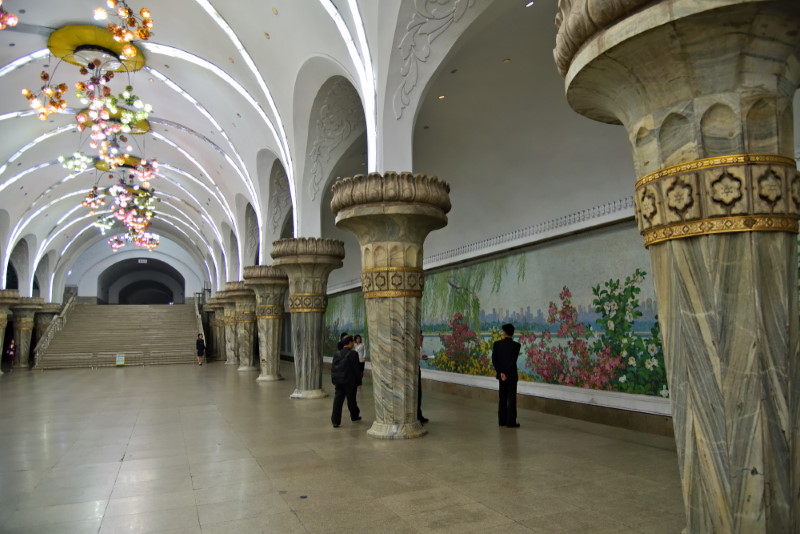 Pyongyang’s metro system opened in 1973 and is reported to have several hundred thousand commuters daily. This subway system is one of the deepest in the world and is beautifully decorated with sparkling chandeliers, marble columns, pictures of the ‘Great Leader’, and depictions of the city and other sights throughout North Korea. 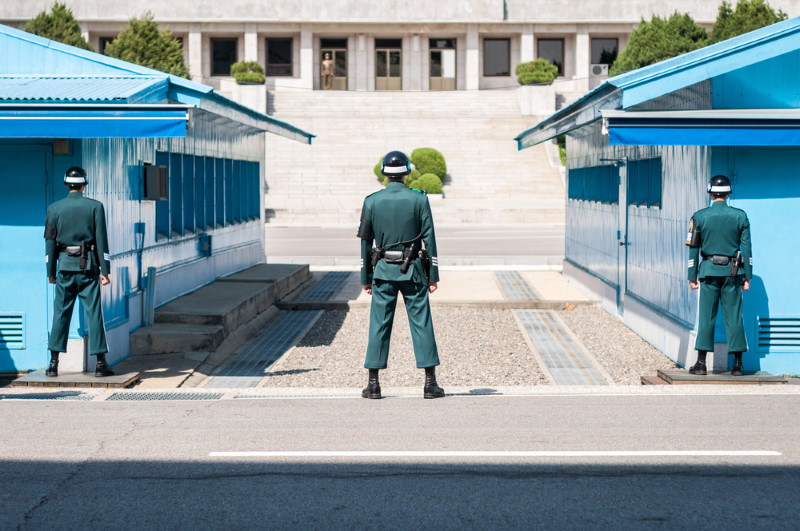 The Demilitarised Zone attracts a large number of visitors from around the world. It manages to do so in spite of being one of the most heavily armed borders in the world. The benign and unspoilt natural surroundings completely belie the nature of this man made political boundary that has been here since after the Korean War, although it must be said that it is a rare event for hostilities to take place. It’s good to see that this onetime battleground has reverted back to its default setting of a place of natural beauty, and it’s no exaggeration to say that it is one of the most unspoilt areas in all Asia. The Demilitarised Zone serves as a natural habitat even for endangered species such as white-naped and red-crowned cranes. Lynxes and black bears are also to be found here as are a many species of fish, not to mention wetlands and forests.

Top 10 Most Spectacular Roads in the World

Top 10 Most Romantic Honeymoon Destinations in the World