Even people who have never picked up a comic book in their lives will know who Stan Lee is. As the creative force behind so many iconic characters and the best self-promoter in the industry, ‘Stan the Man’ has been the face of Marvel comic books for more than half a century. In more recent years he’s been lending his familiar face for cameos in Marvel movies and, although he hasn’t appeared in all of the company’s cinematic outings, he’s always been there when it’s one of his characters making their way to the big screen. 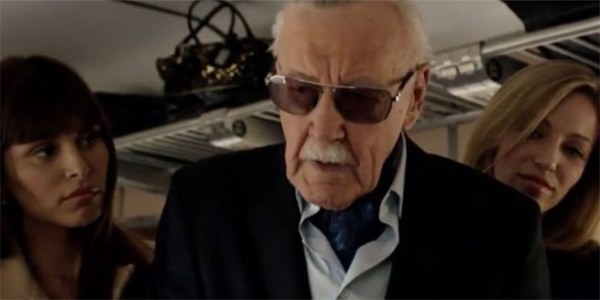 Many fans may have noticed Stan’s absence in franchises like Ghost Rider, Blade and the Punisher. He has commented that he doesn’t always appear in films for characters that he had no part in creating (although the likely reason he didn’t appear in the Blade or Punisher movies was because they were R-rated) but Stan always finds time when it comes to the Marvel Cinematic Universe. Although Stan originally remarked that he wouldn’t be appearing in the Guardians of the Galaxy because he didn’t create the group and wasn’t “even sure who they all are” (he did help create Groot, though), he ended up in the movie as a ‘Xandarian Ladies’ Man’ and was yet again accompanied by a very pretty girl. However, director James Gunn has said that his original idea was to have Stan sat in one of the Collector’s glass cases and flip off Groot as he walked past. Gunn even shot the scene with a stand-in and intended to digitally composite Lee’s face on top but sadly Disney passed on the idea. 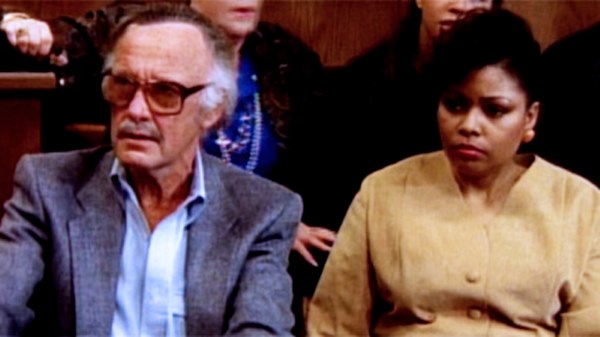 For Lee’s very first onscreen cameo in a Marvel production we need to go all the way to 1989’s the Trial of the Incredible Hulk. The TV movie was a spin-off from the popular Incredible Hulk series, with Bill Bixby and Lou Ferrigno reprising their roles as Dr David Banner and the Hulk. Sadly, fans looking for some crazy Hulk-out action will be disappointed by the hokey effects and it doesn’t even deliver any juicy legal drama as the trial only actually occurs in a dream sequence. Stan plays a juror who wisely dashes out of the courtroom when an agitated Banner transforms into the Hulk and trashes the place. The movie is a far cry from Lee’s parts in big screen blockbusters, but it’s interesting to see how his onscreen cameos first started out.

X-Men was Stan’s first proper cameo on the big screen but, looking back, it’s surprising how low-key it is. Stan can be briefly spotted as a hot dog vendor on the beach when the infected Senator Kelly stumbles out of the water. Unlike later appearances, Stan isn’t the focus of attention as the camera pans past him to focus on a television set. Although the X-Men franchise now has a pretty staggering 7 movies, Lee only appears in 2 entries: X-Men and X-Men: The Last Stand. He’s stated that filming locations or a busy schedule has prevented him from filming a quick scene in the past, but it’s pretty clear that he doesn’t show his mutants as much love as those characters in the Marvel Cinematic Universe. He joked on Twitter that his lack of a cameo in the most recent entry, X-Men: Days of Future Past, was a marketing ploy to sell more tickets as fans will go back and see it twice to try and find him. 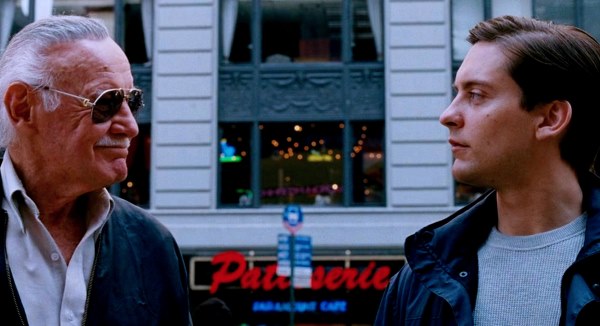 Spider-Man is perhaps Stan Lee’s most popular creation (well, co-creation) so it was a little disappointing to see him show up in Sam Raimi’s first two Spidey entries as just another extra trying to avoid falling debris. Thankfully by the third movie the Stan Lee cameo had been firmly established by other Marvel movies and he was finally given a little more screen time alongside his favourite creation. As Peter Parker is staring at a sign announcing that Spider-Man will be receiving the key to the city, Stan stands by him and says “You know, I guess one person can make a difference. Nuff said!”. It may be a little on the nose, but it’s a nice moment to see Spidey being given some words of encouragement from Stan himself. 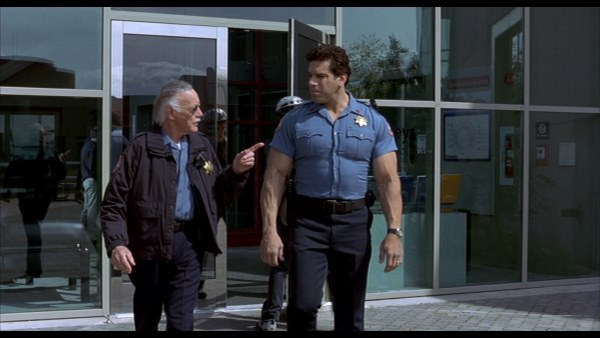 Ang Lee’s take on the Hulk may be one of the more contentious Marvel movies but the less-than-conventional adaptation provided a great cameo moment for comic book fans. In his first onscreen Marvel speaking role, Stan can be seen strolling out of Bruce Banner’s lab talking to another security guard, played by Lou Ferrigno. It’s a nice nod to the Hulk’s legacy, even if the rest of the movie isn’t quite up to scratch. 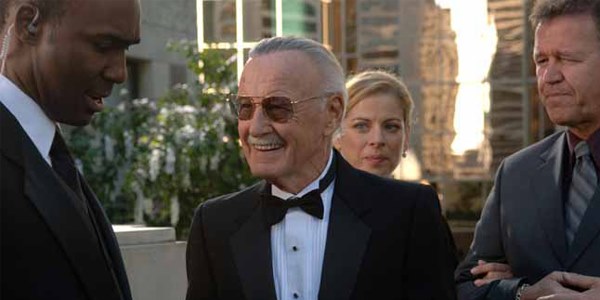 The Fantastic 4 movie was a definite low-point for Marvel adaptations and even the promise of the Silver Surfer didn’t elevate the sequel past the point of mediocrity. However, the filmmakers at least put some effort into Stan’s cameos. In the first movie, Stan has a speaking part as Willie Lumpkin; a bit character from the comics who serves as the mailman to the Baxter Building. For the sequel, the writers again took inspiration from the comic books and featured a scene where Stan is turned away from the wedding of Reed Richards and Sue Storm. It’s a neat callback to the wedding issue in the comics where Stan and Jack Kirby find themselves in a similar predicament and are again turned away from the ceremony of the superheroes they created. 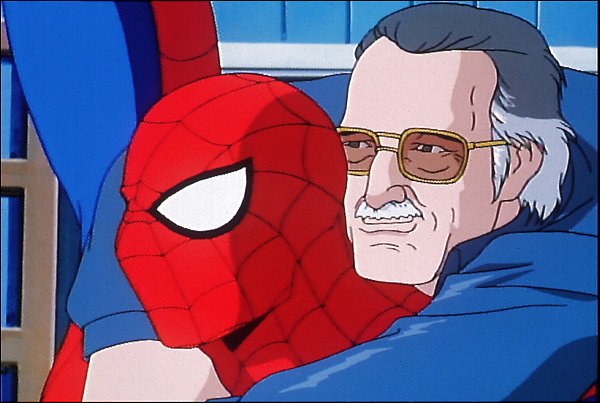 Fox’s Spider-Man cartoon series from the 90s ended with Spidey hopping through dimensions in an effort to defeat Spider-Carnage. Aided by other Spider-Men and the mystic Madame Webb, Spider-Man defeats the symbiote and is transported to “our” reality. He meets Stan Lee and lets his creator experience some web-slinging before returning to his own reality in search of Mary Jane. The meta ending was a good tribute to the weirdness that comic book fans are used to, but it gets even better knowing that Madame Web is voiced by Stan’s actual wife Joan Lee. The two exchange some niceties with Stan calling Web an “exotic lady” and Joan referring to him as a “truly special” man. 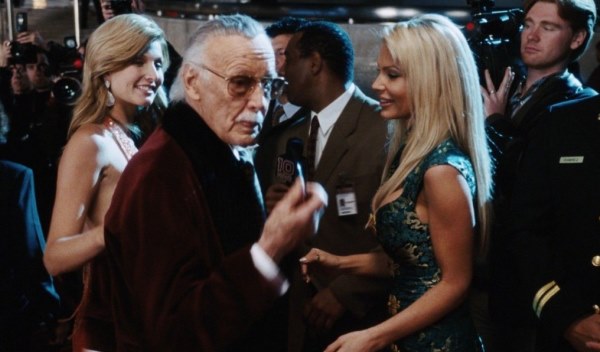 For his first outing as part of the new Marvel Cinematic Universe, Stan was game to pretend to be another octogenarian millionaire – Hugh Hefner. As Tony Stark enters a gala at the beginning of the movie, he pats Stan – who is seen with a smoking jacket, pipe and a bevy of beautiful blondes – on the back and says “You look great Hef” (a longer version of the scene ruined the joke as Tony realises his mistake and Stan replies “That’s okay, I get this all the time.” but thankfully it was cut). The sequel had more fun with Stan as he briefly appeared wearing a red shirt and suspenders and is mistaken by Tony for American talkshow host Larry King. 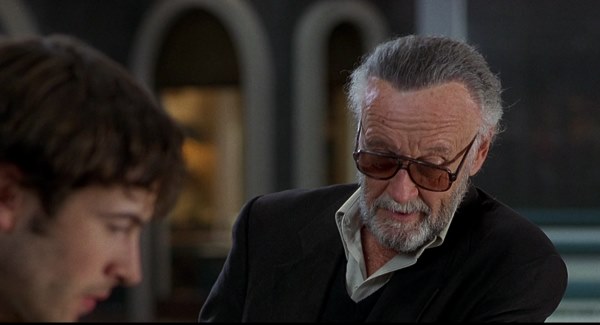 Stan has frequently ventured outside of his Marvel comfort zone to appear on the big screen. Clearly enjoying some of the clout he gained from his breakout indie hit Clerks, comic book fan Kevin Smith managed to wrangle his hero for a brief cameo in his follow-up comedy Mallrats. Jason Lee’s comic book-obsessed character Brodie is feeling dejected and confused about his relationship woes when Stan Lee appears to give him some sage dating advice about heartbreak and regret while dodging questions about “super hero sex organs”. It’s unusual to see Stan actually have more than a few lines of dialogue but he pulls it off very well considering it was years before the Marvel movies called for his acting talents. 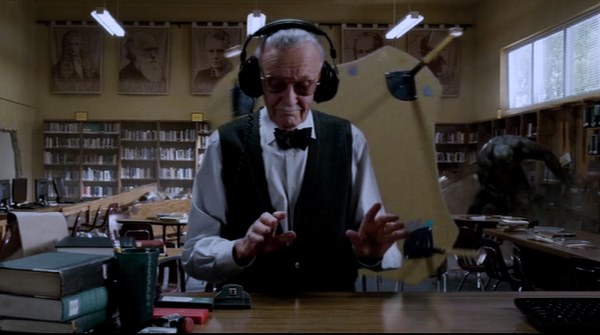 The Amazing Spider-Man definitely had its problems, but even its biggest detractors have to concede that one of the highlights of the movie was Stan Lee’s inspired cameo. Stan finally got stuck into a big superhero/supervillain fight scene in a Marvel movie, even if his character didn’t quite realise it at the time. The Lizard and Spider-Man end up in the library as they duke it out and slam through walls in the high school. Thanks to some classical music piping in through his headphones, librarian Stan is blissfully unaware of the carnage unfolding as the superpowered duo exchange blows and completely destroy the library behind him. Even though he doesn’t have any dialogue the ten second action sequence is definitely the most memorable Stan Lee cameo so far.