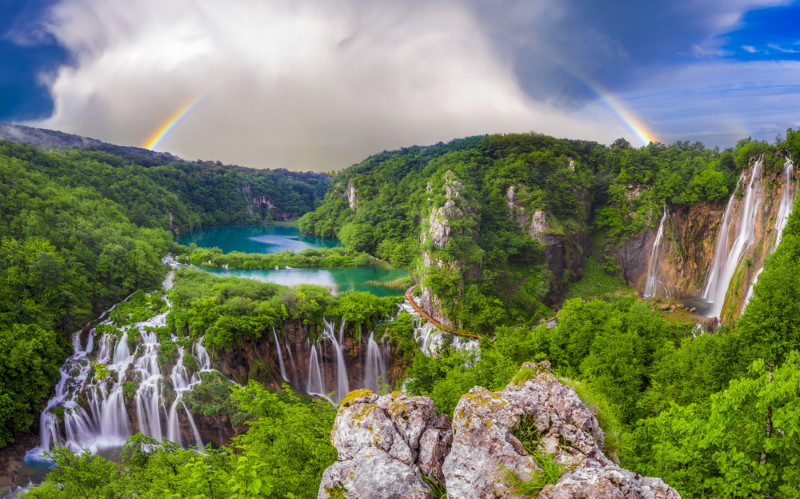 One of UNESCO’s World Heritage sites, Plitvice National Park is largest and oldest national park in Croatia. It is not hard to see why the area has long been admired and preserved for future generations: the whole area is bursting with ethereal waterfalls and shallow lakes, set against well-established forests full of mature and elegant trees. An extra facet of beauty is added by the colours of water which changes from pale bright green to turquoise to soft blue depending on the level of minerals and elements in the water at the time. These minerals are leeched into the water from the soft earth nearby which is a mixture of very soft tufa and slightly harder, but still porous, travertine. It is this soft rock that has allowed the water of the sixteen lakes to shape the multitude of small and exquisite waterfalls, cascades and pools that form the basis of the national park. 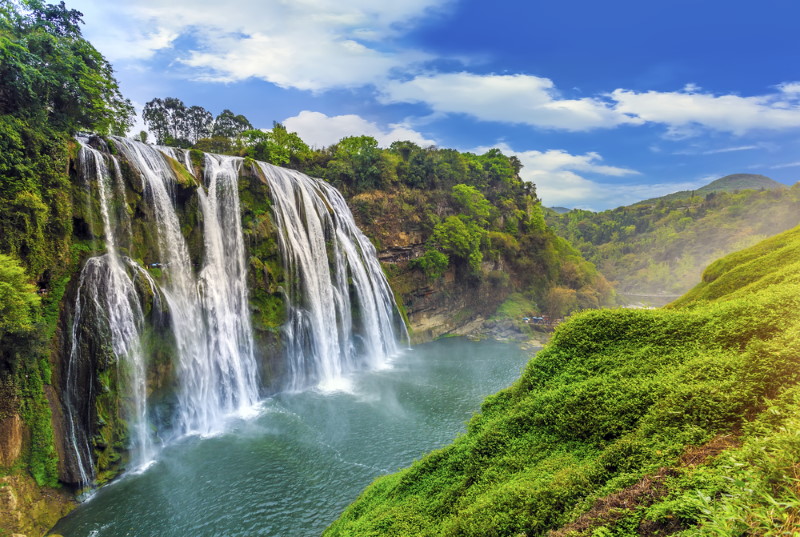 The name Huangguoshu Waterfall translates to ‘Yellow-Fruit Tree Waterfall’ and refers to a local plant, thought to be a species of citrus fruit similar to oranges. The waterfall is one of eighteen in the area, and is the largest waterfall in Asia, standing 74 metres high and spreading 84 metres wide. The Huangguoshu Fall looks remarkably different from the various viewpoints nearby, and there is even a large cave hidden behind the waterfall. This cave is known as the Water-Curtain Cave and tourists can visit the cave and admire the view of the water rushing past as they stand in relative dryness! Huangguoshu is just one of eighteen waterfalls in the area and the authorities can adjust the flow of the water by controlling an upstream water reservoir. 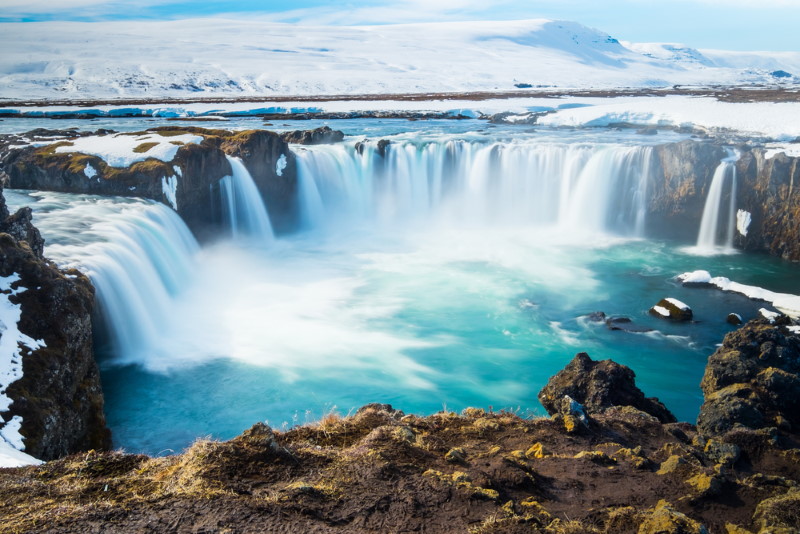 Gullfoss means Golden Falls in Icelandic, and this is because much of the water flowing over the falls is glacial water, full of the sediments and earthly detritus picked up as the glacier carves its way along the ground. As this debris-laden water tumbles over the edge, the particles catch the light, making the rather dull and brownish water appear a shining gold colour. Originally in private hands, the waterfall was thought of as a potential source of hydro-electric energy, but plans to set up a power station came to nothing when the investors ran out of money. The waterfall then passed into the hands of the government who also considered using the power of the water to generate electricity. This plan also did not come to fruition and the waterfall was instead preserved as a natural wonder. Thousands of visitors come to admire the waterfall every year, enjoying the way the river turns and falls down two large ‘steps’ before plunging out of sight. 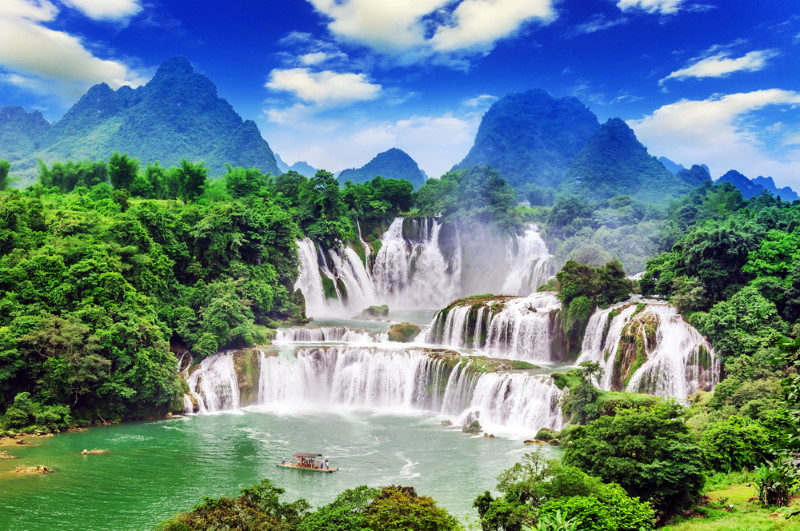 Ban Gioc and Detian Waterfalls are two close waterfalls on the Chinese-Vietnamese border. The waterfalls are so close, that they are often named as one waterfall, dropping the Detian from the name. In fact, in very wet summer the two waterfalls merge and flow as one immense cascade. The falls are the fourth largest along an international border and stretch an impressive 200 metres wide and drop over 70 metres down. Political considerations and border disputes made the area a rather fraught place until agreement was reached in 1999, and now visitors can come to enjoy the spectacle from either country, admiring the large cloud of spray thrown up by the water and the seasonally-changing vegetation. 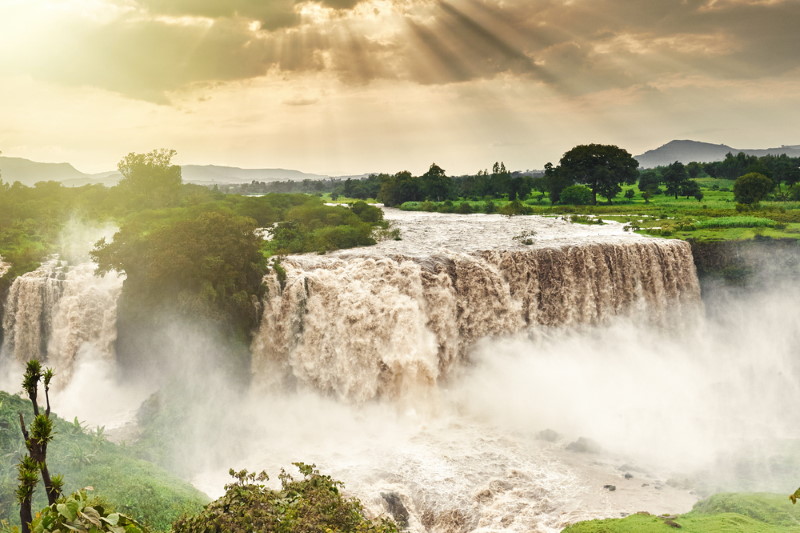 Ethiopia’s magnificent landscape forms a superb backdrop to the historic Blue Nile. While the falls used to change dramatically during the year, drying to the merest trickle in the dry season and swelling to bursting point during the rains, the flow of the water is more controlled and measured now, thanks to the regulation of Lake Tana (which lies upstream of the falls) and a hydro-electric plant that harnesses and controls the might of all that water. Because of the abundance of water and the size of the river, there is a great deal of endemic plant life in the area, adding to the attraction of the spot, which is considered to be one of Ethiopia’s best tourist attractions. 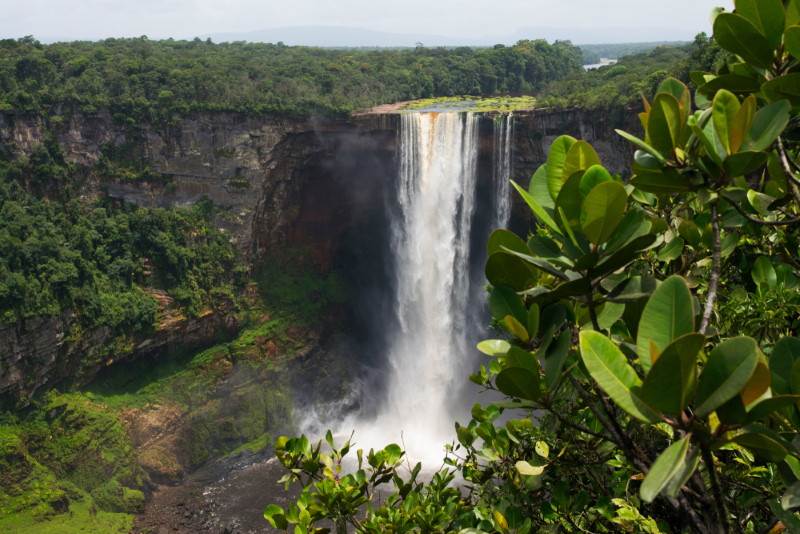 The tiny country of Guyana, squeezed atop Brazil and squashed by the neighbouring countries of Suriname and Venezuela, is home to the beautiful Kaieteur Waterfall. From the air it appears as though a giant has taken an enormous spoonful out of the flat spreading greenery of the jungle, leaving an immense depression, to which the river runs, almost dead straight, before plunging into the mysterious depths. The fall is one of the country’s best tourist attractions and there is a frequent shuttle service between the falls and two other airports. The waterfalls is immensely tall, dropping straight for some 226 metres (which is taller than both our number one and number two falls!) and then down again in a series of steep cascades. 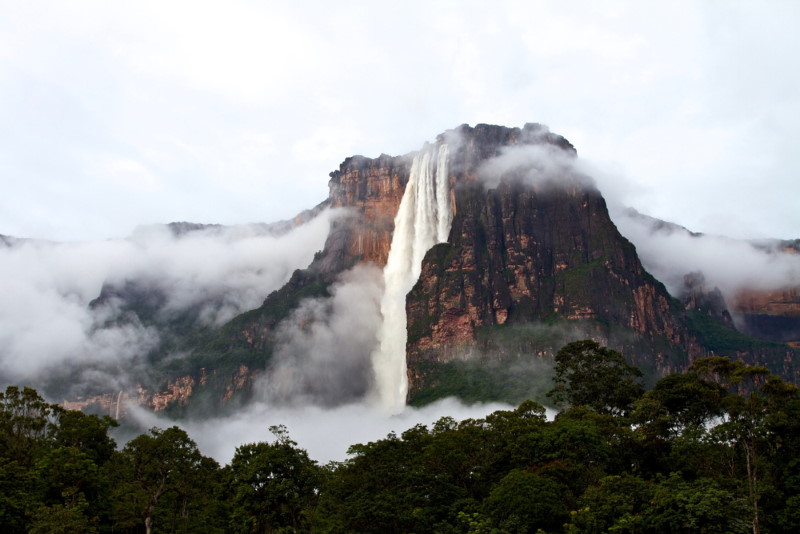 The tallest waterfall in the world is Angel Falls in Venezuela, looming some 979 meters above the earth. To put that into a bit of perspective, if you were to fall from the top of the falls, it would take you a lengthy ten seconds before you hit the ground (which would be somewhat messy and should be avoided at all costs!). Needless to say, the falls are a popular tourist attraction, but getting there and back is definitely part of the experience, rather than a simple transit! The falls are deep in an isolated area and it is necessary to fly as close as possible, before travelling along the river to reach the falls – not something that can be completed in a few hours before cocktails in the hotel bar! Disney fans will recognise the falls as being the basis for Paradise Falls in the animated movie Up. 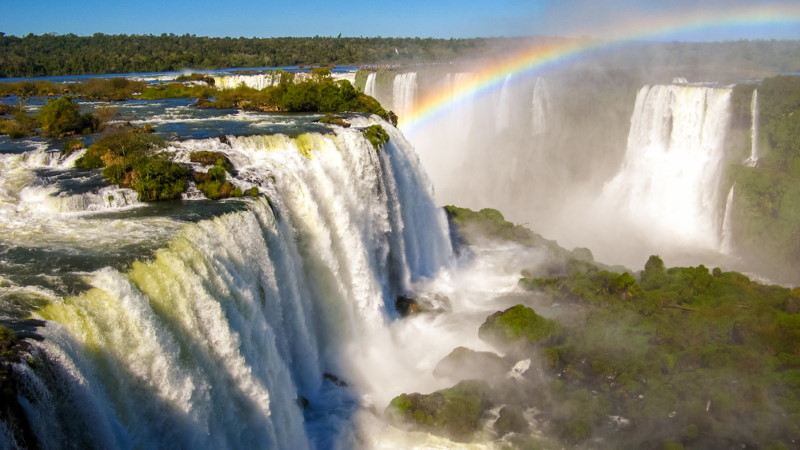 Poised between Argentina, Paraguay and Brazil, the Iguacu Falls are a dramatic sight, clearly portraying the eroding action of the water on the softer ground beneath. The falls are, rare in South American waterfalls and natural features, relatively easy to reach, and because of this and the unique look of the fall, Iguacu Falls has featured on many movies, television shows and even advertisements. The most famous point of Iguacu Falls is the spot where a person can stand and be surrounded by 260° of waterfall, a truly amazing and awe-inspiring sight. Iguacu Falls is the third largest waterfall to stand on an international border. 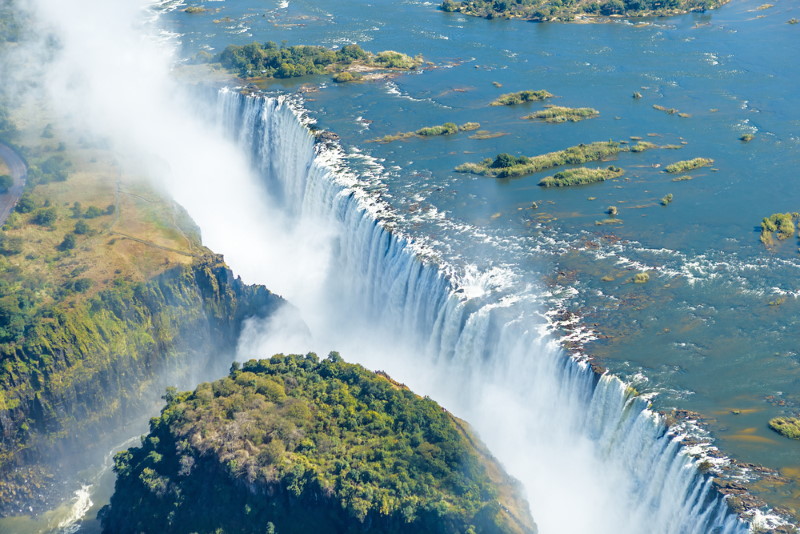 Known locally as Mosi-au-Tunya or The Smoke That Thunders, Victoria Falls is neither the widest waterfall in the world, nor the tallest – but it is widely acknowledged to be the largest, based on its width of 1708 meters and a stated height of 108 meters and the formation that sees the world’s largest curtain or unbroken sheet of falling water. The waterfall is very old, and has had centuries to carve its way along the river bed and geology students often delight in seeing the very real effects of erosion and weathering that Victoria Falls provides! Some of the older gorges show that Victoria Falls is not currently at its largest ever size, having been much wider in the past. Victoria Falls is an enormously popular tourist attraction, with neighbouring Zambia also cashing in on the trade. Victoria Falls is the second largest waterfall on an international border. 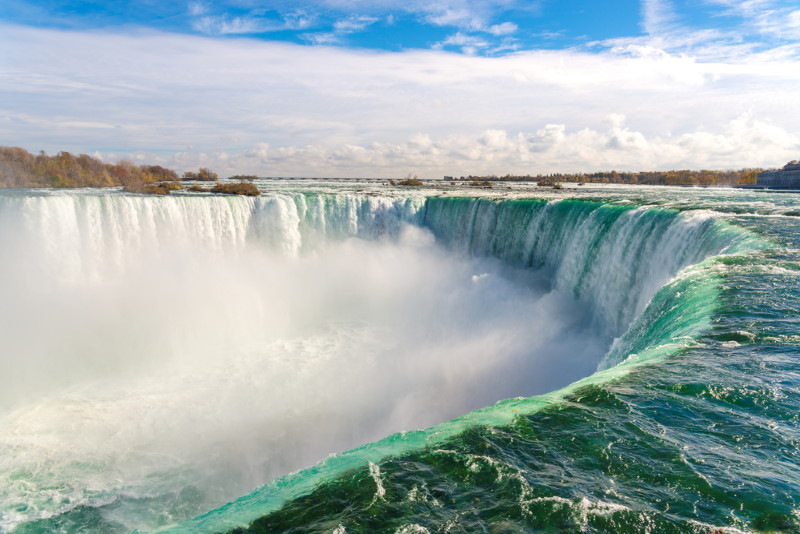 Acknowledged as one of the biggest attractions in both America and Canada, Niagara Falls is actually three falls in one. The three falls are named, Bridal Veil Falls, American Falls and Horseshoe Falls, from smallest to largest. More water flows over Niagara than over any other waterfall in the world, and it has long attracted dare-devils and risk-seekers of all kinds. People have leapt into the falls (the earliest known survivor being Sam patch who made the leap in 1829) and crossed above the water on a tight-rope, with many deaths being recorded along the way (some intentional, many more not so). Today, safety regulations keep the public safe and sound, while offering a series of tours, walks and even boat rides to admire the falls from as many angles as possible, making it, perhaps, the most photographed and recorded waterfall in the world!