Rhythm games are arguably one of the strangest video game genres to explode in popularity in recent years. For many gamers, the idea of following along with a pattern or sequence doesn’t sound like the most appealing way to play a game and it’s easy to think that there’s no real difficulty in copying what’s on screen. However, while it may be easy to learn the basics of a rhythm game, they are always very, very hard to master. Rhythm games require split second reflexes and perfect timing and some offer the most challenging gaming experiences on any console or arcade system. The genre is also hugely inventive and creative, and it’s always strived to find new ways to entertain and challenge players in equal measure. 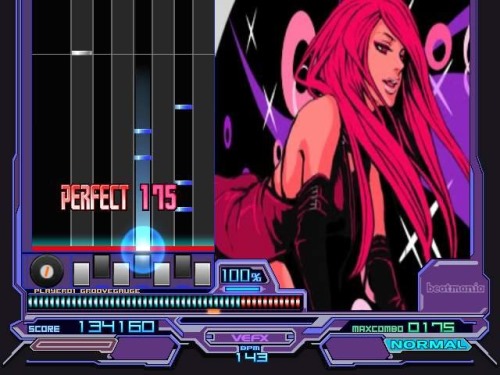 Although home consoles would eventually follow suit and release an increasingly varied range of peripherals, early arcade rhythm games were able to take advantage of the growing genre. Modelled after a club DJ booth, Beatmania was an intimidating sight for first time players. Players had to play along to the beat on screen by tapping five corresponding vertical keys on the arcade’s dashboard, but they also had to ‘scratch’ a fake record turntable which was to the left of the keys. Beatmania was no joke, especially when the more advanced Beatmania IIDX series came along which had 7 keys and even featured mixer effector controls (which thankfully didn’t affect gameplay and was just used to manipulate the in-game music). Dance music is understandably much more difficult to follow a rhythm to, and watching an experienced Beatmania expert play along to some of the more difficult songs is truly awe-inspiring. 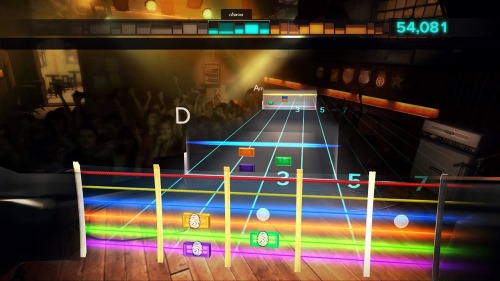 When rhythm games became increasingly popular in the home console market, many wondered if they could help gamers pick up actual instruments and start learning them. However, the skills learned from most of these games can only really go so far and it just wasn’t the same as learning to play a real instrument. Rocksmith sought to change all that by allowing players to plug in a real guitar with actual strings and not brightly coloured buttons to play along with the game. Although it’s yet to be seen if the game produced any rock stars in the making, there’s no denying that it was a very useful learning tool for budding musicians. 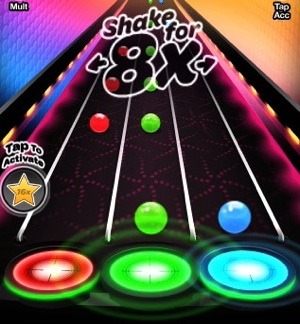 Despite their smaller screens, smartphone and tablet devices seemed like the perfect fit for the rhythm game genre. The Tap Tap Revenge series was a breakout hit for iOS devices and even became one of the best-selling video game franchises ever. The objective of the game is simple; players use their phone or tablet’s touchscreen interface to tap along to the falling beats on the screen. The game also made use of accelerometer technology so players have to shake their device in a certain direction when the command comes up on screen. Tap Tap offered a new take on the genre, and the short levels of rhythm games made it the perfect way to enjoy quick bursts of mobile gaming. 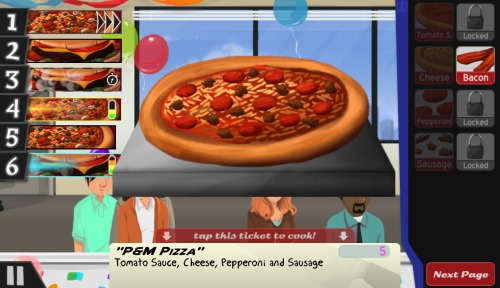 No one ever said that a rhythm game has to be focused around music or dancing. Cook, Serve, Delicious offers a fresh take on the genre by putting players in charge of a kitchen. By either tapping buttons back and forth or following a sequence, players can chop, dice, stir and mix dishes as well as add ingredients, seasoning and toppings. Customers can ask for a wide variety of dishes (each with multiple variations) and players must memorise different button combinations and patterns to prepare and serve the food. There’s also a time-management side to the game, and it’s important to serve the right food at the right time to get the best reviews (and tips) from customers. With RPG-style upgrades and plenty of things to unlock, Cook, Serve, Delicious is a surprisingly in depth rhythm/cooking simulation game. 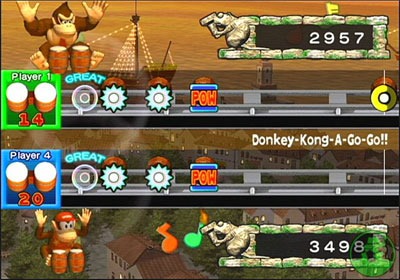 The Donkey Konga bongo accessory was one of the weirdest video games peripherals ever released. Essentially a pair of small bongos with a built-in microphone, players had to bang and clap along to a weird, eclectic mix of songs as well as to some of Nintendo’s most popular themes. Although it sounds the same as basically drumming and tapping your hands along to the radio, Donkey Konga was surprisingly addictive and challenging. Although there’s only three different onscreen prompts to follow, it was easier to get flustered by the simplicity of the game. 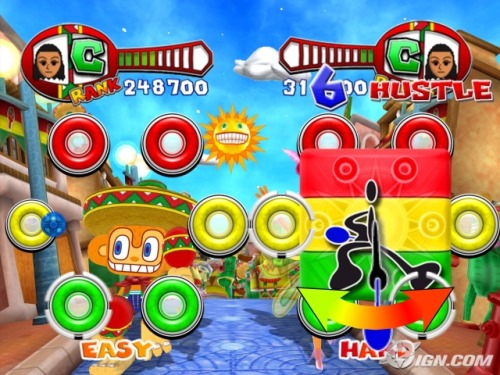 Samba De Amigo had the second weirdest video game peripheral ever released. A rhythm game based around Latin music, Samba de Amigo came with two maraca shaped controllers. Based on an arcade game, the home console version was surprisingly technical to set up as players had to place their feet in position on a special brown mat in front of a sensor bar which triangulated their position. Although these controllers were expensive (and they could only be used in one other Dreamcast game), Samba de Amigo was a rhythm game treat. There is more to the game than meets the eye as players have to shake the maracas at three different heights (high, middle, low) as well as strike poses when required. Featuring quirky, bright graphics and requiring almost epic levels of endurance and stamina, playing the maracas was never more fun. 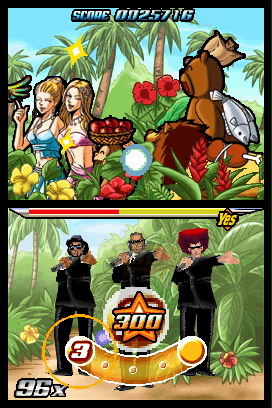 Elite Beat Agents is a truly maddening game. Using the Nintendo DS stylus, players have to rely on gestures and swipes rather than ‘simple’ button pressing. However, unlike most rhythm games, the beats and prompts don’t appear on screen one at a time. Instead, the game’s interface uses numbered markers which have to be hit or swiped in sequence. While this sounds easy enough, some of the harder levels of Elite Beat Agents literally fill the entire screen with numbers so players have to manically swipe and tap at the screen to keep up. It was no easy feat, and the Jumpin’ Jack Flash level broke the will of many seasoned gamers. 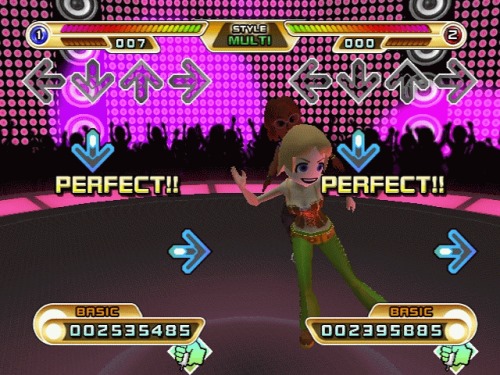 Anyone who has ever walked through an arcade and heard the manic, rhythmic stomping of feet knows just how addictive Dance Dance Revolution can be. Standing on a ‘dance platform’, players dance along with the directions on screen by moving their feet to match up with the right controls. Although the result is less like dancing and more like a version of Riverdance turned all the way up to 11, Dance Dance is a hugely entertaining game which requires quick feet and incredible stamina. Each arcade machine is decked out with flashing lights and huge speakers so it feels like you’re in a completely different world as you dance along manically to the game’s cheesy, unique tracks. The series eventually made its way to home consoles with plastic dance mat peripherals, but nothing beats the chunky retro charm of the original arcade machines. 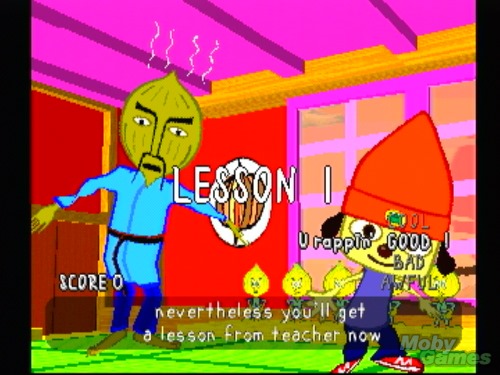 PaRappa the Rapper is one of the strangest video games ever made. Taking control of the titular cartoon dog, players essentially follow PaRappa as he goes about his life and tries to woo the girl of his dreams. PaRappa gets involved with rap battles/singalongs and players have to successfully match up the patterns on screen to get the best ranking. The game plays out like a weird children’s book/cartoon and it admittedly lacks the features and difficulty of other popular rhythm games. However, the colourful graphics and bizarre story is just part of PaRappa’s endearing charm and its unique soundtrack has become a cult hit since its release. The success of the game paved the way for the modern rebirth of the genre, but very few rhythm games since have managed to recreate the sheer joy and energy on display in PaRappa the Rapper. 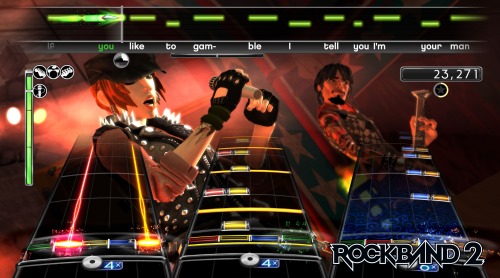 Rock Band was one of the few rhythm games which tried to ‘legitimise’ the genre. Harmonix clearly put huge amount of time and effort (as well as music) into the game’s catalogue, and the developer licensed music from some of the most iconic and leading artists in music as well as supporting new bands on the rise. Rock Band was also constantly expanding its catalogue and players could download new tracks as DLC rather than wait for the next sequel. However, Rock Band’s real success came from its emphasis on multiplayer. The series was all about being able to play together with friends as a band, and there was nothing more satisfying than mastering a song with others playing along on drums, guitar, bass and microphone (and later keyboard). Of course, there was nothing more frustrating than having that one player who just couldn’t keep up with the music, but that was all part of the fun too.