When many of us think of old structures our minds instinctively turn to impressive-looking monuments which have become testaments to the wonders of architecture and building. However, when we include the likes of cairns, temples and burial grounds, we can look back thousands of years – and not just centuries – to find some much older man made sites which are still standing to this day. 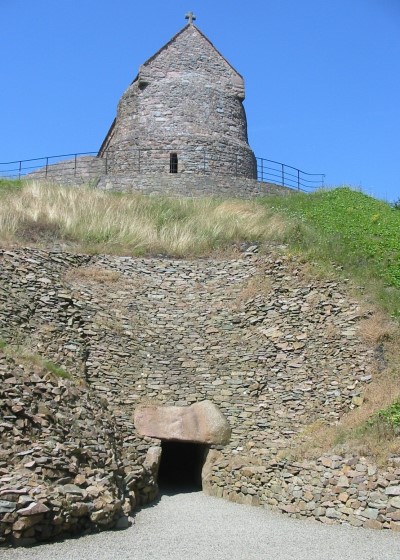 Situated in the Jersey parish of Grouville is La Hougue Bie. ‘Hougue’ comes from the Norse word for ‘mound’ whilst the origins for ‘Bie’ remain unknown, despite some speculation on its origins. The site is thought to have been a place for Neolithic ritual from around 3500 BC. It has an 18.2m passage, covered by a 12.2m high earth mound. Excavated in 1925, it is one of the world’s best preserved passage graves and it is thought that the site functioned more as a church or cathedral, with its burials seemingly incidental. La Hougue Bie has been adapted throughout history; two medieval chapels were erected upon the site in the 12th and 16th Century, whilst during World War II it functioned as a key lookout point, complete with an underground bunker. Its final, and perhaps least impressive feat, is being featured on the 2010 Jersey one pound note. 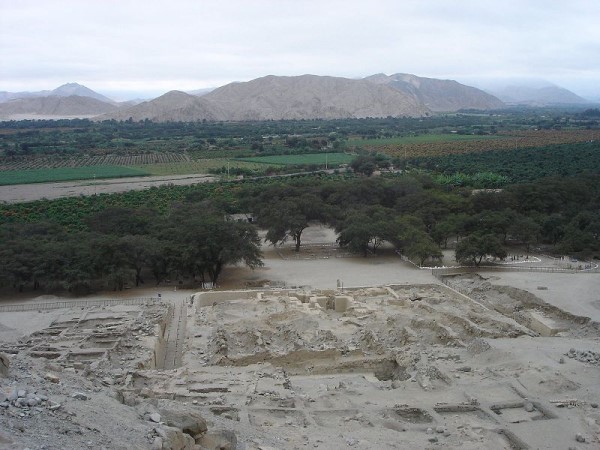 Sechin Bajo is an ancient stone plaza located approximately 300 km northwest of Lima, Peru. First excavated in 2008, initial analysis dates the site back to 3500 BC, which makes it the oldest site in the New World (and the only one on this list residing outside of Europe). As Peruvian and German archaeologists dug into the ground, they found layers which suggested that the site was reconstructed once every 100 – 300 years by different civilisations. The plaza, measuring 39 ft across, was most likely to have been used as a place for gatherings or possibly as a ceremonial centre. Although there is a great deal left to be excavated, scientists do agree that whoever built Sechin Bajo had an astounding amount of knowledge regarding construction and architecture.

County Sligo in Ireland is home to Carrowmore, a large group of prehistoric tombs. In the centre stands Listoghil, a large monument dated as far back as 3550 BC. Standing 59m tall, the mound is surrounded by a cluster of dolmen circles, otherwise known as passage tombs. These chambers are approximately half the size and remain uncovered, whilst the central monument has a covering of stones. Upon its earlier excavation in 1880, many workers were simply removing the stones to be used in construction. It wasn’t until the discovery of the lower tombs in the middle of the mound that this accidental destruction was finally stopped. One hundred years later in the late 1990s, Swedish archaeologist Goran Burenhult began carbon dating bone and other material found within the central chamber. Some bones are believed to be over 6000 years old and thought to have been from cremations performed before the construction of the monument. Upon these findings, the Office of Public Works hastily began reconstruction and preservation of Listoghil to reverse the damage previously caused.

This Neolithic tomb (or barrow) is situated near Silbury Hill in Wiltshire. The construction is believed to have begun in 3600 BC, some 400 years before Stonehenge. Despite some damage to the mound, archeological excavations in both 1859 and 1956 found at least 46 burials, ranging in age from young babies to the elderly. Bones and skulls were missing, leading archaeologists to suggest that they were most likely transported elsewhere, possibly for display. Recent analysis and dating of the bones proposed that all 46 people died within approximately 30 years of each other whilst the tomb remained open and in use for close to 1,000 years. At the end of this period, the passage and chamber were filled with earth and stone, pottery, charcoal, tools, beads and bones. Even after being sealed up, the site remained in use – most likely being used as a site for ritual activity. The finds from the excavation are currently in display at the Wiltshire Museum in Devizes.

Standing on the Mediterranean Island of Gozo is Ġgantija, a megalithic temple complex first erected in 3700 BC. Along with a few other similar structures, they have been designated a UNESCO World Heritage Site as the Megalithic Temples of Malta. Archaeologists working on the site excavated numerous figures and statues, concluding that the temple was most likely the site of a fertility cult. Local folklore tells the tale of a giantess eating nothing but honey and broad beans who bore a child from a man of the common people. Carrying the newborn under her arm, she built the temples in a day for the people to worship her. The site was first examined in 1827, but after excavation it soon fell into decay. It wasn’t until 1933 when the site was revisited in an attempt to preserve the grounds and surrounding areas. 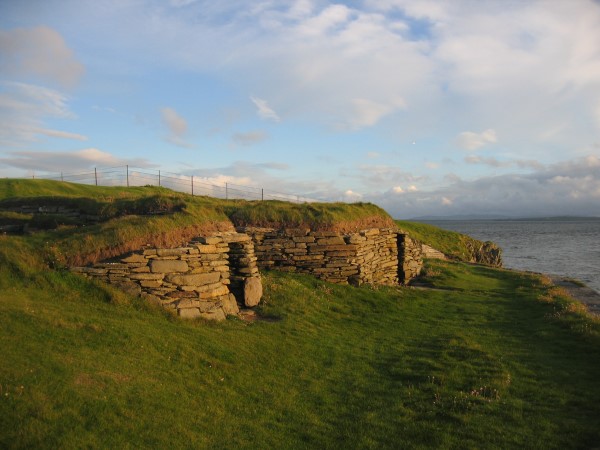 Situated on the island of Papa Westray in Orkney, Scotland is a farmstead believed to be the oldest preserved stone house in northern Europe. Radiocarbon dating shows the house was occupied from 3700 BC for around 200 years, far earlier than similar houses on the Orkney Mainland. Although now standing close to the shore overlooking the sea, they would have originally laid inland. Constructed on an earlier midden, the farmstead consists of two rounded-rectangular thick walls, with very low doorways. Linked by a long passageway, it is likely that the larger room was used as a workshop or possibly a second house. Evidence from the surrounding middens show the inhabitants were keeping cattle, sheep and pigs, whilst also cultivating barley and wheat and line-catching fish. Despite its age, the site is in relatively good condition, with the 1.6m high walls still freestanding. The Knap of Howar remains in the care of the agency ‘Historic Scotland’.

Monte d’Accoddi lies situated between the coastal town of Portree Torres and the city of Sassari, Italy. Quite unusual for an island in the Mediterranean, the site is a large platform pyramid originally standing 5.5m tall. It is believed to have been constructed and used as a temple or altar in around 4000 BC. Loosely translated as ‘stone mountain’, the site has a menhir (standing stone), a dolman and a stone sphere. Complete with a causeway, the pyramid is more commonly known as a ziggurat. It is believed the temple resides over a man-made cave below, similar to the Egyptian Pyramids. However, the cave remains as pure speculation, with no attempts so far at discovery. Despite massive reconstruction in the 1980s and further excavation, Monte d’Accoddi has unfortunately never attracted the amount of tourists originally envisioned, even with its rare, out of place artifacts. 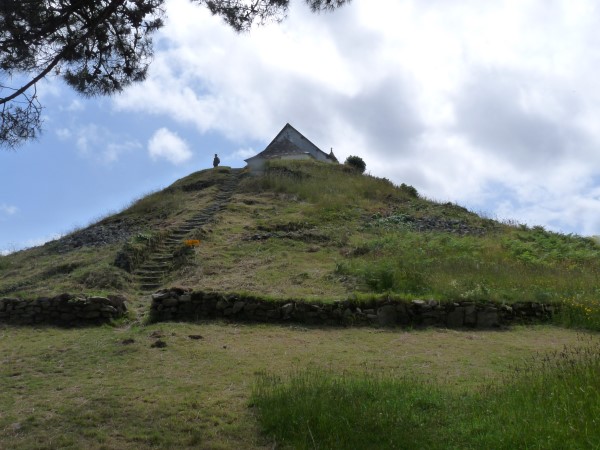 The Saint-Michael tumulus is a megalithic grave located just east of Carnac in Brittany, France. Erected in 4500 BC, it is the largest grave mound in all of continental Europe, standing approximately 10m tall and 120m wide. Excavation first began in 1862 when researchers found a central vault containing fairly prestigious funerary furniture including axes, pearls, flint tools and the mineral sillimanite. These artefacts along with others can be found in the Carnac Museum. Unfortunately, a lot of the underground galleries have been closed to the public due to safety reasons, but some chambers are still viewable via a guided tour. 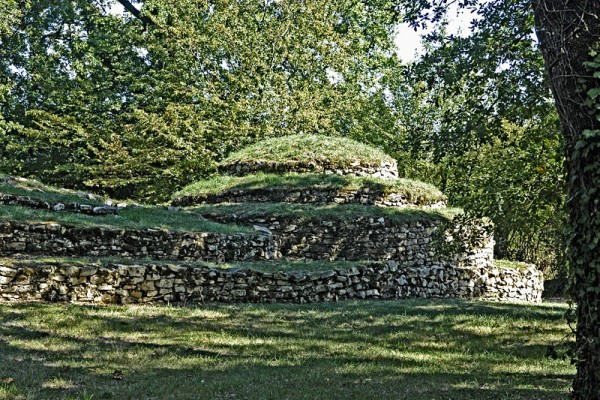 Otherwise known as the Necropolis of Bougon, the Tumulus of Bougon is located near La-Mothe-Saint-Héray, France, and is a group of five Neolithic barrows. First discovered in 1840, these prehistoric monuments have been dated to 4800 BC. During the first excavation of the first tumulus, over 200 skeletons were discovered. They had been buried in three layers and separated by stone slabs. It has been established that the grave was abandoned shortly after construction, with the passageway blocked by a large stone. Approximately 1,000 years passed before the site was reused for burials by a completely different culture. Pottery, arrowheads, knives and scrapers were also discovered. The other four barrows contained less archeological finds, possibly due to the chambers having been reopened and the material reused around 3000 BC. Located nearby is the Bougon Museum, first opened in 1993, which contains much of the excavated material, along with replicas of similar settlements from Turkey and and Brittany.

Dating back to 4850 BC, the Cairn of Barnenez is located near Plouezoc’h in Northern Finistère and is considered to be the earliest megalithic monument in Europe. At over 72m long and 8m high, the cairn is built of approximately 14,000 tons of stone. Contained within are 11 chambers separated by passageways, most likely built under two different phases of building. The cairn has an astonishing presence of megalithic art. Throughout the passageways and chambers are engraved symbols depicting arrows, axes, waves, snakes and an often repeated U-shaped sign. Despite being first mapped in 1807, quarrying continued at the site until 1950. This activity threatened to destroy the monument until discovery of the first chamber led to the local community taking control. Starting from 1954 and lasting 12 years, extensive restoration and preservation began, along with further excavation. Today, visitors are able to indulge in an exhibition explaining the results of the scientific excavation as well as see many of the artifacts ranging from pottery to stone axes, blades and arrowheads.

Top 10 Oldest Universites in the World