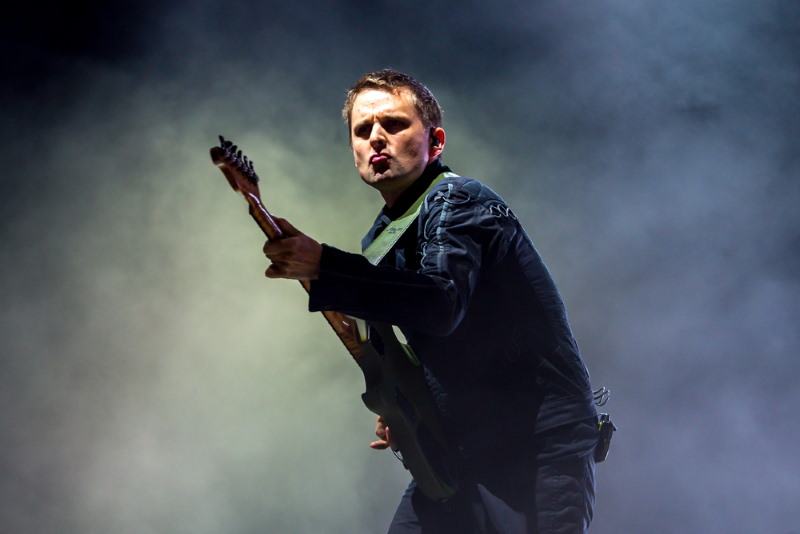 Coming in to their 20th year together, Muse have consistently been one of the most popular rock bands in the world. Here’s a countdown of the top 10 best Muse songs ever.

Starting out with spacey falsetto vocals from Matt as he sings that he “only dreams of you, my beautiful”, the song becomes something else when he breaks out his huge belting voice for the chorus. It’s not as loud and energetic as some of their songs, but the powerful vocals definitely make it a memorable one.

While it doesn’t have the classic sound that Muse has become known for, this is a slinky, sexy song that grabs your attention from the start. Bellamy’s sultry vocals sound great on the track, which features a heavy bass and a brief guitar solo. At a gig, it’s more likely to get the couples making out and slow dancing while everyone else just basks in the quiet euphoria of this futuristic tune.

This funky, disco-inspired track has a little bit of Stevie Wonder’s ‘Superstition’ and Queen’s ‘Another One Bites The Dust’ vibe about it, which is no bad thing. Mixing crunchy guitars and energetic bass with a brass section on the choruses, Panic Station is the fun, motivational anthem that ‘Survival’ should have been.

Uprising is a true anthem – the chorus of ‘They will not force us’ and ‘we will be victorious, so come on’ is like a call to arms for the disenfranchised. Bellamy’s voice is earnest and serious, while the trademark distorted guitars and bass are ever present. This is one of those songs that needs to be played loudly to be heard at its best.

Right from the guitar riff that opens the song, Plug In Baby sets itself aside from other rock songs. Bellamy purrs his ways through the verses and then belts the chorus with his powerful vocals, while the bass bounces along under the heavy guitar sounds. It’s a fan favourite purely because it epitomises the progressive hard rock sound that Muse have become known for, and it’s no wonder they used it as the lead single from Origin of Symmetry.

Arguably one of their most famous songs, Muse’s cover of Feeling Good has been used for adverts and TV shows since its release in 2001, and it’s easy to see why; the way the verses start off quietly with some simple, jazzy piano work and then explode into the stomping chorus is so dramatic. Add in the soaring vocals and the breakdown towards the end, and you’ve got a cover that’s been turned into a classic Muse song.

With the distinctive opening riff, Citizen Erased is a prime example of the band’s ability to take a simple idea, and then switch it around, play with it and blow it up into a soaring rock song. Bellamy’s falsetto on the chorus makes it hard for most listeners to sing along but it doesn’t stop them trying, as despite its length at almost seven and a half minutes, it is a set-list favourite and one of the band’s most popular songs.

A key Muse trademark is to have a range of volumes in the song, and that is never more evident than in the first minute of New Born – starting with a piano part that sounds like something out of a haunted house film, Bellamy’s quiet vocals get higher and higher in pitch until the crunchy guitar riff comes in and takes the song in a whole new direction. It’s a thumping, heavy tune that still sounds fresh today.

Muse are best when they don’t hold back with the noise – with its overdriven guitars, a crunchy bass and a tight beat, Hysteria is a loud and proud track with some memorable riffs scattered throughout. The lyrics are triumphant and dramatic – “I’m not breaking down, I’m breaking out” – continuing Muse’s common theme about being yourself and breaking out of the norm, and the distinctive riff at the start is a crowd favourite at gigs.

1. Time Is Running Out

As with all good Muse songs, Time Is Running Out goes from one extreme to another and back again in a short space of time. The slinky bass line that opens it leads on to a hushed verse, which in turn gives way to a crowd-pleasing, stomping chorus that still rocks just as hard now as it did when it was first released ten years ago.

Check out many more top 10 songs of your favorite artists here.