Movie fans have never had it so easy. We live in a golden age of convenience and have digital catalogues full of titles from every genre and every era at our fingertips – and they’re all ready to be viewed anytime and anywhere we please. Of course, we’d like to kid ourselves that we cherish this modern opportunity and use it to catch up with some of cinema’s brilliant, must-see classics, but in reality we’re much more likely to watch a movie we’ve seen dozens, if not hundreds, of times before. Some movies have that indefinable element that just makes them so easy to watch time and time again without the experience ever getting boring. Whether you’re channel hopping late at night, rooting through your DVDs or idly browsing Netflix, some of these movies are irresistible for just one more viewing. 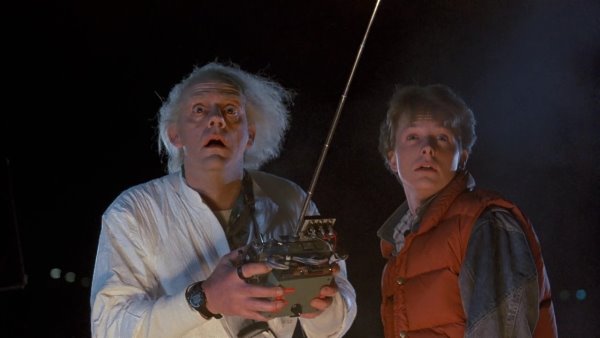 Horror movies aren’t usually known for their rewatch value. Once you know who dies and when the scares are coming you’ve kind of experienced all the best parts, and it’s hard to recreate that feeling of suspense and terror on repeated viewings. Shaun of the Dead is one of the few exceptions. Sure, the comedy factor works in its favour, but the movie is still tense and scary after multiple viewings thanks to a genuinely likeable cast of characters who you really don’t want to see get devoured by roaming hordes of zombies in London. Director Edgar Wright’s attention to detail also means that there are plenty of clever genre references tucked away as visual gags, and the sharp script is full of one-liners and call-backs which you’re bound to have missed the first few times you watched it.

Back to the Future is one of those rare blockbusters where everything works together perfectly. So many scenes from the flawless script – the Delorean clock tower race, ‘Darth Vader’, the Johnny B. Goode performance, the skateboard chase – have become iconic cinema moments and there’s something so timeless about the ‘fish out of water’ concept mixed with the time-travel shenanigans. It’s nostalgic and sweet without being saccharine and although the sequels are sadly a mixed bag, the original Back to the Future will always be a feel-good popcorn classic ready to be watched over and over.

Die Hard is without a doubt one of the best action movies ever made. Before John McClane became a superhero cop in the not-so-great sequels, the character was climbing through ventilation shafts in a grubby white vest and taking down armed German robbers. Willis is at his charismatic best in one of his first starring roles, Alan Rickman turns in a deliciously scene-chewing performance as baddie Hans Gruber and the action is hard-hitting (well it is called Die Hard, after all). The whole movie just flies along as it bounces focus between McClane hiding in the sieged building, Gruber calling the shots in the boardroom and the cops outside trying to break in. Die Hard also has the honour of being set at Christmas, so it’s the perfect antidote to all those Santa movies you’ve seen countless times over the holidays.

Killer rabbits, holy hand grenades and limbless knights could only come from the minds of Monty Python. For their first ‘proper’ cinematic outing with all new material (And Now For Something Completely Different only featured old sketches which had been refilmed), the troupe attempted a historical epic in the only madcap way they knew how. The result is one of cinema’s greatest and silliest comedies. Monty Python mixed in their TV sketch format with a long-form plot so the movie is not quite as much of a standalone effort as The Life of Brian is, but the tireless, farcical energy of the movie is what makes Holy Grail such a rewatchable and endlessly quotable daft treat.

It seems quite ironic including Groundhog Day on a list like this. After all, the movie’s premise sees Bill Murray’s gruff, uncaring weatherman trapped in an unbearable loop where he must live the same day over and over again. However, unlike this endless, repeatable hell, Groundhog Day is a complete joy to watch over and over. It’s a smart, original comedy with a high concept which plays to Murray’s strengths, and the story has a well-deserved uplifting vibe.

It’s not just light-hearted laugh along movies that we keep coming back to time and time again. Sometimes we’re all in the mood for some foul-mouthed criminal drama, and crime movies don’t come any better than Martin Scorsese’s ultimate wise guy flick Goodfellas. Charting the rise and fall of mobster turned FBI informant Henry Hill, Goodfellas is a violent, dark-humoured take on a true story and the whole seedy, glamourous world of organised crime is brought to vibrant life by Scorsese and his toolbox of cinematic tricks and skills. Featuring larger-than-life characters, a quotable profanity-laden script and an impossibly cool soundtrack, this iconic crime classic sizzles with stylish energy

The absorbing Technicolor world of Oz is pure escapist fantasy. The adventures of Dorothy, Tin Man, Scarecrow, Lion and Toto on the Yellow Brick Road just seems to get better with age, and the Wizard of Oz really is a “they don’t make them like they used to” timeless classic. Few movies have the power to transport its audience to a completely different world, but the Wizard of Oz is still one of the most magical movies ever made and a pure celebration of cinema.

Like any good musical, rewatching Rocky Horror Picture Show is like giving one of your favourite albums another listen. Over the years it went from being a box office failure to a pop culture hit, and the musical has truly cemented itself as a cult classic. Of course, most people remember Rocky Horror for Tim Curry’s eccentric performance as Dr Frank N Furter and for the Time Warp, but the musical is chock full of unforgettably camp songs and thoroughly over the top performances from pretty much everyone involved. The crazy mashup of sci-fi B movie, drive-in exploitation and late night debauchery helped make Rocky Horror a true lightning in the bottle cinematic phenomenon. Whether you’re quoting along to the script at a midnight screening with dozens of fans in fancy dress or just singing away in your living room, Rocky Horror is an endlessly watchable guilty pleasure.

Modern blockbusters have changed. Studios are so obsessed with trying to launch new franchises and adapt existing properties that few new releases really feel fresh or innovative, and far too many race along into production with an eye toward meeting a coveted summer release date. Many big-budget extravaganzas fail to hit it out of the park, and even some of the most enjoyable ones have their fair share of problems. Jurassic Park proved that it can be done right. Steven Spielberg’s adaptation of Michael Crichton’s best-selling novel really set the standard for the modern summer blockbuster (like the director had done many years before with Jaws), and 20 years after its release it still manages to create awe-inspiring wonder (and terror). It’s a fun thrill ride of a movie and, even though the CGI doesn’t quite look as groundbreaking as it did during its original theatrical release, Spielberg’s mix of practical, old-school effects and new computer technology still manages to truly impress. When John Williams’ bombastic score begins to swell as Dr. Grant sees the Brachiosaurus moving in herds for the first time, you can’t help but sit down and watch until the very end.

Let’s face it, plenty of comedies can be watched countless times over without the humour even wearing thin, but few are as perfect as Airplane. It doesn’t matter how many times you’ve seen it or whether you’re not usually a fan over the top spoofs – Airplane has the power to bring a big goofy smile to anyone’s face. It’s hard to believe the sheer amount of jokes crammed into the movie’s 88 minute running time as the classic comedy barely gives viewers enough time to laugh before it shoots out another sight gag, deadpan one liner or witty back and forth (the movie apparently manages on average 3.2 gags per minute). Sadly the disaster movie spoof is responsible for every lousy parody movie in the years since, but no amount of Epic Movies or Scary Movie sequels could ever detract from the genius that is Airplane.