There’s a lot of fun to be had with movie drinking games. They’re the perfect way to enjoy a movie that you have already seen dozens of times before and, let’s face it, they can get you wasted pretty quickly. With the right movie and the right supply of booze, some of these drinking games will test the endurance of even the hardest of drinkers. So don’t worry if you can’t get to the end of the movie; as long as you’re drunk by the time the credits start rolling then you still rightfully deserve a prize (well, a hangover) for participation.

10. Anchorman: The Legend of Ron Burgundy 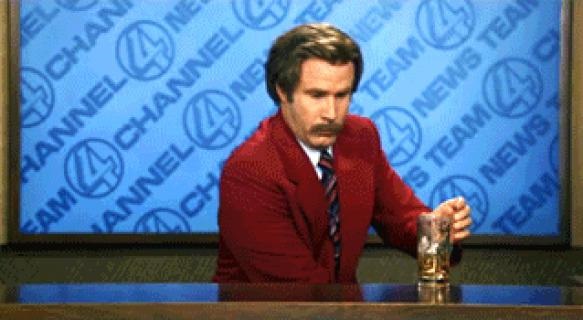 There’s no better way to feel like you’re taking part in the excesses of the characters in cult comedy classic Anchorman than trying to match them drink for drink. Scotch would be the preferred tipple of choice, but you can always just take a swig of whatever you have in your hand when you see someone on screen doing the same. Also take a drink whenever a character lights a cigarette, makes a pass at a woman or if someone says “San Diego”. 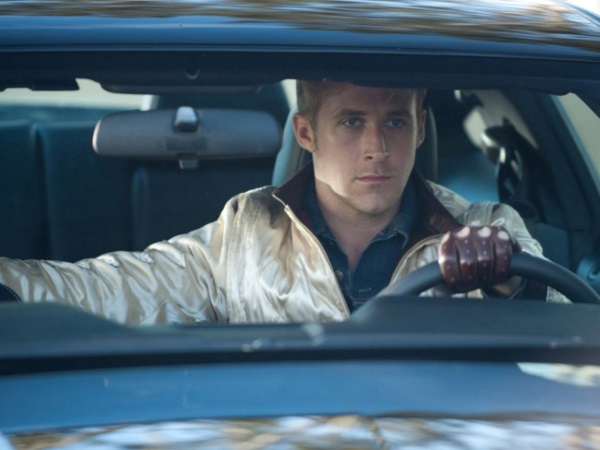 Stylish violent thriller Drive follows an impassive, mysterious stunt driver called “The Driver” (played by Ryan Gosling) as he is drawn deeper and deeper into the criminal underworld by moonlighting as a getaway driver. Rarely speaking and taking long pauses when someone tries to talk to him, Gosling’s central performance is both memorising and a little bit strange. In fact, it’s so strange that it’s easy to build a drinking game around it. Drink during the entire time Ryan Gosling leaves a pause when he is being asked a question by another character or whenever he stares longingly off camera. You can even double-down and drink for every time he actually does speak (don’t worry, it’s not often). 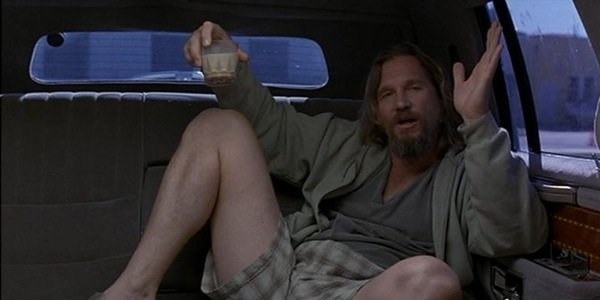 The Coen Brothers’ weird noir-inspired The Big Lebowski has become a cult favourite since its release. The endlessly quotable movie features Jeff Bridges as ‘The Dude’; a schlubby aging hippy who unwittingly gets drawn into a kidnap plot which is way over his head. The Dude’s drink of choice is a White Russian cocktail which is a mixture of vodka, Kahlua and milk. Many fans of the movie like to match The Dude drink for drink, which is 9 in total throughout the movie (technically he drops one, but that would just be a wasted opportunity). A word of advice though, the large quantity of milk is more likely to have an effect of you than the alcohol. Alternatively, you can drink each time someone says ‘dude’ (which would be 161 times in total) or whenever a character throws a bowling ball. A similar game came be played with the Coen’s other cult classic Fargo – just drink every time a character says “Yah” or “You betcha”.

7. Four Wedding and a Funeral 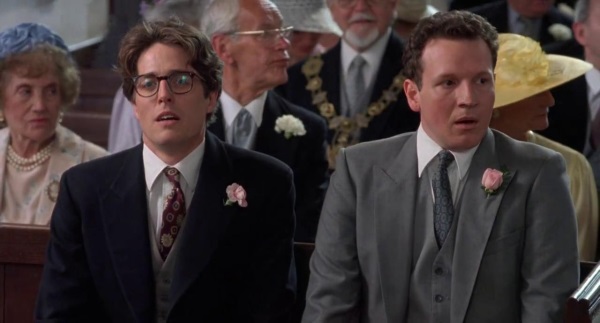 Lots of people aren’t a fan of romantic comedy movies, especially if they are written by Richard Curtis and star a bunch of stammering, polite English character actors. Thankfully, one of Curtis’ earliest cinematic offerings, Four Weddings and a Funeral, can be made much more tolerable with the help of alcohol and a keen eye on the acting talents of Hugh Grant. Hugh spends a considerable amount of screen time either stuttering his words or saying “Umm” or “Urrr” (or some variation) and his performance can be enjoyed much more by making a drinking game out of it. 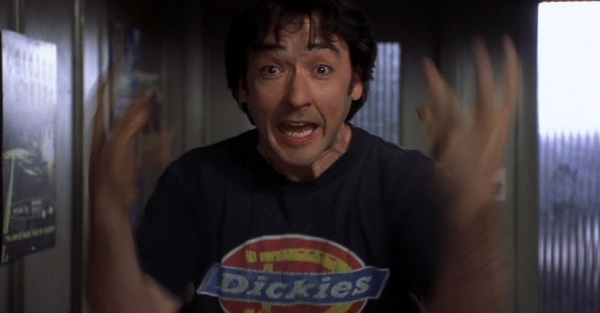 Another rom-com which lends itself surprisingly well to a drinking game is High Fidelity. To the movie’s credit, this adaptation of Nick Hornsby’s novel is a smart take on romantic comedies and doesn’t rely on the clichés and usual trappings of the genre. Nonetheless, High Fidelity has its fair of moping around and pining from John Cusack’s character Rob; a thirty-something record store owner who spends most of the movie venting his frustrations by forming ‘top 5’ lists. These lists cover almost every topic Rob can come up with like ‘the top 5 best songs about death’ and ‘top 5 dream jobs’. Cusack often breaks the fourth wall by explaining his choices to the camera, and each item on these lists is a good opportunity to drink. However, if you really want to get drunk you can also take a swig each time Rob mentions Ian (the man who is dating his ex-girlfriend) or for each time he yells at his hapless work colleague Barry.

5. Fear and Loathing in Las Vegas 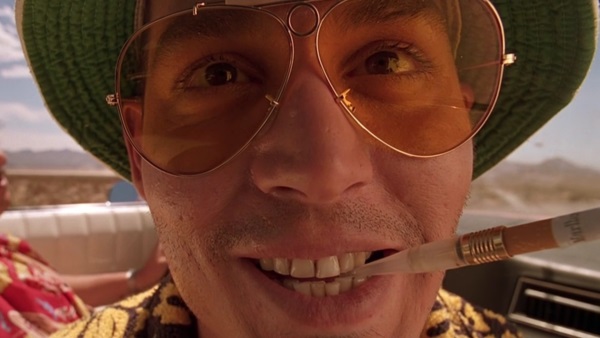 Terry Gilliam’s adaptation of Fear Loathing in Las Vegas features Johnny Depp and Benicio Del Toro snorting, smoking and popping nearly every drug known to man. It’s a trippy, crazy movie which is dedicated to excess, so a drinking game is the perfect accompaniment. To keep on the legal side of things, take a drink any time you see a character either smoking, drinking or partaking in any other addictive substance. Bonus points if you also drink anytime an American flag is on screen (there’s quite a lot of them). A much more depressing drinking game alternative is for Leaving Las Vegas. This drama features Nicolas Cage as an alcoholic who is literally trying to drink himself to death, so it is quite hard to keep up with him and you’ll likely be a paranoid, nervous wreck at the end of the movie if you do. 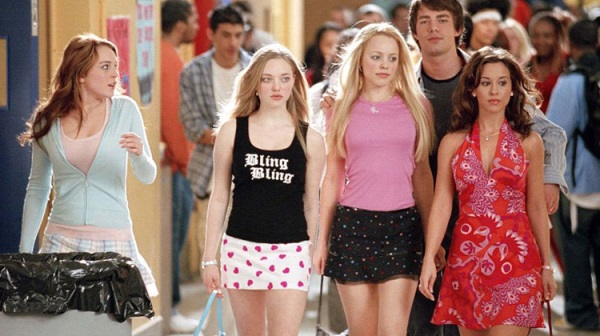 Also known as “that one good thing that starred Lindsay Lohan”, Mean Girls is a gleefully bitchy movie set in the seedy world of high school cliques. Like any snappy teen comedy, the popular girls have their own rules and buzzwords which they expect others to follow. Take a drink any time the mean girls mention their rules or when they backstab another character (bonus drinks if they do so via a three-way phone conversation). Also drink whenever a character uses the words ‘fetch’, ‘Gretchen’ or ‘plastics’ in a sentence. 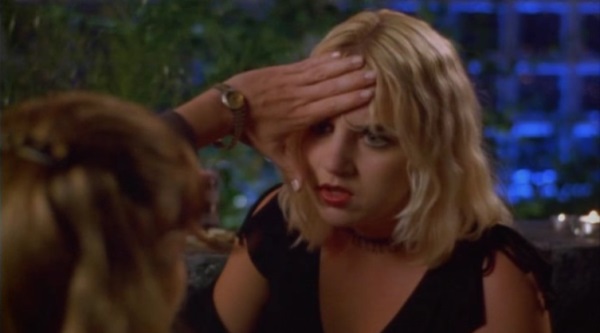 No one ever said that a movie has to be good to have its own drinking game. In fact, playing drinking games with bad movies often make them much more bearable and enjoyable. Indie director/writer/actor Tommy Wiseau’s 2003 movie ‘The Room’ set a new benchmark in awful filmmaking and it quickly became an almost overnight sensation for being ‘so bad it’s good’. While it’s debatable whether the movie can ever be considered good on any level, it does make for a very fun drinking experience. Drink each time: Lisa says she loves (or doesn’t love) someone, there’s a weird sex scene, a character walks into a room and says “Oh hey” or “Oh hi” and any time Johnny (Wiseau’s character) abruptly changes the conversation. Remember to stop drinking immediately and seek medical attention if you start thinking that The Room is a legitimately good movie.

Die Hard is simply one of the best action movies ever made, and the Die Hard drinking game is an excellent reason to revisit Bruce Willis’ finest performance as hard-boiled cop John McClane (not that anyone needs a reason to watch Die Hard). Also, it should help you get rid of any memories concerning the dire sequels. Take a drink every time: McClane uses a walkie talkie, McClane starts talking to himself, someone mentions Christmas, there’s a shot of McClane’s feet (or he mentions his feet) and if a character says “cowboy”. 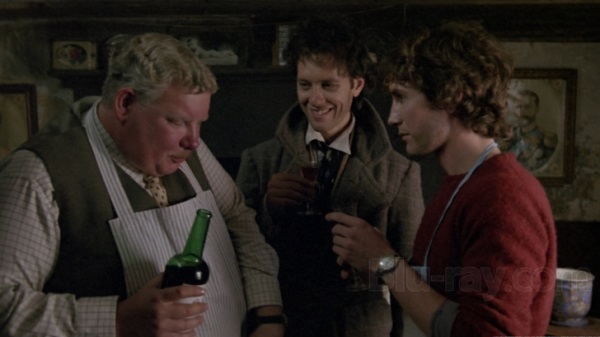 You know a drinking game has to be good when it comes with a death warning attached to it. Make no mistake about it, trying to keep up with Richard E. Grant’s character in the cult British comedy Withnail & I will lead to certain death. Throughout the course of the movie, Withnail drinks 1 pint of cider, 9 and a ½ glasses of red wine, 13 whiskeys, ½ a pint of ale, 2 and a ½ shots of gin, 6 glasses of sherry and a big gulp of lighter fluid. Although participants are allowed to substitute the lighter fluid for a shot of clear alcohol or vinegar (which is what Grant drank to film the scene), this comes to 58 units of alcohol. For those who like to keep count, this is 3 times more than the recommended weekly intake of alcohol for a male. Rather than match Withnail drink for drink a much easier variation is just taking a sip of a drink whenever Withnail does. This is still no easy feat, but at least it won’t kill you.

Top 10 Things To Do When You Are Bored