In the past, travellers simply required somewhere safe and comfortable to rest. We have moved on from that, via convenient city stopovers and mid-range package tours, to huge resorts that are essentially mini-cities catering for every need. This list details the ten largest hoteslt in the world. 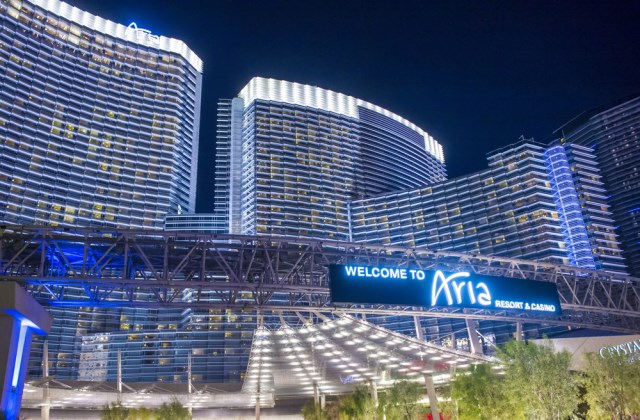 The tenth largest hotel in the world is the Aria Resort and Casino in Gambling city Las Vegas, USA. The name refers to its central position on the CityCentre complex of the Las Vegas Strip in Paradise, an aria being the focal point of an opera. Two curved glass and steel high-rise towers join at the centre to make 61 storeys with 4,004 rooms and suites, restaurants, theatre, etc. The AAA five diamond hotel is the largest ever to receive LEED gold certification, due to its energy-saving design and functions (LEED stands for Leader in Energy and Environmental Design). The three-storey lobby features natural materials, and a reclaimed silver sculpture of the Colorado River. 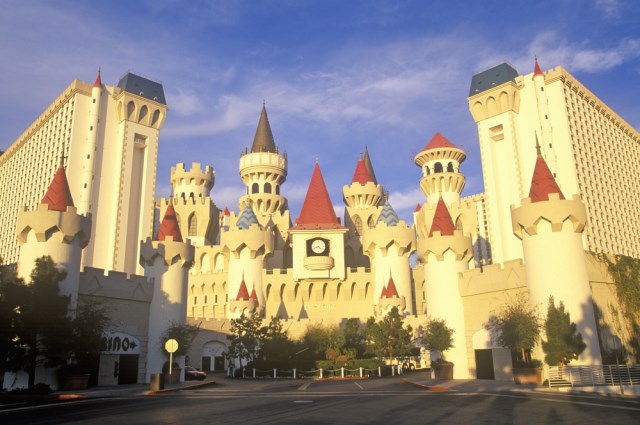 Number nine is also in the gambling city, this time at the Tropicana-Las Vegas Boulevard intersection. The Excalibur Hotel and Casino is named after the sword of King Arthur. It continues the theme with a castle-like façade, and until modernisaton in 2007, sported a Merlin look-alike gazing down from a turret. Overhead pedestrian bridges connect the hotel with nearby casinos, and there is a free shuttle bus linking it to sister properties. The 4,008-room Excalibur has appeared in several video games and television productions. Restaurants include Dick’s Last Resort, where servers are deliberately rude to diners. 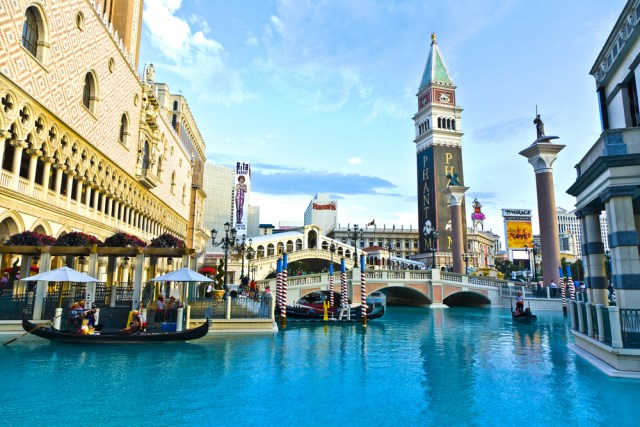 Europhiles might prefer the eighth largest, the Venetian Las Vegas, a 4,049-room hotel and casino between Harrah’s and the Palazzo. Previously the site of the Sands Hotel, the Venetian opened in 1999 with a fanfare of trumpets, white doves and singing gondoliers. Italian actor Sophia Loren was on hand to christen the first motorised gondola. Replicas of the Doge’s Palace, the Lion of Venice columns, St Mark’s Square, the Bell Tower, and the Rialto Bridge complete the illusion. In 2001, the Guggenheim Heritage Museum opened in the resort (there is one in Venice), followed two years later by the new Venezia Tower, which added 1,013 suites and a wedding chapel. 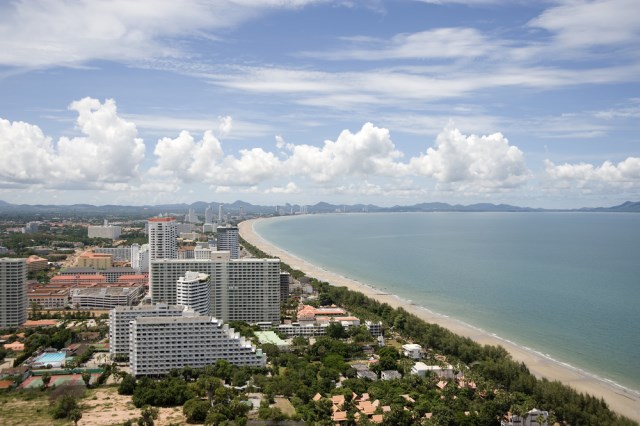 We leave the United States briefly to head to Pattaya in Thailand for number seven, the Ambassador City Jomtien at Sattahip, Jomtien Bay. About eight kilometres south of Pattaya, its 4,219 rooms overlook mountains or a private beach, close to Pattaya’s floating market. It consists of five buildings, each containing a hundred and fifty to two thousand suites, and has a convention centre, eight restaurants, nightclubs and bars. A sports and fitness centre claims to contain the largest swimming pool in Asia. Jomtien beach is popular for water sports, sponsored sports events and festivals. A 256-metre section contains Pattaya’s only gay beach. 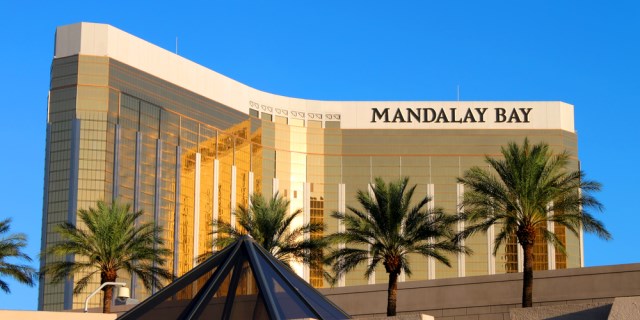 It’s back to Las Vegas for the sixth largest. Called THEhotel at Mandalay Bay, it is part of the Mandalay Bay complex. Its original lettering at 2003’s opening was “Mandalay Bay”, the same as that on the original tower, so it was altered to THEhotel in 2006. With forty-three storeys, it comprises 4,332 suites, and boasts a Michelin-starred Alain Ducasse restaurant, MiX, at the top. The hotel attracts a younger crowd that prefers urban chic to Vegas luxury, but wants access to the amenities around the complex. There are plans to re-brand it as the Delano in 2014, with redesigned rooms, and new bars and restaurants. 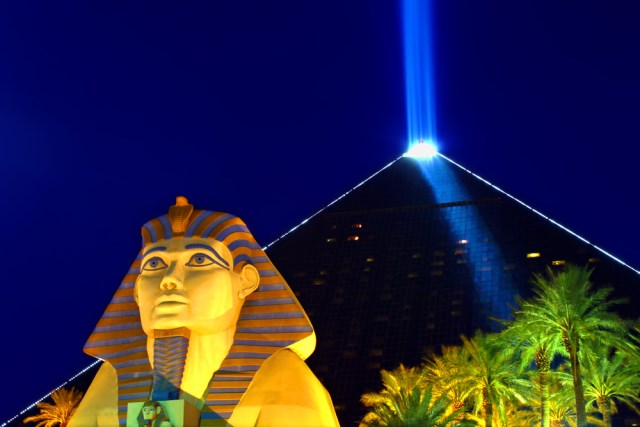 Halfway to the top, we find ourselves in…yes, you’ve guessed it. Named after the Egyptian city, the Luxor Las Vegas has 4,408 rooms lining the inside walls of a pyramid-style tower. When it opened in 1993, the pyramid was the highest building on the strip, and the Nile River Tour took guests along a river encircling the casino. It has since been renovated, with much of its ancient Egyptian theme lost. On its tip is the Luxor Sky Beam, the strongest light beam in the world, which shines behind a replica of the Great Sphinx of Giza. 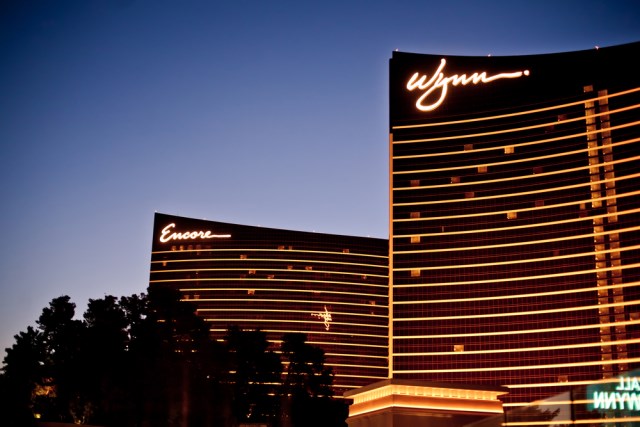 We stay in Vegas (as most things do, they say) for two hotels that combine to become the fourth largest in the world. Encore Las Vegas and Wynn Las Vegas are connected by a shopping arcade. The 2716-room Wynn was built by casino developer Steve Wynn on the site of the Desert Inn, and opened in 2005. It’s the first high-rise to wash its windows with an automatic system, and the first resort with a luxury car dealership onsite. The 2,034 rooms of the Encore were erected in 2008. Restaurants in the latter include “Sinatra”, which displays a Grammy and an Oscar on loan from the singer’s estate. 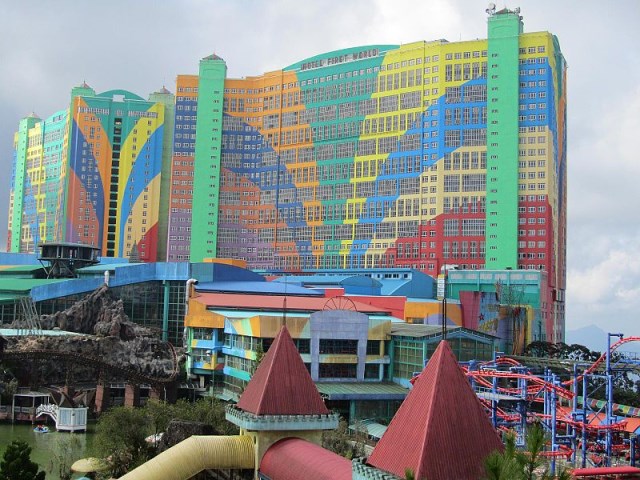 For number three, we move to the brightly coloured First World Hotel, part of the Genting Highway resort in Pahang, Malaysia. Nestling in the Titwangs Mountains, and accessible via the Genting Highway gondola ride, it has 6,118 rooms in two towers. Below this sits the First World Plaza, where guests can take advantage of shopping malls, fast food, arcades, casino and theme park. A replica of the Statue of Liberty, and an Oscar statuette, share Time Square with a small stage. The location also boasts the Watersplash Pool, a Cineplex and the Genting Sky Venture, the first free fall simulator in Asia. 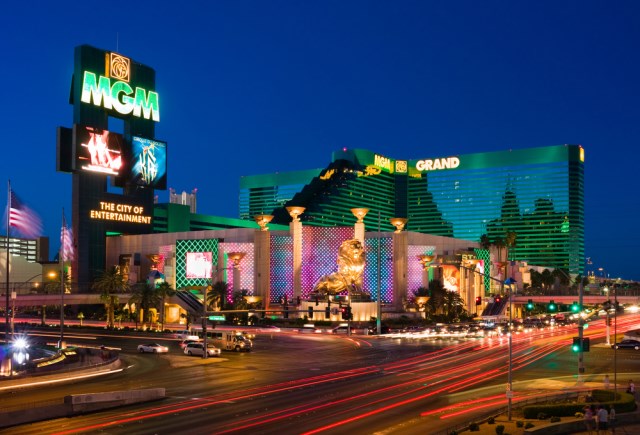 It’s no surprise to return to Sin City for the runner up. The MGM Grand had a Wizard of Oz theme when it opened in 1993, but it has since been renovated, along with the 6,852 rooms, taking inspiration now from Art Deco-era Hollywood. From 1999 to 2012, lions prowled a glass-sided tunnel in the casino area. To continue the MGM Lion motif, a large bronze lion has been placed above the entrance, and is the largest bronze statue in the United States. The casino, the largest in Clark County, is one of the casinos that was robbed in the 2001 film re-make of Ocean’s Eleven. 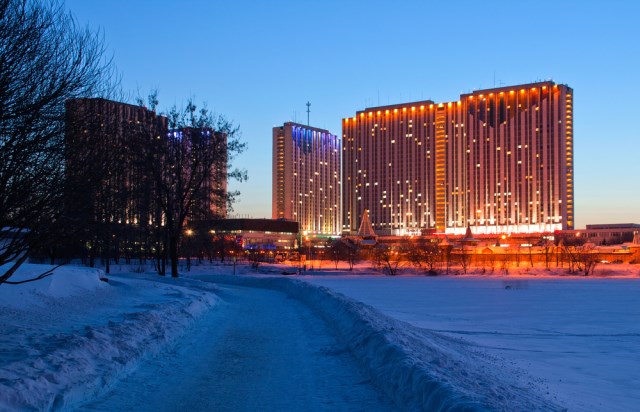 It is a surprise, though, to discover that the largest hotel in the world belongs to another continent, and another era. The Izmailovo hotel was built in 1979, to provide good quality accommodation for athletes competing at Moscow’s 1980 Summer Olympics. Its four buildings, with over seven thousand rooms, stand in the grounds of the Izmailovo village and Royal Estate. The estate was owned by the Romanovs, and was a favourite retreat of Tsar Alexei and his son, the future Peter the Great. Remaining buildings are ten minutes walk to the east of the Russian hotel, which overlooks the lake where Peter learnt to sail.

Designers and developers of large hotel resorts today have moved with the times, and have taken on board concerns about environmental impact. Several of the ones listed here have earned good accreditation in this respect. Where once the mob is said to have ruled, Michelin-starred restaurants and five diamond ratings are now a nicer kind of target.