A helicopter can land on almost any flat terrain, which is a major advantage over an airplane. It can also remain suspended in the air on site. A helicopter is very suitable for military purposes, as it can deliver troops and supplies to the most inhospitable regions. However, the helicopter is also used en masse in search and rescue operations, for transporting the seriously injured to a distant hospital or for monitoring traffic jams and traffic. Below is an overview of the ten largest helicopters that have ever been built. 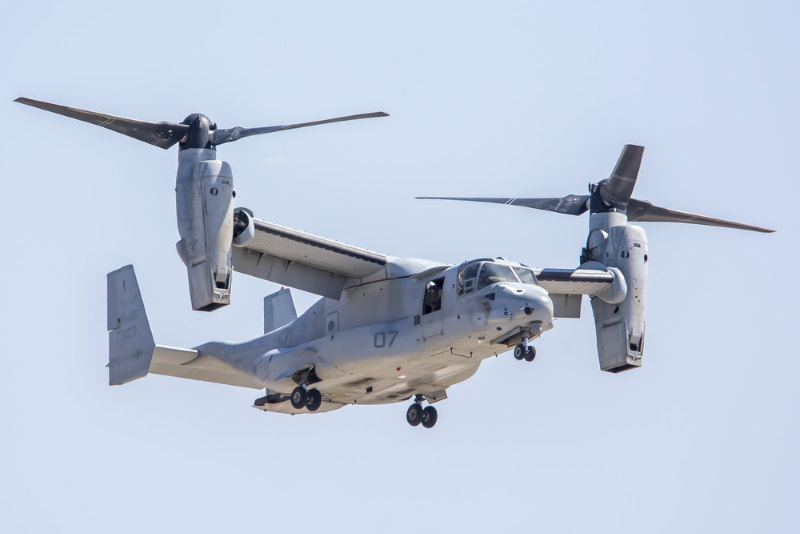 It looks a bit strange, the V-22 Osprey from manufacturers Bell and Boeing. The V-22 Osprey is the first device that was developed according to the so-called tiltrotor principle. The helicopter is equipped with two short, wide wings with a tilt rotor on each end. This rotor can also serve as a propeller and thus ensures both vertical and horizontal movement of the device. 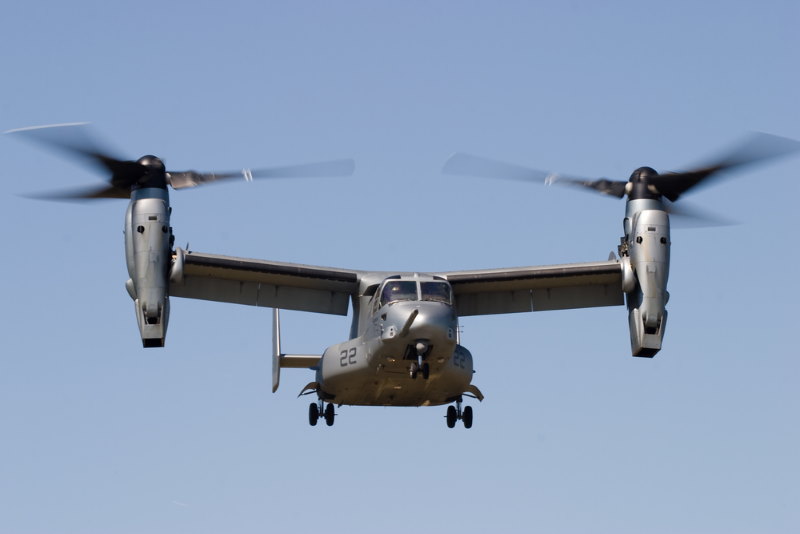 The V-22 combines the lift power of a helicopter with the horizontal speed of an aircraft. The device achieves an impressive speed of 550 kilometers per hour, while it can also carry 24 passengers. The V-22 Osprey is 17.5 meters long and weighs 8463 kilograms. 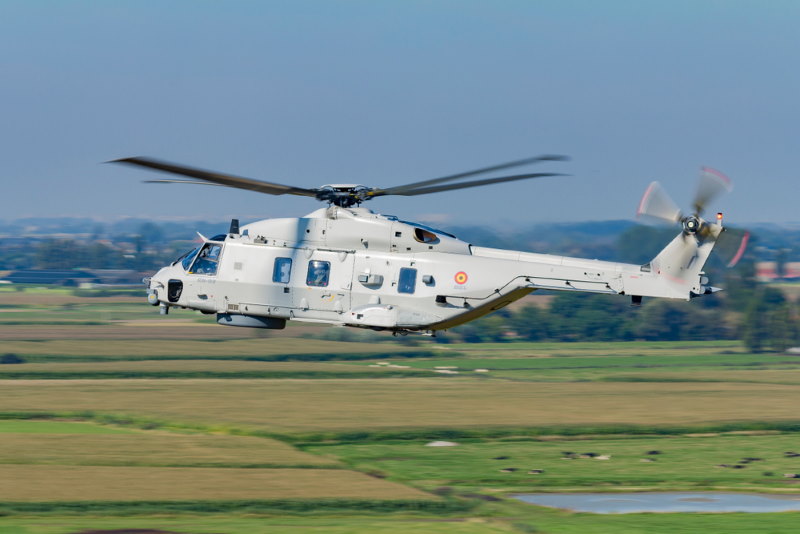 The NH90 is European-made. The helicopter was designed by NH Industries, a company founded by three major helicopter protagonists in Europe: the Italian Agusta, the French-German Eurocopter and the Dutch Fokker Aerospace. The NH90 is equipped with two engines and weighs about 5400 kilograms empty. The device is available in two versions: the NFH and the TTH. 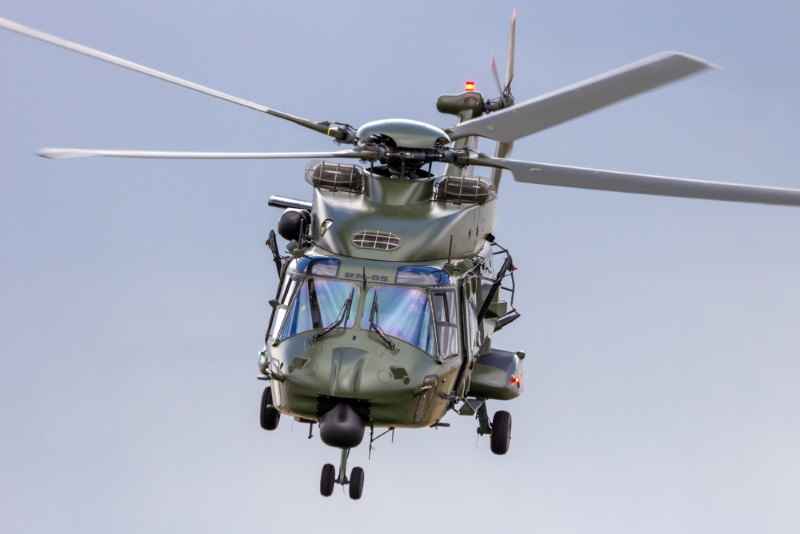 The NFH (Nato Frigate Helicopter) is primarily intended for fighting submarines. However, it can be used for many more purposes, including supplying ships and detecting and rescuing missing persons.

The TTH (Tactical Transport Helicopter) is mainly used to transport troops and supplies. About twenty soldiers or more than 2500 kilograms of supplies fit in this type. The NH90 is a large, well-washed heli with a length of 19.56 meters and a height of 5.30 meters. Its maximum speed is 305 kilometers per hour. 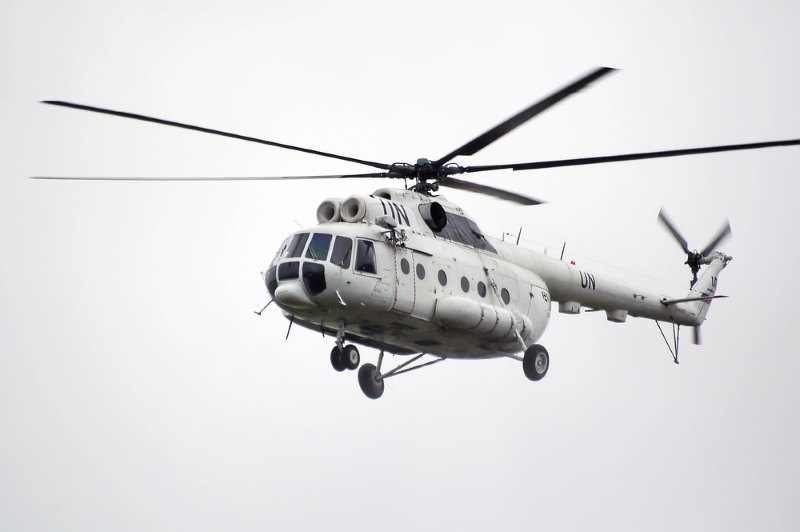 The Mi-8 is a Russian aircraft that served in the Soviet Air Force from 1967 onwards. The Mi-8 was originally intended as a transport helicopter, with a capacity of 28 to 32 passengers. The Mi-8 was later also used as a combat aircraft, equipped with guns and missiles, to target enemy tanks. 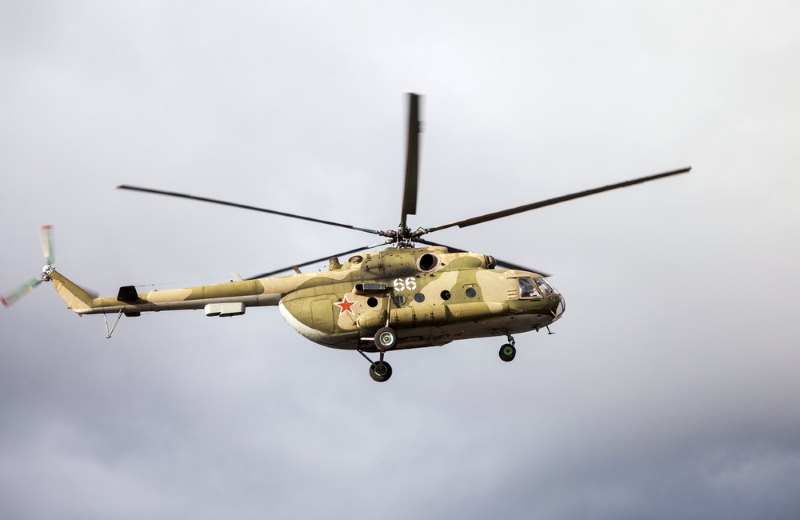 The first flight of a Mi-8 took place on July 7, 1961. Since then, more than 17,000 copies have rolled off the assembly line, making the Mi-8 the most produced helicopter in the world. The device is operational in more than 50 countries and is still being sold. The Mi-8 is over eighteen meters long and three meters high. When empty, it weighs 6,990 kilograms. Its maximum speed is 250 kilometers per hour. 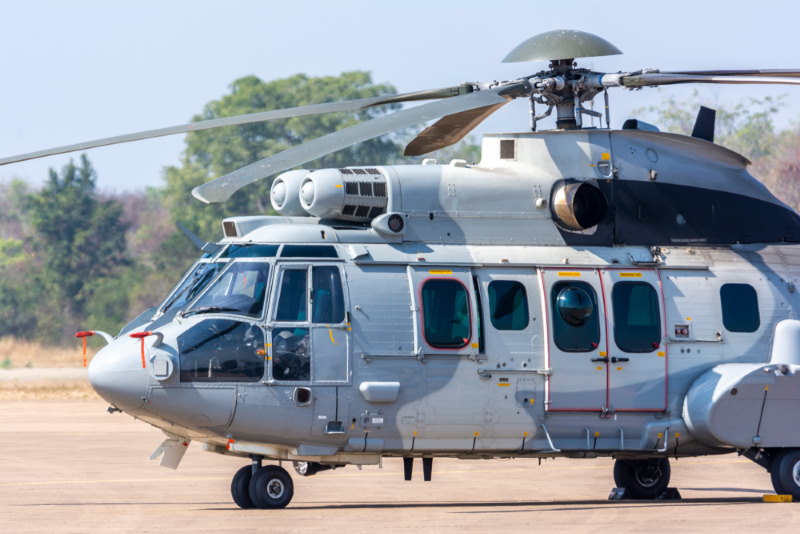 The H225M used to be called the EC725. Airbus Helicopters tested the first prototype on November 27, 2000. It was not until 2005 that the French forces deployed the H225M. The aircraft can be equipped with missiles, but it is primarily designed as a transport helicopter. The French army mainly uses the H225M to locate and evacuate people from a combat zone. 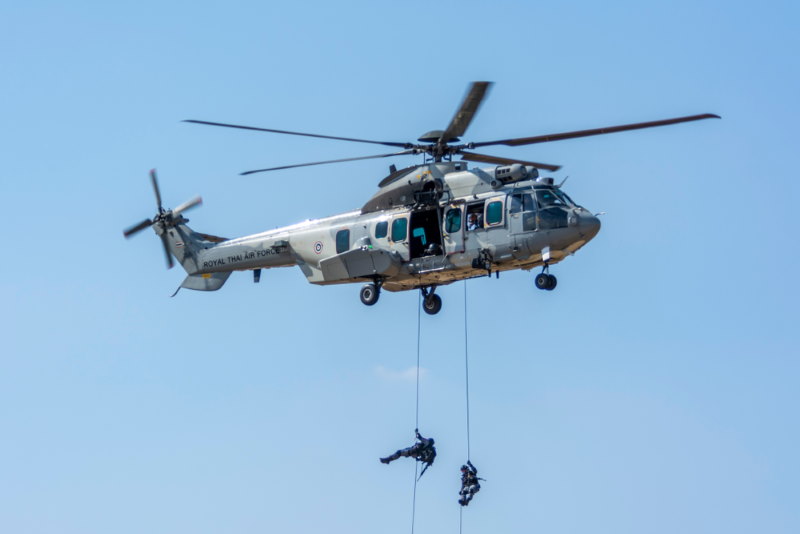 There are 29 seats in the cabin, but the helicopter can also lift a weight of 4750 kilograms. In addition to France, the armies of Mexico, Brazil, Malaysia, Indonesia, Kuwait and Thailand also have several H225M helicopters. The device is almost 19.5 meters long and weighs 5330 kilograms. The H225M reaches 324 kilometers per hour. 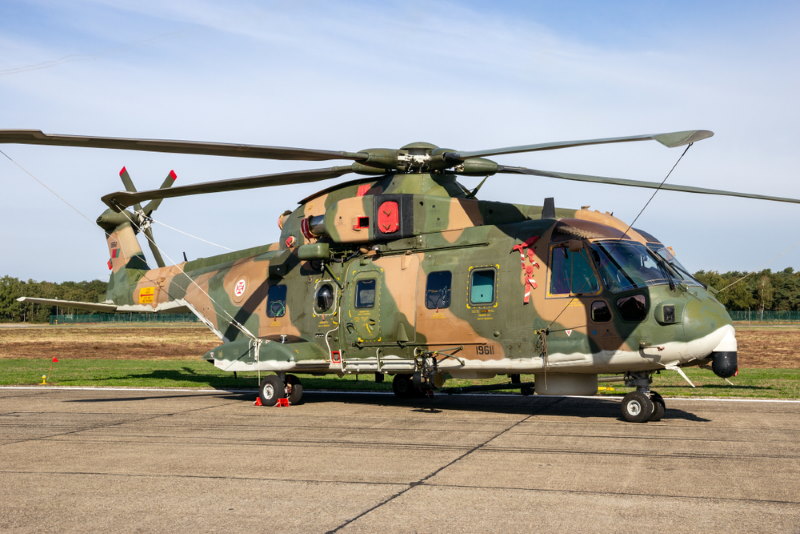 The design of the AW101, formerly called EH101, was the result of a collaboration between Westland Helicopters in the United Kingdom and Agusta in Italy. The first AW101 prototype first took to the air on October 9, 1987. 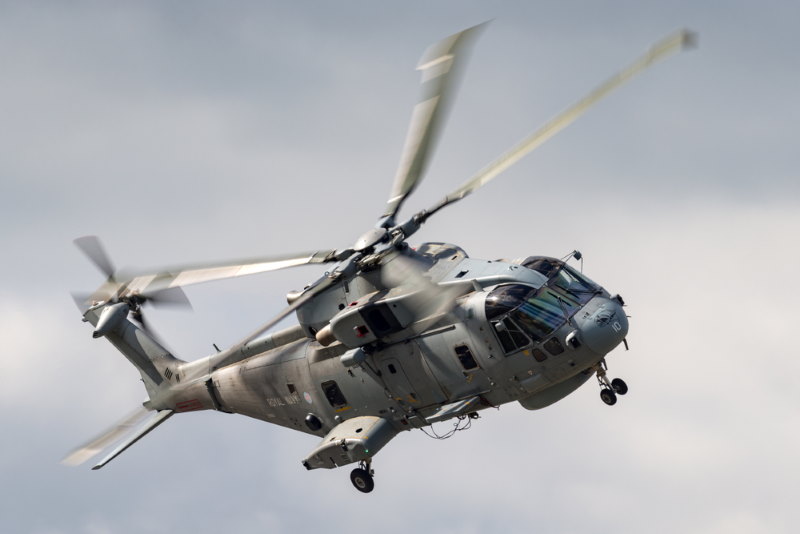 The large helicopter can be used for both military and civil applications. The general introduction of the AW101 followed in 1999. Since then, the British, Italian and Danish air forces have been using this helicopter. A modified version of the AW101 is used for commercial flights. The Canadian Air Force uses yet another variant for sea rescue operations. The AW101 is about 19.5 meters long and weighs 10,500 kilograms when empty. 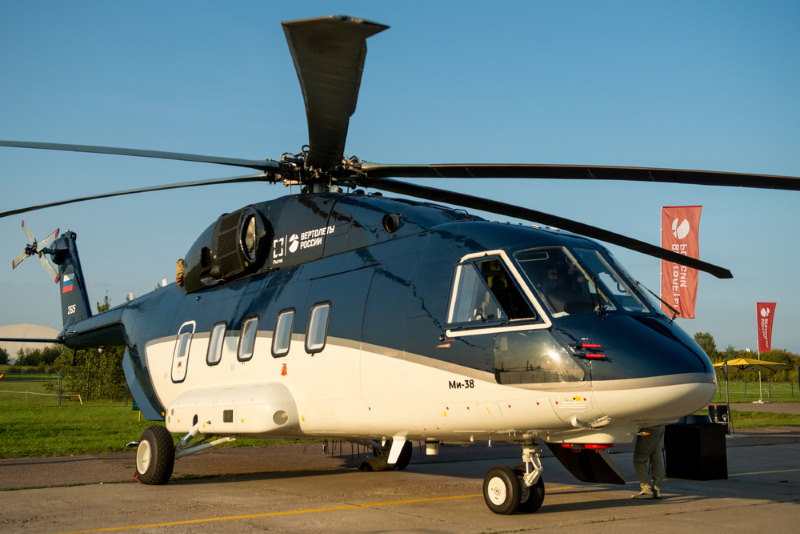 The large Russian helicopter Mi-38 was intended as a replacement for the Mi-8 and the Mi-6. The first prototype went up in 2003. The engineers at the Moscow Helicopter Factory designed the Mi-38 as a versatile aircraft that can be used for both transport and rescue operations. 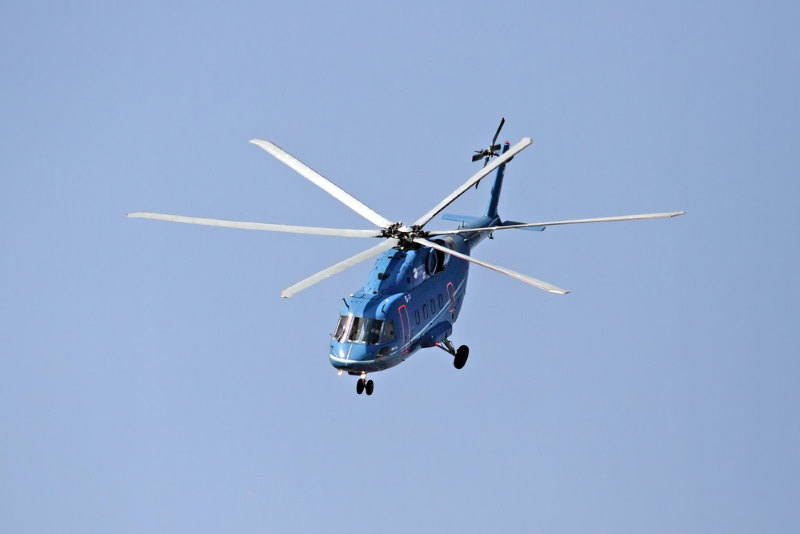 The extensive interior of the Mi-38 can even be converted into a kind of flying military hospital. The Mi-38 is capable of carrying no less than 32 passengers or 6000 kilograms of cargo. The device is 19.7 meters long, 5.13 meters high and weighs about 8300 kilograms when empty. Its maximum speed is 275 kilometers per hour.

The Z-18 medium transport helicopter is Chinese-made, designed and manufactured by Changhe Aircraft Industries Corporation. The helicopter made its maiden flight in 2014, but was finally put into service in 2018. The Z-18 is a further development of the type Harbin Z-8. The Z-18 can fly much higher altitudes compared to its predecessor. It is currently used by the Chinese military. The Z-18 is 22 meters long and weighs 2050 kilograms. The device reaches 336 kilometers per hour. 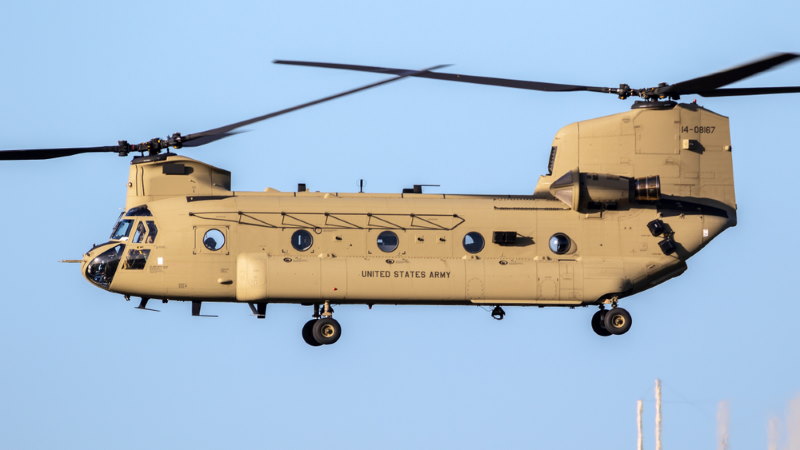 The US Army’s workhorse, the CH-47F Chinook, was developed in the late 1950s. The device has been operational since 1962. This two-rotor transport helicopter is primarily intended for transporting troops and equipment to a combat zone. However, the Chinook also serves as a rescue helicopter for emergency evacuations and search and rescue operations. It can even be used to fight large fires. Under the Chinook one hangs a water bag that can hold up to ten thousand liters of water. 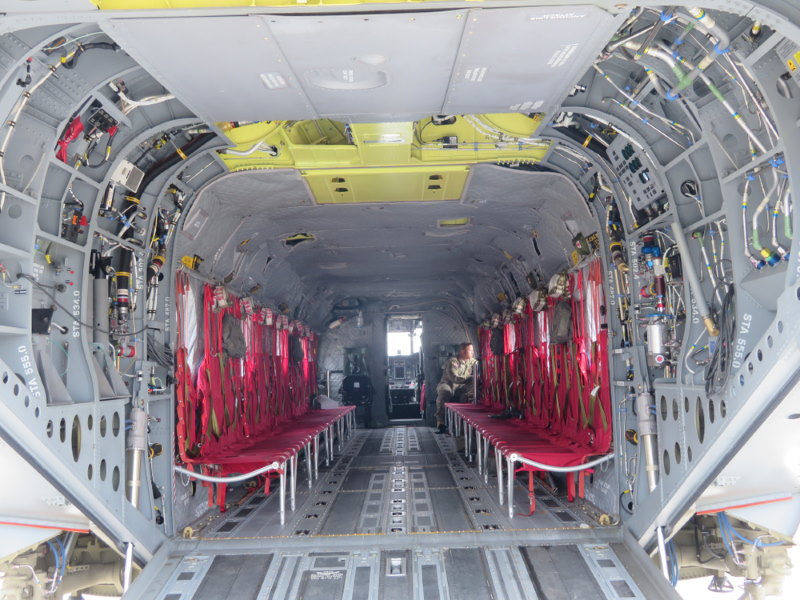 The latest versions of the CH-47 contain high-tech gadgets with digital displays and electronic control options. The device reaches 315 kilometers per hour. The Chinook is 30 meters long and 5.8 meters high. When empty, the helicopter weighs 11,151 kilograms. 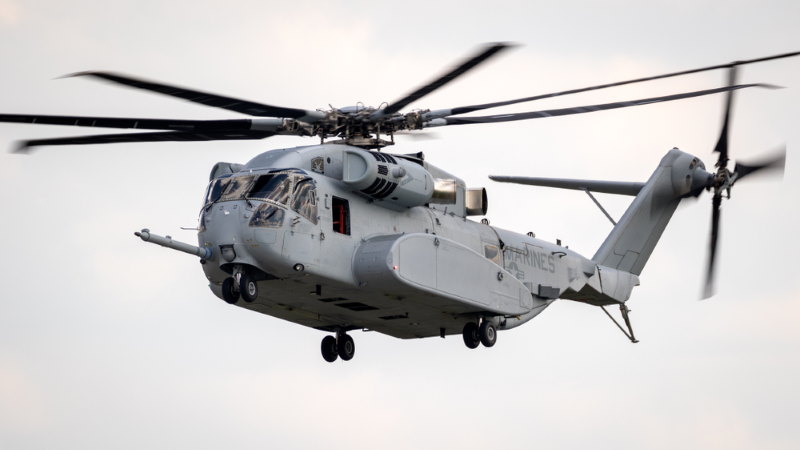 This type of large helicopter is a brand new development from the American helicopter manufacturer Sikorsky. The CH-53K is a successor and further development of previous CH-53 versions. The first test flight took place on October 27, 2015. In 2018, the US military received the first aircraft. 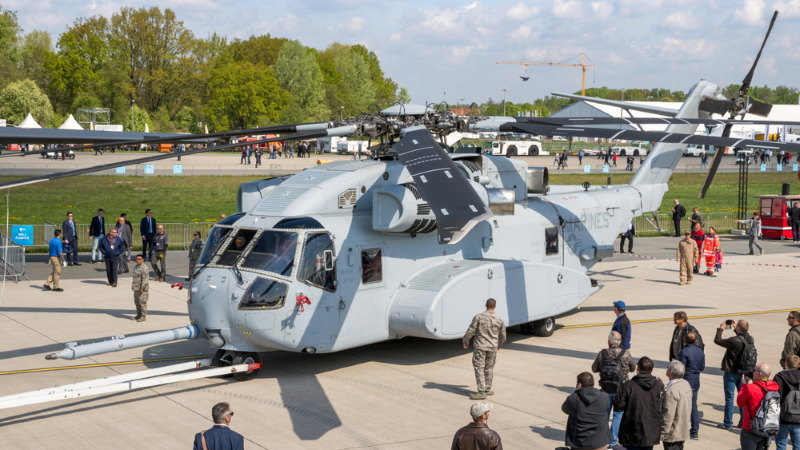 The CH-53K is designed to carry as much as 15,900 kilograms of cargo. It can take up to 55 troops. The device is 30.2 meters long and 8.46 meters high. When empty, the helicopter weighs 15,071 kilograms. This makes the CH-53K King Stallion the largest and heaviest helicopter in use in the United States military. 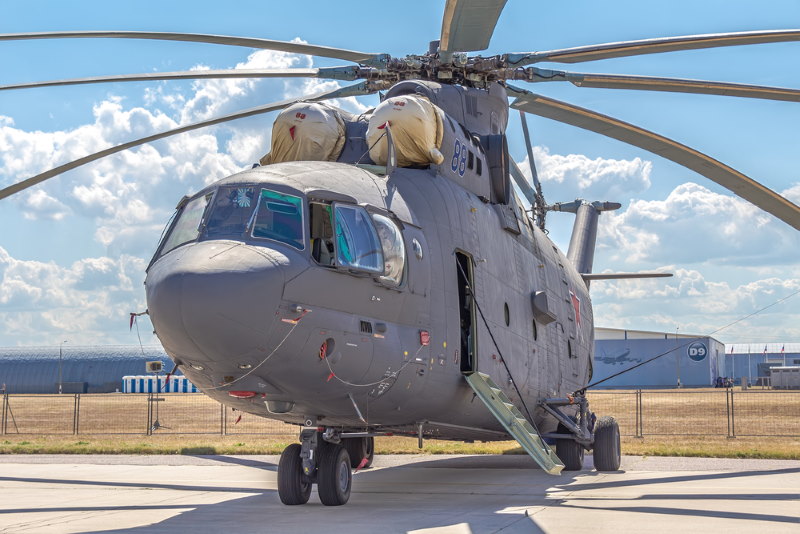 The heaviest and strongest helicopter in the world at the moment is the Russian Mil Mi-26. The then Soviet-Russian design agency Mil developed the Mi-26 in the 1970s. On December 14, 1977, the first prototype of the Mi-26 took to the air. 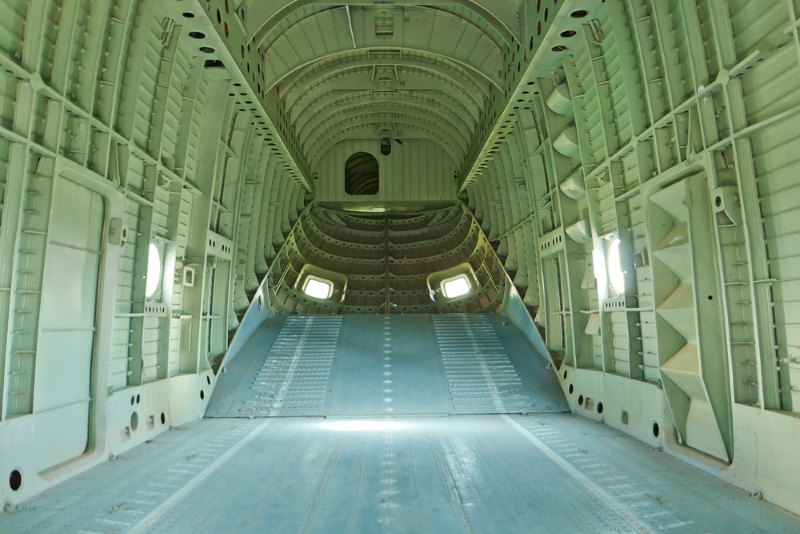 The Mi-26 primarily serves as a transport helicopter for transporting very heavy equipment to hard-to-reach areas. The hold of the Mi-26 can hold 90 fully equipped soldiers, but it can also hold a 20-ton container. The aircraft is able to take off with a maximum weight of 56 tons! 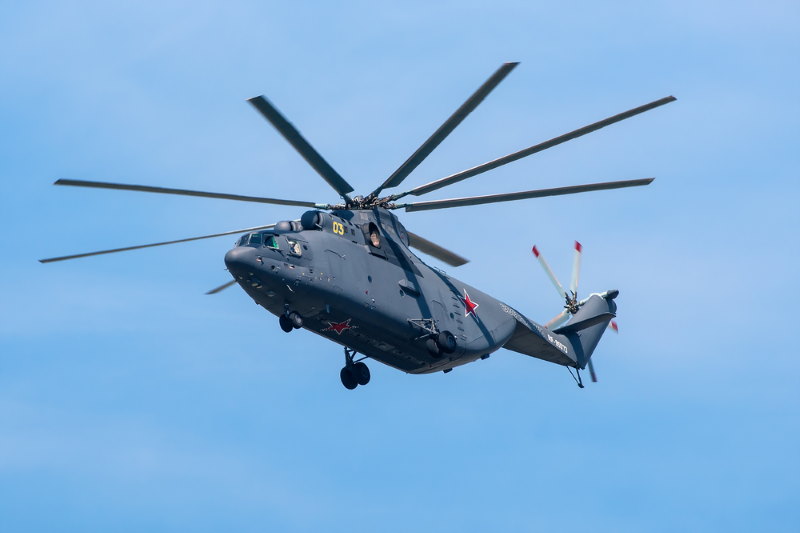 The dimensions of the Mi-26 speak for themselves: 40 meters long, 8.2 meters wide, 8.15 meters high. Empty, this gigantic helicopter weighs 28,200 kilograms. The diameter of the main rotor is 32 meters. The device is used by the Russian army, but many other countries also bought a number of devices.