It is seldom that we consider the size of countries, unless they are one extreme or another (largest or smallest) and it is often a surprise to realise that, for example Norway is bigger than Germany! The following is a rundown of the biggest countries in Europe, by area – read on and prepare for a few surprises!

The formal name of Italy is the Italian Republic and the capital city is Rome. The word Italy comes from italia, meaning ‘calf land’, a nod to the cattle owning tribes of the south. The country is heavily populated. While South Africa can boast of being a country which contains another country, Lesotho (as well as a good part of a second, Swaziland), Rome is unique in being a city which contains an entire country; namely the Vatican, the seat of the world-wide Roman Catholic faith. Italy is bursting with wonderful landscapes and scenery and offers exquisite cuisine – including those two perennial favourites pizza and ice cream! – along with some marvellous wines, a strong fashion industry and more artistic masterpieces per square mile than any other country in the world

Poland, more than any other country, has sent her sons and daughters widely all over the world of late, with over one third of the world’s Poles living abroad, in places as diverse as the United Kingdom, Canada and Australia. The name Poland comes from the word polanie which loosely means ‘people living in the fields’, a hint, perhaps of strong Romany ties, and an explanation for their global wanderlust? The people are somewhat battle-hardened having been invaded or fought off oppression a staggering 43 times in the last 400 years. The country has sometime struggled to survive, vanishing entirely between 1775 and 1795 when the country was ‘stolen’ and her land greedily divided between neighbouring, much more powerful, nations. Overall the populace is exceptionally well-educated, with 90% of adults having completed high school and an impressive 50% gaining an academic degree. The language is hideously difficult to learn as a second language, with 32 letters in the alphabet and some truly tongue tangling pronunciation required! However, Poland boasts a total of 17 Nobel Prizes (maybe no surprise there given the focus and excellence of the education), has more heroic citizens than any other country with over 6,000 citizens receiving commendation for saving people from the Nazis, has held more strongman titles than any other country, and birthed the likes of Marie Curie, Copernicus, Joseph Conrad, and Chopin! It seems that whatever Poland does, it does it exceptionally well! 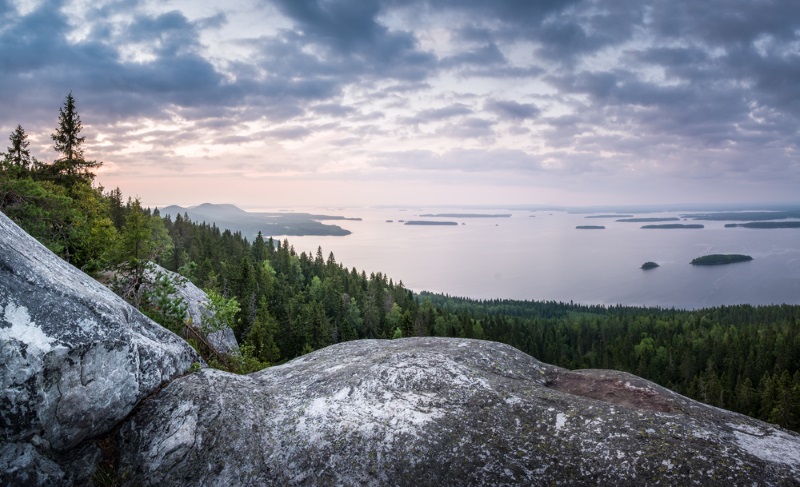 A surprise contender on this list, Finland is very sparsely populated with only 16 people per kilometre squared. It is easy to disregard the acreage held by the nation, especially when considering the total population! Finland is something of a baby country, only being an independent nation since 1918. Previously, it was always part of either Russia or Sweden. The people are prolific coffee drinkers, getting through 12kg each per year (or, for comparison, about four times what the British manage!) Your inner child will be delighted to discover that Santa lives in Finland! You can join the 700,000-odd people who correspond with him every year, by sending mail to ‘Santa Claus Village, FIN-96930, Arctic Circle’! Finland is highly regarded by humanitarian organisations, having an excellent reputation as regards press freedom and a refreshing lack of political corruption.

Germany is known as a beer-loving country, but perhaps not everyone is aware that beer is considered a food in the country! German consumption of the golden fluid is only topped by the Irish in Europe. As well as beer, you can find up to 300 different types of bread, and even several bread museums in the country. Sausages or wurst are also a national speciality and any visitor will be hard-pressed to try them all: there are reported to be over 1,000 different types of sausages in Germany! Germany is something of an innovator, keen to try new things and was the first nation to adopt Daylight Savings Time, back in 1915. There are no speed limits on 65% of the autobahn (German motorways) which makes them perfect for testing out your new motor –as long as you have great reflexes and good driving skills. The country is home to the world’s tallest cathedral in Ulm and also boasts the massive Cologne cathedral which took over 600 years to complete – to indicate something of its size, it can accommodate 40,000 people! Throughout Germany are around 150 castles, some of them dark and gloomy while others look as though a Disney movie has come to life and about 400 zoos – more than any other country in the world.

Norway suffers slightly from a highly conservative government who are reluctant to allow the country to progress and develop in case it puts too much pressure on the economy. Prices of commodities like groceries and fuel are high, with some Norwegians regularly travelling to neighbouring Sweden for their shopping. Norwegians are sometimes considered rude by foreign visitors who are unaware that it is considered quite strange to apologise for bumping into someone and equally weird to speak to or smile at a stranger! Norwegian pride was piqued when they won Eurovision in 1985 and they are very proud of the best-selling group A-ha. Norway is also the home of the paper-clip, with that so-useful device being invented in 1899 by Johan Vaaler! The word skiing comes from the Norwegian and the sport has its roots in this snowy land. Oddly enough, police stations in Norway are only open during office hours, and there is no emergency cover with callers receiving a message to call back during office times…

Sweden, the capital city of which is Stockholm, has the dubious honour of having more MacDonald’s per person than any other country in Europe! More elegantly, Sweden is also the venue for the prestigious annual Nobel Prize Ceremonies, and is the country of origin for the huge chains, IKEA and H&M. Amusingly enough, the country’s roads are well-signposted with moose-crossing warnings, and these signs are a popular and illicit souvenir, with hundreds being stolen every year! Sweden’s population is predominantly urban, with around 85% of the country’s 9 million people living in towns. Sweden was the first country to think of and create an ice hotel.

The word ispania, from whence the name Spain evolved, means ‘land of rabbits’ although scholars believe this to be a mistranslation for ‘border’ or ‘edge’ a reference to Spain’s geographical position on the edge of the Iberian Peninsula. It is the only European country to grow bananas and also produces 44% of the world’s olive oil, thanks to its warm and temperate climate. Spanish is the second most spoken language in the world and the country is home to the world’s most popular football club, Real Madrid which boasts a staggering 228 million supporters. Discoverer of America, Christopher Columbus was Spanish, but sadly, his burial place is lost to history. One custom to be aware of before eating in Spain, is that it is considered rude to leave any food on your plate, so don’t accept lots unless you are very hungry and sure to clean it up! The capital city, Madrid enjoys more sunny days than any other city in Europe making it a perfect winter getaway. Nudity is legal on Spain’s beaches, and many of them cater to naturists. Antoni Gaudi, the famed architect who seems to have single-handedly built vast neighbourhoods of Barcelona, and Salvador Dali (the artist who painted the melting clocks) are famous Spaniards. Children losing their milk teeth in Spain do not get rewarded by a tooth fairy; rather, the tooth mouse will call!

France is the most visited country in the world, with 75 million tourists arriving and departing every year, and therefore, much is known of the obvious attractions: the Eiffel Tower, the Louvre, romantic walks along chestnut-tree lined boulevards and romantic walks next to the Seine. But France has so much more to offer than these! Plenty of famous artists, from Monet, Renoir and Rodin came from France and museums and galleries are packed full of masterpieces old and new. The exciting and haunting melody, Bolero, was composed in France, by Maurice Ravel, and many other notable composers and musicians found their muse in the country. The whole country is packed with fabulous architecture, great wine and excellent food – even small roadside establishments offer food and drink that would require a two week waiting list in central London or New York! The capital of France was originally known as Lutetia in Roman times, but reverted to Paris by taking the name of the local Gallic settlement Parisii. This happened in 360AD, formalising a common nickname for the city at the time. Interestingly enough, French fries and French toast are not from France, and ‘French kiss’ is an English name for what the French call either a ‘tongue kiss’ or, more romantically, ‘a soul kiss’. French was always the international language of diplomacy and it is still the official language of the UN. French is taught widely all over the world, being second only to English as the most commonly taught second language in schools. France is home to over 400 types of cheese, and is also known for its fashion industry, as well as the perfume centre of the world. Quirkily, it is illegal to name a pig in France and the country’s oldest bridge, ‘Pont Neuf’, means new bridge!

No trip to the Ukraine can be considered complete without visiting the geographic centre of Europe, a point proudly displayed with a marker. While travelling through this immense country, listen to Gershwin’s ‘Summertime’, which was inspired by a Ukrainian folksong. Ukraine is also proud to claim that ‘O Sole Mio’, that most moving song, immortalised by the late Luciano Pavarotti, was written in the Ukraine. The country is home to the world’s deepest subway which descends over 100 metres; not a fact to be considered by travellers who suffer from claustrophobia! The country is home to the world’s largest reserves of manganese ore, and prides itself on its education system. The Klitschko brothers, who are both boxers and could therefore be forgiven for barely being able to read and write, both have university degrees – at PhD level!

Russia is the world’s largest country as a whole, spreading spreads across Europe and extensively across Asia. Even the portion of the country that is in Europe is still the largest country in Europe, and that is less than one fifth of the entire acreage of the nation! The whole country is estimated to cover one seventh of the world’s total land area. There are more billionaires in the capital city, Moscow, than anywhere else in the world. At 74, Moscow has 3 more billionaires than New York City! Russia was responsible for putting the first man in space, Yuri Gagarin. Moscow is home to one of the largest branches of Macdonald’s in the world, seating an incredible 700 diners, a size only matched by Beijing. Russia borders onto fifteen other countries, more than any other in the world and her forests are second only to those found in the Amazon. This latter fact has seen Russia garner the nickname ‘the lungs of Europe’ because of the impressive absorption of carbon dioxide undertaken by the immense expanse of greenery. It was a Russian chemist, Mendeleev, who laid out the known elements into the form currently used today, the periodic table. Russians are a very hospitable people and will always offer some refreshment to guests – to not do so is a serious breach of good manners! The addictive game Tetris was invented by a Russian. Be sure to take in a visit to the ballet while in Russia; you will never forget the beauty and skill of the dancers!