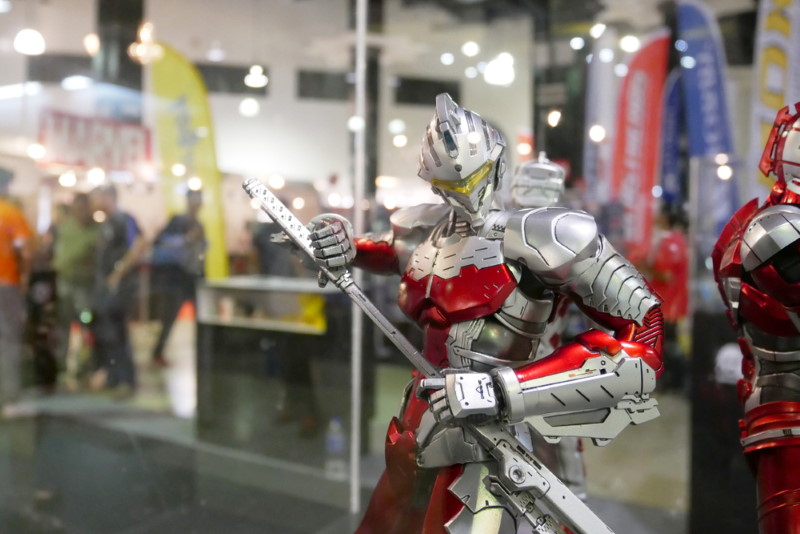 When we think about superheroes, Batman, Superman or one of the other mainstream crusaders instantly spring to mind. While these caped crusaders are all well and good and have had an undeniably huge impact on our culture, Japan has a whole varied heap of awesome, ass-kicking vigilantes who can rival even the best of our western counterparts.

Honey was originally created as a replacement goldfish for a scientist’s dead daughter until the criminal organization, ‘Panther Claw’, kills her father/creator while trying to steal his research. It is only then that the 16-year-old discovers she is an android girl who can transform. Honey’s main power is the Phlebotinum – her father’s breakthrough invention he was killed for – which allows her to assemble virtually any object from thin air. She uses her ability to become a voluntary shapeshifter, capable of switching between several forms with matching abilities, costumes and hair. Her most powerful form is the sword-wielding, busty, red-haired heroine Cutie Honey, who fights against the assorted villains that threaten her or her world. Despite its status as a legendary and influential anime in Japan, ‘Cutie Honey’ is almost entirely unknown outside of the country. A lot of other shows owe much to this original series, but that sadly wasn’t enough to save the show from getting cancelled over its racy content.

Tekkaman is set in the distant future of the 21st century where the Earth is polluted and nearly depleted of resources. Mankind is forced to find a new home which they dub ‘Second Earth’, but just as they are set to launch the mission, the evil alien alliance known as the Waldastar attack to impede their efforts. After his father is killed in the first Waldastar attack, Jouji Minami hijacks the highly advanced robot Pegas. Using the robot’s built in “Tek-Set” system, he transforms into the armored Space Knight, Tekkaman. Together with his girlfriend Hiromi and the mysterious Andro Umeda, the three of them search for a new world while fending off the Waldarian menace. The original series was short lived, only spanning 6 months, but it was followed almost two decades later by the more successful ‘Tekkaman Blade’ which follows a similar storyline.

This series tells the story of young hot-blooded idiot hero, Kouji Kabuto, grandson of a genius professor. The Professor secretly built a Mecha named Mazinger Z to battle the forces of evil, led by his rival-gone-mad, Dr. Hell. This enormous super robot was constructed entirely with a fictitious metal called Super-Alloy Z, which is forged from a new element (Japanium) mined from a reservoir found only in the sediment of Mt. Fuji. Unfortunately, the professor is assassinated, but he still manages to inform Kouji about his creation. He asks him to take over but warns that he could become “a God or a Devil” with its power. This iconic show did something right; with all the spin off series, adaptations and manga issues, the franchise managed to span 4 decades since first appearing in 1972.

Ken the eagle, Joe the condor, Jun the swan, Jinpei the sparrow and Ryu the owl are the five young superhero in bird suits who use ninja-type weapons and are employed by the International Science Organization to oppose a terrorist organization of technologically advanced villains (known as Galactor) who are trying to control Earth’s natural resources. The leader of Galactor, an androgynous, masked antagonist named Berg Kattse, turns out to be a shape-shifting, mutant hermaphrodite, acting on the orders of an alien superior. ‘Gatchaman’ was, in fact, the very first place that the concepts of the five-man band (hero, cool guy, token female, precocious kid and big guy with a hick accent) and ‘combining Mechas’ intersected, which a lot of our other superheroes were inspired by. Unfortunately the series only lasted for 2 years, but in that time it gathered a huge following, aired over 100 episodes, a movie and a few spin off series.

Also known in Japan by its original name ‘Mighty Atom’, ‘Astro Boy’ takes place in a future where robots and humans peacefully co-exist side by side. Built originally by Dr Tenma to replace his dead son Tobio, Astro is sold to the circus when the doctor realises he can never fill the void his child had left. It isn’t long before the boy robot is saved by the new Head of Science who discovers his true potential to fight crime and evil. Equipped with state of the art tech (he has 100K horsepower strength, jet flight, high intensity lights in his eyes, adjustable hearing, instant language translation, a retractable machine gun in his hips and a high IQ capable of determining if a person is good or evil) and able to express human emotions, this multifunctional android was a hit when the manga series first hit shelves in 1952. Astro Boy has continued to put a stop to robot-hating humans, robots gone berserk and alien invaders ever since.

The ‘Metal Hero’ series follows the androids, cyborgs and humans who don metallic suits referred to as the ‘Henshin (transforming) Heroes’. The Space Sheriffs are the enforcers of peace and justice sent by the Galactic Union Police. First airing in 1982, the show continued for over a decade before it came to a close in 1999. It accomplished massive international fame and even spread to countries like France, Brazil, the Philippines, Malaysia, Indonesia and had a spin off series in the United States.

‘Sailor Moon’ follows Usagi and her cat guardian as they go in search of the Moon Princess and legendary silver moon crystal. To help fight against the negative forces they are inevitably bound to face, Usagi is granted the ability to transform into the titular character, Sailor Moon. Along the way she recruits a team of teenage girls who fight alongside her as Sailor Scouts (Sailor Guardians in later accounts) each named after a different planet in the solar system. It isn’t long before the girls discover that Usagi has actually been the reincarnation of the Moon Princess all along. With a huge following worldwide, Sailor Moon and the Scouts are by far the most popular animated all female heroine team with many movie adaptations and even a reboot season which aired in 2014. Seem like these girls just can’t stay away.

One of the many Japanese superhero series to have more than one team spanning across dozens of seasons and movies, ‘Super Sentai’ has proven to be a huge hit in the western culture where they are better known as ‘Power Rangers’. Every television series of the same name is basically a fight between good and evil. The protagonists are a team of five people who gain superpowers (either magical or technological), wear color-coded uniforms and use advanced weapons and martial arts skills to battle the bad guys threatening to take over the Earth. In most of the episodes, the ensuing conflict ends with enlarged versions of the monsters appearing to defeat the team, only to be defeated when the heroes call for huge robotic vehicle animals, or ‘Mechas’, that can combine to form one or giant robot to fight. These heroes have been responsible for over 34 series and the production of millions of action figures around the world.

This series takes place in a world plagued by Shocker, a mysterious terrorist organization. To further its plans for world domination, they recruit their agents through kidnapping, turning their victims into mutant cyborgs and, ultimately, brainwashing them. However, one victim named Takeshi Hongo escapes before the final brainwashing. With his sanity and moral conscience intact, Hongo battled Shocker’s minions as the grasshopper-themed altered human superhero Kamen Rider. First airing in 1971, this show has spanned three series and landed three adaptations outside of Japan including a show in the United States. Though each of these series has its own hero, the various Kamen Rider media generally feature a motorcycle-riding superhero with an insect motif who fights supervillains often referred to as Kaijin. This has resulted in there being over 100 different riders, all of whom had such a cultural impact on the Japanese that the astronomer Akimasa Nakamura named two minor planets in honour of the series.

Starring in over 20 series and over 20 movies, it’s no wonder ‘Ultraman’ takes the number one spot. Not to be confused with Superman’s evil counterpart from DC comics, Ultraman isn’t just one superhero but is a whole team known as the Ultra Crusaders. These super humanoid beings from outer space protect Earth from giant monsters and aliens alike. The only downfall to these solar powered heroes is that they can only stay on Earth for a maximum of 5 minutes before they need to return to space to recharge. The first Ultraman, also known as Original Ultraman or Ultraman Hayata, first appeared in 1966 and helped save Earth for several years before he was recalled. These alien-human hybrids have captured the heart of not just the Japanese, but have even gathered a huge Western following as well.