When visiting any statue, it is always the sheer scale of the object, which really impresses. There is the will to construct a monument to honour someone, but to make sure that it will be seen for miles around. Some of the world’s most famous statues are a great reference point, when trying to comprehend the vast scale of these monuments. In Brazil, Christ the Redeemer is only 98.5 feet tall and the Statue of Liberty in New York is only 151 feet. 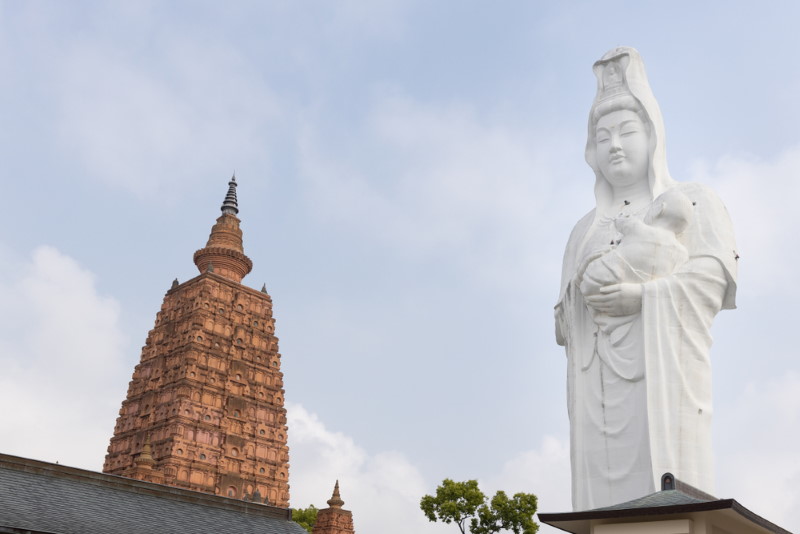 The Awaji Kannon, also known as the Kan’onji Peace Statue, is a statue, a museum and a temple in the city of Kan’onji in Japan. The statue was completed in 1991; the 100-meter statue was the tallest in the world. But bad management and many problems have reduced the whole to ruin, the bankrupt building has been closed and abandoned since 2006. 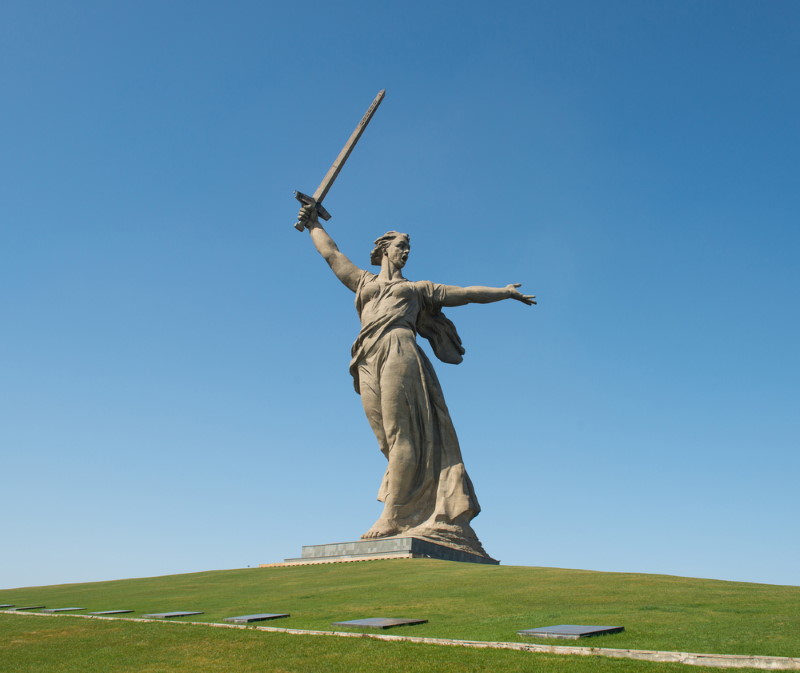 The Rodina-Mat’ Zovyot statue was completed in 1967. At that moment it was the tallest statue in the world, with a total height of 85 meters, measured from the top of the sword to the base of the statue. The statue itself is 52 meters high, and the sword sticks out for another 33 meters. This sword was originally made of stainless steel, but it turned out to be too heavy. Due to its weight, the sword put too much force on the statue in strong winds. That is why the sword was replaced in 1972.
Two hundred footsteps, which symbolize the two hundred days that the battle of Stalingrad lasted, lead from the foot of the hill to the statue.

Starting off in Japan, the statue of Byakue Kannon in Ashibetsu, Hokkaidō is the oldest on the list and when it was built in 1989 was the world’s highest statue. Raising up to 289 feet, the pure white statue is a foreboding sight in it’s naturally wooden surroundings. 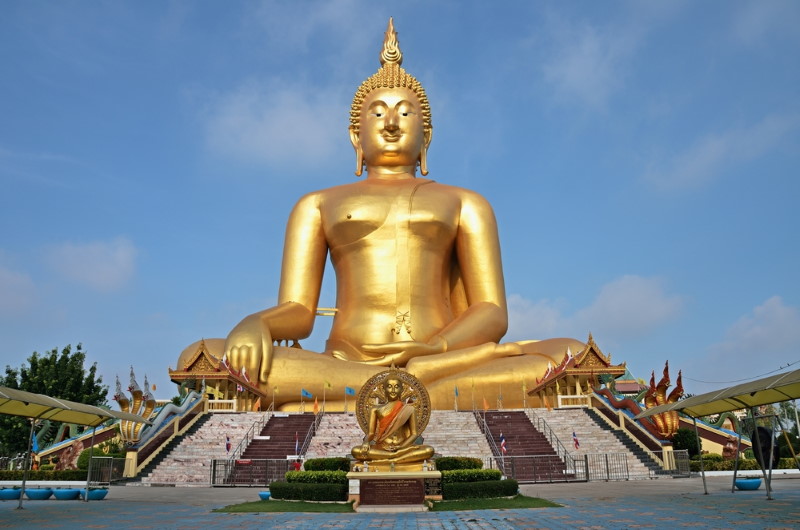 Known locally and to tourists as ‘The Big Buddha‘, this statue sits at a height of 302 feet and took 18 years to complete. The statue is made of cement and painted in gold, it was hand shaped to accurately depict an image of Guatama Buddha. To say that the statue sits in Thailand, is due in part to the seated position of Buddha and the fact that it is 260 feet wide. 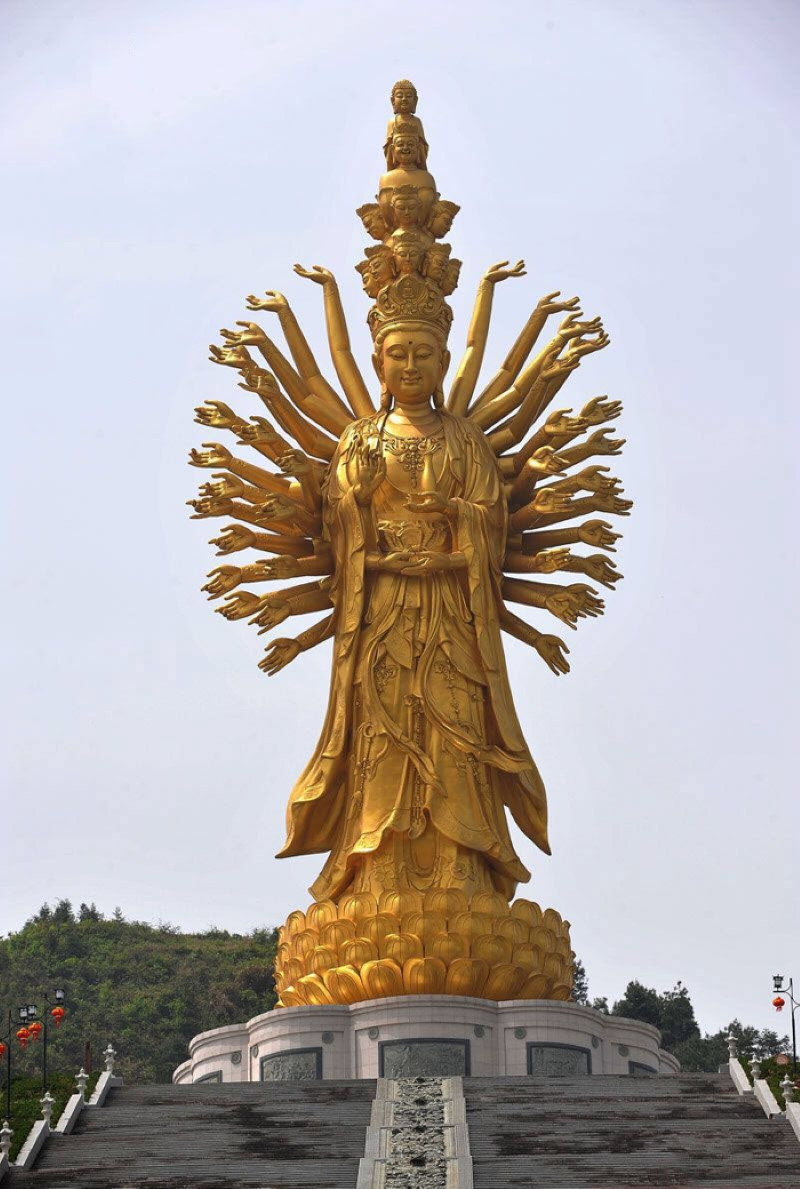 Whilst the Qianshou Qianyan Guanyin of Weishan statue is the fourth tallest in China, it only reaches seventh on the world list. Raising up to a height of 325 feet and depicting Guanyin with her arms displayed for all to see. Built in 2009 in the Hunan province, this gilded bronze statue is one of the top local tourist attractions. Her seemingly endless amount of arms are displayed like the wings of a butterfly, welcoming to all and yet offer a peaceful overtone. 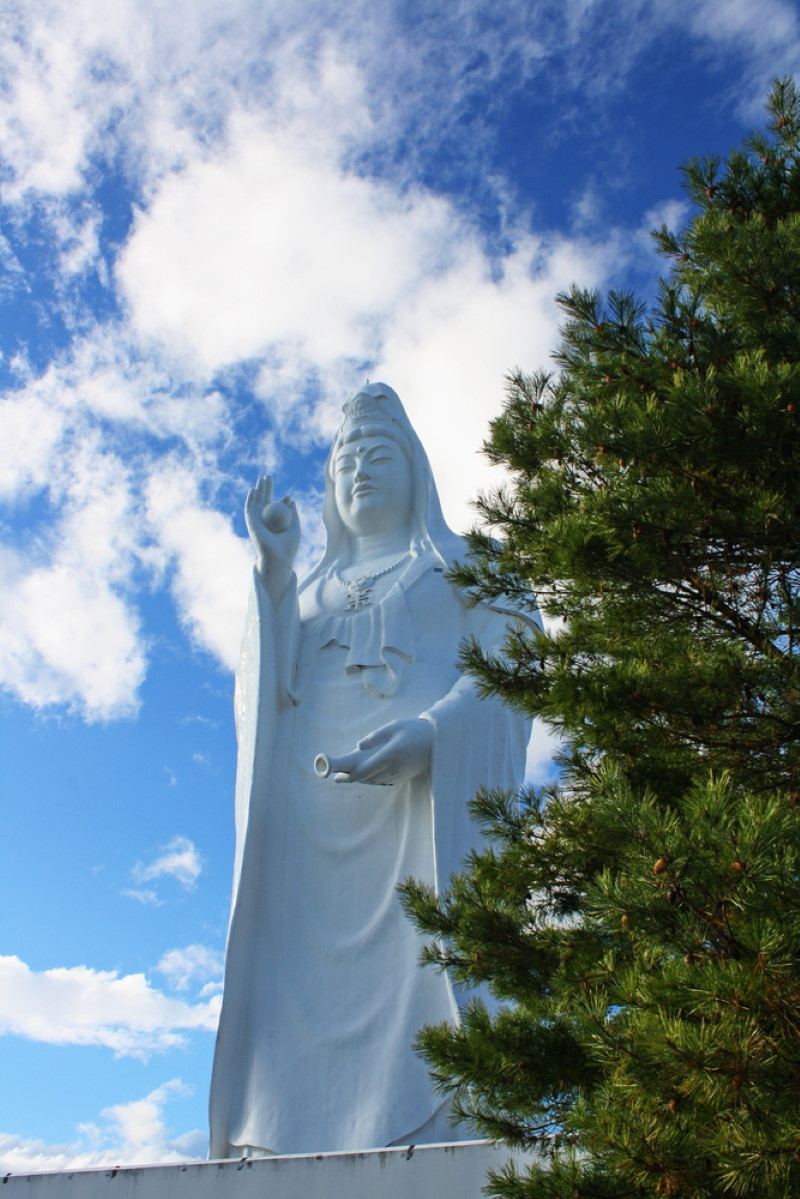 Japan features once again on this list and it is with a 330 foot statue depicting Kannon. When the statue was built in 1991, it’s designers decided to finish it off in a perfect white to ensure that it symbolically resembled both purity and calm. The Sendai Daikannon is situated in a park of outstanding natural beauty and manages to take full advantage of this, with a lift to the top to afford all guests a stunning view. 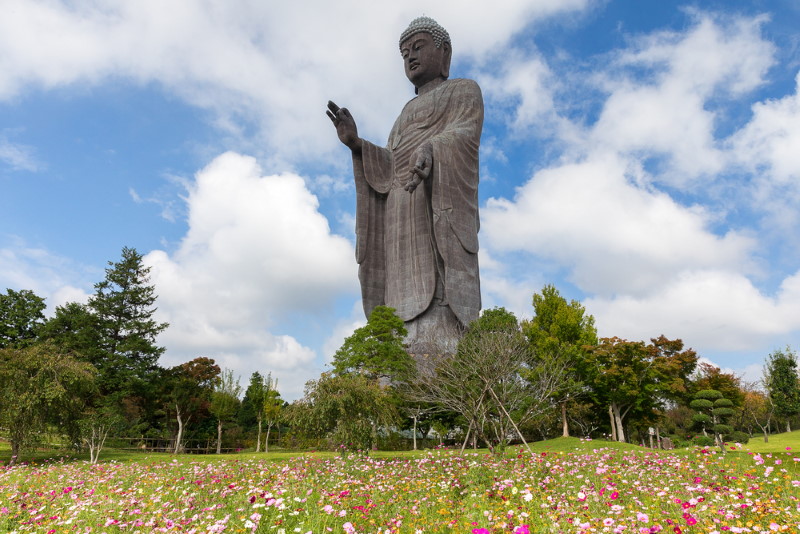 Japan’s tallest statue is the collosus Ushiku Daibutsu. Reigning over the Ushiku, Ibaraki Prefecture at 360 feet tall. When the statue was built in 1993, it was the world’s tallest staute. This was thanks in part to the 33 feet tall lotus throne that Amitabha Buddha is standing on, which made it 27 feet taller than the existing Sendai Daikannon statue.
The statue itself houses a four story museum and observation deck, explaining the story of the statue’s building and the history of Amitabha Buddha. 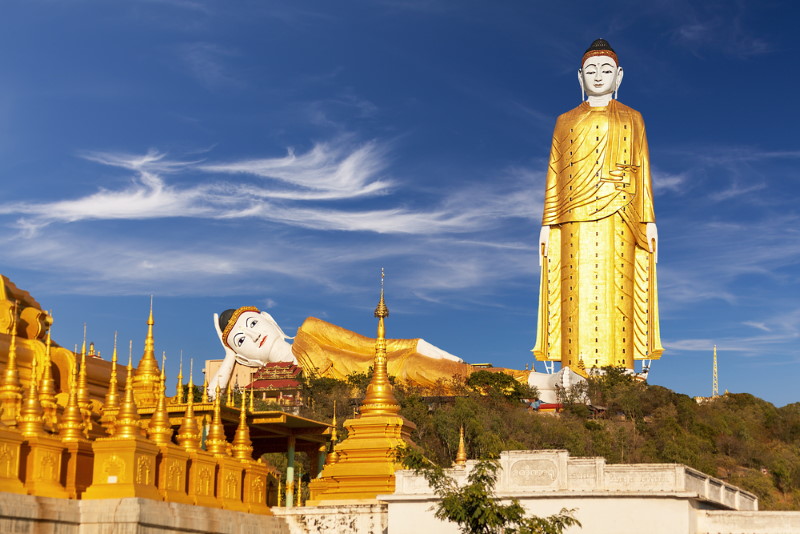 The Laykyun Setkyar statue is comprised of two different statues, a standing Buddha and a laying down Buddha. Both are equally impressive measuring 381 feet long or tall. The standing Laykyun Setkyar Buddha is depicted standing atop a 44 foot tall throne. When construction started in 1996, the village of Khatakan Taung in Burma could not foresee all the changes it was about to experience. However, 12 years later, when the statue was completed, the village became one of Burma’s top tourist spots. 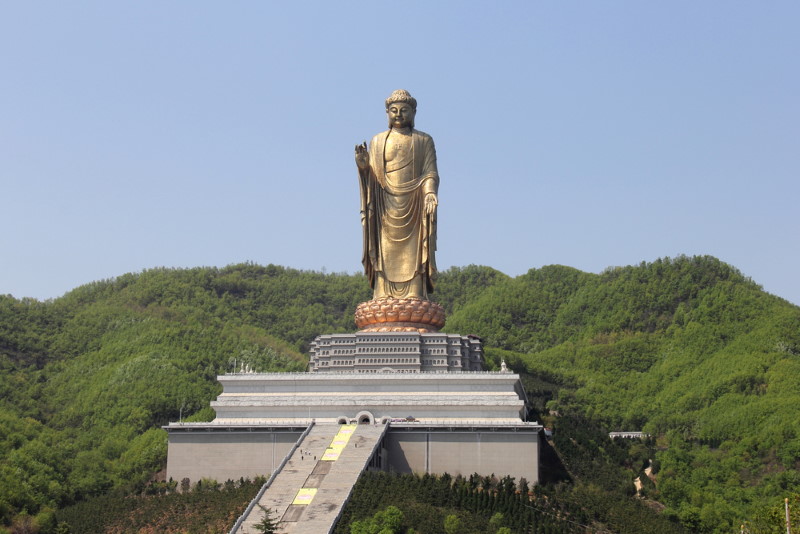 Fittingly, the world’s tallest statue continues the theme of the top 10. The Sprint Temple Buddha was built in 2002 and is 420 feet tall. The world’s tallest statue was a stated aim when the Chinese announced a $55 million project, to build a statue to replace the destroyed Bamiyan Buddhas. The massive statue depicts Vairocana Buddha, stood atop a 66 foot lotus throne, which is built on an 82 foot pedestal.
The Sprint Temple Buddha is more than four-times as tall as the statue of Christ the Redeemer in Brazil and nearly three-times as tall as the Statue of Liberty. The scale of the monument is an indication of the love and esteem that the Chinese population hold their Buddha in. 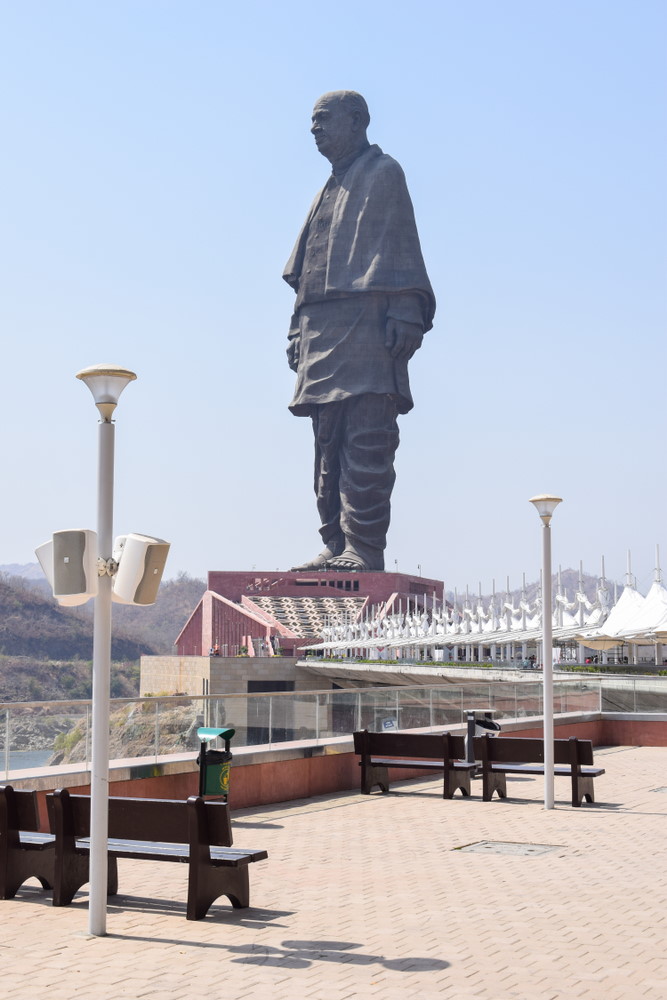 By late 2018, a 600-foot steel and bronze statue of the 17th-century Hindu warrior Shivaji should be towering over Mumbai from an artificial island. It wil be the tallest statue in the world! Critics denounce it as extravagant in the face of the poverty around it, but supporters argue that its prestige is needed. Will Shivaji agree as he gazes down on the teeming streets?

Top 10 Largest Mosques in the World