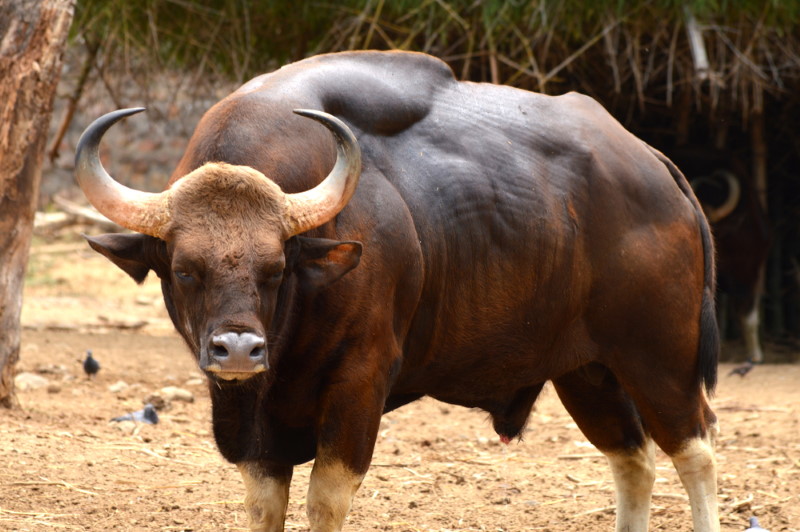 The guar, or Indian bison, is found in South Asia and Southeast Asia. The tallest species of wild cattle, the guar is heavy and strong with long curved horns common to both males and females, and large ears. A prominent bony ridge stretches along the back from the shoulders. The male colouring is dark brown to black whilst females and juveniles are much paler. Guar habitat is mostly evergreen forests and areas with a moist deciduous and semi-evergreen forest mix. Though they rarely bathe or wallow, optimal environments are low-lying hilly tracts with water and a rich array of forage consisting of shrubs, trees, grasses and bamboo.
These usually timid and shy creatures are diurnal by nature, though they quickly become predominantly nocturnal after human disturbance. Given their power and size, guar have scarcely any predators beyond tigers and (saltwater) crocodiles. 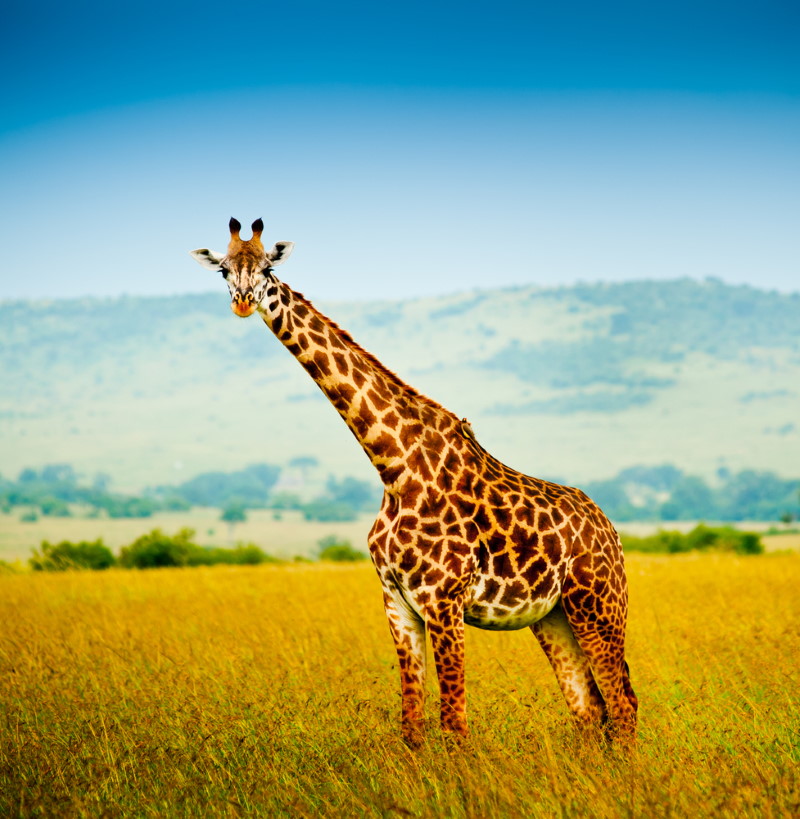 Amongst the very tallest of animals, the giraffe has long legs and high shoulders sloping steeply down towards the hindquarters. Though its distinctive extended neck has the same number of vertebrae as most other mammals, these are considerably larger on the giraffe and feature connecting joints for greater flexibility. The giraffe’s characteristic ‘leopard’ colouring of brown blotches against a buff background acts as a camouflage whilst browsing on tree foliage. These patterns and colouration vary in giraffe subspecies. On the head, male giraffes have a pair of bony ‘horns’ covered in thick skin and usually bald at the tip due to the wear and tear of fighting. Female horns are thinner and more tufted. In addition to horns, mature males develop heavy skulls with calcium deposits adding extra bumps. During fights, dominant animals deliver fierce blows with these club-like skulls. 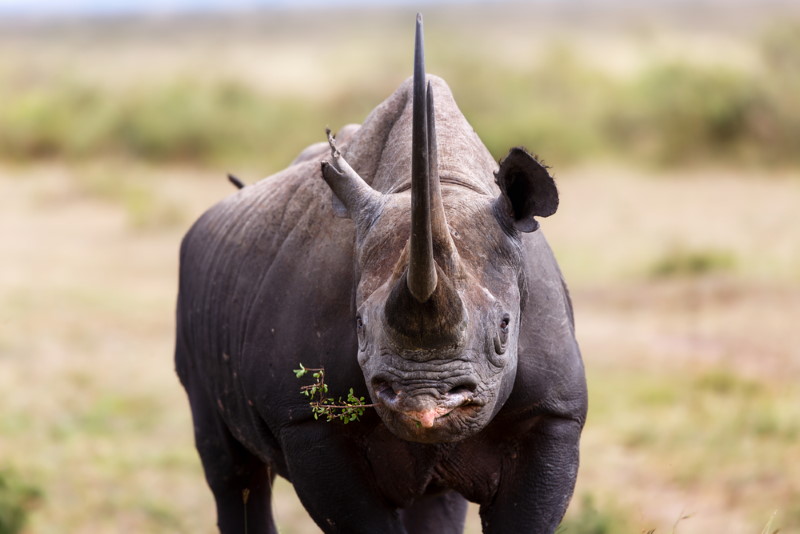 The black rhino is actually gray in colour. It has a prominent pointed upper lip used to rip fruit and leaves when browsing on bushes and trees. Black rhinos are nocturnal feeders, though this also includes the twilight times at dusk and before dawn. By day, they find cover in the shade or wallow in a suitable water hole, thoroughly coating their skin with mud as a sun block and natural insect repellent.
Black rhinos have two horns. These grow by up to 8cm per year, and the foremost horn, which is larger, can extend to as much as 1.5 metres. Rhino horn is a very saleable commodity and many animals have been culled simply to recover this tough keratin growth. The black rhino was once common throughout sub-Saharan Africa, but numbers have sharply declined due to poaching. 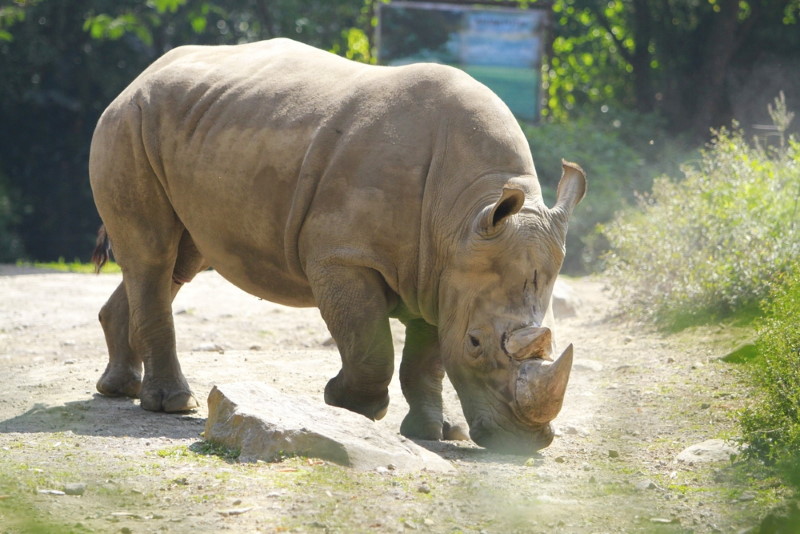 With a surviving population of less than 100, the Javan rhino is a rare rhino species. Once widely spread across Southeast Asia and Northern India, numbers declined due to poaching and loss of habitat. Two national parks now shelter the remaining animals: 40 – 60 rhinos on the island of Java, and 10 – 15 rhinos in Vietnam.
Javan rhinos flourish in dense lowland tropical rainforest where water and mud wallows are plentiful, with a few sightings recorded in rainforest locations above 1,000 metres.
The Javan rhinoceros is grey to grey-brown in colour and has a single horn. Its skin hangs in several loose folds giving a rather armour-plated look. Some recent research suggests that horns may be an exclusively male feature. Javan rhinos feed on foliage and fallen fruit taken from shrubland vegetation, supplemented by occasional grazing. 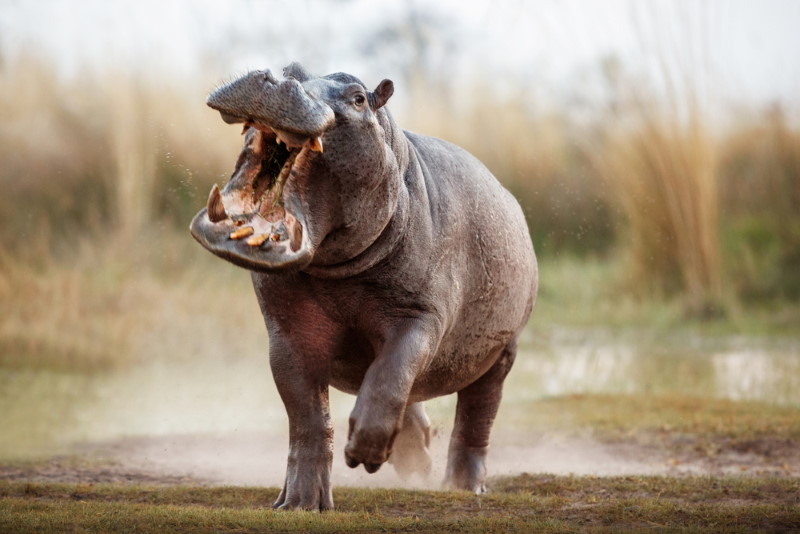 Known to the Greeks as the ‘river horse’, the hippopotamus is truly at home in aquatic environments, spending most of the day keeping cool whilst submerged in lakes and rivers, only occasionally emerging to bask at the waterside. Hippos are strong swimmers and can remain underwater for several minutes. Their large size often allows them to walk along riverbeds or otherwise wallow in the shallows. With both eyes and nostrils set high on their heads, hippos are well-adapted for vision and breathing even when almost fully immersed.
Hippos leave the water as night falls and move inland to graze, often travelling up to 10 km and consuming 35 kg of grass. If disturbed on land, hippos quickly return to the water.
Though once widespread, most hippo populations are now located in southern sub-Saharan Africa and central East Africa. 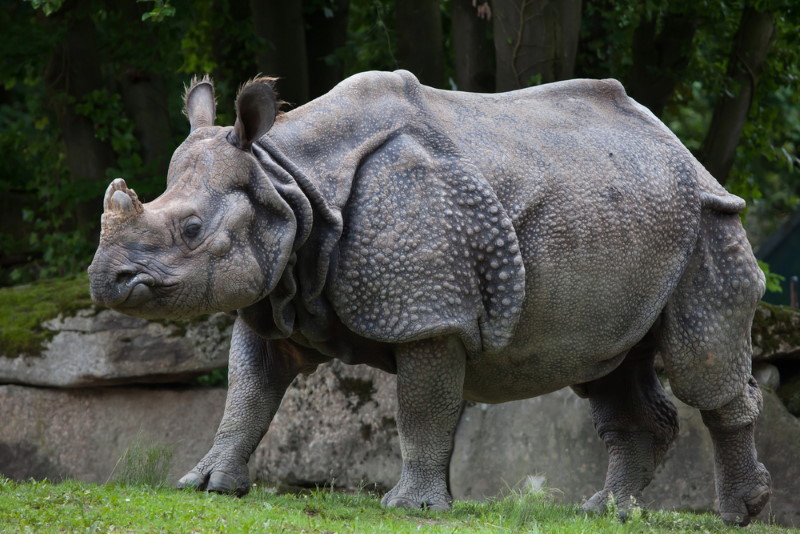 The Indian rhinoceros, a native of Nepal and northern India, has one single horn as the Latin descriptor, ‘unicornis’, implies. Its thick silver-brown skin, which resembles a suit of armour, consists of hide ‘plates’ interspersed with softer skin to facilitate flexibility of movement. Thus, despite their size and look, Indian rhinos are remarkably agile.
Living in riverine tall-grass habitats, the Indian rhino uses its tough ‘gripping’ lip to seize and eat grassy stems. Leaves, fruit and aquatic plants are also consumed, together with occasional cultivated crops. Foraging is usually confined to early morning and late afternoon, with midday spent immersed in water or wallowing in mud.
As with other rhino species, they have suffered from poachers seeking to profit from their valuable rhino horn. Consequently, the Indian rhino feral population is down to around 2,000 animals. 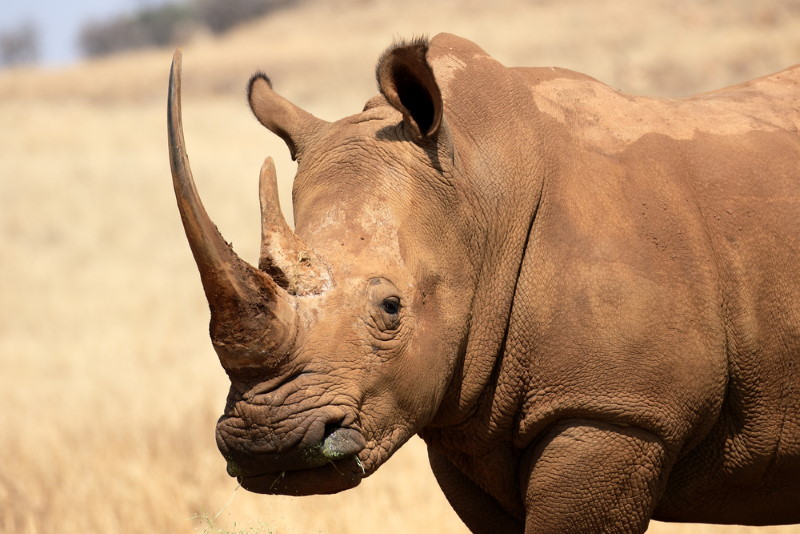 The white rhino is actually greyish in colour. It has a huge head and squared lips well-adapted to close grazing African grasslands. On the hot plains, white rhinos live in small groups, finding shady areas close to waterholes where they can escape the midday sun and wallow in the mud, whilst gaining a protective sunscreen and insect-repellent coating. With their acute hearing and highly developed sense of smell, white rhinos are adept trackers, locating other members of their group by following scent trails.
White rhinos have two horns on their forehead. Each grows up to 8cm a year. The foremost horn, which is larger, can grow up to 1.5 metres. Rhino horn is valuable and many animals have fallen to poachers. White rhinos once inhabited most of sub-Saharan Africa, but poaching has reduced this wild population to around 11,000. 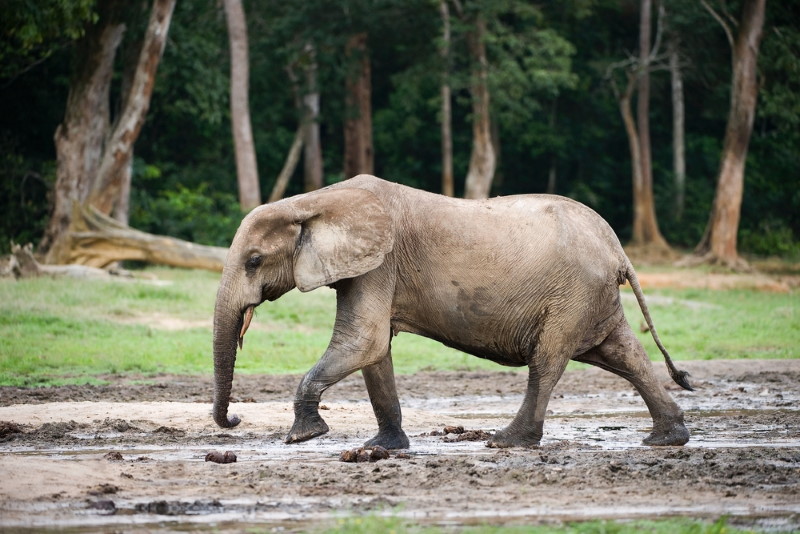 Long regarded as an African elephant subspecies, the African forest elephant has now achieved full status as a separate species. When compared with the savannah elephant, it is smaller in size with straight, downward-pointing tusks and rounded ears – unlike the more pointed ears of the savannah. In addition, the forest elephant has five toenails on the fore foot plus four on its hind foot, a characteristic shared with the Asian elephant; whilst the savannah elephant has four and three on the fore foot and hind foot respectively.
The forest elephant enjoys an herbivorous diet of tree bark, leaves, and plenty of fruit, also seeking out mineral and salt licks as a supplement. Within their own ecosystems, forest elephants promote biodiversity through their feeding habits which disperse plant materials around the tropical forests of the Congo Basin. 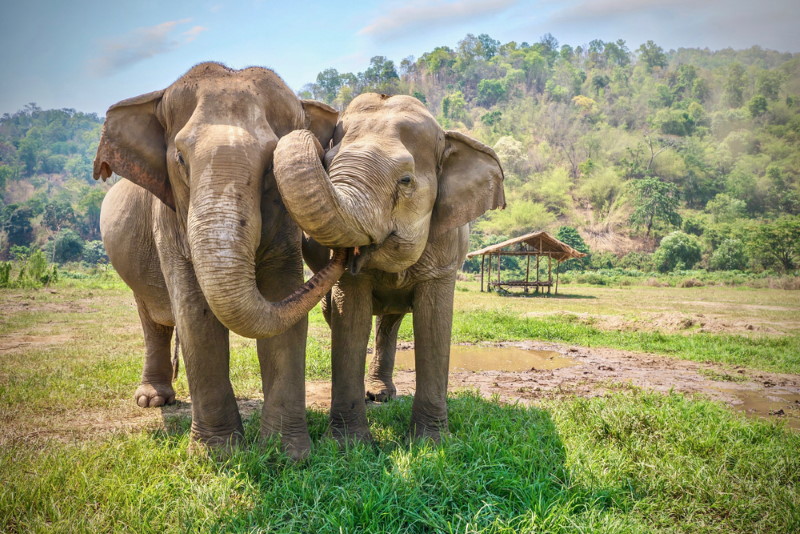 The Asian elephant is smaller in size than its African counterpart and has distinctively rounded ears. These help cool the elephant by radiating heat. Cooling is also achieved by immersion in water where elephants commonly spray themselves using water sucked through their trunks. Primarily a long multi-function nose, a trunk is used for drinking, breathing, smelling and trumpeting. Asian elephants also have a finger at the tip of the trunk to aid fine gripping tasks. They use their ivory tusks to strip bark, uncover roots, dig for water, and to fight if the need arises.
With adults consuming around 136 kg of food on a daily basis, hungry elephants trek long distances foraging for the bark, roots, fruit and grasses their diet requires, leaving them little time to rest and sleep.
Though adult elephants lack predators, ivory poachers remain a threat. 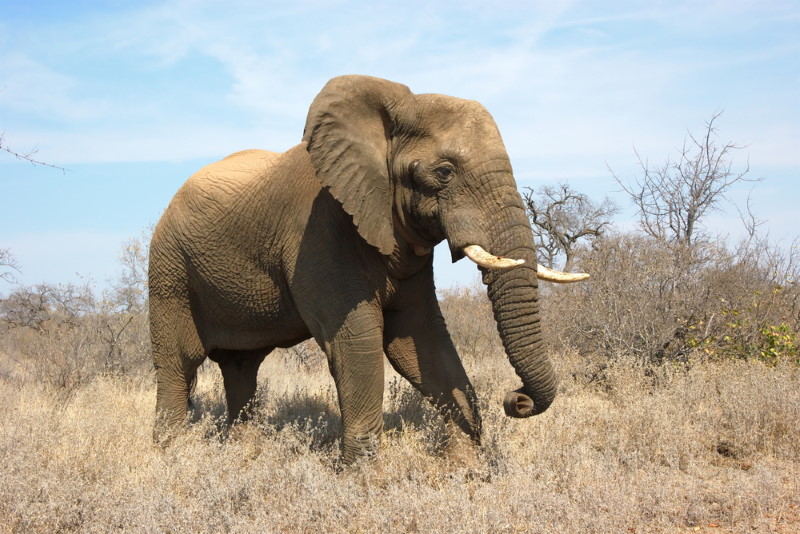 African elephants are Earth’s largest terrestrial animals. Bigger than their Asian relatives, African elephants are easily distinguished by their larger ears (shaped like the African continent). For elephants, ears are a vital cooling device for discharging body heat. Water also plays a cooling role as elephants soak themselves by spraying water from their trunk, frequently following up with a protective dust spray.
With 100,000 individual muscles, an elephant’s trunk is a multi-function organ for breathing, drinking, trumpeting, and smelling. In addition, African elephants have two ‘fingers’ at the very tip for tasks requiring a finer grip. Ivory tusks are used to excavate roots, strip tree-bark, dig for underground water, and to serve as weaponry, if required. Existing on a diet of fruit, grasses, roots, and bark, elephants journey long distances to gather their daily food intake of 136 kg.

The heaviest animals on the earth are all marine mammals, you can find the top 10 here