The 90s was an undisputably great time to be a kid who loved cartoons. Networks like Nickelodeon, Cartoon Network and the Disney Channel really hit their stride with their creative output, and they produced some truly unique and special cartoons which are still looked back on with fondness and appreciation. A generation of children rushed home from school or got up early on Saturday mornings to sit in front of the TV to make sure that they caught up with some of these top cartoons from the decade. 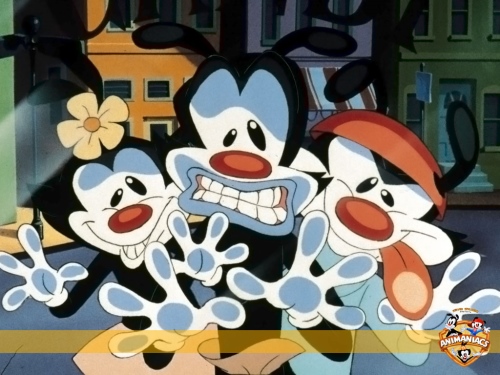 The aptly-titled Animaniacs was an anarchic, frenzied anthology show which showed how off the wall and inventive cartoons could be. Animaniacs was a variety show with the attention span of young children in mind, and its sketches, skits and mini-shows (like Slappy Squirrel and Pinky & the Brain) came thick and fast. Smart, fast and very funny, the Animaniacs could perk up any 90s kid in less than 20 minutes. 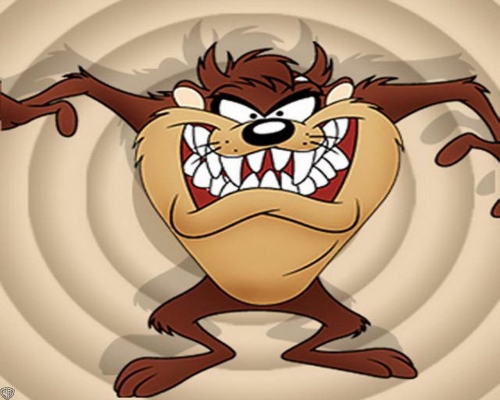 The Tasmanian Devil was definitely one of the unlikeliest cartoon characters to break out and become a pop culture icon. So much so that his likeness, for some reason or another, became a strangely popular choice of tattoo for many people. The Tasmanian Devil, or Taz, was originally created as a new character by Warner Bros. for its Looney Tunes line-up, by he only made a few brief appearances in various cartoons, shorts and movies until he got his own TV show in the early 90s. Like most great 90s cartoons, Taz-Mania had a catchy theme tune which perfectly encapsulated the weird, slapstick tone of the show. Taz was a ferocious creature who grunted and snarled instead of talking (although he spoke perfectly fine English when he, along with other characters, broke the fourth wall and spoke directly to the audience) and often spun himself into a whirlwind when he was angry or when he just wanted to get somewhere quickly. The show had a pretty weird cast of characters which included Taz’s family and other creatures from Tasmania such as dingoes, crocodiles, wallabies and koalas, but other members of the Looney Tunes line-up often popped up to partake in hijinx. 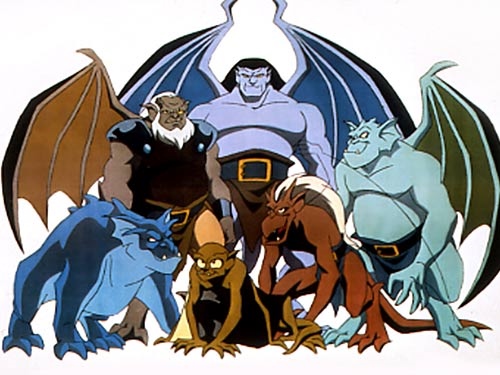 Gargoyles was completely unlike any other cartoon from the 90s. While some other shows skirted into adult territory by approaching more mature themes and storylines or by telling risque jokes that they hoped went over the heads of most of their intended audience, Gargoyles was just flatout dark. Steeped in mythology and at times Shakespearean in its melancholy and melodrama, the show was always suitable for a younger audience (the premise after all is pretty cool: a bunch of gargoyle statues come to life at night and serve as protectors of New York City) but it never shied away from challenging themes and storylines. It also arguably had the best cast of any cartoon with talented actors like Keith David, Ed Asner and Tim Curry lending their voice talents to the show.

Some of the best cartoons have such weird concepts and premises that it basically allows them to do anything they like. Dexter’s Laboratory was one of those shows. Focusing on a boy genius with a underground liar who is trying to keep his inventions and secrets away from his family (particularly his hyperactive sister Dee Dee) while also competing with a rival young evil genius called Mandark, Dexter’s Laboratory was a weird, creative fun house of a show.

Johnny Bravo is the epitome of the loveable goofball. He looks and acts like a ladies man but he always gets shot down, he’s vain and muscled but his bulging belly always sticks out, and his sleek pompadour hair, cool sunglasses and rapidfire catchphrases can’t hide the fact that he is dimwitted and stupid. Although he’s always the butt of the joke and is constantly rejected and scorned (sometimes assaulted) by women, Johnny Bravo was an endearing idiot who was endlessly watchable.

No other cartoon on this list looks more like a 90s cartoon than Rocko’s Modern Life. The vibrant colours, catchy theme tune, strange character designs and the offbeat premise (an Australian wallaby moves to America and lives with a greedy cow named Heffer and a neurotic turtle named Filburt) all perfectly encapsulate the weird and wonderful nature of 90s cartoons. The show was a loose take on the ‘fish out of water’ scenario as the loveable Rocko just couldn’t get to grips with modern life. Although at times it offered insightful satirical jokes and surprisingly adult innuendos, Rocko’s Modern Life was always a show with a big, fun personality at its heart. 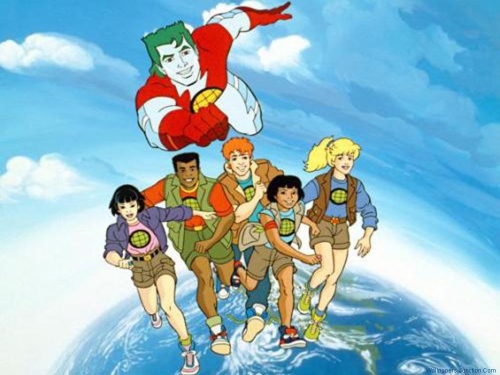 On paper, a show like Captain Planet and the Planeteers really shouldn’t have worked. A group of kids from around the world are given magical rings which can summon an environmentalist superhero who is dedicated to saving the planet, and each episode focuses on different environmental threats like greedy businessmen polluting the air with their factories or poachers targeting elephants in Africa. The thought of having to learn about environmental responsibility seems like something most kids would roll their eyes at, especially when they’re just trying to watch cartoons. However, although the show was always pretty blunt in getting its message across, it was actually pretty cool. Captain Planet was a legitimately good superhero and his morality lessons never got in the way of something that most superheroes do anyway: save the world. 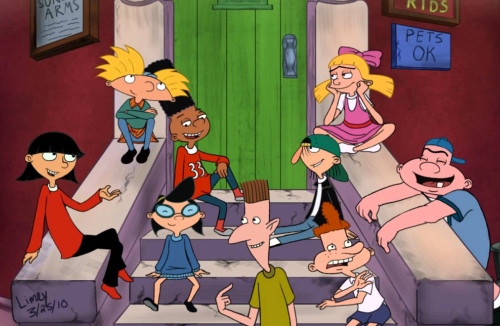 Few shows perfectly captured childhood friendships like Hey Arnold did. Sure, other cartoons featured characters who got into all sorts of fantastic, impossible adventures week after week, but Hey Arnold knew that most kids spent their time slugging through boring school days, hanging out with friends and putting up with crazy families. The show still made room for the absurd and at it’s heart it always had the sensibilities of a kid’s cartoon, but for most of its young audience the show served as a pretty accurate representation of what they were going through in their own lives. 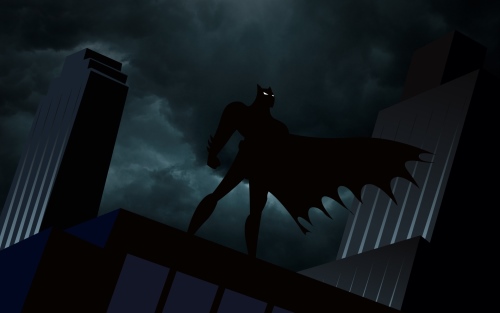 Many comic book fans rightfully think that the 90s weren’t the best time for superhero movies. Reliable cinematic franchises like Superman and Batman were suffering from diminishing returns and Marvel had yet to make its mark on the big screen. However, while George Clooney was running around on the silver screen in his silly batsuit with nipples, the Batman cartoon was showing everyone how to truly do the character justice. Batman: The Animated Series may have been intended for a younger audience, but it had a very dark, mature tone and dealt with complex issues not touched upon by other cartoons. With episodes that circled around grief, tragedy, corruption and even politics, the series served as a bridge for its young audience into more ‘adult programming’. The series also had outstanding production values and it is still praised to this day for it’s quality of voice acting, animation and storytelling. Although other superhero cartoons like X-Men, Spider-Man and Superman were popular during the 90s, none of them could touch the quality of Batman.

It’s fair to say that most cartoons from the 90s featured characters who had a mindset similar to their intended audience, but Rugrats really took a gamble on setting an entire show around a group of babies and toddlers. Rugrats could have easily been dismissed by viewers who thought it was a cartoon for pre-schoolers, but it’s instantly obvious that the cartoon aimed to capture the innocence and imagination of childhood. Although Tommy, Chuckie, Phil, Lil and Angelica were much younger characters than those featured in other cartoons, the idea of a group of babies being able to communicate with each other in their own little world without adults knowing what was going on is an endearing premise for kids of all ages. Rugrats was always wonderfully inventive and each episode focused on the group getting into scenarios which were deliberately skewed and distorted by their young minds. Some episodes played out like mini heist capers as the babies explored seemingly everyday environments while others (like the time the group have to get their immunisation shots) are a pretty accurate representation of how warped a situation can become in the eyes of a child. Although the show eventually ran out of steam and even attempted an ill-advised spin-off in which the kids were all grown up, Rugrats was required viewing for any child of the 90s.

Top 10 TV Series Based on Movies