You don’t have to go to a museum to admire his artwork. A large number of Banksy’s works can be seen on the street, under viaducts and in other unexpected places. The artist is known for his graffiti style and the political message that his artworks all convey. From time to time he takes a trip to other types of art such as performance, films or exhibitions. Despite his world fame, the artist still manages to remain anonymous: nobody knows who Banksy really is. This is the top 10 Banksy works. 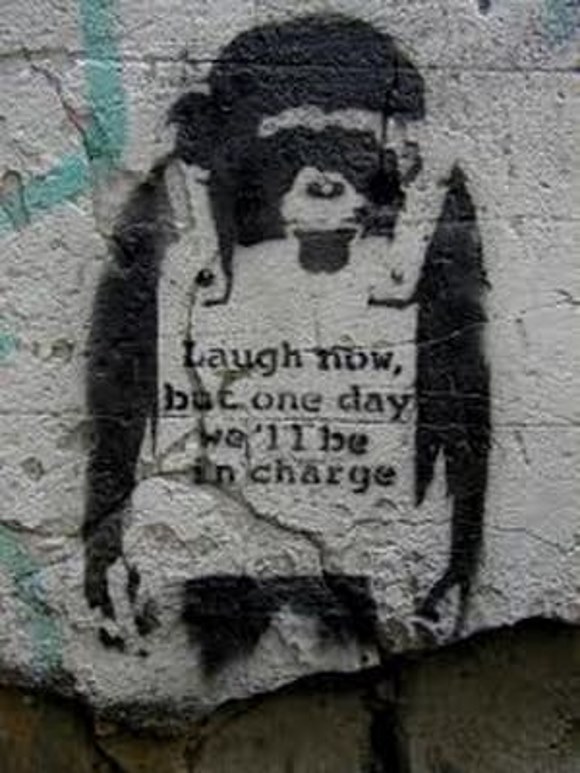 Banksy regularly uses monkeys in his artwork, and the Laugh Now series is a well-known example. The depiction of a humiliated monkey with a billboard around its body is reminiscent of man’s exploitation of animals. “Laugh now, but one day we’ll be in charge” is a warning: it is not obvious that people are the ones who are in control. 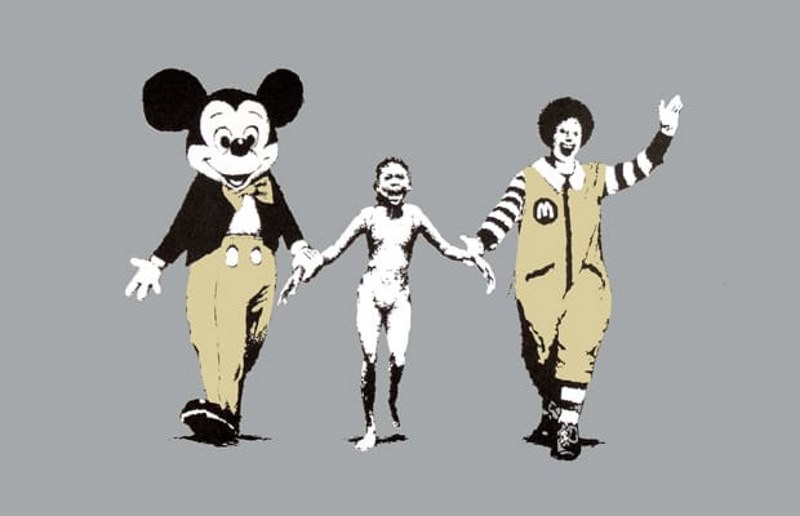 It is one of the most iconic photos ever taken: the image of a crying girl running from a napalm bomb. Banksy takes this image and puts a different spin on it. The artist has always criticized the capitalist society we live in and the power that large corporations have. The question that Banksy raises with this work is clear: are Mickey Mouse and Ronald McDonald the new napalm bombs of our time? 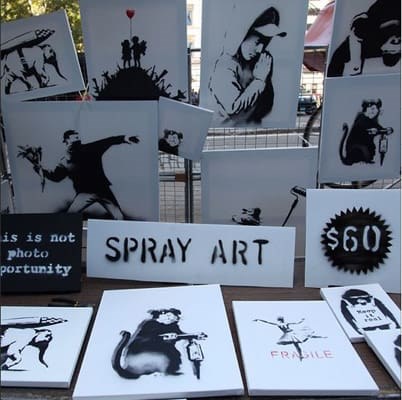 It is well known that works of art by famous artists are sold for astronomically high prices. This Banksy performance plays with the strange appreciation of art. The artist hired a man to sell his artwork in Central Park. For only $ 60, anyone could hang an original work by Banksy on the wall. Almost all tourists walked past the stall, assuming that the paintings had to be fake for that price. Only seven works were sold to owners who were very happy with their purchase afterwards.

7. Sweep it Under the Carpet 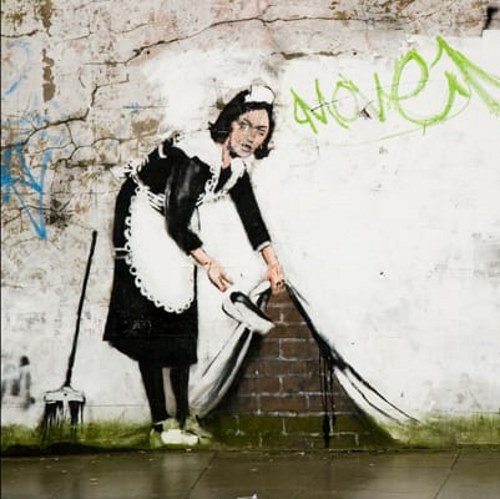 An image of a cleaning lady sweeping dirt under the carpet must be about the government covering up wrongs, right? Nothing is less true. After many misinterpretations of this work, Banksy indicated that he wanted to make a portrait of cleaning lady Leanne, who he once met in a hotel. His reasoning is that in the past only kings and queens could have portraits made of themselves, but now it was time for cleaning ladies like Leanne to have themselves immortalized.

6. Exit Through the Gift Shop 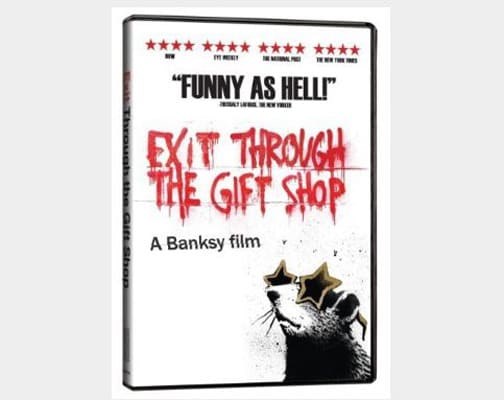 This film about and by Banksy was created in the most unique way. The film was originally made by a street art fan who was keen to get as many artists on the screen as possible. The film begins as a quest for Banksy, but soon the artist turns the tables: he starts directing the film himself. The end result is a fascinating film about the relationship between street artists, their anonymity and the fans who try to expose them. 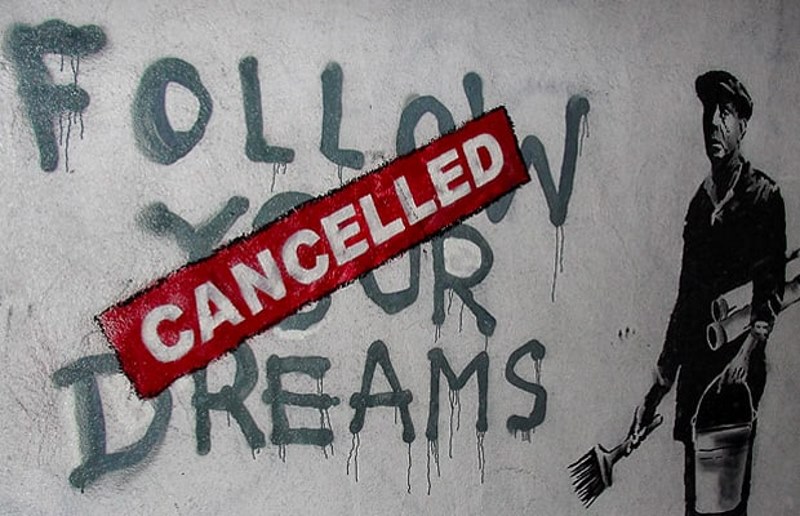 Chasing your dreams is an ideal that appears in almost every movie or book. As long as you follow your dreams you can achieve anything you want. Banksy plays with this cliché by putting a big stamp on the words with “canceled”. The hope for a better life is gone, chasing your dreams is of no use anymore. The painting gets an extra meaning because it is placed in a poor neighborhood in Boston. Banksy criticizes American society and the differences between rich and poor. According to the artist, the poor of the country no longer even have the chance to pursue their dreams. 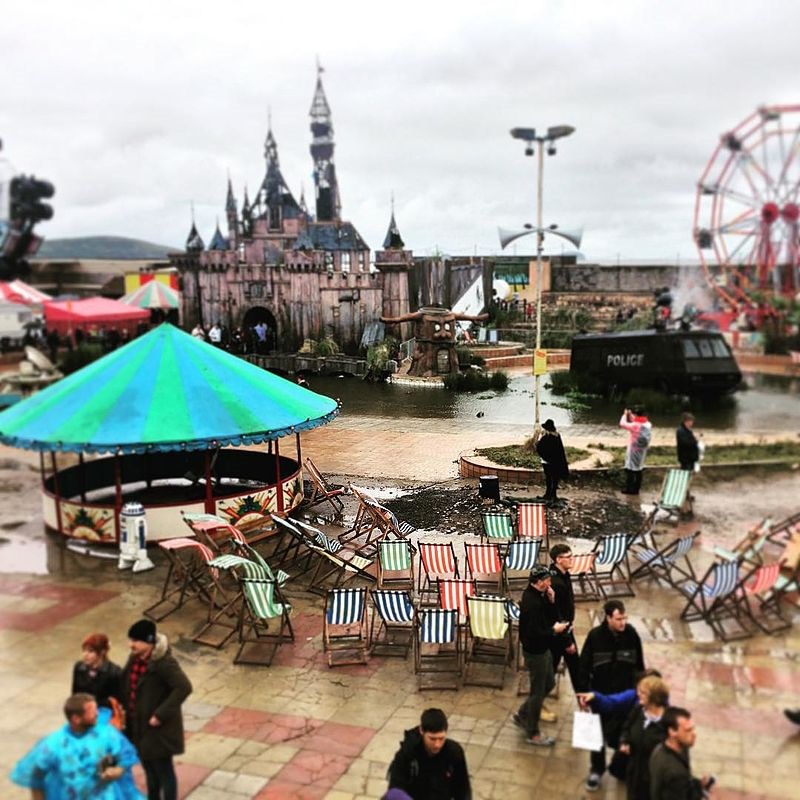 It is clear that Banksy is not a fan of Disney. With this project, the artist turned the ideas of the magical Disneyland completely upside down. He created an amusement park that mainly revolves around alienation, disappointment and the saddest images. Visitors can spend a day walking through a park designed by the artist from start to finish, clearly criticizing the magical illusion Disney is trying to sell. The exhibition focuses not only on Disney: criticism about refugee politics and the glorification of stars is also discussed.

3. The Son of a Migrant from Syria

During the great refugee flow of 2015, Banksy decided to criticize the way people look at refugees. He painted a picture of Steve Jobs on a wall in Calais, where many Syrian refugees were. You can see how the founder of Apple lugs his belongings and a computer. The message is simple: Revolutionary genius Steve Jobs was also an immigrant from Syria, so don’t be too quick to judge someone’s origins. 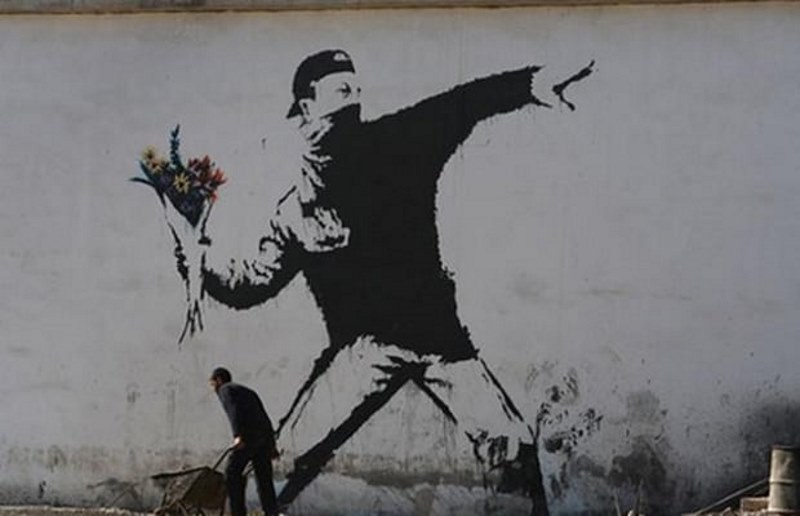 This image of a man with a scarf covering his face is reminiscent of the images of rioting and fighting hooligans or protestants in the street. Where there might normally be a weapon in his hands, there is now a bunch of flowers. Banksy combines an image of hatred and violence with a sign of hope and love. A rosy look to the future.

1. There is Always Hope 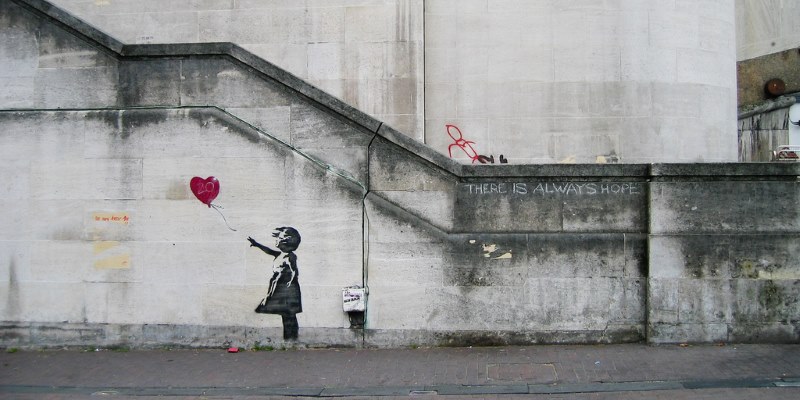 The image of the girl with a heart balloon slowly flying away in the wind is Banksy’s most iconic work. The image can be found on paintings, shirts, mugs, and any other kind of merchandise you can imagine. The message is simple and universal: a child loses hope and innocence, but at the same time these ideals are still within reach for all of us. As Banksy painted with this artwork: “There is Always Hope”.