Peter and Bobby Farrelly are more commonly known as the directing, writing and producing duo The Farrelly Brothers. The siblings are the collective brains behind some of the most cherished modern raunchy and slapstick comedy classics, and the genre is all the more better for their efforts. 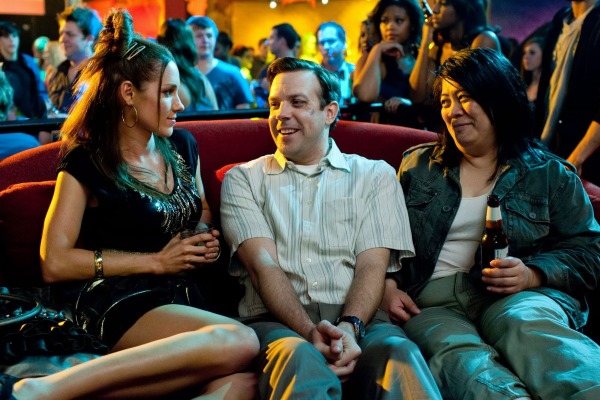 Best friends Rick (Owen Wilson) and Fred (Jason Sudeikis) have been married for a long time, but they are showing signs of restlessness. To revitalize their marriages, their wives (played by Jenna Fischer and Christina Applegate) grant them one week to do whatever they please – no questions asked. At first, the deal sounds like a dream come true, but as the week marches on, the two friends discover that their expectations are wildly out of sync with reality. It isn’t long before the duo realise that the grass isn’t always greener on the other side. 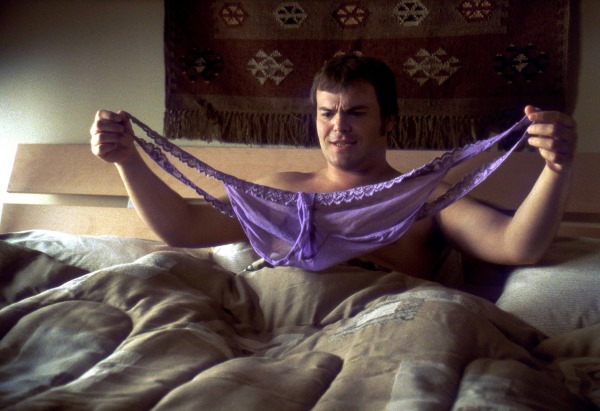 Taking his dying father’s advice, Hal (Jack Black) dates only the embodiments of female physical perfection. But that all changes when he has an unexpected run-in with self-help guru Tony Robbins. Intrigued by Hal’s shallowness, Robbins hypnotizes him into seeing the inner beauty that exists in the least physically appealing women. This ends up with Hal dating the enormously large Rosemary (Gwyneth Paltrow) – who he sees as a slim figure. Managing to precariously balance a heartfelt message with a pretty relentless barrage of fat jokes, Shallow Hal is an overlooked but fun romp with an energetic central performance from Black. 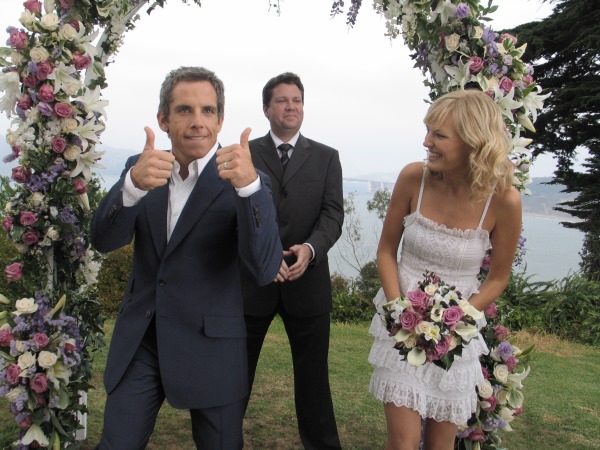 Ben Stiller stars in this romantic comedy as a sport shop owner who dives headfirst into a relationship with Malin Akerman and marries her after only 6 weeks of dating. Almost instantly, he discovers that this was possibly a mistake and they aren’t the perfect match; she blasts music he hates, is in tremendous debt, doesn’t actually have a job and has violent sex with him causing injury. Whilst on their honeymoon in Cabo, he meets Michelle Monaghan who is on a vacation with her family. The two instantly spark up a connection and he begins to fall for her. He is then left with one tricky situation – ending his marriage, without letting his new love-interest find out the real reason for him being in Cabo. Although the film received mixed reviews, Stiller and the Farrellys are a perfect fit and ‘The Heartbreak Kid’ is an enjoyable enough comedy. 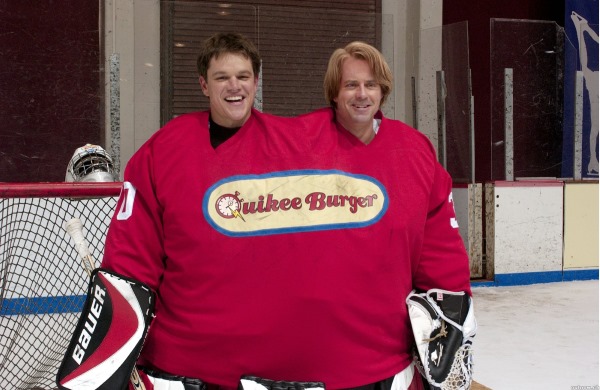 ‘Stuck on You’ follows conjoined twins Bob and Walt Tenor (Matt Damon and Greg Kinnear) as they try to live their lives as normally as possible. Outgoing and sociable, Walt aspires to be a Hollywood actor while shy, introverted Bob prefers the quiet life. They run Quickie Burger, a diner in Oak Bluffs on Martha’s Vineyard, where they take advantage of their handicap as the fastest grill cooks in town. When fading Hollywood actress Cher (Cher) decides to get her show ‘Honey and the Beaze’ cancelled, she hires Walt and his brotherly appendage as her co-stars; counting on the odd pair to lower ratings. However, their addition surprisingly achieves the opposite and Walt becomes a huge star. As their ‘attachment’ becomes more and more of an issue the two decide the risky operation of separation is the only way to salvage their personal lives. 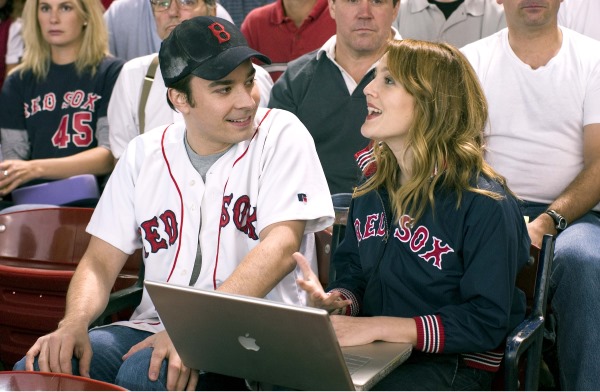 Unlike most Farrelly Brothers movies, ‘Fever Pitch’ was not written by the duo and instead is based on the Nick Hornby romantic comedy novel of the same name. It stars Jimmy Fallon as a die-hard Red Sox fan who owns anything and everything to do with the team, apart from toilet paper which bears the New York Yankees insignia. He meets Drew Barrymore, a workaholic executive who becomes attracted to him due to his ability to show a passion for something. However, things take a turn for the worse when his obsession gets in the way of their relationship. A modest box office and critical success, one of the more interesting points of the film was the need for a complete rewrite of the ending. It was predicted the Red Sox would lose the playoffs, but they went all the way to win the World Series, breaking the terrible ‘Curse of the Bambino’ – they hadn’t won in 86 years. 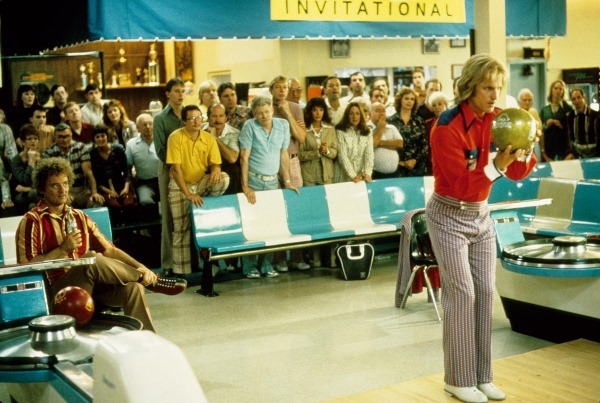 ‘Kingpin’ stars Woody Harrelson as Roy, a bowling prodigy who loses his hand after a plan to hustle some bowlers with the help of Bill Murray’s Ernie McCracken turns sour. Now with a prosthetic hook, he turns to convincing Ishmael (Randy Quaid), an Amish man he spots bowling, to go pro. After teaming up with a woman on the run from her abusive boyfriend, the trio head to Vegas to compete in a bowling competition with a $1 million prize. Whilst there, they run into McCracken and after a violent confrontation, Ishmael breaks his hand, forcing Roy to bowl. Although not a box office success, the movie has gained a considerable cult following (it even ended up on Siskel’s top ten films of 1996) and features unmissable performances from both Harrelson and Murray. 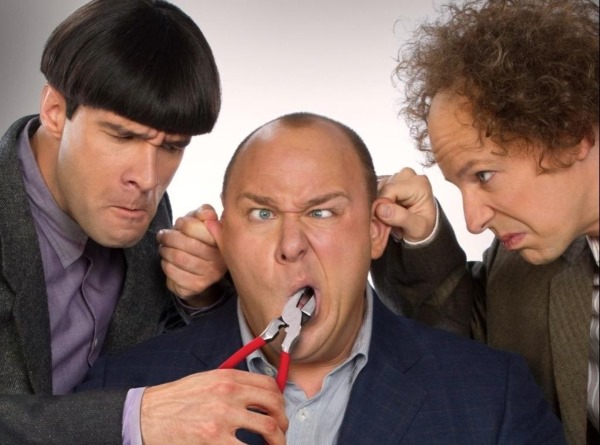 Based on the 1930s slapstick comedies of the same name, ‘The Three Stooges’ was in development for several years before entering production. The original cast sparked huge interest with Benicio del Toro as Moe, Sean Penn as Larry and Jim Carrey as Curly. Unfortunately, they all dropped out and were replaced with the slightly less stellar sounding cast of Chris Diamantopoulos, Sean Hayes and Will Sasso. Trying to save their childhood orphanage, the Stooges stumble into a murder plot and end up on a wildly successful reality show. The three main leads turned in pitch perfect impersonations of the trio (especially Diamantopoulos) and the Farrellys proved that slapstick comedy never goes out of style. 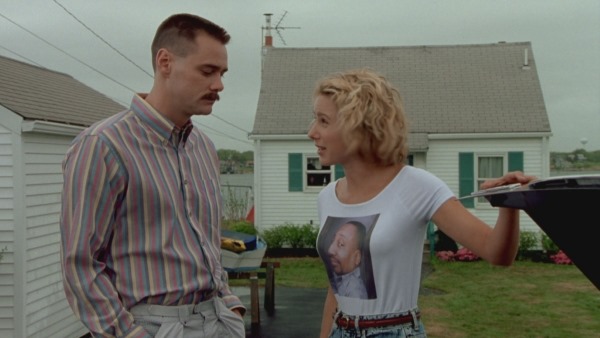 Charlie Baileygates (Jim Carrey) is a 17-year veteran of the Rhode Island police force. He is mild-mannered, hard-working, always helpful and a devoted and loving father to three sons. He also has a touch of schizophrenia. Thinking he needs a break, his boss orders him to escort a woman named Irene Waters (Renée Zellweger) from Rhode Island to New York because she reportedly committed a hit-and-run. Charlie agrees to help Irene escape but unknowingly leaves his medication behind for his Split Personality Disorder, unleashing Hank. Hank’s got a filthy mouth, drinks like a fish, breaks skulls and loves dirty, dirty sex. Despite the random and vile appearances by Hank, Charlie and Irene form a bond and help each other out of many tricky situations. Both Carrey and the Farrellys are at their best in this debaucherous road trip comedy with a twist. 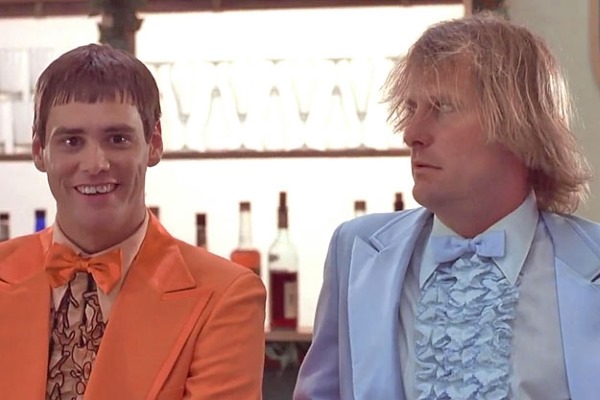 For Harry (Jeff Daniels) and Lloyd (Jim Carrey) every day is a no-brainer because the pair don’t really use their brains at all. Lloyd Christmas and Harry Dunne are best friends and roommates who struggle with every aspect of life. Lloyd, a limousine driver, falls in love with Mary Swanson (Lauren Holly), a woman he is driving to the airport. She intentionally leaves a briefcase in the terminal as ransom money for her kidnapped husband, Bobby. Lloyd tried to return the suitcase to her but her flight has already left. The imbecilic pair decide to go follow her in order to return the money; still unaware of its connection. As Harry and Lloyd are pursued across the country by hired killers and police, they find both their friendship and their brains tested. ‘Dumb and Dumber’ was a well deserved breakout jackpot hit for the Farrelly Brothers, earning $247 million at the box office and scoring both a sequel and prequel.

Nebbish Ted’s (Ben Stiller) teenage dreams come true when he nabs a date to the prom with the insatiable Mary (Cameron Diaz). However, an unfortunate zipper-related accident means that the prom date never happens and thirteen years later, Ted is still obsessed with Mary. He hires a private investigator to track her down but the PI becomes equally obsessed with her and proceeds to lie to Ted; telling him she is grossly overweight and has multiple children, hoping he’ll avoid contacting her. As the story progresses, we find out that nearly every male that Mary comes in contact with falls head over heels in love with her. ‘There’s Something About Mary’ was an enormous success, grossing more than $350 million worldwide, and is remembered for a number of hilarious scenes, including an unusual hair gel substance. The film catapulted our two leads into the limelight and Cameron Diaz won her first Golden Globe nomination for her role.

Top 10 Greates Spy Movies Ever Made

Top 10 Space Movies Of All Time