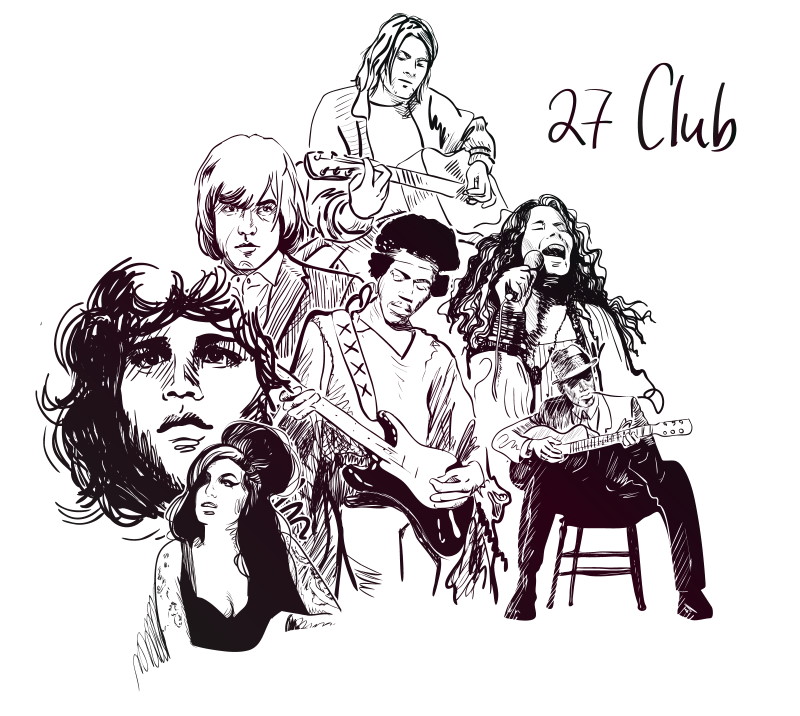 The 27 Club is an infamous group which contains some of the world’s most acclaimed musicians. However, it’s not a club which any musician really wants to be a part of. The ‘entry requirements’ for the 27 Club is that its members have to have died at the age of 27 (and of course they must have reached sort of level of fame). While some people pass it off as mere coincidence, others look for some sort of connection or theory which links the death of these young stars. Whatever the reason, it is startling to see just how many rising musicians died at this age. Here are some of the 10 most famous members of the 27 Club.

The Manic Street Preachers were one of the more intelligent and articulate bands from the 90s Brit Pop explosion, and this was in large part due to the songwriting abilities of Richey James Edwards. Edwards was one of the driving creative forces behind the band, and he was openly candid about his battles with depression and self-harm. In 1991, he gained front page attention when he carved “4 Real” into his arm with a razor blade when he got into an argument with NME reporter Steve Lamacq about the band’s values. Edwards was admitted to celebrity psychiatric centre The Priory in 1994, and in December of that year he made his last onstage appearance with the band. Edwards disappeared sometime in early February 1995 and a police investigation was launched to find the potentially mentally unstable musician. Two weeks later, Edwards’s car was found abandoned near the Severn Bridge and there was evidence he had been living in the vehicle for some time. Although some close friends of Edwards still maintain that he was not the type to kill himself, he was declared legally dead by police in 2002 who suspect he committed suicide by jumping off the bridge.

https://www.youtube.com/watch?v=QexOuH8GS-Y
Canned Heat were a blues/rock band who were overshadowed by bigger, more ‘showy’ artists in the late 60s. Nevertheless, they still enjoyed considerable commercial success and played big music festivals like Woodstock and the Monterey Pop Festival. Alan “Blind Owl” Wilson was one of the founders and the lead guitarist of the band, and he was responsible for Canned Heat’s strong links to the blues genre. Wilson was found dead in the woods in his camper van from an overdose on September 3rd 1970. Wilson had been a keen conservationist and he had tried to kill himself some months early, so many thought that he gone into nature to commit suicide. However, no suicide note was ever found.

One of the founding members of The Rolling Stones, guitarist Brian Jones developed a serious drug problem as the band’s popularity was on the rise. His addiction worsened and his behaviour led to several encounters with the police and criminal charges. When Jones was refused a work permit for the band’s North American tour, the band was pressured by their management to find a new guitarist. Mick Taylor replaced Jones in June 1969, and Jones was given the opportunity to tell the public that he was voluntarily leaving the band. Less than a month later, Jones was found dead at the bottom of his swimming pool in his Sussex home. The official coroner’s report attributed his death to “misadventure” and it found that he had an enlarged liver and heart due to years of drug and alcohol abuse.

Yet another prominent musician from the 60s wave of psychedelic rock, Ron McKernan was one of the founding members of The Grateful Dead. One of the most popular acts associated with the hippy counter-culture movement, The Grateful Dead quickly rose to fame following their formation in 1965. Unfortunately, a life of heavy drinking (which had begun in his teens) had taken its toll on McKernan by the late 60s and had started to affect his personal health while touring with the band. McKernan’s final gig was in June 1972 and he died in his home on March 8th 1973 of a gastrointestinal haemorrhage.

Janis Joplin was one of the few female rock musicians from the 1960s who enjoyed the same level of popularity as her male counterparts. Joplin started out playing folk music before she became one of the most influential artists in the psychedelic-acid rock genre, and she found mainstream success with songs like “Piece of My Heart” and “Summertime”. Sadly, Joplin died from a fatal overdose of drugs and alcohol on October 4th 1970.

Robert Johnson was one of the most influential blues singers of all time, and his recordings continue to influence many musicians to this day. Sadly, he never enjoyed any public recognition or fame during his lifetime. Johnson is perhaps best known to many people as being the man who sold his soul to the Devil at the crossroads in return for guitar skills. This ‘mythology’ surrounding Johnson grew from his posthumous success when fans examined the lyrics in songs like ‘Cross Road Blues’ and ‘Me and the Devil Blues’. However, most of Johnson’s actual life is poorly documented and his death is shrouded in secrecy. Johnson died on August 16th 1938 after suffering from symptoms which suggested he had been poisoned. Music historians still argue to this day whether he was poisoned deliberately (one of the most popular theories is that a jealous husband gave a poisoned beer to Johnson) or by accident.

Although she is now almost entirely remembered for her struggles with addiction, Amy Winehouse was one of the most promising young British musicians when she achieved commercial success in 2004. Her debut album ‘Frank’ was met with critical acclaim and her instantly recognisable soulful voice made her a global sensation. For years, critics and journalists morbidly predicted that Winehouse would die long before her time, and they were unfortunately proven right on 23rd July 2011. Winehouse had weaned herself off a serious drug habit sometime in 2008, but she replaced the illegal substances with alcohol. Bouts of binge drinking left Winehouse looking dishevelled and ill, and she was discovered dead from alcohol poisoning by her bodyguard in her London home. Winehouse was one of the most recent musicians to join the 27 Club, and her album Back to Black posthumously became one of the most successful albums of the 21st Century.

Although many famous 27 year old musicians had died long before Kurt Cobain’s suicide on April 4th 1994, it was the Nirvana singer’s death which catapulted the idea of the 27 Club into the public conscious. Nirvana was responsible for the birth of the Grunge scene in the early 90s, and they reached global mainstream success with the release of their second album ‘Nevermind’. Cobain was another musician who struggled with drug addiction and mental health problems, but his suicide is still the subject of speculation from fans and the media.

One of the most influential guitar players of all time, Jimi Hendrix was at the height of his fame when he accidentally overdosed on strong barbiturates on September 18th 1970. Having headlined both Woodstock and the Isle of Wight Festival in the year before his death, Hendrix was a rock legend and his untimely death shocked the world. Although there are conspiracies that he was murdered, close friends of Hendrix have said that he would often mix alcohol and drugs without giving much thought to the possibility of an overdose.

The Doors frontman Jim Morrison was an intelligent musician who fused the band’s unique brand of psychedelic rock with deep poetry and infamous stage performances. Following the release of the band’s sixth studio album in March 1971, Morrison moved to Paris with his long-term girlfriend Pamela Courson to focus on his writing. However, not long after this move to Europe he was found dead by Courson on July 3rd. Courson said that Morrison had accidentally inhaled heroin thinking it was cocaine, but this has since been disputed by close friends of Morrison. Courson died from an overdose three years later, also aged 27. Morrison’s death is surrounded in suspicion because no autopsy was ever performed on his body. However, French authorities claim that this is because they found no evidence of foul play and Morrison had a long history of drug and alcohol abuse. Morrison’s grave in Paris is one of the city’s biggest tourist attractions, and to this day many dedicated fans, hippy children and young bohemians visit the site to pay tribute.

Top 10 Most Succesful Girl Groups of All time