Insects are among the most diverse groups of animals on the planet, including more than a million described species and representing more than half of all known living organisms. The number of extant species is estimated at between six and ten million. Most are harmless to humans, some however can be very dangerous, even deadly! 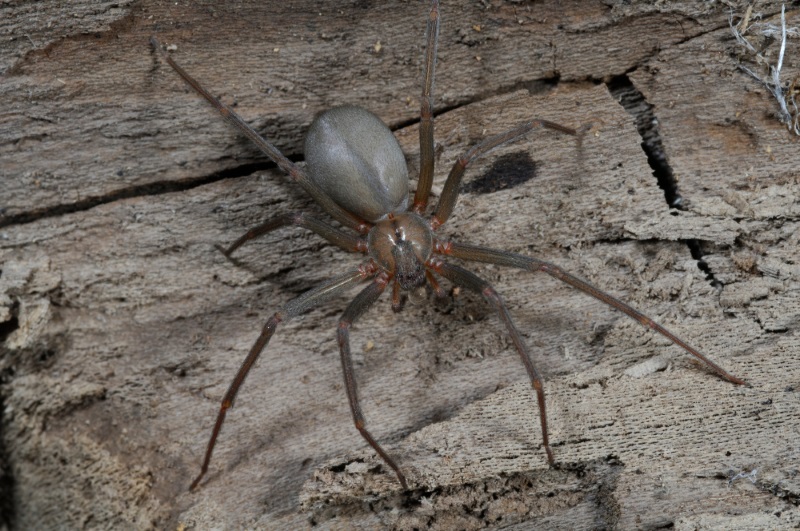 The brown recluse spider is perhaps the gentlest of all the creatures on this list. They are not aggressive and will only bite if pressed against the skin, for example, when the spider is caught up in clothing while the wearer is dressing or undressing. If the spider is on fabric, its teeth are too small to penetrate most types of fabric. However, should the spider succeed in biting a person, the result can be very serious. The bite is often not noticed immediately as it is not painful. In serious cases the hemotoxic venom causes necrotising ulcers which refuse to heal. (Hemotoxic means the toxin works on the red blood cells, destroying them and interfering with clotting processes and ultimately leading to organ degeneration.) Fortunately these cases are rare and two-thirds of these necrotic lesions will heal cleanly after a few months. Despite their bad press and the virulent toxin that they produce, there have been no confirmed cases of anyone dying from a brown recluse bite (although some deaths have been attributed to them). 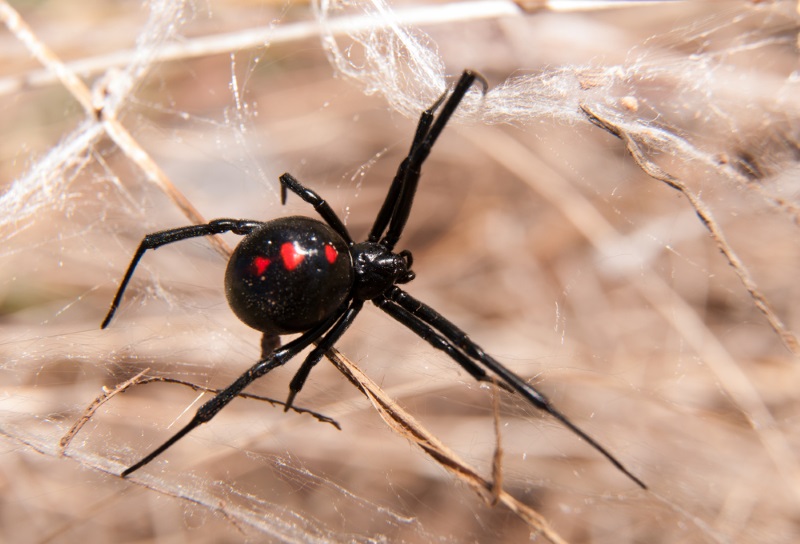 Known for being unkind to matrimonial partners, black widows are distinctive looking spiders with colourful patches on their otherwise black bodies warning of the venom they carry. Symptoms of a bite from a black widow include nausea, breathlessness and muscle aches, but, contrary to popular belief, the venom is generally not fatal to healthy adults. The elderly, the very young and those who are not in the peak of health, can die from the bite of a black widow although no deaths from black widow bites have been reported in the USA since 1983. 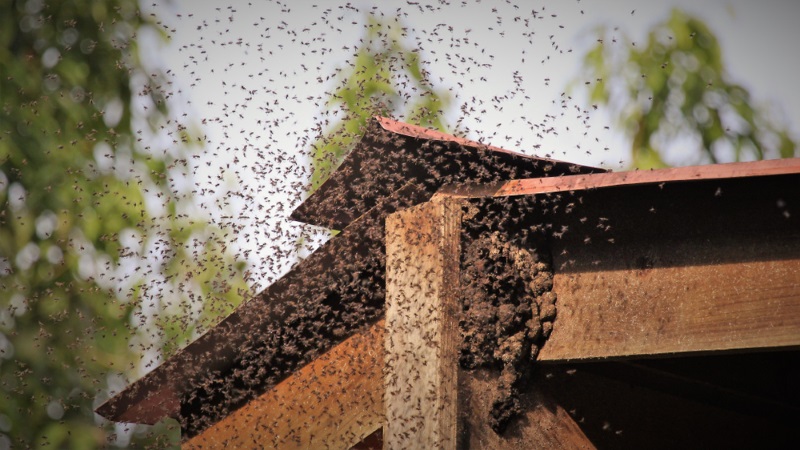 There is a global campaign afoot to save the bees at the moment (we do need them; without bees the world’s crops will not be fertilised and this will result in a shortage of food in a shockingly short time!) but some bees have learned to take care of themselves! Swarms of the so-called ‘Africanised’ bees are slowly spreading across the world, the result of unwary genetic experimentation. Scientists were trying to breed hardier bees that would produce more honey, when they introduced fierce African bees into European hives. The resulting hybrids, rather than increasing honey production, were found to have adopted the aggression and stronger toxin of their African ancestors. Some of the bees escaped from the ‘control zone’ in which they were being kept and studied and it is these swarms that are slowly, but steadily, sweeping all over the world. Some 50 to 100 people die every year from bee stings. 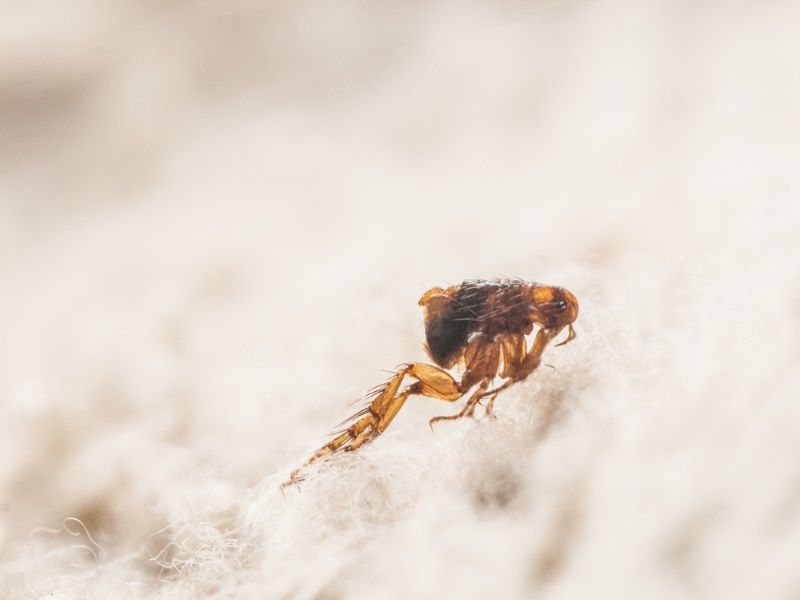 Annoying little jumpers, fleas are practically indestructible, as anyone who has ever found one on themselves can attest! Human blood is particularly tasty to fleas and they will readily leap onto the nearest available person whenever possible! Fleas were responsible for the spread of the Black Death, which is believed to have killed more people than all the wars so far – that is a lot of blood to be responsible for! 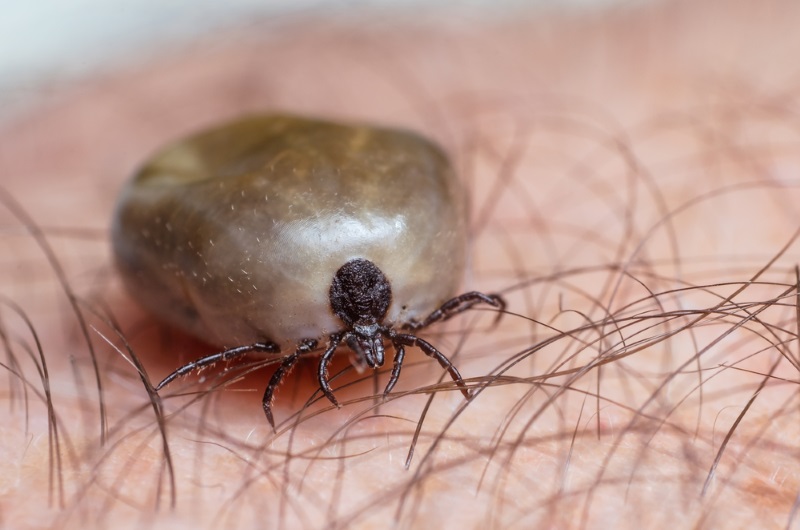 Ticks are actually arachnids, rather than insects, and they live on their host (usually animals) drinking their blood and growing fat. As ticks (and fleas) need their hosts to be alive in order to feed on them, it is unlikely that the spread of tick-borne disease is anything other than incidental. There are a huge number of diseases caused or carried by ticks, the best known of which are Lyme disease, tick-bite fever, Rocky Mountain spotted fever and tularaemia along with a host of others, both widespread and confined to specific regions. Just looking at Lyme disease: approximately 30,000 cases of the disease are reported to the CDC every year and up to 20 per cent of those sufferers will die without careful treatment. 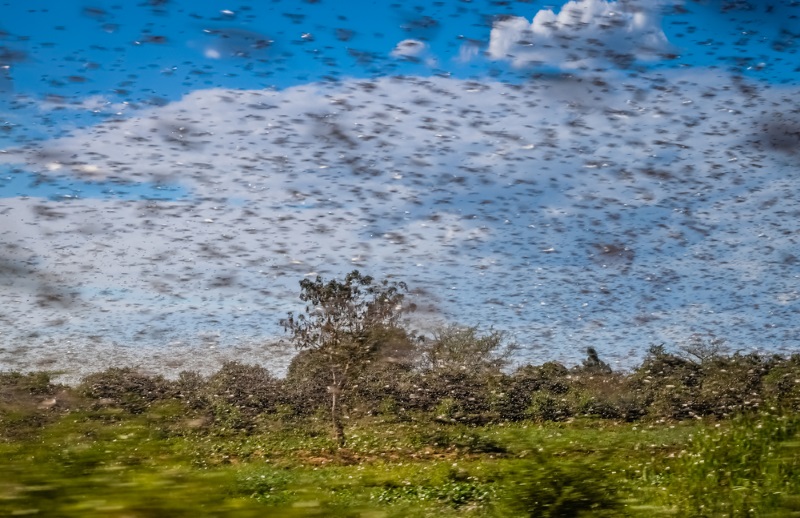 Scaly and repulsive, locusts are not the most endearing creatures on the planet. While the insect does not physically attack people, it strikes at something close to our hearts: our food! Locusts cause human death and suffering by devastating growing crops, both those eaten by humans and those needed to feed animals being raised as food – a double whammy that can quickly cause famines. A swarm of locusts can contain billions of the insects and each locust can eat its own weight every day, making it clear that even the biggest farm will not satisfy a swarm of locusts for very long! 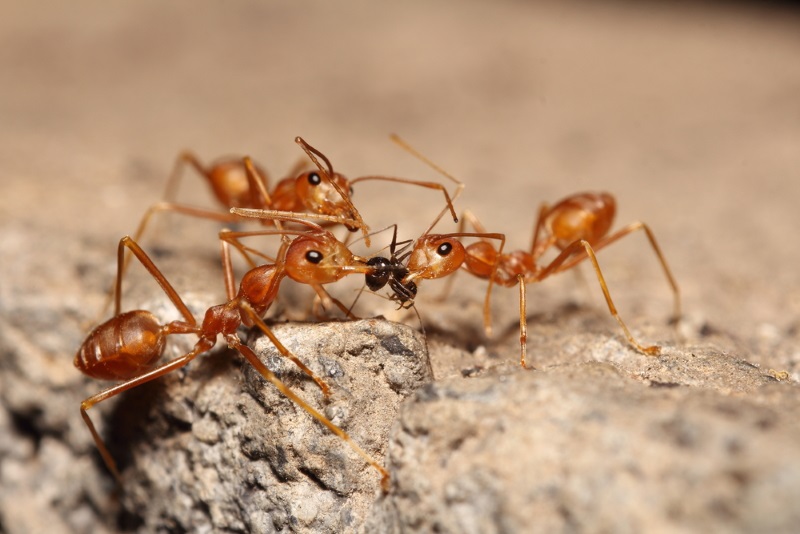 This name actually refers to several species of ant, most of which have a reddish or orange colouration and all of which offer a painful bite and sting. Most ants bite and spray a formic acid solution simultaneously, but with fire ants, they bite to get a grip on their victim, and then sting they prey injecting them with a toxin called selonopsin. This toxin is intensely painful and feels like a burn, hence the name ‘fire ant’. These ants tend to be very aggressive and it is estimated that up to 60 per cent of people who live in the ants’ habitat will be stung at some point. While deaths are rare, they do occur, usually as a result of extreme allergic reactions and anaphylactic shock. 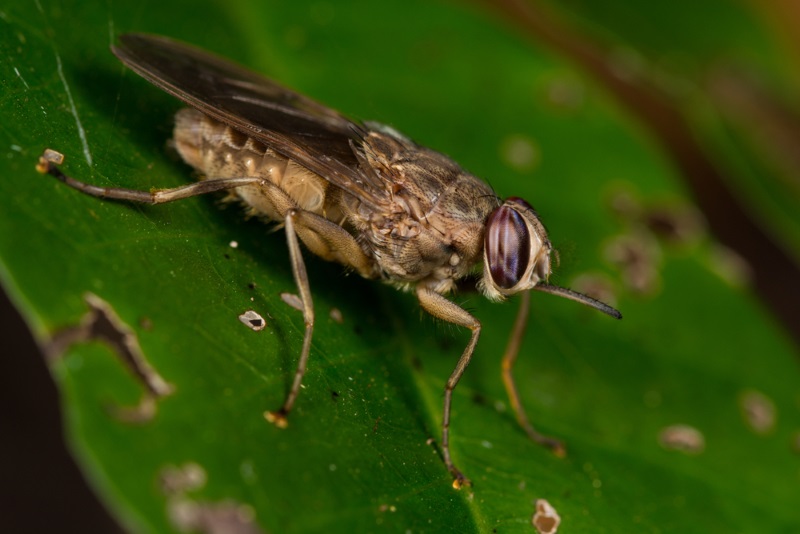 Tsetse flies are large flies that live in Africa and feed on blood. Physically, they look like large flies and can sometimes be ignored until their painful bite is felt. The easiest way to tell a tsetse fly from a house-fly is to look at the wings when the insect is at rest – house-flies’ wings rest next to one another, while tsetse fly wings are folded one under the other. Tsetse flies carry a disease called trypanosomiasis which presents in humans as sleeping sickness and in cattle and other (mostly domesticated) animals as nagana and surra. It is believed that up to half a million people are affected by diseases caused from the bite of the tsetse fly and that up to 80 per cent of these will die from the disease. 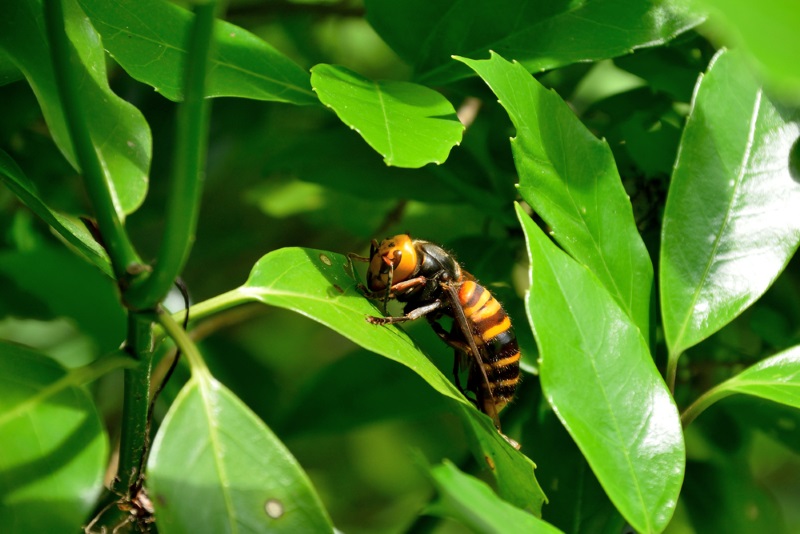 Imagine a hornet four times the size of a regular bumble bee, with a sting that is reported to feel like having a ‘hot nail’ hammered into you and that can fly at speeds of up to sixty miles per hour, ensuring that you will never be able to outrun it – that is the Japanese giant hornet! These immense insects, which can grow up to 4.5 centimetres long, were the subject of a recent National Geographic documentary which showed just 30 of the hornets laying waste to a hive of 30,000 European honey bees in a bid to feed their young. While bees in other regions have learned to deal with wasps and hornets (they form a buzzing mass around the intruder, raising the temperature high enough to kill), European bees have no such defence mechanism, as yet. (The giant hornets are believed to have migrated to Europe in pot plants.) The hornets are not particularly aggressive, but will sting if they are disturbed and their immense 6.25 millimetre stings deliver a painful and heavy dose of venom to their victim. It is the amount of venom that makes the sting so very painful, and it can also cause allergic reactions such as anaphylactic shock which can be fatal. Some 30 to 40 people die from hornet stings every year, making the giant hornet the second-most lethal creature in Japan – after humans! 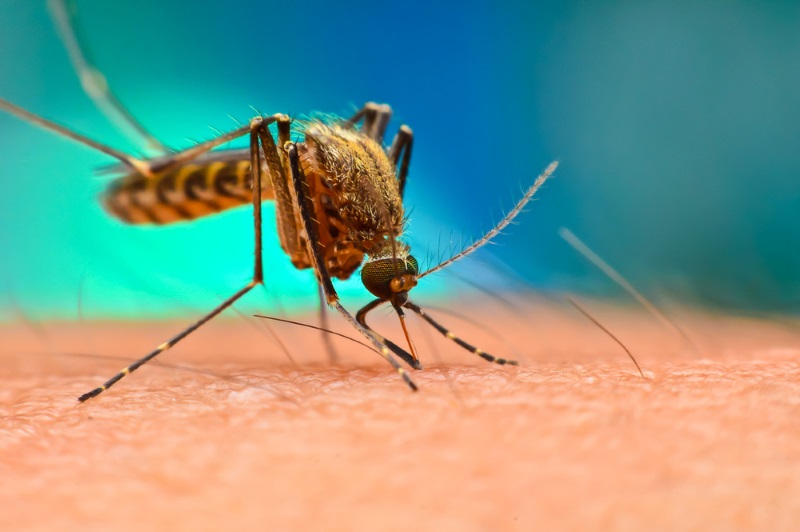 While the Anopheles mosquito is the best known of these annoying, whining little pests, there are actually 460 species of mosquito, of which 100 can transmit disease and 30 or 40 carry transmittable parasites. Interestingly, whoever named the anopheles mosquito (J W Meigen, a German entomologist) was not at all charmed by the insect: anopheles comes from the Greek and means ‘good-for-nothing’! The huge range of diseases and parasites carried and passed along by mosquitos could fill an entire book, but the best known include malaria, dengue fever, yellow fever, West Nile fever and elephantitis just to name a few. An estimated 700 million people are infected (and many of those die without modern treatments) every year by mosquitos, most of these in less developed countries, although widespread air travel has seen the pests migrating to countries where they are normally not found. (Just to put that into perspective 700 million is 10 per cent of the population of the entire world…)

Top 10 Largest Crocodiles In The World