Kids do the creepiest things. There’s no denying that horror movies have always used children to terrifying results as there’s something intrinsically terrifying about a supposedly innocent child doing something they shouldn’t be doing or being able to see something they shouldn’t be able to see. Whether they’re a vampire, ghost, the antichrist or a seemingly normal kid with a dark secret, some horror movie kids can really get under your skin. 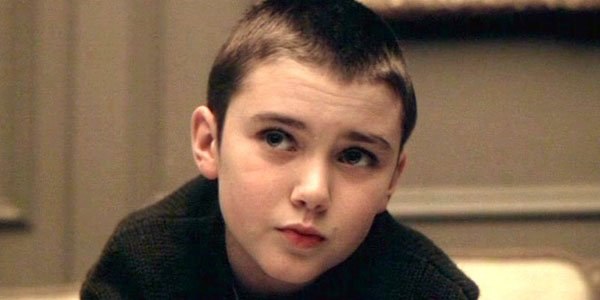 Underrated horror thriller Birth may move at a slower pace than other entries on this list, but that doesn’t mean it struggles to create a disturbing horror experience. Starring Nicole Kidman, Birth follows a woman whose life is suddenly turned upside down by a young boy who claims to be the reincarnation of her deceased husband Sean. Cameron Bright turns in an excellent performance as the younger version of Kidman’s husband and it’s hard to tell whether he is manipulating the grief-stricken Kidman or if he is really telling the truth.

Technically, this is a bit of a trick entry because the ‘Girl in Red’ from Don’t Look Now is actually revealed to be a dwarf serial killer at the very end of the movie. Throughout the trippy drama thriller, Donald Sutherland plays a father who keeps having strange dreams and visions where he sees his recently deceased daughter. When Sutherland finally catches up with the mysterious child in red, the hooded person turns around to reveal that they are actually an adult dwarf and the visions that Sutherland had been having were really premonitions of his own death. A strange movie with a truly shocking twist ending, it’s fair to share that most viewers really didn’t see that one coming. 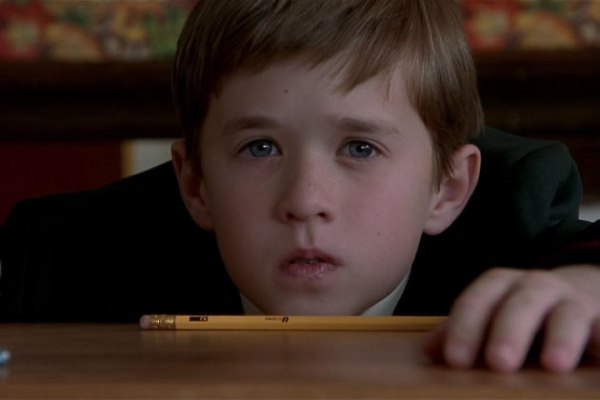 Given M Night Shyamalan’s recent creative output, it can be easy to forget just how refreshing and effective The Sixth Sense actually was when it was released in 1999. Mainly remembered now for that twist, the entire movie just wouldn’t have been the same were it not for Haley Joel Osment’s stellar star-making performance as Cole. Plagued by the ‘gift’ of being able to see dead people, Cole is clearly a haunted, disturbed young boy. Playing against an unusually stoic Bruce Willis, Osment has the wide-eyed innocence of a young boy but is clearly wise (and scarred) beyond his years. 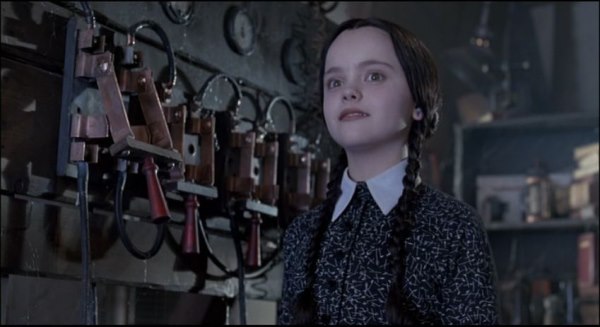 The poster girl for every misunderstood child who ever lived, Wednesday Addams is clearly not just a girl who is going through an awkward phase. Obsessed with death and the macabre and only dressing in the dowdiest, darkest clothing she can find, Wednesday puts any pledging young goth to shame. Quite possibly the most disturbed member of the Addam’s Family (which really says a lot), it’s quite worrying to think what she would have grown up to be like. 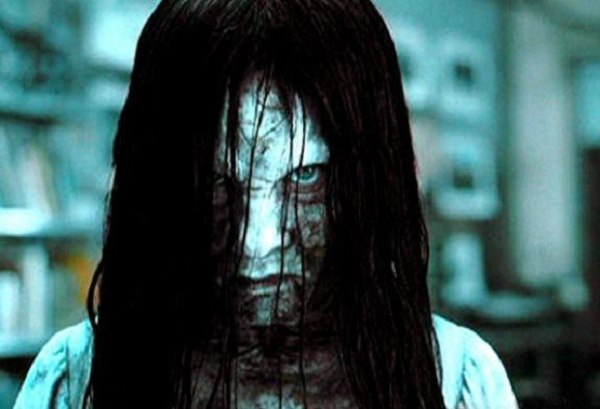 Forget the American remakes, when it comes to creepy kids Japanese cinema does it best. Both Ringu and Ju-On offer pretty inventive takes on the traditional ghost story. In Ringu, a mysterious VHS is linked to a series of deaths where the viewer dies seven days after watching the tape while the Ju-on series centres around a mysterious house which is haunted by vengeful spirits. Both the Ring and Ju-on feature ghosts who have been killed by violent crimes and who subsequently curse the living. However, it’s the fact that these ghosts are both children which elevate the movies into seriously creepy territory. In Ringu, the evil spirit is a young girl called Sadako who was thrown into a well to die. When she emerges from the TV set of her victims, she crawls slowly and spasmodically toward them, her long black hair concealing her face. In Ju-on, Toshio is a young boy who was killed by his father years ago. With white skin, a black tongue and only speaking to make a death rattle type sound, Toshio haunts his former home and suddenly appears next to his victims when they really aren’t expecting it. 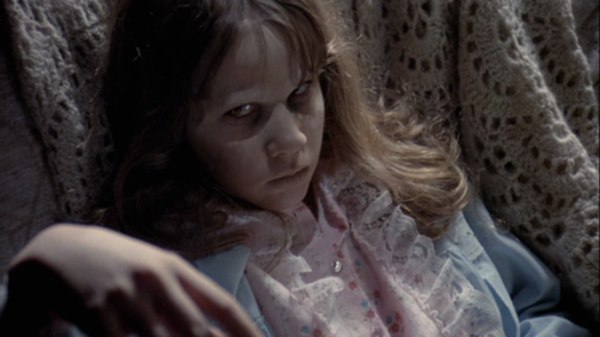 Foul-mouthed, vomit-spewing and body contorting Regan from the Exorcist shocked and horrified cinema audiences when the movie was released in 1973. In her defense, Regan was possesed by the demon Pazuzu and this was to blame for her truly shocking violent outbursts, but this is what made the movie all the more horrific. With her peeling skin and deep, booming voice, you can almost feel the tension and atmosphere of dread in the room when Fathers Karras and Merrin try desperately to exorcise the possessed child. Reagan looks and acts so far gone that it seems almost hopeless that she could return to being a normal child ever again (the sequel actually followed an adult Regan trying to come to turns with what happened to her as a child, but the less said about it the better). 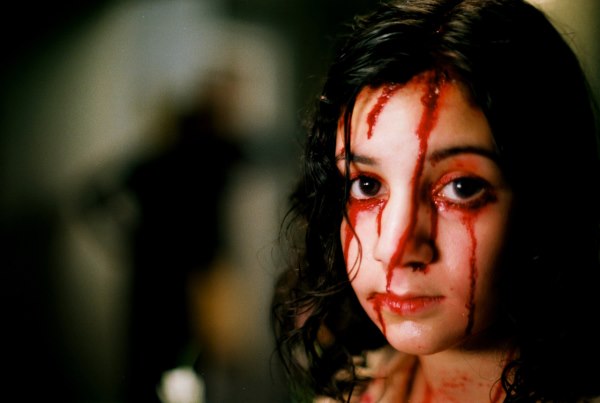 The character of Eli in Let the Right One In is an interesting paradox. On the surface, she seems like a relatively normal 12 year old girl and, although she initially acts withdrawn and distant, she seems to have child-like curiosity and playfulness. She is drawn to the bullied Oskar and the two eventually become close friends. However, it is revealed that Eli is actually a centuries old vampire with an insatiable blood lust. Eli is completely unlike most typical movie vampires. She snaps into a feral rage when she kills and there is something much more primal about her. Her seemingly innocent relationship with Oskar also seems destined for a bleak future. Oskar will age while Eli continues to look like a little girl and he, like Eli’s previous ‘partner’ Håkan, may enter into a cycle of hunting and violence as he attempts to procure future victims for Eli to feed on. 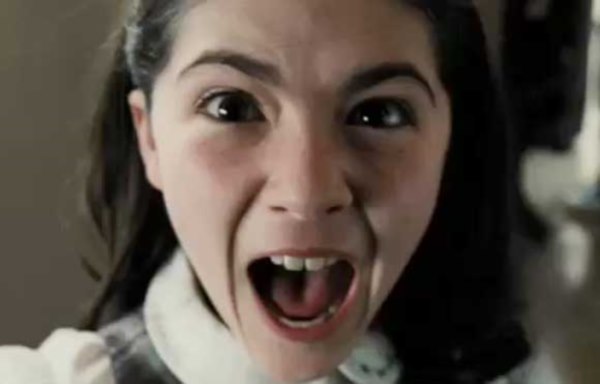 Orphan is an underrated psychological horror which follows two young parents who adopt a nine-year old girl when their own unborn child dies. The orphanage warns that Esther is a troubled young girl but that doesn’t prepare her new parents for what she is really like. Stalking around like a horror slasher villain, the movie goes to some seriously dark places and isn’t shy in showing child violence. However, one of the movie’s most shocking scenes is sexual in nature as Esther tries to seduce her new adoptive father. Although the twist is that Esther is in fact an adult suffering from a growth hormone disorder, Orphan still plays out like a creepy kid horror movie and Esther is brilliantly played by child actor Isabelle Fuhrman. 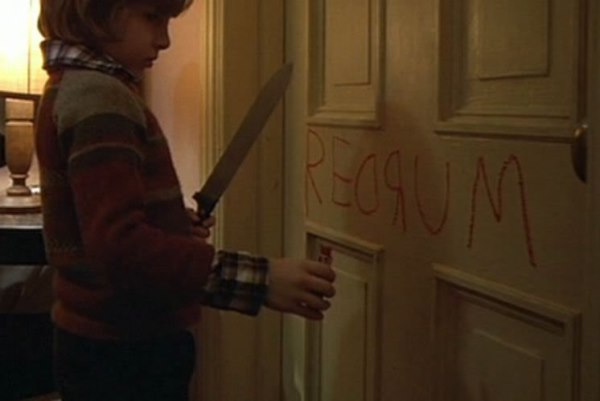 Forget about the bloody elevators, decaying old women and spooky ghosts, the creepiest inhabitants of the Overlook Hotel are the children. Poor Danny Torrance struggles to adapt to his new surroundings when his father takes over as the winter caretaker of the mysterious hotel and he finds that his previously untapped psychic powers are exacerbated by the Overlook’s supernatural environment. Danny’s behaviour becomes erratic and he slips in and out of strange trances while repeating REDRUM over and over in a disturbing, possessed voice, but there are even creepier child forces at play in the Overlook. While exploring the seemingly endless corridors in the hotel, Danny comes across two identical twins holding hands. Speaking in unison, the twins ask Danny to play with them “Forever and ever” before Danny sees flashes of their bloody corpses laying on the floor next to an axe. It’s hard to decide which is creepier; the disturbing, split second image of their hacked corpses or the out-of-place, calm sight of the girls standing at the end of the hallway. 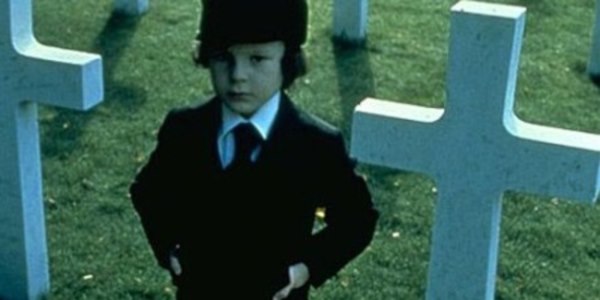 When it comes to creepy kids, it doesn’t get much bigger than the antichrist. Switched at birth with the baby of a high-ranking diplomat to ensure that he would be raised by powerful parents, Damien is protected by a hellhound and an occultist nanny and spends his formative years moodily staring at people. With his shark-like eyes and expressionless face, it’s actually quite surprising it took his father as long as it did to figure out that his son was actually the child of Satan (all those people dying when Damien was around should have tipped him off, too). Of course, the Omen is made all the more chilling because Damien survives in the end. The disappointing third entry in the series followed an adult Damien continuing down the path of evil as a successful CEO and later political ambassador, but he was at his creepiest as a young boy.