Robots have always played an integral part in science fiction. Even when filmmakers and screenwriters lacked any concept of the feasibility of computing and technology, they were ambitious enough to create machines which were as intelligent (sometimes more so) as their human masters. Even when these robots looked like nothing more than a trashcan with blinking lights, movies always made the most of the horrifying idea that these man-made machines could turn on their human creations. Whether they malfunction by accident or are programmed to be bad, evil robots on the big screen present a threatening and intimidating look at the future.

Built by the shady mega-corporation OCP as the latest advancement in private police control, ED-209 is a hulking killing machine. When ED-209 is revealed at the beginning of Robocop it malfunctions and accidentally fills an OCP board member full of lead. Later on when Robocop faces off against one of the machines, he incapacitates it by running down a flight of stairs. The ED-209 tumbles down and flails on the floor screaming, desperate to get up. Even though ED-209 is clearly flawed, there’s something about the robot that makes it iconic. Brought to life by jerky stop motion animation and wielding two ridiculously huge cannons, ED-209 is one of the coolest looking death machines in cinema.

Dr Evil knows the best way to get to super-shagging superspy Austin Powers is through his pants, so he creates an army of sexy fembots to lure the spy into a honey trap. Armed with breast-mounted machine guns, the fembots are no pushover. However, Austin proves that he can seduce any woman or machine. When cornered by the fembots Austin performs a striptease which turns them on so much that their heads explode.

Duncan Jones’ lo-fi sci-fi deliberately subverts expectations. Despite having a fairly ambitious setting and premise – an astronaut called Sam works alone on the moon mining gas with only a robot called GERTY for companionship – Jones doesn’t rely on big set design or special effects and turns in a surprisingly effective, minimalist sci-fi movie. The same can be said in his approach to the classic ‘deceitful robot’ trope. With his soothing, placating voice (supplied by Kevin Spacey) and ability to communicate only through simple emoticons, GERTY seems like a relative of other psychopathic cinematic robots. However, it is ultimately revealed that even though GERTY has been certainly programmed with deception in mind, he is willing to find a loophole in his programming (and even volunteer to have his memory erased) to help Sam.

Virtuosity is a largely forgotten sci-fi thriller about a computer program called SID 6.7 which is made up from a composite of 183 serial killers. Of course, SID somehow manages to escape from his virtual environment and enter the real world where he starts wreaking havoc as a regenerating android. Like most 90s sci-fi movies, Virtuosity has a very tenuous grasp of technology and computers, but it is worth watching for Russell Crowe’s scene-chewing performance as SID. None of it really makes sense, but Crowe is clearly having fun playing the super powered psychopath. 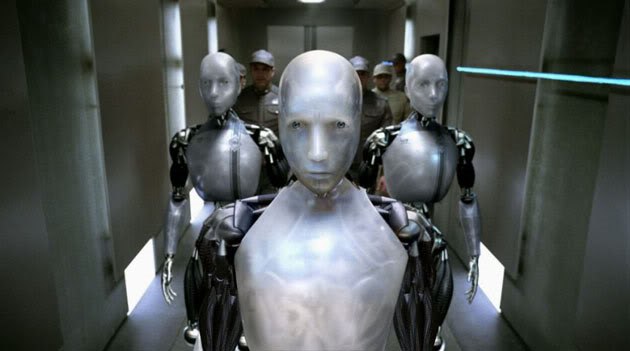 Inspired by sci-fi writer Isaac Asimov’s three laws of robotics (robots can’t harm humans, they must obey humans and they must protect their own existence as long as they don’t violate the first two laws), I, Robot is set in a future where robots are ubiquitous servants who carry out menial jobs and tasks for their human owners. Inevitably, the robots realise that the laws they are bound by can be interpreted differently than they were originally intended and a huge robot uprising takes place. Plenty of movies feature robots which learn humanity along the way or turn renegade but I, Robot does it on a huge scale. The final action set piece of the movie shows swarms of robots taking to the streets and attacking their supposed masters, and the movie is a bleak cautionary tale of technology gone wrong.

With four movies under its belt (and a fifth on the way), The Terminator franchise has greatly expanded its original premise of a world that has been taken over by an out of control artificial intelligence system called Skynet. However, although each sequel upped the ante and promised bigger action set pieces and more backstory to the machine uprising, the original Terminator is still the best. In the future, the human revolution is led by soldier John Connor. So, in an effort to ensure Skynet will win, the intelligence system sends a robot assassin back in time to kill Connor’s mother. Arnold Schwarzenegger plays the T-800 robot with intense menace. At times The Terminator feels more like a horror than a sci-fi movie as the machine stops at nothing to get to Connor and kills anyone who gets in his way. It is even more terrifying when it is stripped down to its metallic endoskeleton. Schwarzenegger reprised the role as a good guy in two subsequent sequels but the T-800 is at its best when he’s playing the psychopath.

Westworld is a cult classic from the 1970s which features killer robots running amok in a futuristic theme park. Rich customers who want to sample the delights of Roman, Western or Medieval themed worlds can pay a high admission price to visit the high-tech theme park Delos. Each themed world features androids who have been programmed to simulate these bygone eras but when a computer virus starts spreading through the system, the machines overwrite their programming and begin targeting guests. Homaging his character from the Magnificent Seven, Yul Brynner puts in a cold-blooded performance as the remorseless robotic gunslinger who pursues protagonist Peter as he desperately tries to escape the park. 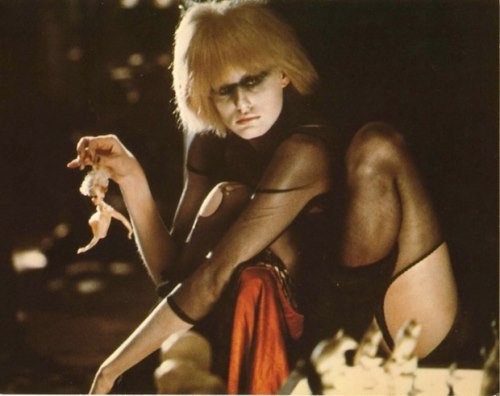 Although the replicants in Blade Runner are technically genetically enhanced humans not made up of cogs or microchips, the movie constantly challenges our conception of humanity. Like robots, replicants are originally created to fulfil certain roles; some are combat models who have been created for fighting, while others are pleasure models, created for carnal desires. However, they are deliberately dehumanised like machines so humans can more comfortably use them for their own purposes. Protagonist Deckard (played by Harrison Ford) is tasked with hunting down four renegade replicants who have come to earth in an attempt to extend their life spans. One of these replicants is Pris; a deadly, unhinged pleasure model who knows how to use her sexuality to her advantage. Wearing bizarre make-up and exuding a primal determination to get what she wants, Darryl Hannah perfectly bring the robot femme fatale to life.

One of the eeriest sequences in sci-fi horror classic Alien doesn’t have anything to do with the deadly Xenomorph creature running havoc aboard the Nostromo spaceship. The revelation that inscrutable science officer Ash is not human at all but in fact a duplicitous android is a huge moment, and it forces the audience to reconsider what he has been doing up until that point in the movie. On subsequent viewings of Alien it is much clearer that he is an android who is following the orders “Bring back alien life form. Crew expendable” (he’s a new arrival to the ship, he insists that the crew investigate the distress signal on LV-426 and he doesn’t hesitate in breaking quarantine protocol by allowing Kane back onto the ship when he has a face hugger attached to him). However, the twist is shocking because it is in defiance of the typical depiction of robots from this era of cinema. Ash doesn’t have any whirring motors or flashing lights attached to his body. Rather, he looks and acts like an unassuming (if a bit creepy) normal person so that he can fulfil his original programming; even if that means killing the rest of the crew to do so. 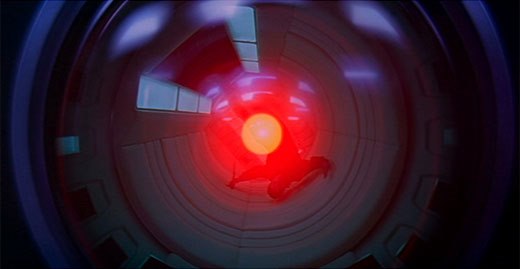 HAL 9000 is the definitive evil movie robot. Like some of the other robots on this list, HAL is driven to non-compliance and disobedience when it thinks that human interference may prevent it from completing its prime directives. However, unlike other movie robots the defiance of HAL is made all the more creepy by its simplicity. Lacking the human features of an android or the exposed circuitry and machinery of a traditional robot, HAL’s interface is conveyed by a simple red light. Communicating with a quiet, conversational voice, HAL does not seem like a threat at all. However, the computer is able to control the entire spacecraft and is calm and deliberate in its lethal actions. Like an omniscient God, HAL knows that the astronauts are plotting against it and he does not hesitate to kill the threat.