John Fitzgerald Kennedy, the 35th President of the United States, was shot and killed by an assassin, Lee Harvey Oswald on the 22nd November 1963. JFK was the first US politician to embrace the wonderful new technology that was television and many analysts claim that he won at the polls because he was better-looking and more charismatic than his rival. It is perhaps ironic that his assassination too ended up on the television. The death of this controversial, charismatic and well-loved president has been responsible for hundreds of conspiracy theories: ideas that range from the utterly ridiculous to the scarily plausible. 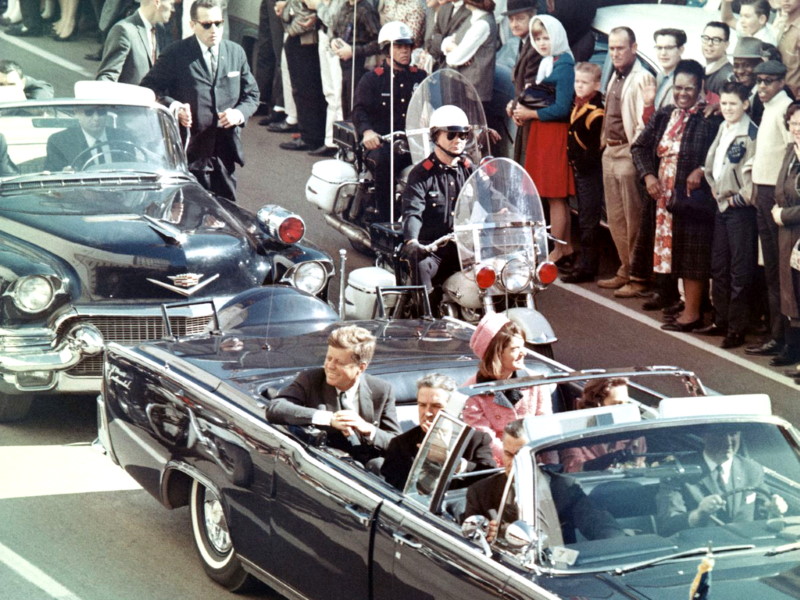 In the aftermath of the assassination, and as the many conspiracy theories began to blossom and grow, dismayed researchers found that potential witnesses: as many as 103 people were ‘conveniently’ dying, often before their stories could be questioned in depth. It can be said that the first and most dramatic of these ‘convenient’ deaths in the aftermath of the shooting is that of Lee Harvey Oswald’s shooting by night-club owner Jack Ruby! Other people on the list included a Klansman by the name of Joseph Milteer who is said to have claimed that Kennedy’s end was ‘in the working’; Rose Cheramie, a known addict and alcoholic who had worked for Jack Ruby and apparently knew that Kennedy was to be assassinated before the event; and journalist Dorothy Kilgallen who had apparently scored an interview with Jack Ruby; and many others, some of whom have a clear connection to the Kennedy case, while others are more obscure. The list of 103 has been pooh-poohed by authorities who point out that the list of all the witnesses from which the 103 were culled held over 10,000 names, adding that at least half of those who died did so from verifiably natural causes, while the rest were accidental.

9. The bodyguard did it! 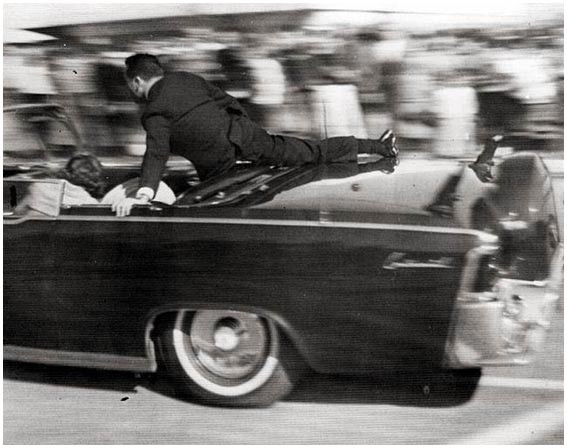 One conspiracy theory ran that one of the secret service agents accidentally discharged his firearm, killing the President. This theory was published and was quickly refuted and the agent in question sued the author and won. As nearly all the witnesses heard three shots, this would seem to invalidate this theory even before it was immortalised on paper, as no-one could ‘accidentally’ fire a handgun three times in a row, especially not a trained and vigilant Secret Service agent!

It is an accepted fact that Lee Harvey Oswald lived in Russia for a time, bringing his beautiful Russian bride ‘home’ to America. He was reported unhappy in the States, and longed to return to the USSR, but wanted to be a person of importance, not a regular working Joe as he had been on his last stint in the country. Oswald is said to have visited the Russian consulate in Mexico City, pleading for a visa to ‘return to the arms of Mother Russia’. This visa request was declined, and Oswald would shoot President Kennedy a mere 55 days later. Given his history with the USSR, many people believe that Oswald did not work alone, but in fact was under direction of the USSR. The assassination was said to be Khrushchev’s way of regaining face after the humiliation of the Cuban missile crisis.

There were rumours abounding that the Mafia and other organised crime organisations helped JFK’s father, Joe Kennedy, get JFK elected in the first place: as an Irish-Catholic JFK was an unpopular choice with the ‘establishment’ of the time. Once in power, and perhaps unaware of what they owed to the assistance of organised crime, JFK and his brother, Attorney General Robert (Bobby) Kennedy, began to crack down on these criminal powers. The Mafia is also said to have had links to Cuba, the recent victim of the Bay of Pigs fiasco, for which Kennedy was deemed responsible. Jack Ruby, the nightclub owner who killed Lee Harvey Oswald, is hinted to have had Mafia connections too, and records show a significance increase (25 times as many!) in phone calls between Ruby and known Mafia associates in the months before the assassination. Ruby is said to have attempted to confess to having Mafia involvement while in jail.

JFK was said to be unhappy with the CIA, apparently stating, ‘I want to splinter the CIA into a thousand pieces and scatter it to the winds.’ This statement, along with unhappiness at Kennedy’s actively seeking to make peace with the USSR, was allegedly enough for the CIA to draw up his death warrant. These claims are periodically renewed whenever a writer, journalist or other investigator is stonewalled in their search for information and answers: surely if the CIA were completely innocent they would let the world see their files?

Two separate members of law enforcement (the two were the first on scene in the book depository following the shooting) submitted written statements that claimed that the weapon they found was a Mauser 7.65. Oswald was known to own an Italian rifle, a 6.5 Carcano. In subsequent reports and evidence the mention of the Mauser was removed and the only weapon mentioned thereafter was the Carcano. This discrepancy was explained away later on, when investigators decided that the officers must have thought that the weapon was a Mauser, rather than the less common Carcano, until technicians had time to examine the weapon and give it its proper name. This does not explain why one of the officers claimed that he saw the words ‘Mauser 7.65) stamped on the barrel of the weapon, and this has formed a basis for a whole conspiracy theory to form around the weapon used in the assassination!

Many of the documents pertaining to the assassination are still under lock and key, only due to be released in 2029. Many of the documents that have already been released have been heavily redacted, making them very hard to read and understand fully. Conspiracy theorists are convinced that this deep secrecy is a sign that there is much that we do not know about the assassination: being proof of something to hide. Whether they are right or not will only be revealed to future generations, by which time any potential suspects could well have died of nature causes…

The second bullet, which passed through Kennedy’s body and then into Governor Connally, has been called by some theorists ‘the magic bullet’. This is because the bullet fragments collected seem to make up more than the original weight of the bullet: and that is without having access to those few fragments which remained inside Connally’s body. Connally survived, finally dying in 1993, at which point there was a minor clamour for the fragments of the bullet to be retrieved so that this point could, for once and for all, be laid to rest. Connally’s family, under no obligation to provide the fragments, declined the request, preferring to lay their loved one to rest without mutilating his body first. Had the ‘magic bullet’ been found to definitely have too much mass, this would have potentially laid waste to the single gunman theory which became the accepted version of events.

The Zapruder film is the piece of footage that most people have seen at one time or another. Abraham Zapruder was in a good position to film the President’s motorcade as it passed by, and he had no idea how important his few seconds of footage would be to history. (He captured the assassination in grisly detail and his is the only film to feature the gory details of the head wound. After officials had taken copies of the film for examination, media interest in the film was high. Zapruder reluctantly allowed the media to buy the film, but had a nightmare about seeing the words ‘See the President’s Head Explode’ featured in Times Square, and asked that that particular frame be excluded from any broadcast.) CBS’ Dan Rather was the first anchor-man to talk through the footage when it did appear on TV and he is actually believed to be responsible for starting off many conspiracies due to inaccuracies in his reporting. However, the film has varied from being a conspiracy theorist’s best friend to being claimed to be a massive hoax and forgery. Still others dispute the accepted claim that the Zapruder film shows a ‘complete’ record of the assassination. Zapruder is alleged to have stopped filming for a few seconds, when the police motorbikes were in view, and only recommenced shooting when the motorcade was fully visible. Some theories claim that Zapruder, therefore, could have actually missed the first shot: the one that missed the President, motorcade and everything. This first botched shot has been a puzzle to investigators since the event and some say that a more complete video record of the event might have supplied all the answers.

1. Lee Harvey did not work alone 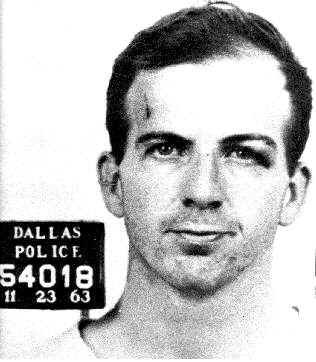 There are a number of theories that run along these lines. Some conspiracy theorists claim that Harvey was in the employ of one of a number of groups for whom the President was making life uncomfortable. Other ideas say that the bullets that killed JFK were not fired from Oswald’s position in the window of the Texas Book Depository but rather from the mysterious nearby ‘grassy knoll’. The knoll was on the side of the road away from most of the spectators and there is a belief that the gunman could have easily slipped over a nearby wall and made a swift exit from the area, probably before most people could even come to grips with what they had just seen. Examination of photographs and film footage of the event shows spectators on the knoll, and it seems unlikely that none of them could have witnessed the killing of their President and never ever said anything about the shooter being so close to them, but conspiracy theorists insist that it is perfectly possible.

Top 10 Most Badass Persons from History