History has seen a terrifying selection of torture techniques being used to deliver punishment to unlucky victims. Some torture methods were never meant to be survived and they offered agonising, unbearable pain during the final hours – or final days – of their recipients. Others served up crippling but survivable disfigurements so that those who had been punished were seen as walking deterrents for the crimes that they had committed. 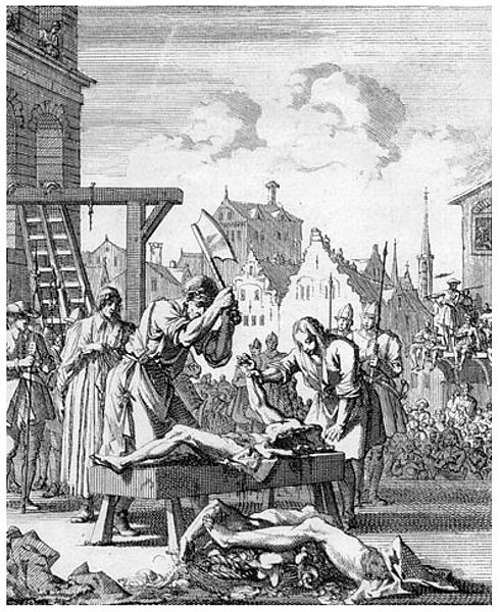 First recorded during the reign of Henry II in 1241, this excessive form of torture/execution was reserved for those who had committed the worst crime of all – high treason. The victim was first hanged in the public gallows but cut down from the rope before they choked to death. They were then castrated and disembowelled by an executioner who made sure that they were still alive to see their organs removed from their own body and thrown into a fire. After their heart had been removed, the victim was beheaded and had what was left of their body cut into four pieces so they could be sent to different parts of the kingdom as a horrible warning. The head was reserved for impalement and display at a prominent public place, such as London Bridge. 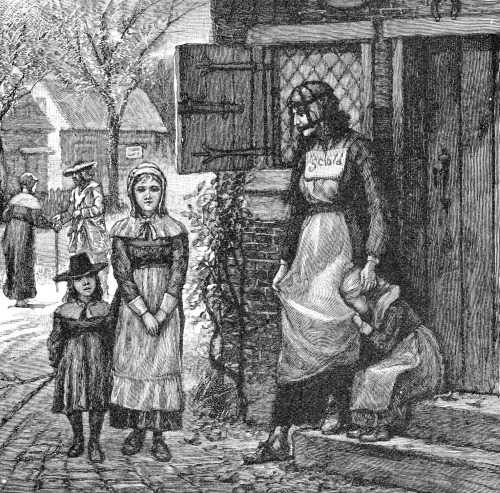 Torture wasn’t just reserved for serious offenses. In fact, if you were a woman living in the medieval ages you could be punished for gossiping or committing ‘idle talk’. The Scold’s Bridle was a device which was fixed to the victim’s face and made talking (and even eating) impossible without causing severe pain. The mask contained a spiked bridle which fit inside the victim’s mouth so they couldn’t talk without piercing or lacerating their tongue and mouth. The Scold’s Bridle was hugely uncomfortable if the wearer was forced into it for a long period of time, and it was often accompanied by a public spectacle so the victim could be paraded around the town centre wearing their punishment for all to see. 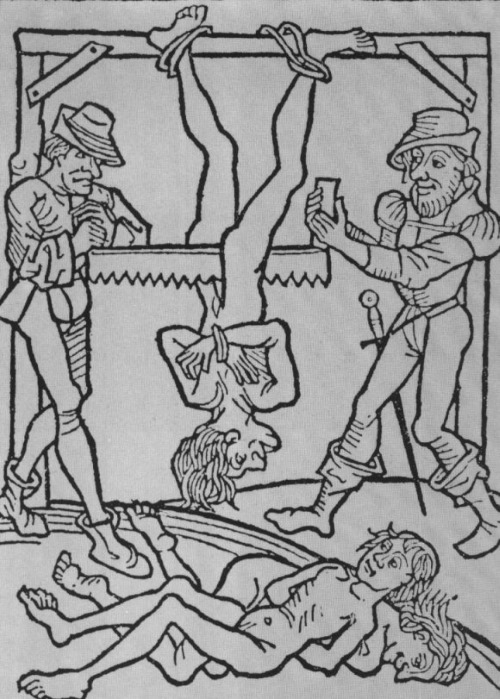 Dismembering a person limb by limb has been a popular and grisly way to torture, punish and execute people in different cultures and societies over the years, but some methods were much worse than others. The two handed saw was often used to cut a person vertically down the middle. The victim was usually hung upside down between two poles as executioners gripped either end of a huge saw and cut back and forth down through their body, starting at the groin. Most victims were alive and conscious for a long time during this ordeal – even as their innards and organs became exposed. Some executions started at the skull and moved downwards from the top of the body, offering a quicker but still horrific way to die. 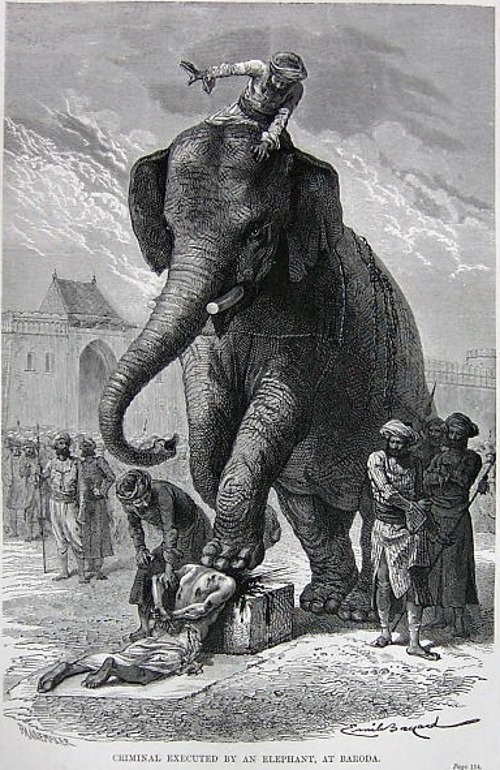 Crushing or pressing a person’s body parts was a common punishment throughout Europe and briefly in America during the country’s witch trials. Usually heavy stones or weights were gradually added as the victim lay underneath a door or board, but there were also devices like ‘the boot’, ‘head crusher’ and the ‘brodequin’ which could crush and completely dismember a specific limb or body part as they were gradually tightened. However, one of the strangest crushing methods in history comes from India and South Asia. Elephants were often used as a way to trample victims to death and some creatures were specially trained to gradually put their weight down to prolong the torture. The elephants usually had a trainer sitting on their back to control them and, in some cases, issue a reprieve from death if the victim had been tortured enough. Some historical accounts also describe elephants equipped with blades on their tusks easily tearing victims apart and others using the power of their trunks to pluck limbs straight from a body. 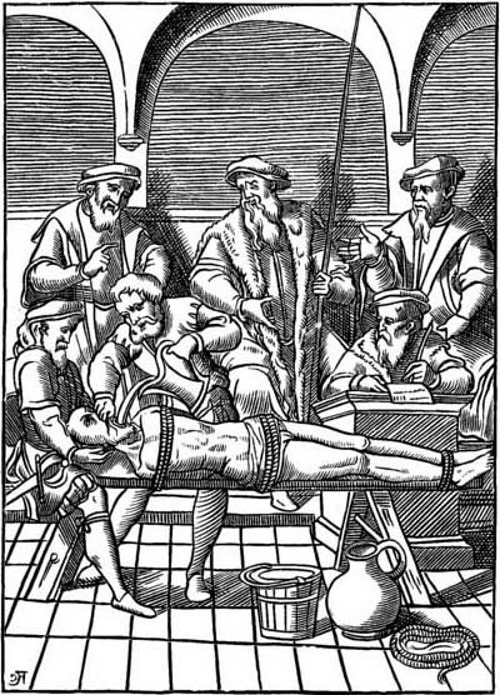 The concept of water torture is most commonly associated with the practice of dunking accused witches to see if they float or, in more recent times, waterboarding. However, one other technique used throughout history was force feeding victims mass quantities of water until they were bloated and in severe physical pain. In France this was called being “put to the question” and some victims could be forced to drink up to 16 pints of water during the ordeal. It was an extremely painful form of torture and if the victim wasn’t subsequently killed by some other method (some executioners would turn them on their back and jump repeatedly on their stomach) they were likely to die from water intoxication.

5. The Pear of Anguish 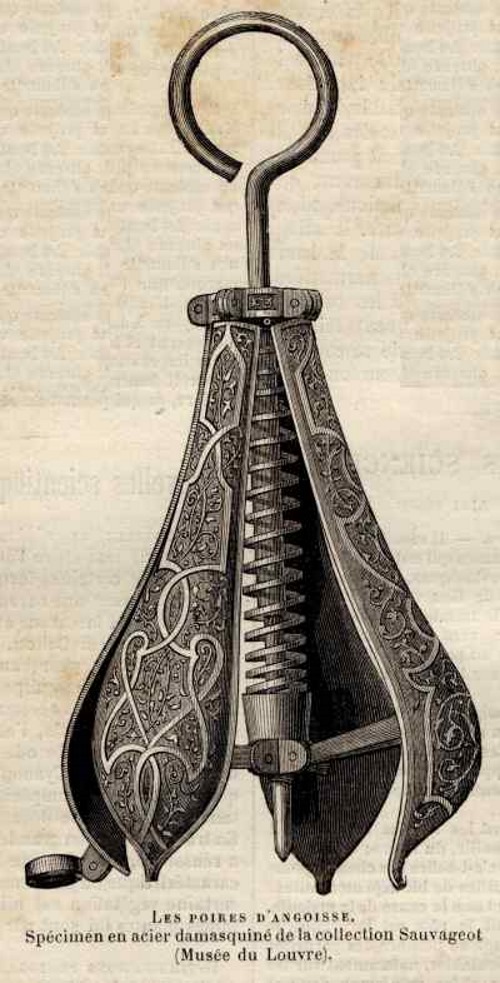 Although it looks like a cross between a pear and a blooming flower, The Pear of Anguish was actually a horribly ornate instrument of torture which was either inserted into the victim’s mouth or anus. When it was forced into either orifice the handle on the bottom of the device could be turned so that the ‘petals’ spread outwards and caused unbearable tearing and mutilation. 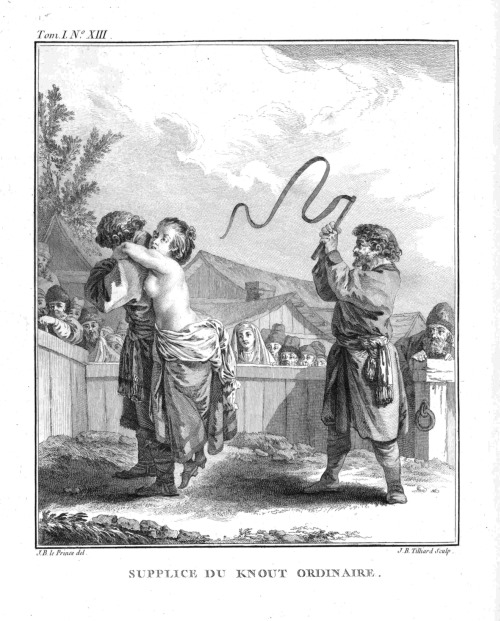 The ‘Cat o’nine tails’ was a popular form of public and ceremonial punishment used by the British Royal Navy. The whip consisted of several cotton cords with knotted thongs at the end so that it delivered multiple lashings with one strike. Although it was undeniably painful, the Russian alternative was much nastier. Similar to the Roman ‘scourge’, the Knout was a much heavier multiple-tailed whip made from leather instead of cotton. At the end of each whip was a small hook or wire which dug into the skin and caused horrific injury when it was yanked out of a victim’s flesh. To make the beating even worse the Knout was sometimes soaked in freezing water before it was used. 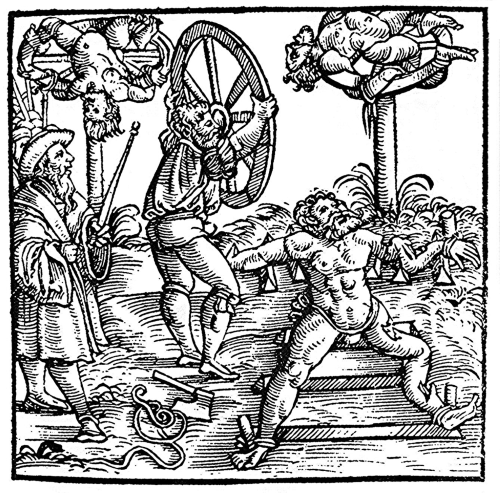 The Rack is perhaps the most recognisable torture device from the medieval period. Used throughout Europe and commonly associated with the Spanish Inquisition, victims were attached to a winding mechanism and stretched in opposite directions so that their ligaments tore and their limbs stretched and popped out of their sockets. The Breaking Wheel was a similar torture method but unlike the Rack it was often used in public and it was probably a much more grisly and painful way to die. Victims were lashed to a huge wheel and had their limbs stretched out as far as possible. They were then beaten and bashed with a club or heavy blunt object and, because of the way their limbs were positioned in between the spokes of the wheel, their bones were much easier to break. Victims had their bodies smashed and mangled into almost unrecognizable shapes before they were allowed a merciful ‘killing blow’ to the head or neck. However, some victims weren’t so lucky and were left to slowly die from their horrific injuries. 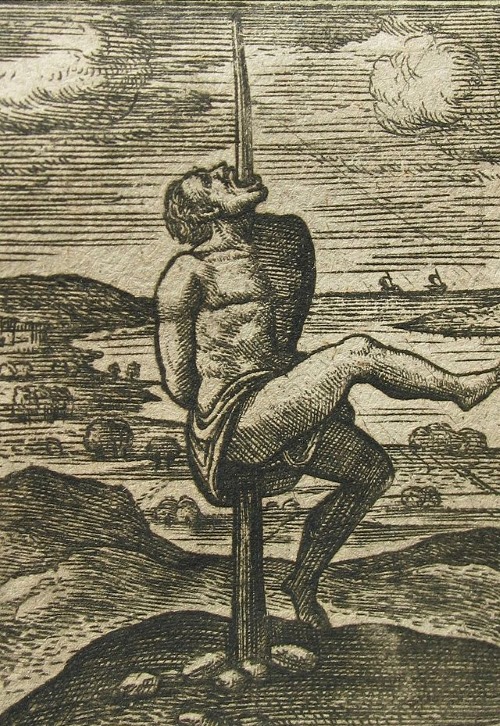 Vlad III was one of the most barbaric leaders in history. Ruling Wallachia (now Romania) from 1456 to 1462, Vlad had a notorious reputation throughout Europe for his cruelty. His torture method of choice? Impalement. Vlad killed countless victims by impaling them through the abdomen or chest and leaving them to die on a vertical stake which had been erected in the ground. However, although this was an agonising way to die, he also devised a much more sadistic method of impalement. It is believed that Vlad impaled some of his victims on a much duller, rounded stake which was oiled and inserted into the anus. The victim was lashed to the pole so they couldn’t move and were then hoisted to a vertical position. They were left to die in agonising pain as gravity did its work and they slowly slid down the stake. Vlad wasn’t the first person to use impalement against his foes, but the huge scale in which he committed these atrocities – 20,000 impaled corpses of ‘prisoners of war’ outside the capital of Târgoviște acted as a pretty effective psychological weapon against his enemies the Ottoman Turks – ensured that he would forever be known as Vlad the Impaler.

If the history of torture has taught us anything it’s that people know how to get creative when they’re being sadistic. Scaphism – derived from the Greek “skaphe” which means to hollow or scoop out – was a form of torture/execution invented by the Persians which involved stripping a victim naked and fastening them inside a boat with their limbs and head protruding from holes. Another boat was placed on top so that the victim was entombed and they were then fed milk and honey to induce diarrhea (some were also slathered with the mixture all over their body). They were floated out onto a hot body of water or a stagnant pond so that the smell of feces would attract insects to settle inside the makeshift tomb and start attacking/burrowing inside the victim’s flesh. The boats were often reeled in to the shore so the victim could be fed more milk and honey, and it could be days before they died from sunstroke, blood poisoning, organ failure or starvation. When the dead victim was finally removed from the boats, onlookers gathered to see the horrific sight of the bloated, distended corpse festering in a bed of rotting flesh, filth, insects and feces.