Originally formed in 1995, The Black Eyed Peas found major success after the turn of the 21st century, emerging as one of the biggest music groups of their generation. The band consists of will.i.am, Fergie, Taboo and apl.de.ap. Fergie’s vocal talents and will.i.am’s production skills are central to their success and the BEPs are known for mixing elements of hip hop, R&B, dance and pop music. 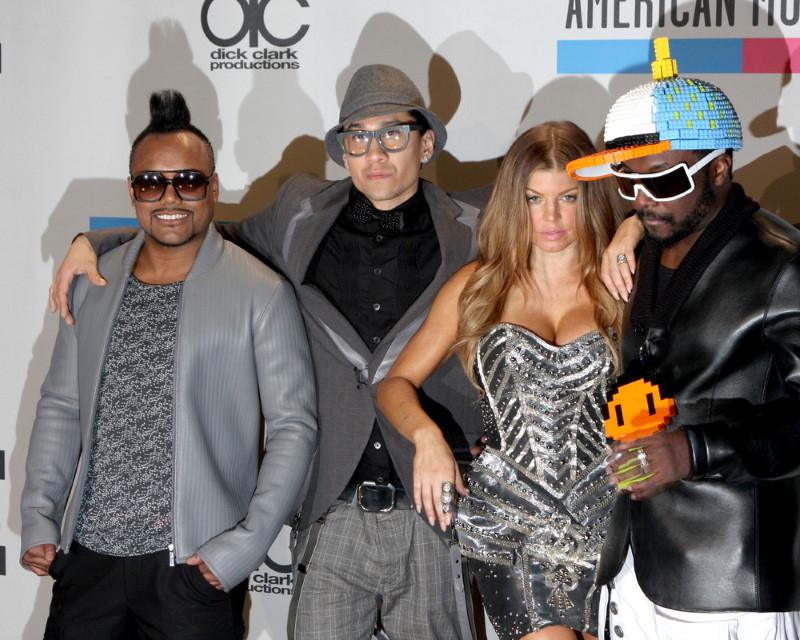 Their string of worldwide hits has earned them a place amongst the most downloaded music artists of all-time and in total, their record sales are estimated to exceed 50 million units worldwide. Below, we look at their top 10 songs.

The biggest commercial success to come from the Black Eyed Peas’ ‘Monkey Business’ album, ‘My Humps’ is a catchy single, which reached number 3 on both the US Billboard Hot 100 and the UK Singles Chart. However, it received some criticism for its sexually suggestive themes.

Featured on the group’s ‘Elephunk’ album, ‘Shut Up’ was never released as a single in the United States, but became a major hit in many European countries, topping charts in Germany, France and Spain and reaching number 2 in the UK. The track is notable for being one of the first songs recorded with Fergie, as the Black Eyed Peas had previously existed as an all-male trio.

Written by will.i.am and British reggae singer Tippa Irie, ‘Hey Mama’ was released as the third single from ‘Elephunk’. It was a moderate commercial hit, reaching the top 10 in the UK, Australia, Germany and Italy and was popular amongst fans for its unique sound.

A major hit in the U.S., reaching number one on the Billboard Hot 100 in early 2010, ‘Imma Be’ received widespread praise from music critics, with many calling it the best track on the group’s 2009 album, ‘The E.N.D.’. However, despite huge success in America, it never received a full single release in many countries around the world. Nonetheless, it almost reached the top 50 of the UK Singles Chart based on downloads alone during its limited promotional release.

Winner of a Grammy Award for Best Rap Performance by a Duo or Group in 2005, ‘Let’s Get It Started’ was a re-working of the track ‘Let’s Get Retarded’, which appeared on their ‘Elephunk’ album. Despite failing to make the top 10 of either the Billboard Hot 100 or the UK Singles Chart, the song was well received by critics. In addition to its one Grammy win, it was nominated in the Record of the Year and Best Rap Song categories.

A chart topper in both the UK and Australia, ‘Meet Me Halfway’ was released as a promotional single for ‘The E.N.D.’. The track is a ballad, on which Fergie takes the clear lead and the singer said that she took inspiration from Madonna when recording her vocals.

Featuring a surf music sample made famous by the Quentin Tarantino film ‘Pulp Fiction’, ‘Pump It’ was released as the fourth single from ‘Monkey Business’. Although it only reached number 18 on the US Billboard 100, it was a bigger success in the UK, peaking at number 3 and becoming the first single in history to reach the top 40 on downloads alone.

The lead single from ‘The E.N.D.’, ‘Boom Boom Pow’ has a futuristic, electro sound and an unconventional chorus. According to will.i.am, the track was originally intended for use in underground clubs, rather than radio. However, it became a mainstream hit around the world, giving the group their first number one in the Billboard Hot 100 and reaching the top of the charts in countries like the UK, Canada and Australia.

The group’s first mainstream success, ‘Where Is the Love?’ features uncredited vocals from Justin Timberlake and touches upon important social topics, including war, terrorism, gang crime, racism and intolerance. The track eventually received two Grammy nominations, including one for Record of the Year and topped the singles charts in the UK and Australia, becoming the UK’s best-selling song for 2003.

Released as the second single from ‘The E.N.D.’, ‘I Gotta Feeling’ became The Black Eyed Peas’ most successful song of all-time. It topped the Billboard 100 for 14 consecutive weeks, peaked at number 1 in the UK and sold more than 15 million units worldwide, making it the best-selling digital single ever. The track eventually received the Grammy for Best Pop Performance by a Duo or Group.