Dubai has seen some truly astonishing urban growth in the last 30 years. Although the city has long been an important port and trading hub, Dubai managed to become a modern metropolis and the most expensive city in the Middle East. Oil money and heavy investment in real estate have seen columns of skyscrapers erected throughout the city, and some of the most lavish construction projects conceivable are making their stake (or at least they will be when building work is finally finished) in this new economic and tourist hotspot. The dazzling city has had some outlandish rumours attached to it in recent years and, remarkably, some of them happen to be true.

10. The Police Drive Around in Sports Cars

Dubai really likes to make an impression, even when it comes to outfitting its local police force. The city’s top of the range fleet of police cars includes McLarens, Lamborghinis, Aston Martins, Bentleys and Ferraris. Painted in the city’s white and green colours, the cars make for a startling sight as they patrol some of Dubai’s many highways in pursuit of speeding lawbreakers. However, the vehicles act mainly as a deterrent for would-be speedsters and they are typically found patrolling tourist areas where officers issue tickets for parking and other lesser motoring offences.

9. There are Gold Vending Machines 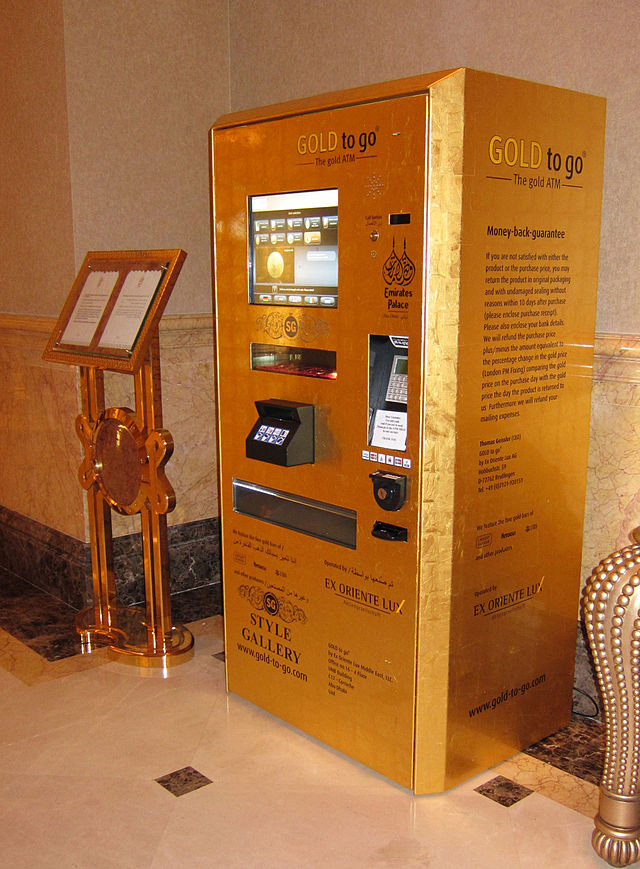 Nothing says ‘disposable income’ like buying gold from a vending machine. The ‘Gold to Go’ machines dispense gold items – bars, jewellery, customised coins – in exchange for market value prices (the machines have an Internet connection and their prices are updated every ten minutes). Some of the gold items come in attractive gift boxes and all are dispensed with a certificate and an anti-counterfeit hologram label. Although Dubai isn’t the only place in the world to house Gold to Go machines, these gold-leafed novelties feel right at home in the over-the-top indulgence of the city.

8. Its Founding Father was Sceptical of the City’s Long-term Plans

Economists are eyeing the prosperous situation in Dubai with scepticism. The city was rocked by the 2008 global recession and its real estate projects stagnated as investors and financial institutions held back from pouring in more money. Although construction projects have resumed in recent years and the city’s excesses are nothing like their pre-crash levels, some say the supply and demand of the real estate market in particular is very risky. A famous quote attributed to Rashid bin Saeed Al Maktoum – who ruled Dubai for 32 years from 1958 until 1990 – was: “My grandfather rode a camel, my father rode a camel, I drive a Mercedes, my son drives a Land Rover, his son will drive a Land Rover, but his son will ride a camel”. The famous line referred to Dubai’s reliance on oil and the city’s need to transform its infrastructure and economy. However, it proved to be a prescient warning when the bubble was at risk of bursting completely in 2008 and Dubai’s financial outlook appeared to be very grim. Although Dubai is less reliant on oil trade and now primarily depends on commerce, tourism and other services, it will be interesting to see what the future holds for its economy and if it has learned anything from the 2008 crash.

During the city’s pre-2008 property boom, Dubai was dubbed the crane capital of the world. The skyline was peppered with huge towering cranes as construction projects ran riot throughout the city. The statistic – which amounted to around 30,000 of the world’s 125,000 cranes – was a startling indication to just how much construction and expansion was being carried out in the city before the financial crash. With the economy back on the rise and with more projects underway, cranes and other construction machinery are making their mark in Dubai yet again, but it is doubtful they will reach the same ubiquitous levels as they did in the past.

The UAE has a zero tolerance policy on drugs. Serious drug trafficking charges are punishable by death and even residual traces of illegal narcotics can result in a lengthy spell in prison. In fact, the UAE even considers the presence of illegal drugs in a person’s blood stream as a count of possession. Unfortunately, some tourists in Dubai have found out the hard way just how seriously the country takes drug-related offences. A Swiss tourist received a 4 year sentence when police allegedly found poppy seeds on his clothing and a Briton received the same sentence when less than 0.003g of cannabis was found in the tread of his shoe at Dubai airport. In 2013, three British tourists were pardoned from their 4 year drug sentence in a Dubai prison after 3 months. The men alleged that they had been tortured, tasered and beaten throughout their sentencing process in Dubai.

5. Dubai is Building the Most Extravagant Entertainment Park in the World

Disney has been eyeing the Middle East as a growing market for its entertainment products for years, but the company announced that it has no plans to open one of its theme parks in the area. However, Dubai is undeterred by this development (or lack of development) and the city has plans to outdo Disney with its very own Dubailand. Construction on the project started in 2003 but it was forced to pause in 2008 when the financial crisis hit. Production resumed in 2013 with an eye for a 2020 opening (the year Dubai is hosting the World Expo) and it was reported that the project cost had ballooned to an estimated $55 billion. However, this is really no surprise as Dubailand is planned to be twice the size of Walt Disney World Resort and it will house multiple theme parks, retail and entertainment outlets, hotels, sporting attractions and many, many hotels in its 107 square mile plot of land.

4. Dubai has a Seven Star Hotel (Kind of) 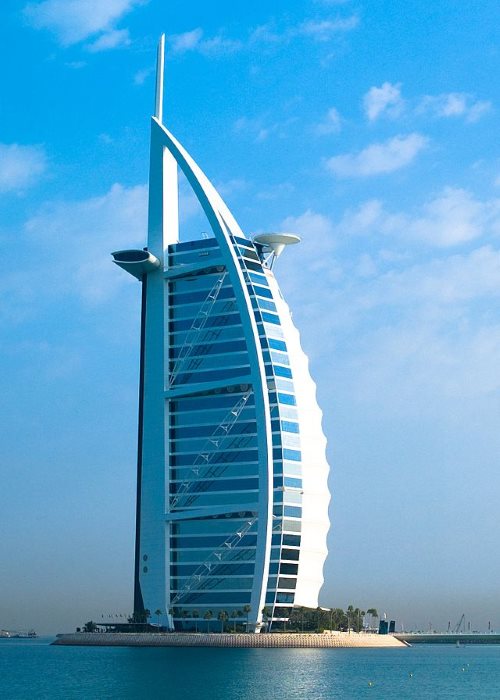 Many people think of the Burj Al Arab as the world’s first seven star hotel. However, while it’s true that the Burj is certainly one of the most luxurious hotels a person could ever hope to stay in, the seven star rating is misleading as it doesn’t actually exist in any hotel classification system. The hotel is adamant that it has never used the term itself and attributes the mistake to a British journalist who stayed in the Burj when it first opened in 1998. Stating how glamorous and luxurious the Burj is even when compared to other five star hotels, the journalist quipped that it is more like a seven star hotel. The quote apparently stuck in the years since. Nevertheless, the rating is popularly associated with the hotel and some still presume that the extravagant guest services that the Burj has on offer – which includes gold plated iPads, caviar facials, a chauffeur-driven Rolls Royce and servant in every room – somehow supersede the hotel rating classification system. Although it was originally a mistake, it is clearly one which has helped the Burj from a marketing viewpoint over the years.

3. The City will be Home to an Underwater Hotel

The Hydropolis will be world’s first multi-room underwater hotel and also one of the most expensive hotels even built. The lower levels of the huge, jellyfish-shaped hotel will contain suites which are situated 20m under the Persian Gulf, and the Hydropolis will also be home to many luxury amenities such as a grand ballroom, cinema, bars and beauty spas. Sadly, like so many of Dubai’s most ambitious projects the hotel is currently under construction and it’s facing an uncertain future as it tries to find investment and funding so it can finally be completed.

2. The City has Man-Made Islands 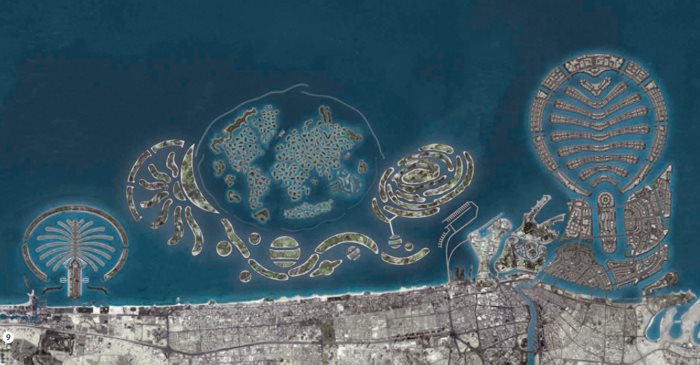 One of the most impressive landmarks in Dubai is its artificially constructed islands. Created by dredging up sand from the bottom of the Persian Gulf and spraying it out from huge dredging ships, the two Palm Islands are appropriately shaped like palm trees and are truly a breath-taking sight in a city which offers so many architectural marvels. Unsurprisingly, they are a coveted real estate hotspot as well as one of Dubai’s most popular tourist attractions.

1. The Height of the Burj Khalifa Caused a Fasting Dilemma during Ramadan

With a height of 2,722 ft., the Burj Khalifa skyscraper is the tallest man-made structure in the world. The habitable half-mile tower is so tall that Muslims who live in the upper floors have to wait longer to break their fasting during Ramadan because they can see the sun for longer than those who are on the ground. Dubai’s clerics advised residents above the 80th floor to wait an extra two minutes and those above the 150th floor to wait an extra three minutes before they broke their fast during the holy month.

Top 10 People with the Highest IQ

Top 10 Conspiracy Locations in the World