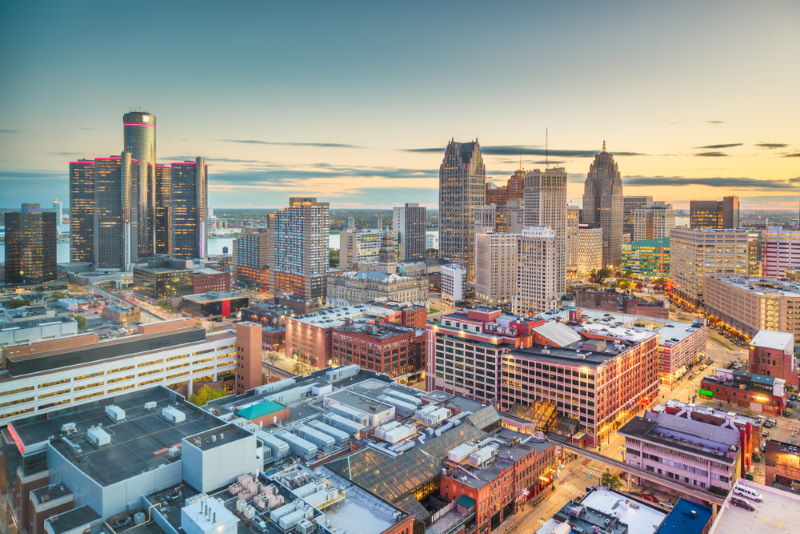 Michigan is a state in the northeastern United States, bordering four “Great Lakes” (Lake Superior, Lake Michigan, Lake Erie, Lake Huron) and Canada. The capital of Michigan is Lansing, a relatively small town with a population of only 115,000. The largest city is Detroit (670,000 inhabitants), known all over the world for its extensive auto industry. The Detroit area is one of the most densely populated industrial areas in the US. Michigan’s territory consists of two major peninsulas, the “Lower Peninsula” to the south and the “Upper Peninsula” to the north. Michigan joined the United States in the year 1837. Nearly 10 million people live in Michigan. The state is tenth on the list of states with the largest population. 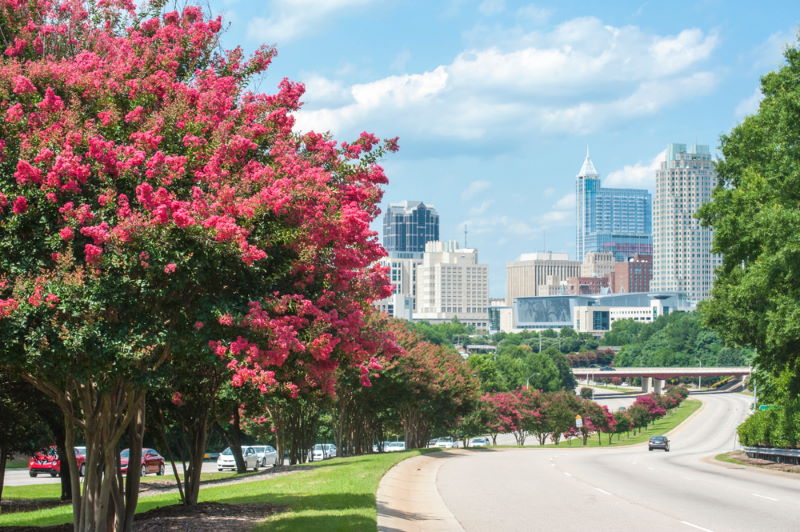 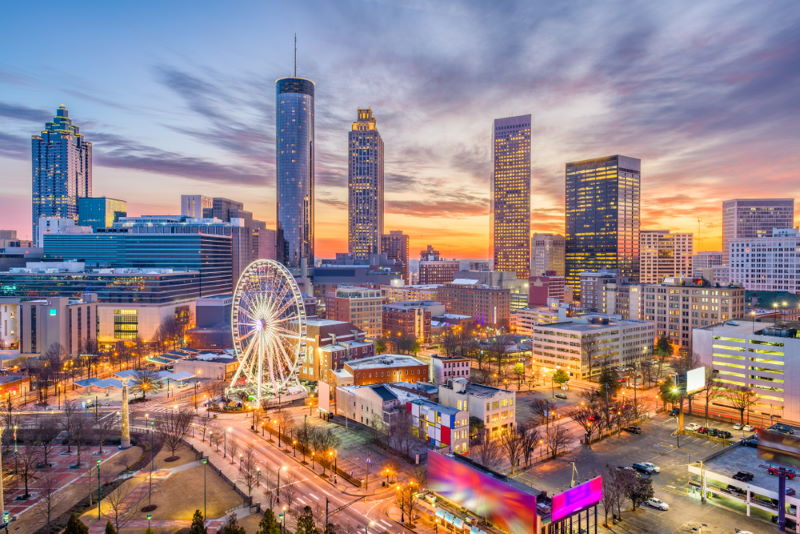 In eighth place we find the state of Georgia, in the southeast of the US, north of Florida, east of Alabama, and south of Tennessee and South Carolina. Georgia borders the Atlantic Ocean to the east. Georgia was also one of the thirteen original British colonies that declared independence in 1776 and laid the foundations of the United States. The capital and largest city of Georgia is Atlanta, a metropolis with about 507,000 inhabitants. In total, more than 10.6 million people live in Georgia, which is eighth on this list. 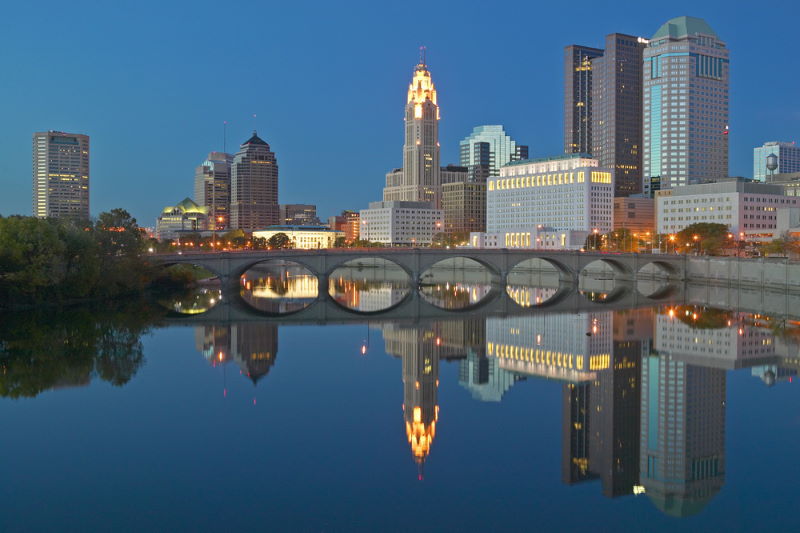 The northeastern state of Ohio takes its name from the Ohio River, a river that forms the border with Kentucky to the south and West Virginia to the east. Ohio also borders Pennsylvania to the east, Indiana to the west and Michigan and Lake Erie to the north. Ohio joined the United States in 1803, making it the 17th state. The capital and largest city is Columbus, centrally located in Ohio. Other major cities are Cincinatti to the south and Cleveland to the north. Ohio has 11.7 million inhabitants and is seventh on the list. 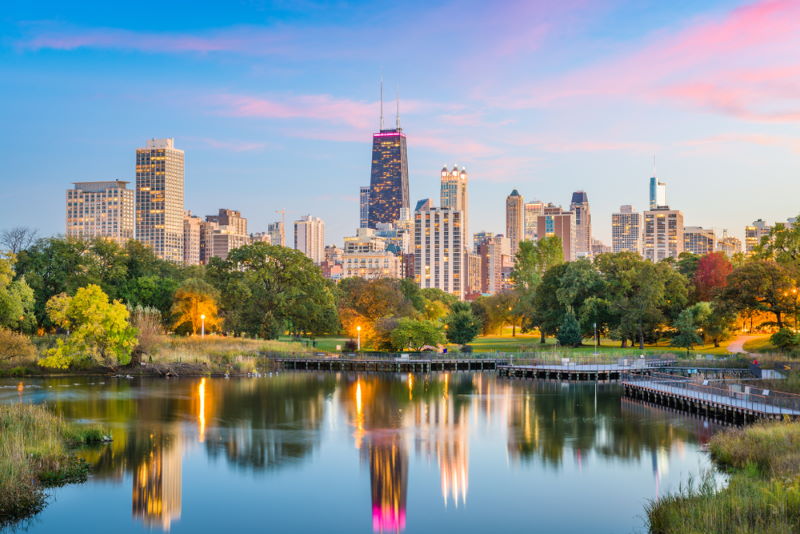 Illinois is located in the northeast of the US, west of Indiana and Kentucky and south of Wisconsin. In the west of the state, the Mississippi River forms the border with Iowa and Missouri. Illinois became a state of the USA in the year 1818. The capital is centrally located Springfield, but the largest and best-known city in Illinois is undoubtedly Chicago. Illinois has a population of nearly 12.7 million, which is sixth in our ranking. 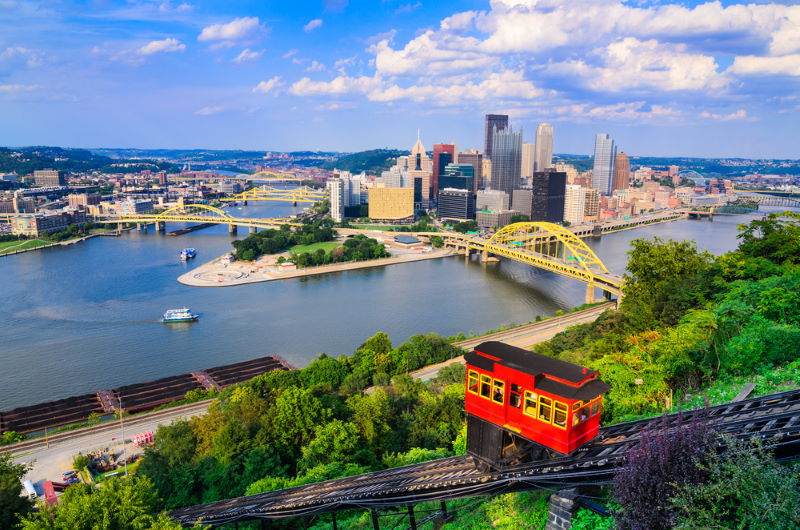 The British King Charles II donated the territory of Pennsylvania in 1681 to William Penn, the son of a British admiral to whom the king still owed a large sum of money. Pennsylvania is bordered to the state of New York to the north, Ohio to the west, Maryland, West Virginia and Delaware to the south, and New Jersey to the east. Pennsylvania was one of thirteen British colonies that declared independence in 1776. The capital of Pennsylvania is Harrisburg, a city of less than 50,000 inhabitants. Much more famous and much larger is Philadelphia with nearly 1.6 million inhabitants. Philadelphia is home to the Independence Hall, the building in which the United States’ Declaration of Independence was approved in 1776. Pennsylvania has a population of 12.8 million and is fifth on this list. 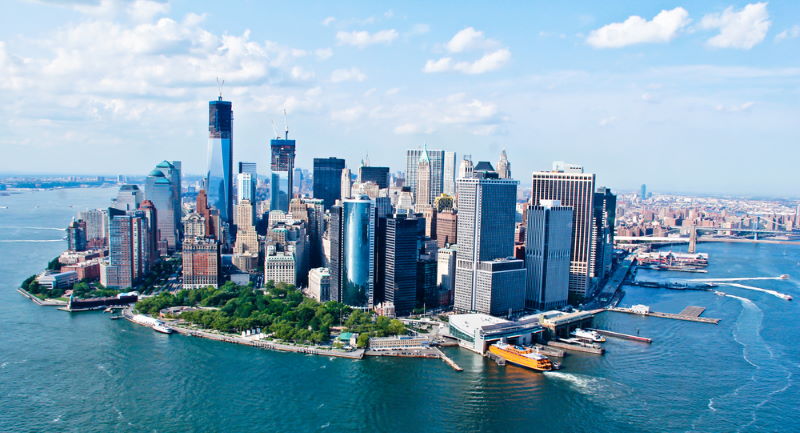 New York State borders Canada to the north and west. The world famous Niagara Falls are located near the city of Buffalo, on the border between New York and Canada. East of New York are the states of Vermont, Massachusetts and Connecticut. To the south are Pennsylvania and New Jersey. New York became a state of the US in 1788. Strangely enough, the capital is not the city of New York, but the much smaller city of Albany with less than 100,000 inhabitants. It goes without saying that New York City is the largest metropolis in the state, with a population of around 8.3 million. In total, New York State has a population of 19.4 million, making New York fourth in our ranking.

The sunny state of Florida is located in the southeast of the US. Florida is located to the east on the Atlantic Ocean and to the south and west on the Gulf of Mexico. To the north, the state borders Alabama and Georgia. Florida was first a Spanish and then a British colony. In 1845 Florida joined the United States as the 27th state. The capital is Tallahassee. Jacksonville is the largest city with a population of 911000. The most famous city is undoubtedly Miami, located on the coast of the Atlantic Ocean. The world famous Disney World amusement park is located in the Orlando area. Florida has almost 21.5 million inhabitants.

The oil state of Texas borders both the country of Mexico and the Gulf of Mexico to the south. Texas is surrounded from west to east by the states of New Mexico, Oklahoma, Arkansas and Louisiana. Texas joined the United States in 1845. Texas conjures up images of ranches, cowboys, rodeos and oil fields in most. The capital is centrally located Austin with over 913,000 inhabitants. The city of Dallas, where President Kennedy was assassinated, has a population of about 1.35 million. However, the largest Texas city is Houston, with a population of over 2.3 million. The state comes second in the ranking: almost 29 million people live there. 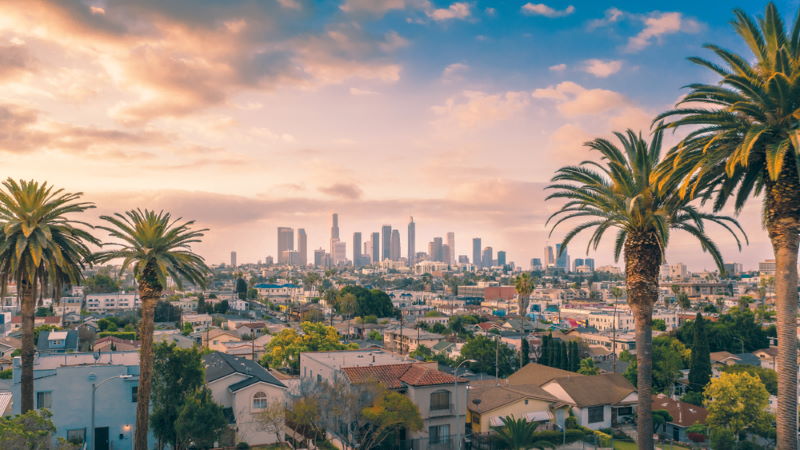 California is right at the top of this list of largest states in the USA. No less than 39.5 million inhabitants live in this sunny state in the southwest of the US. California is bordered to the north by the state of Oregon, to the east by states of Nevada and Arizona and to the south by Mexico. California is the state where Hollywood is located, the center of the American film industry. It is also the state where you will find Silicon Valley, synonymous with cutting edge technology, electronics and computers. The capital of California is Sacramento (514,000 inhabitants). Much larger and more famous, however, are San Francisco (883,000 inhabitants) and Los Angeles (3.99 million). 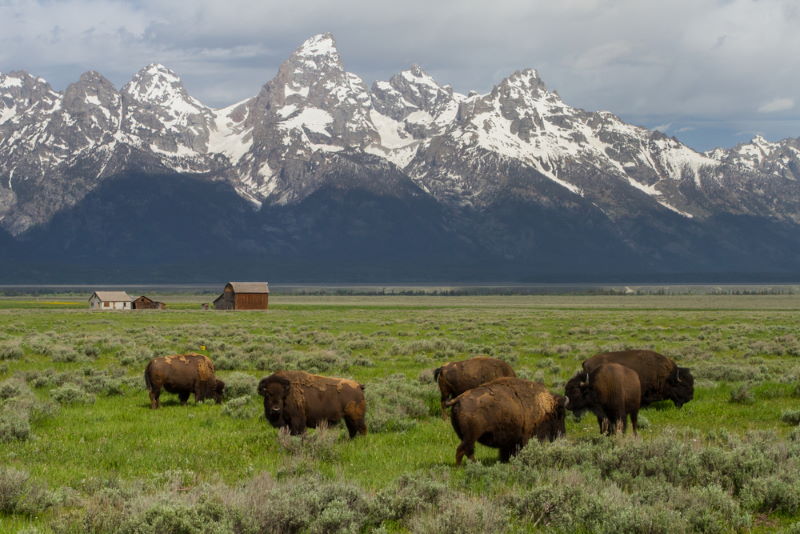 Wyoming stands out on the map of the US because of its rectangular shape. Wyoming’s boundaries are exactly between 41 degrees and 45 degrees north latitude, and between 104 degrees 3 minutes and 111 degrees 3 minutes west longitude. The state is surrounded by Idaho, Montana, South Dakota, Nebraska, Colorado, and Utah. Its area is 253335 square kilometers, the tenth largest state by area in the US. The famous Rocky Mountains mountain range is located in western Wyoming. The famous Yellowstone National Park is located in the northwest of the state. The capital and largest city in the state is Cheyenne. Wyoming became a US state in 1890. 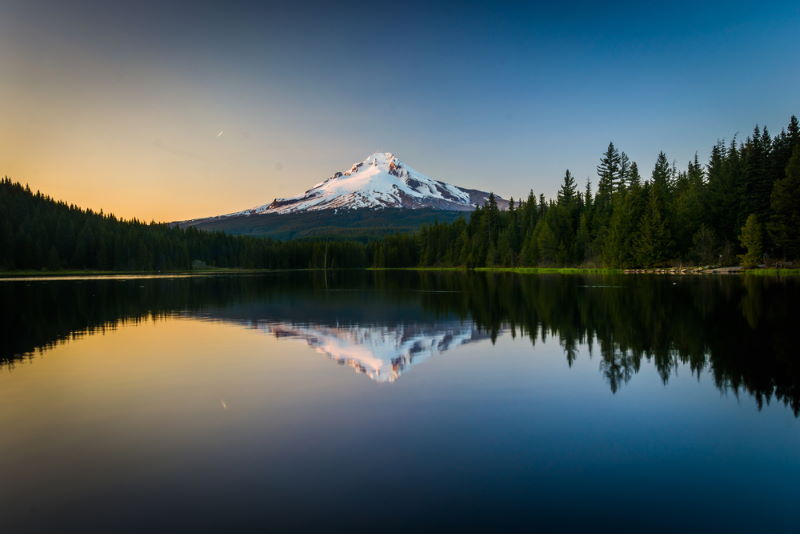 Oregon is located on the west coast of the US and borders the Pacific Ocean. North of it is Washington state, east Idaho, and south Nevada and California. The Oregon landscape ranges from mountainous regions and rainforests in the west to arid desert regions in the southeast. The capital of Oregon is Salem, while Portland is the largest city. In 1859, Oregon joined the US as the 33rd state. Its area is 254799 square kilometers, which makes it ninth on this list. 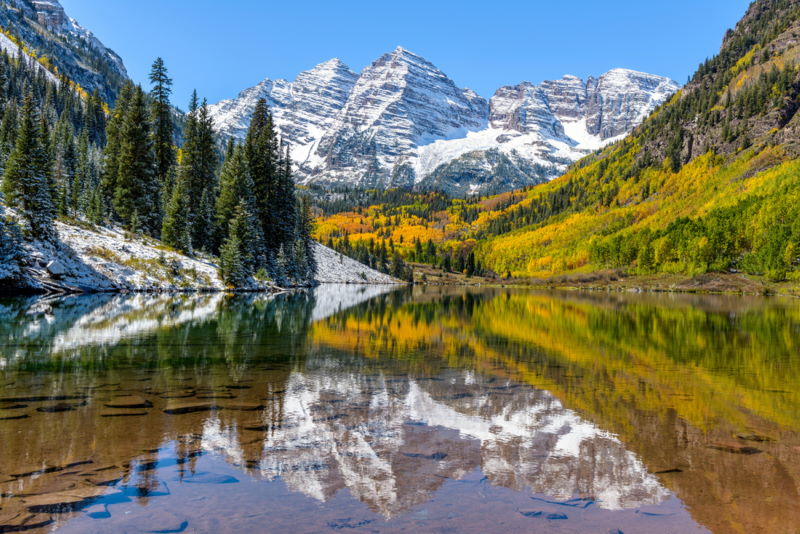 When it comes to the state of Colorado, many immediately think of the Rocky Mountains, the mountain range that covers a large part of Colorado. The borders of Colorado, like those of Wyoming, are straight: they follow well-defined latitudes and longitudes. Colorado is located roughly in the center of the US and is surrounded by the states of Utah, Wyoming, Nebraska, Kansas, Oklahoma, New Mexico and Arizona. The capital and largest city is Denver. Colorado covers an area of ​​269,601 square miles, which is the eighth largest state in the US. 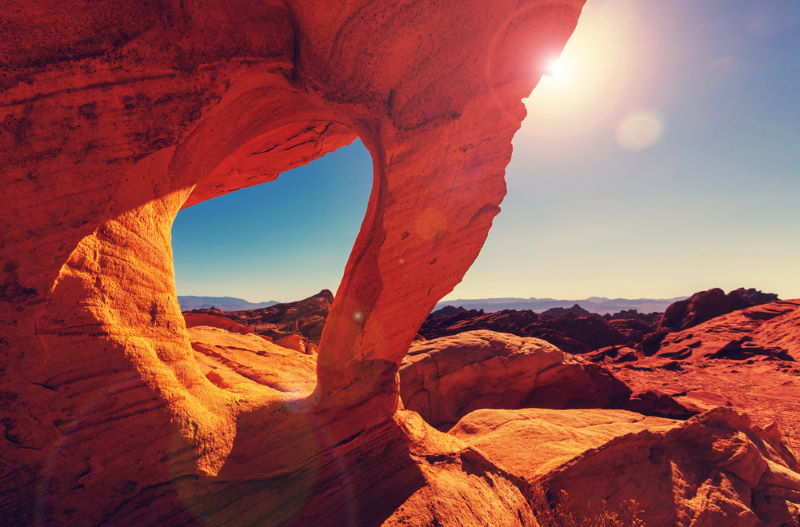 Nevada is located in the west of the US and consists mainly of mountain and desert areas. The surrounding neighboring states are California, Oregon, Idaho, Utah and Arizona. The most famous city in Nevada is undoubtedly Las Vegas, the largest gambling city in the world. Nevada’s capital, however, is the small town of Carson City. The Hoover Dam in the Colorado River is right on the border between Nevada and Arizona. Nevada covers an area of ​​286380 square miles, ranked seventh on this list. 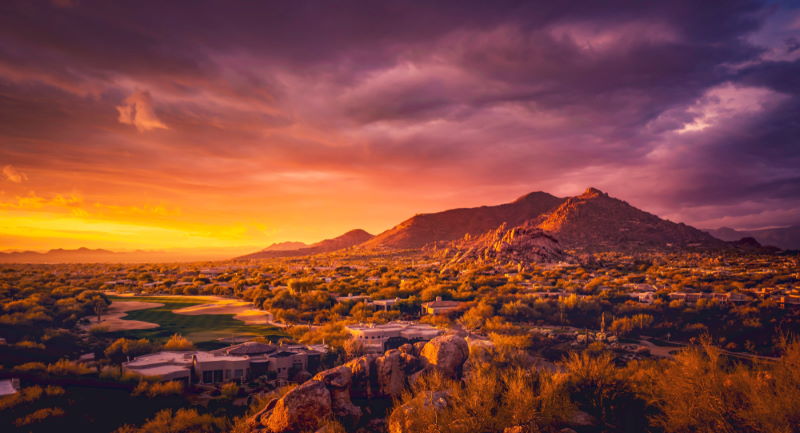 Arizona ranks sixth in our ranking with an area of ​​295,234 square kilometers. Arizona is located in the southwest of the US, borders Mexico to the south and has California, Nevada, Utah, Colorado and New Mexico as neighboring states. One of the greatest natural attractions in Arizona is the Grand Canyon, a deep and very steep river gorge carved by the Colorado River. The capital Phoenix is ​​centrally located in Arizona and is also the largest city. Arizona became the 48th US state in 1912. 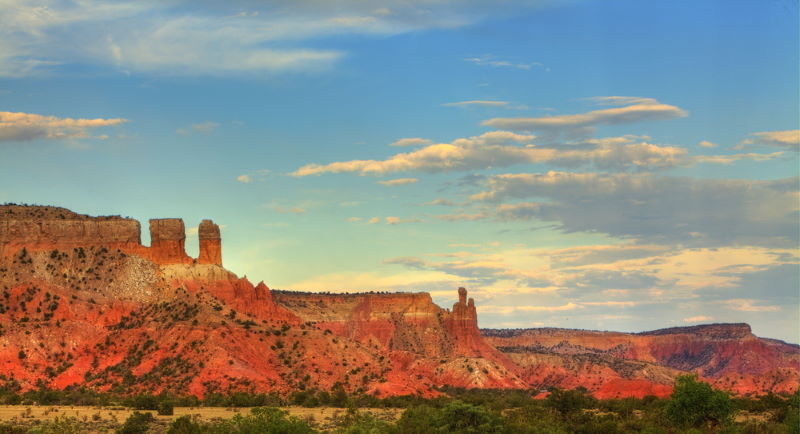 New Mexico is located to the east of Arizona. New Mexico borders Utah and Colorado to the north, Oklahoma and Texas to the east, and Mexico to the south. The state has been inhabited by many thousands of Native American tribes, including the Navajo and Apache. In the 16th century it became a Spanish colony, later part of Mexico. In 1912 New Mexico became the 47th US state. New Mexico occupies an area of ​​314917 square kilometers. The capital is Santa Fe, but the largest city is Albuquerque. 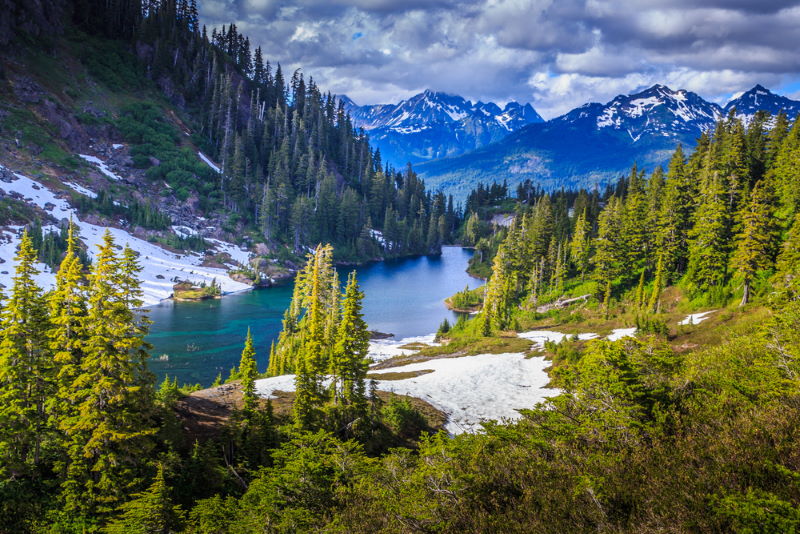 The northwestern state of Montana consists largely of mountain areas, as the name implies. Montana borders Canada to the north, North and South Dakota to the east, Wyoming to the south, Idaho to the west. The Rocky Mountains define the beautiful mountain landscape in western Montana. The state covers an area of ​​380,831 square kilometers and is the fourth largest in the US. The capital is Helena, once founded as a gold mining camp. Billings is the largest city in Montana. 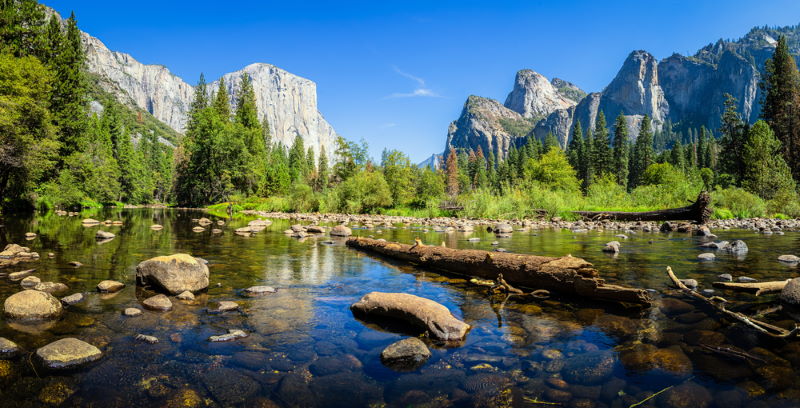 California covers 423,967 square miles and comes third on this list. 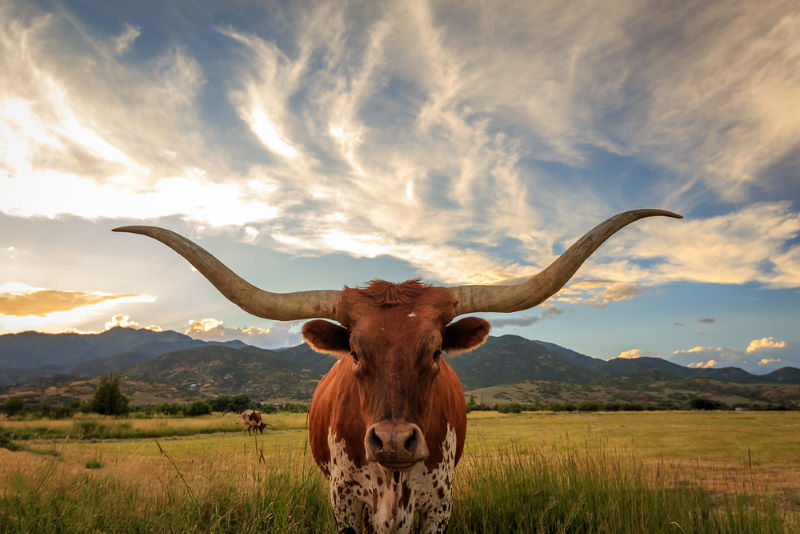 The second place is occupied by Texas, which occupies no less than 695,662 square kilometers. 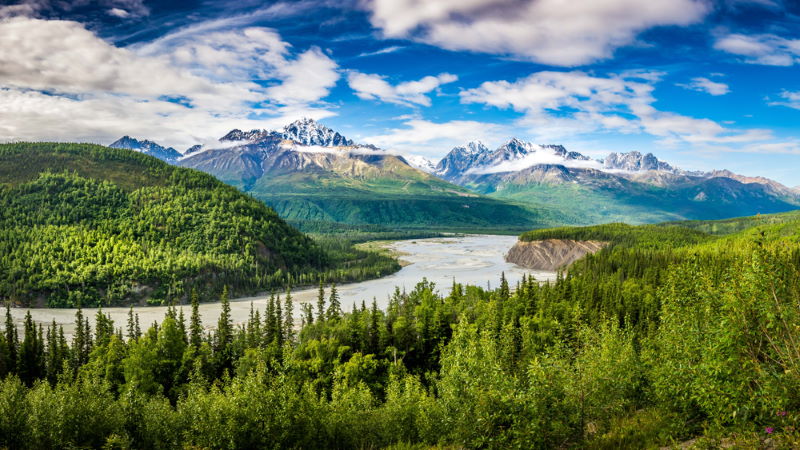 The state with the largest area is Alaska, west of Canada. Alaska has an area of ​​no less than 1723337 square kilometers. The state had been home to indigenous peoples for many thousands of years, until the area became a Russian colony. Russia sold Alaska to the US in 1867 for the paltry $ 7.2 million. Alaska officially became the 49th US state in 1959. The capital is Juneau, but the largest city is Anchorage (population 288,000). The inhospitable and cold Alaska is a country with fantastic landscapes and beautiful natural areas. Oil production is an important source of income.