Death is seldom permanent in the world of comic books, and the medium is renowned for bringing characters back from the dead in outlandish or surprising ways. However, this possibility doesn’t diminish the impact of a character’s death, and the events often have huge consequences on the comic book universe. 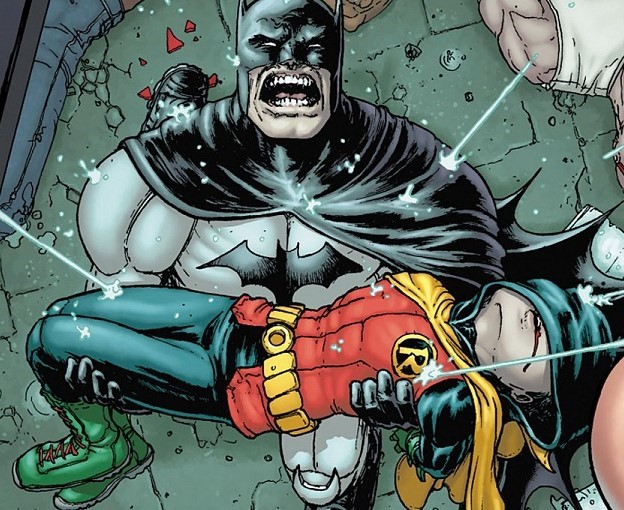 When it was revealed that Batman was killed in the aftermath of DCs huge crossover event Final Crisis, many comic book fans simply shrugged it off. Batman is too big of a character to permanently disappear, so fans were assured he would be back soon enough (the final pages of Final Crisis all but promised this anyway). However, the same can’t be said for the death of Batman’s son Damian Wayne. Damian had become a surprising fan favourite since his introduction by Grant Morrison in 2006, and the cocky, violent protégé was an interesting foil to his principled, disciplined father. Fighting the Heretic (an adult clone of himself), Damian is impaled on the villain’s sword. It was a sudden, brutal death for a child character, and it had a huge effect on the Bat family. 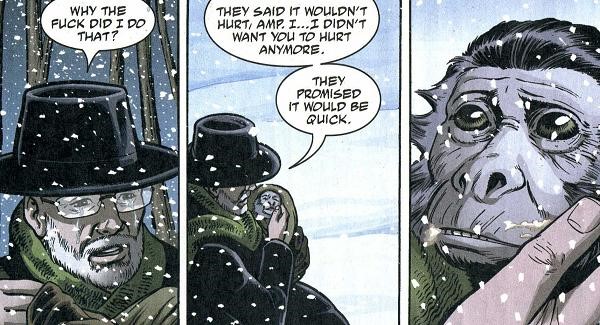 Brian K. Vaughan’s sprawling, sci-fi epic Y: The Last Man was a dark, mature comic book with high concept ideas. The series follows unlikely hero Yorick, the only survivor of an event which kills every man on earth. Accompanied by his pet monkey Ampersand, Yorick struggles to survive in a world overrun with conspiracies, turmoil and little hope for the future. The final issue of the series jumps forward in time and reveals that humanity has a fighting chance thanks to Yorick’s clones. While his younger selves are attempting to rebuild the world, the original Yorkick is depressed and completely broken by the events of the series. In one of the comic book’s most touching scenes, Yorick is forced to euthanize his aging beloved companion Ampersand to put him out of his misery. Animal deaths are always hard to handle, but the sight of Yorick offering Ampersand a poisoned grape is truly heart-breaking. 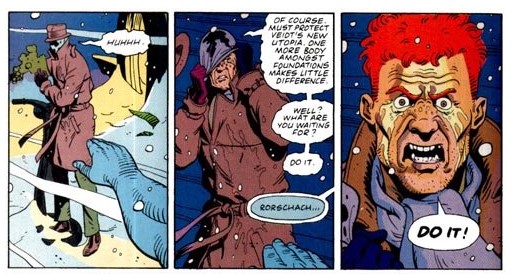 Alan Moore’s classic Watchmen is widely regarded as one the most definitive takes on the superhero genre. One of the main characters of the series is Rorschach, a violent vigilante who is hell-bent on uncovering the truth behind the death of fellow ‘superhero’ The Comedian. When the events of the series reveal a complex conspiracy which threatens to have huge repercussions for the future of mankind, Rorschach is still determined to tell the world the truth. Rorschach has a murky code of conduct and a flawed ‘honour system’, and he is willing to die for what he believes in. Despite seeing what is at stake, Rorschach completely refuses to compromise and he commands the godlike Dr Manhattan to kill him. 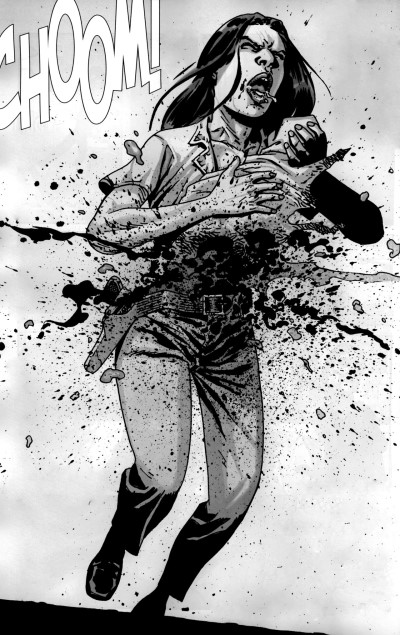 Post-apocalyptic horror series The Walking Dead has always had a fairly direct policy when it comes to killing off its characters, and readers knew from the very beginning not to get too attached to people. However, many fans thought that Lori Grimes, the wife of series protagonist Rick, would last a little longer than she did. When they are attacked by the villain The Governor, the party of survivors flee in every direction. Lori struggles to keep up with Rick because she is carrying her infant baby Judith, and she is shot in the back by one of The Governor’s henchmen. Falling forward, Lori lands on Judith and crushes her to death. The sudden death of these characters is shocking and it is by far one of the most provocative moments of the series. 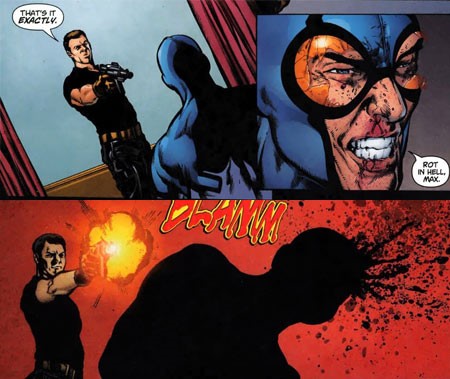 Superheroes typically die in important, universe-affecting acts of self-sacrifice. Whether they are saving a planet from impending doom or taking down the bad guy in one last big fight, most superhero deaths are accompanied by big drama and fanfare. Sadly, this could not be said about the death of Blue Beetle. During DC’s crossover event Countdown to Infinite Earths, Blue Beetle is captured by villain Maxwell Lord after he uncovers the truth about the shady Checkmate organisation. Lord gives Beetle the opportunity to join the organisation, but he refuses and is executed on the spot. The sight of Blue Beetle’s head exploding from a bullet feels like an unjust end for a superhero. 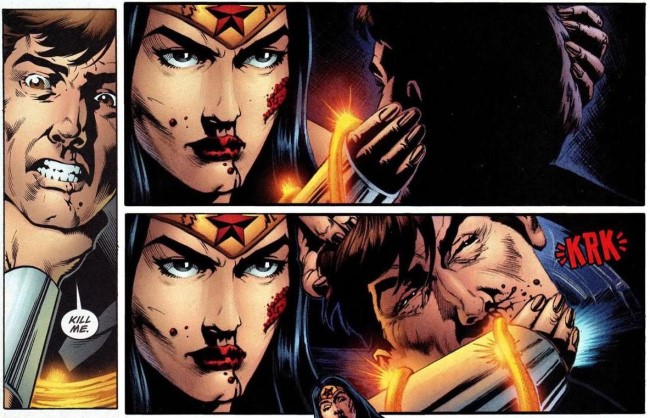 Although Blue Beetle was a beloved superhero who is still missed by loyal comic book fans to this day, his death wasn’t the biggest surprise of the Infinite Earths series. Super villain Maxwell Lord uses his telepathic powers to brainwash Superman into thinking that his allies Wonder Woman and Batman are old foes Doomsday and Braniac, and The Man of Steel goes on a destructive rampage. Wonder Woman tracks down Lord and uses her truth lasso to find out how to bring Superman back to normal, but Lord tells her that the only way to do so is to kill him. With little hesitation, Wonder Woman snaps Lord’s neck. Even for a super villain it’s a grisly, brutal death, but the aftermath had long-lasting consequences for Wonder Woman. Footage of her killing Lord was broadcast around the world, and her reputation and relationship with other superheroes was in tatters. 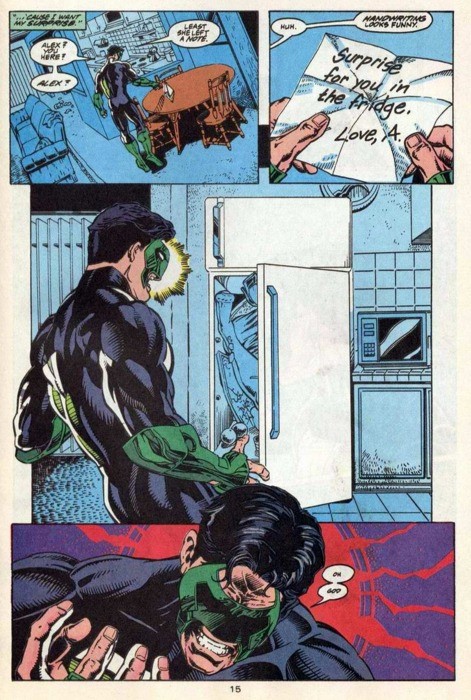 Poor Kyle Rayner. After receiving the heavy burden of becoming earth’s latest Green Lantern, he struggles in juggling his normal relationship with girlfriend Alexandra Dewitt and the responsibility of his new powers. Just as he thinks he has everything in control, he comes home to find Alexandra brutally murdered and stuffed into a refrigerator by the hands of villain Major Force. The most interesting part about DeWitt’s death is not the grisly murder itself but the controversy it sparked. DeWitt’s murder is often cited as a benchmark example of how writers use the death or depowering of female comic book characters as a lazy plot device. It’s become so popular that the phrase ‘woman in a refrigerator’ is regularly used to condemn anti-feminist comic books or writers who have little regard for female characters. 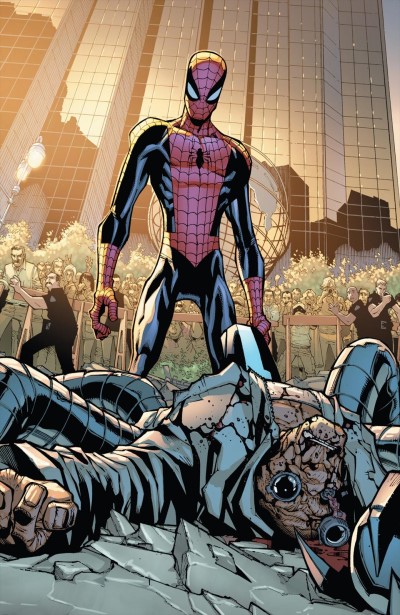 When it was revealed that one of Spiderman’s most enduring villains was slowly dying, fans were confident that Otto ‘Doctor Octopus’ Octavius would find some sort of last minute cure and return back to his menacing ways. Octavius tried to find a cure in the form of the Goblin Serum and even attempted to coerce Tony Stark into healing him, but there was no fix for his fatal condition. However, in one of the most audacious twists in comic book history, during his final moments Octavius transferred his consciousness into the body of Peter Parker. Renaming himself ‘Superior Spider-Man’, Octavius is currently living Peter Parker’s double life and is even taking steps to improve Parker’s heroic efforts and his personal life. Although it seems inevitable that Parker will return (a part of him still lives inside of Octavius’ head), the death of Doctor Octopus has brought one of the most intriguing Marvel storylines in recent years. 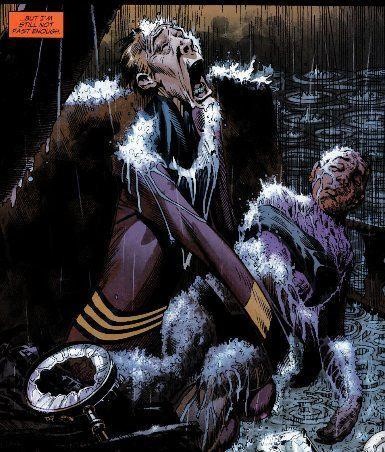 The murder of Elongated Man’s wife Sue Dibney was the subject of crossover event Identity Crisis, and most of DC’s big heroes rallied together to uncover the truth behind her death. In a shocking revelation, the second issue of the limited series shows a flashback scene which depicts Sue being raped in the JLA Headquarters by super villain Doctor Light. It was an ugly, risky storyline, made all the more gut-wrenching by the fact that Dibney wasn’t even a superhero and was just a ‘normal’ person. Her character was a curious choice for such a provocative twist, and the storyline is one of the most controversial in comic book history. 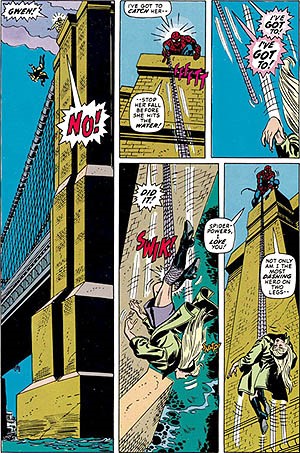 Peter Parker has always suffered from a complicated, difficult past, but it was the death of his girlfriend Gwen Stacy which really transformed his character. Gwen is abducted by the Green Goblin and thrown from the George Washington Bridge, but Peter is able to web her leg and pull her up before she hits the water. Thinking he has saved her, Peter hoists Gwen up before realising that she is dead. The whiplash of her sudden stop in mid-air has broken her neck, and Peter blames himself for her death. It was a huge moment in comic books as deaths weren’t a precedent at the time. It was unthinkable that a main character would be killed in such a way, and many think that Gwen’s death was the moment that comic books moved away from the Silver Age and into the more mature Bronze Age. The Bronze Age is dominated by more mature themes like real-world problems and social issues, and Peter’s devastating grief was a fitting development for this new gritty take on comic books.