The sweet seductive sounds of a casino are the first part of the gambling experience, but this soon pales in comparison to the thrill of risking it all on the throw of a dice or the spin of a wheel. Whether you are a die-hard gambler, following your system and playing the odds or a casual punter, out for a laugh and some fun, not really caring if you win or lose, there are some cities that are the best holiday destinations for you.

The ‘biggest little city in the world’ as Reno styles itself, was a front runner in the America gambling stakes, seizing the opportunity offered by both Nevada’s generous gambling legislation and the divorce laws in the 1930s. Reno was America’s first gambler’s paradise, before being outstripped by La Vegas and Atlantic City. However, Reno is still a great place to play games of chance, and many Californians prefer nearby Reno over the more distant Vegas. Establishments like the Atlantic Casino offers fresh, clean accommodation, table stakes starting as low as three dollars (although five is more the norm) and plenty of slot machines to feed your change into. The Boomtown and Bonanza Casinos also offer a good gambling experience, starting with reasonable prices in a good mixture of casino games like blackjack and poker. There is also a fair amount of sports betting in Reno, split fairly evenly between the horses and sports.

Melbourne is home to the immense Crown Casino and Entertainment Complex, stretching a whopping 510 000 metres squared, which makes it not only one of the largest casino complexes in the world, the actual largest in the southern hemisphere. It is home to a comprehensive poker centre and has hosted many international poker competitions, including the richest contest of all, the Aussie Millions. But there is also room for those who do not have hundreds of thousands of dollars to gamble with, boasting six major casino games with stakes starting as low as 1 cent. There are three hotels in the complex, with around 1 500 rooms between them, so you can stay close to the action and the fun. Another important gambling event in Melbourne is the first Tuesday of November: Melbourne Cup Day. The entire city stops for the duration of the race and fortunes are won and lost on the running of the horses at Flemington Racecourse – a splendid day out for a gambler looking to have a flutter.

You may be forgiven for believing that you stand a better chance of winning when you gamble in Los Angeles. The state gambling laws mean that the players do not play against the house; they play only against each other. The casino makes its money by providing the venue for the games, and, presumably, a ‘fee’ or percentage from the players. The Crystal Casino and hotel is the biggest of the Los Angeles gambling establishments, lying close to both the airport (ideal for a quick game or two before a connecting flight) and the beautiful beaches where you can see those beautifully bronzed Californian girls and boys swimming, surfing and just hanging out.

Even non-gamblers will stop, awestruck, at the first sight of the magnificent Marina Bay Sands. Inspired by croupiers clever shuffling, the immense building looks almost like an otherworldly cruiser balanced atop three decks of cards. The top features a hair-raising infinity pool that looks out over the sprawling city below – not a sight for those nervous of heights! Unsurprisingly, the casino is the most expensive casino in the world, having cost a staggering eight billion dollars to build. That cost includes over a billion to purchase the land on which it stands! One of the investors behind the huge edifice is the famous Las Vegas Sands, which explains how the Marina Bay sands managed to get it all right! The complex boasts some 2 500 rooms, housed in the three towers that support the ‘boat’ making sure that there is always room for a keen gambler at the Marina Bay Sands! Singapore, however, does not only have one egg, albeit a large and ornate one, in her gambling basket, also being home to the equally munificent Resorts World Sentosa. Costing about half the build price of Marina Bay Sands, Resorts World Sentosa has managed to include a large oceanarium and a Universal World Theme Park for its four billion dollar build price. (As locals must pay up to a hundred dollars to enter the casinos, the authorities have recently announced plans to exercise greater controls on remote, or online gambling. While this will most likely not affect your gambling experience on the ground, do be aware of any further changes in the law before you travel)

The British love to gamble and the UK has some of the best gambling laws from the point of view of the dedicated gambler. These laws have been tightened in recent years to extend greater protection to children and vulnerable adults, but it is still possible to find someone to take your bet on almost anything. London’s prestigious gambling clubs tend to be the remnants of her famous ‘gentlemen’s clubs’ where men (and only men) could escape the rigours of domesticity and snooze the afternoon away in comfortable chairs, chatting and perusing the newspapers with a drink by their side. Crockfords, now closed, was one such establishment. Les Ambassadeurs managed the transition with greater panache and now offers a splendid dining facility to those who can afford it! The club is strictly for members only, so do not expect to simply walk in off the street! High stakes gambling is overseen by the UK Gambling Commission, and the club offers a fantastic range of games of chance. Once you gain access to the club (by taking up membership) you will be able to sit in sumptuous splendour as you gamble, drink, observe the world go by or relax in the comfort of the library. Many of the top hotels will be able to guide you as to the best establishments for your game of choice, at stakes you can comfortably afford: listen out for names like the Clermont and Colony Clubs and the Ritz (itself a London landmark).

Despite the obvious benefits of visiting the Bahamas (warm sunshine, golden sandy beaches, friendly and welcoming locals and stunningly beautiful scenery) I would council keen gamblers and gamers to perhaps delay their holiday until late 2014. This is when the Baha Mar, a brand new, 2000-room casino and resort complex is expected to open. At present Nassau’s gambling needs are more than adequately serviced by the Crystal Palace Casino, conveniently nestled on Cable Beach, close to all the best resort hotels and a mere twenty minute drive from the airport.

There has been a casino in Monte Carlo for many years now, since 1854. The casino was essentially set up by the royal family of the time as a source of income. After a somewhat shaky first few years, as the infrastructure of the area was build up and improved to cater to the anticipated extra traffic, the casino began to turn a profit. The Monty Carlo Casino has learned and adapted over the years, keeping up the with demands and needs of its patrons and it is still flourishing today, helped no doubt by the many references to the casino in modern film and television. (At least two James Bond movies and two cartoons (Cars 2 and Madagascar 3) feature the casino). Despite having a wonderful historical ambiance the Casino Du Monte Carlo is up-to-date and thoroughly modernised.

Atlantic City is the home of the famous boardwalk, America’s first and now the setting for the gangster television show ‘Boardwalk Empire’. Atlantic City’s Boardwalk is still a thriving place, with arcade games, stalls and rides of all types available. While Atlantic City lost some allure during the 1990s, when Las Vegas underwent a massive renovation and neighbouring Connecticut opened up two casinos of her own, it still remains a fantastic place to gamble, featuring over twelve casinos and still being deserving of the name ‘Gambling Capital of the East Coast.’ It is a great place to shop, relax and gamble, as you drink in the fabulous glamour that still remains from the heady days of the twenties and thirties. Hotels abound all over the city, so you can choose to remain central, or to opt for a quieter existence a bit further afield.

Macau is heavily dependent on gambling and tourism for a large section of its income, so the casinos are large, lavish and welcoming. Just across the water from Hong Kong, Macau is, like the island, a Special Administrative region, responsible for its own policing, currency and legal system, but relying on the might of China for military protection and dealing with foreign affairs. Many of the thirty-three magnificent casinos have hotels attached, enabling serious player to move quickly from bed to the tables. As well as a wide selection of casino games, both traditional Chinese games and Western imports, it is possible to bet on sports, greyhounds and horse-racing. While the crime rate has dramatically improved since the handover to Chinese rule, there is still an element of triad involvement in the casinos. These high-level gangsters generally will not bother visitors or tourists, unless they are owed money by them, so make sure you play with your own money, and do not take out any spur-of-the-moment loans!

Your Las Vegas gambling experience starts at the airport, with slot machines sprinkled everywhere. From dollar-a-time machines to high stakes poker, Las Vegas has a game for everyone, showing exactly why it has earned its spot at the top of the list for places to gamble. As well the gambling Vegas is known for scantily-clad, beautiful showgirls; soaring modern hotels, all of which try to out-do each other in lavish ostentation; and the hundreds of gleaming and glittering neon lights that shine brightly over the surrounding desert. Las Vegas began life as a humble way station for miners passing through, but opened its first casino in 1931. Scientists found Las Vegas to be the perfect spot to watch nuclear testing which helped to grow the town’s popularity. Within a surprisingly short time, casinos sprouted up all along the world-famous Strip, and the town grew into a city. Now immensely popular with lovers looking for a quick wedding, as the site for bachelor parties and hen nights as those last wild oats are frenetically sown and with people from all walks of life, looking to have a little fun and perhaps win a life-changing fortune! Las Vegas is a vibrant and fast moving town, with restaurants, casinos and entertainment venues springing up from nothing, sometimes booming and sometimes going bust almost immediately. All the major casinos have plenty of rooms, wanting to keep their guests close to home, and spending their money in the confines of the hotel and casino. For an unforgettable gambling experience, Las Vegas is still THE place to be! 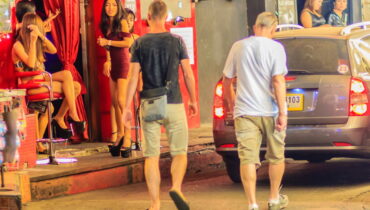