As soon as you have ‘devil’ in your name, you’re already behind in the popularity polls… What the Tasmanian devil got its name from, and many more fun, interesting (and disturbing) facts you can read in this article. Meet the Tasmanian devil, an animal that you will only encounter in the wild in Australia.

The Tasmanian devil is a (predatory) marsupial 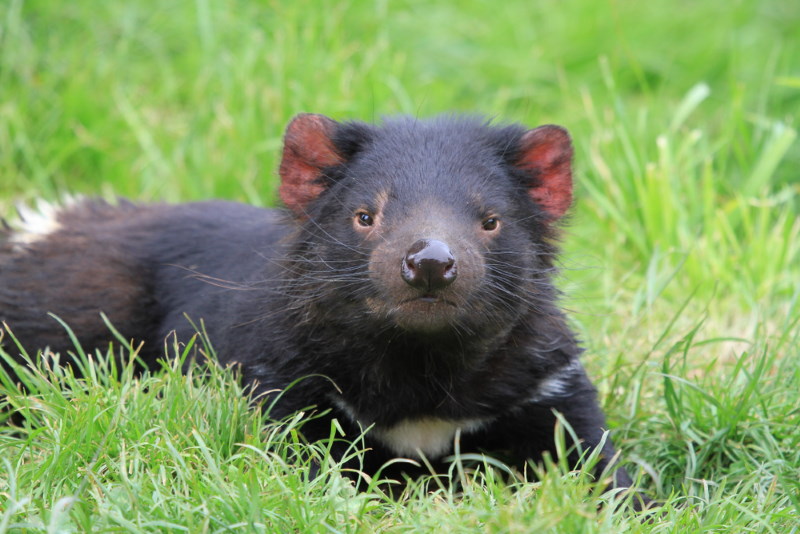 The Tasmanian devil (Sarcophilus harrisii) is not just any marsupial animal, no, it is the world’s largest carnivorous marsupial. Tasmanian devils are about 70 to 110 centimeters long, and to that is added a tail of plus or minus 30 centimeters. It is a member of the family of true predatory marsupials (Dasyuridae), just like the marsupial mice and marsupials.

Survival of the fittest

After a pregnancy of about three weeks, between twenty and forty Tasmanian devils are born. Don’t think that the female will walk around with an enormous belly until the delivery, because the young are about the size of a grain of rice, have no fur and their senses are not very good. This is a problem, because immediately a big challenge awaits the youngsters. The newborn joeys race against the clock to reach one of the four spots in the pouch of mother hen. And should you be among the ‘lucky few’, as a young Tasmanian devil you are not yet guaranteed to grow up to be an adult. Often only one of the young survive the first year. Even with their adult congeners they have to watch their step, because if they are really hungry, they sometimes want to sink their teeth into the joeys. Fortunately, Mother Nature has given the youngsters a head start. They are still very good climbers and can be in a tree in no time. Adult Tasmanian devils prefer to stay with four legs on the ground, so the youngsters are safe in the tree. 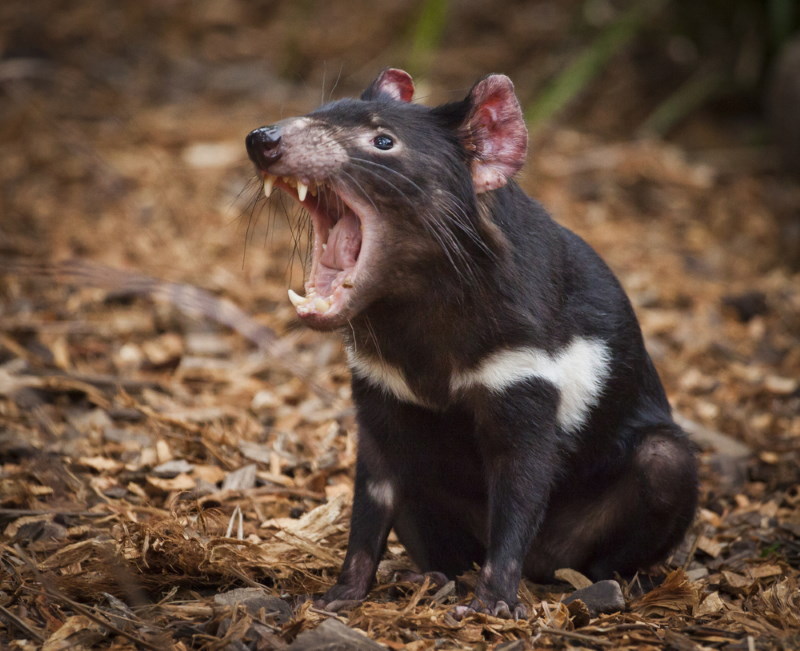 The first European settlers to set foot on Tasmania, an island some 240 kilometers southeast of the Australian mainland, began a new existence in good spirits. At night, however, they heard strange noises coming from the “bush. Bloodcurdling screams, growls; it sounded as if the devil was hiding outside. And that is where the Tasmanian devil gets his name from. In addition to screaming and growling, his range of sounds also includes coughing, screeching, sniffing and sneezing. By the way, the Tasmanian devil makes these sounds to prevent enemies from getting scared, so that he does not have to fight. 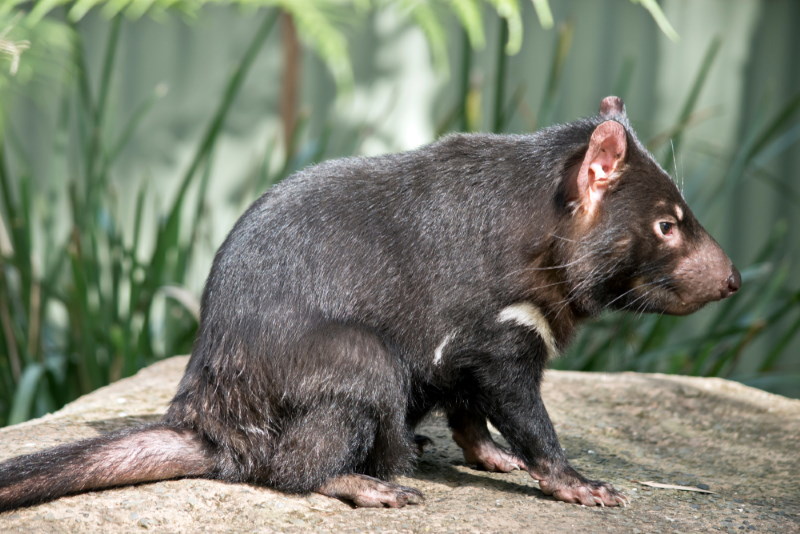 Do you see a Tasmanian devil with a thick tail? If so, it’s a healthy specimen. Tasmanian devils, like other marsupials, store fat in their tails. That can add up to quite a few grams, because Tasmanian devils eat 15 to 40 percent of their own body weight per day. The Tasmanian devil itself weighs between 5 and 14 kilograms (average 8), so you do the math! 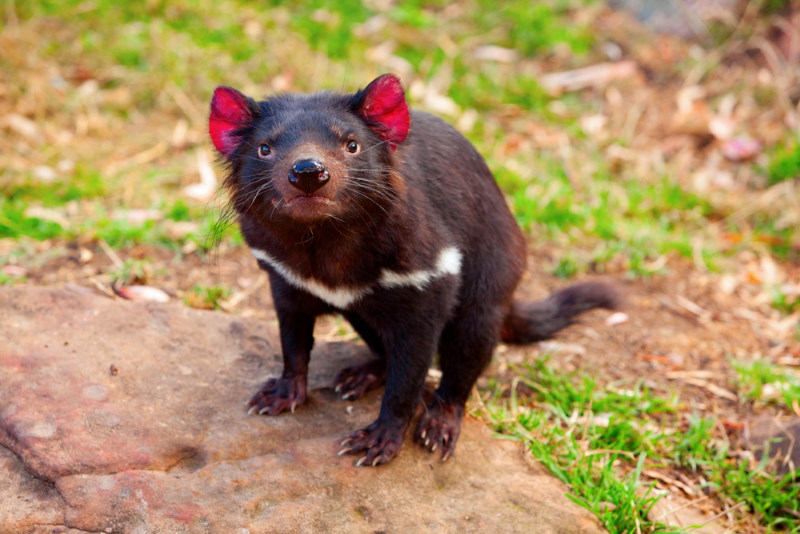 Besides traffic, a form of cancer that is contagious poses the greatest threat to the Tasmanian devil. Reportedly, this disease (devil facial tumor disease) first surfaced in the late 1990s and has claimed many victims since. The infected Tasmanian devils develop tumors in and around their mouths, which prevent them from eating, resulting in a slow death from starvation or exhaustion. Much is not yet known about the disease, but it is known that this form of cancer is highly contagious. Tasmanian devils can already contract the disease by fighting each other or by eating the same prey. To preserve the species, 26 healthy animals were released into a nature park in eastern New South Wales in October 2020. This was the first time in 3,000 years that Tasmanian devils were roaming the wild on the Australian mainland again, after being chased away by the dingo all those years ago. Under the banner #Devilcomeback, the Aussie Ark organization plans to release forty more healthy animals into the wild over the next two years.

Watch out for its powerful jaws! 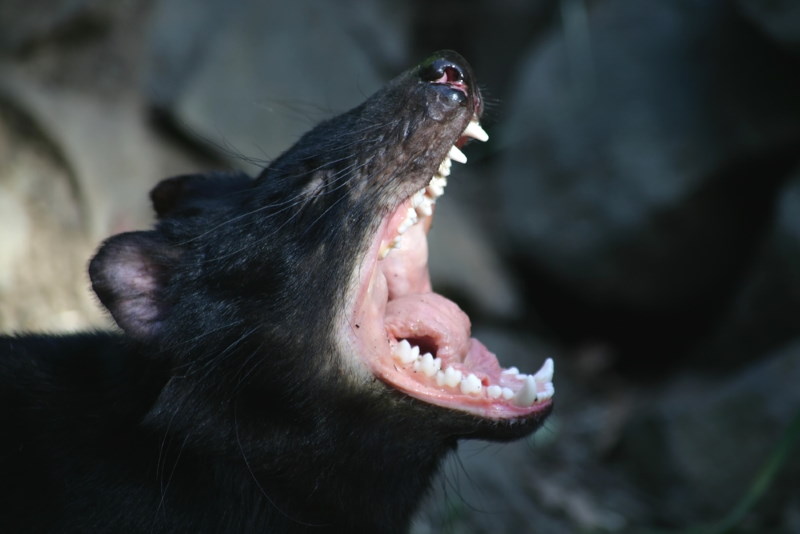 The 42 teeth in the Tasmanian devil’s mouth, as many as a dog, continue to grow throughout his life. Not surprising when you consider that those teeth are used intensively. Tasmanian devils have the strongest bite in the world for mammals their size. Their powerful jaws make bones look like dry twigs; he manages to crush them without much effort. Even a metal cage does not stop the Tasmanian devil, it simply bites through this to get to its prey. 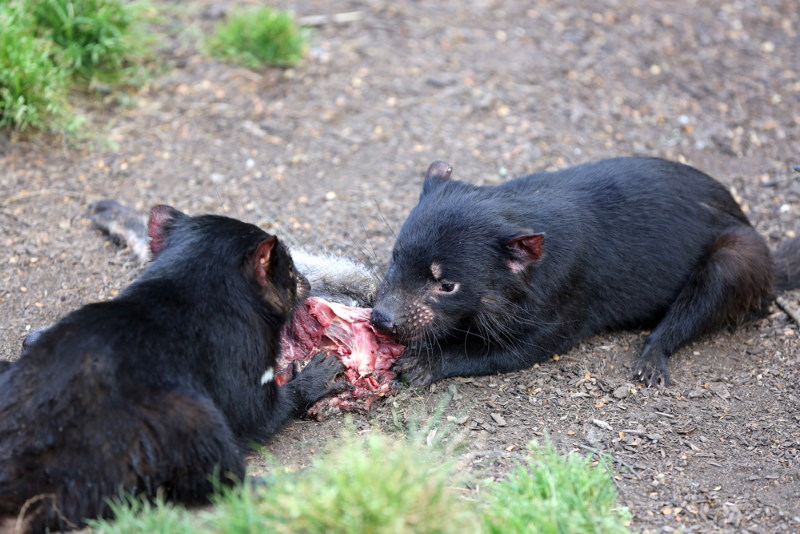 Nothing like nibbling on an occasional nut, devouring a carrot or the disc of five; the Tasmanian devil is a “hardcore” carnivore. On his menu there is nothing but meat. He prefers birds, snakes, insects and wombats, but is a lazy hunter. He therefore has no problem regularly devouring a carcass, such as that of a sheep or kangaroo. And that carcass goes down to the last bones and hairs. Actually, they are a kind of garbage collectors. Unfortunately, quite a few Tasmanian devils fall victim to their eating habits, because when they are busy with a carcass, they often end up as ‘roadkill’ themselves.

Tasmanian devils have a lurid habit

The Tasmanian devil doesn’t just use carcasses as a food source. In between bunkering, these little devils also like to take a nap in the carcass… Of course, you get tired of all that food, so when they wake up, they can pick up right where they left off.

There is a cartoon character based on this animal

The Tasmanian Devil (Taz to insiders) is a cartoon character from the Looney Tunes. Taz bears little resemblance to his wild relatives. For example, he walks on two legs and takes the shape of a tornado when he is looking for food. That voraciousness, however, he has from the real Tasmanian devil.