The cute, woolly wombat is a pouch animal that occurs only in Australia and on Tasmania. It resembles a cross between a bear (albeit a small one) and a badger.

Wombats (Vombatidae) belong to the order of climbing mules, but climbing is not exactly their favorite activity. That may be explained by the fact that the wombat is not very good at it… But it can dig like the best of them! Their burrows, in which they spend most of the day, can be found to a depth of up to 3 meters and the associated corridors can be up to 200 meters long. Want to know more about the wombat? Then read on quickly!

The wombat is a vegetarian 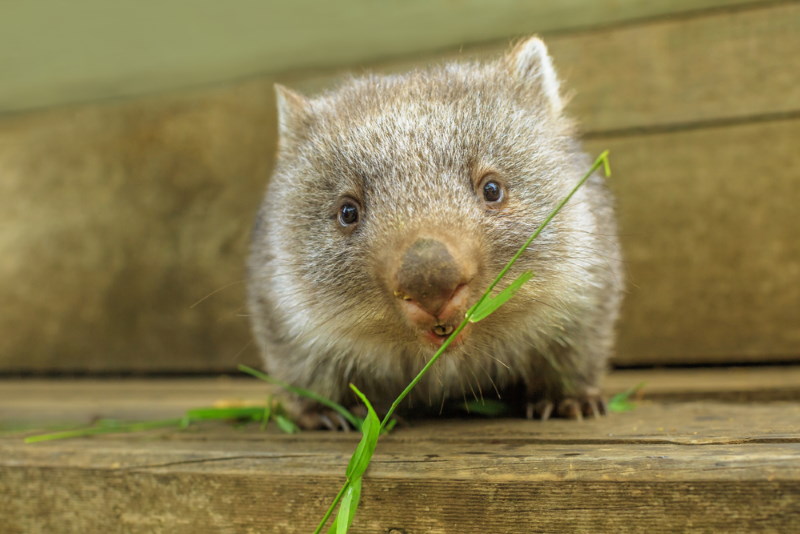 Wombats are herbivores and live on a strictly plant-based diet. At night, wombats come out of their burrows and forage for grasses, tubers and roots. In winter, the wombat sometimes shows up during the day as well, to sunbathe for a while or to get some food. The digestion of a wombat is slow, it takes up to 14 to 18 days for a wombat to digest something, and it has a very low energy requirement. Because of this, the wombat spends less time searching for food and eating itself, than other herbivores of similar size.

The teeth of a wombat continue to grow 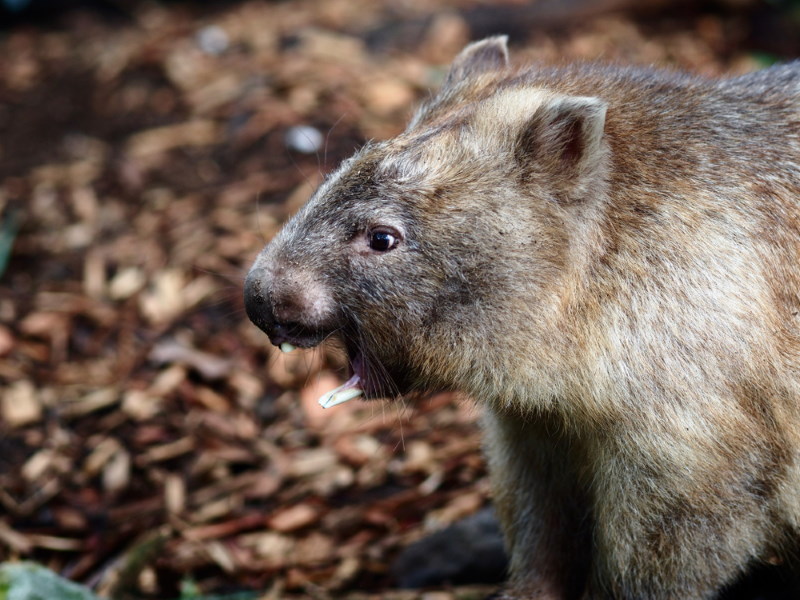 Like a guinea pig, a wombat’s teeth continue to grow throughout its life. So how is it that there are no wombats walking around with huge over- and/or underbites? By chewing on grasses, bark and roots, the wombat keeps the growth of its teeth in check. 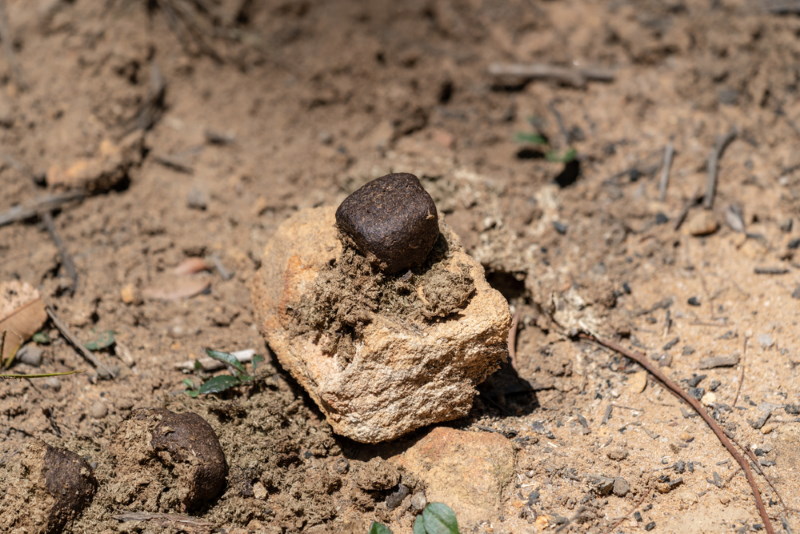 The wombat is the only animal in the world that lays cubic turds. They are also very dry droppings, because during the long digestive process, wombats extract everything from their food that can be extracted, down to the last drop of water. Because of the way the intestines stretch, cuboid-shaped droppings eventually emerge. So wombats don’t have a square anus, as was thought for a while, nor do they beat around the bush after they poop. The droppings of wombats living in zoos are sometimes less cubic, probably because these animals can take in more fluids.

Wombats usually have only one young 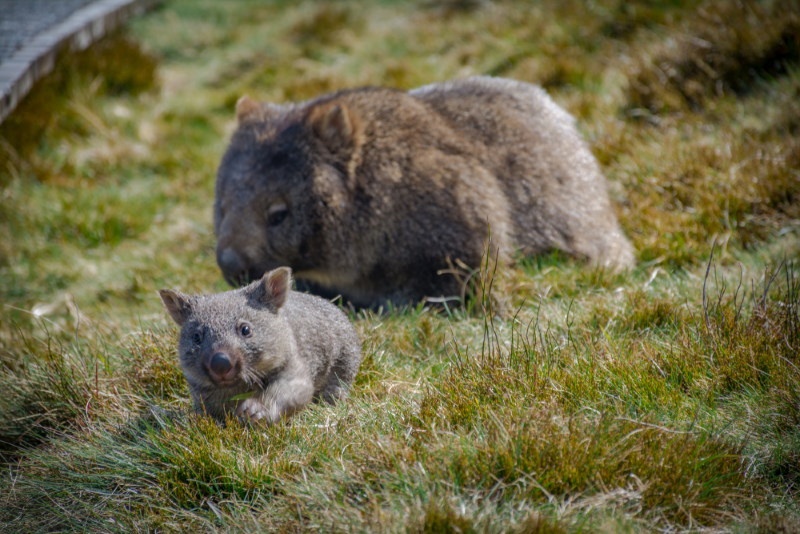 Twins are very rare in the wombat world. Usually the females only have one young at a time. That cub, like many other marsupials, is still very small. A wombat cub weighs about 2 grams and is about 2 centimeters tall. But small as the cub is, it knows how to crawl to mom’s pouch right away to suck on a nipple. The young remains in the pouch for six to ten months, and then stays cozy in the underground nesting chamber for a while. Ma Wombat continues to wean the young until it is about fifteen months old. After that, it’s time to stand on its own two feet.

The opening of the pouch points backwards 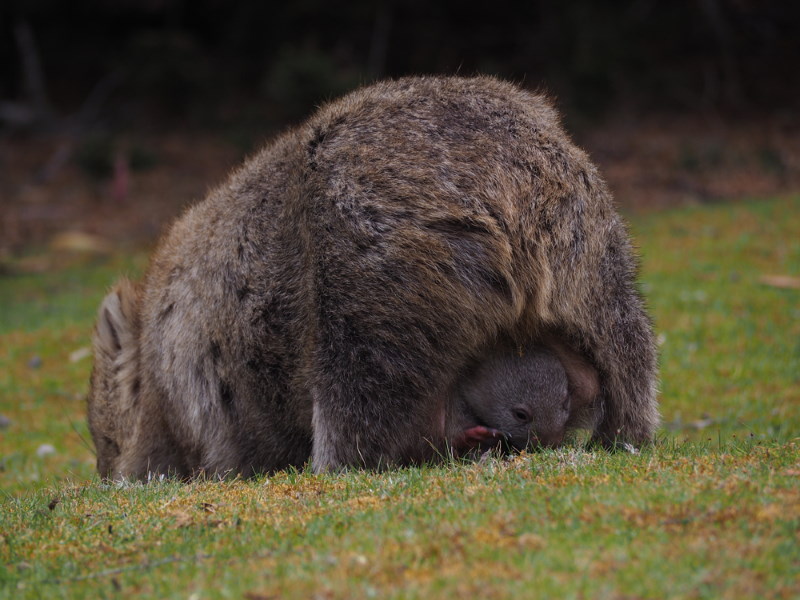 How do you prevent a young wombat from getting covered in dirt while digging? This has been thought about in “the design” of the wombat. The opening of the pouch namely points backwards, so that during the digging and digging of corridors and fortresses not a grain of sand lands on the youngster.

There are three species of wombats still living 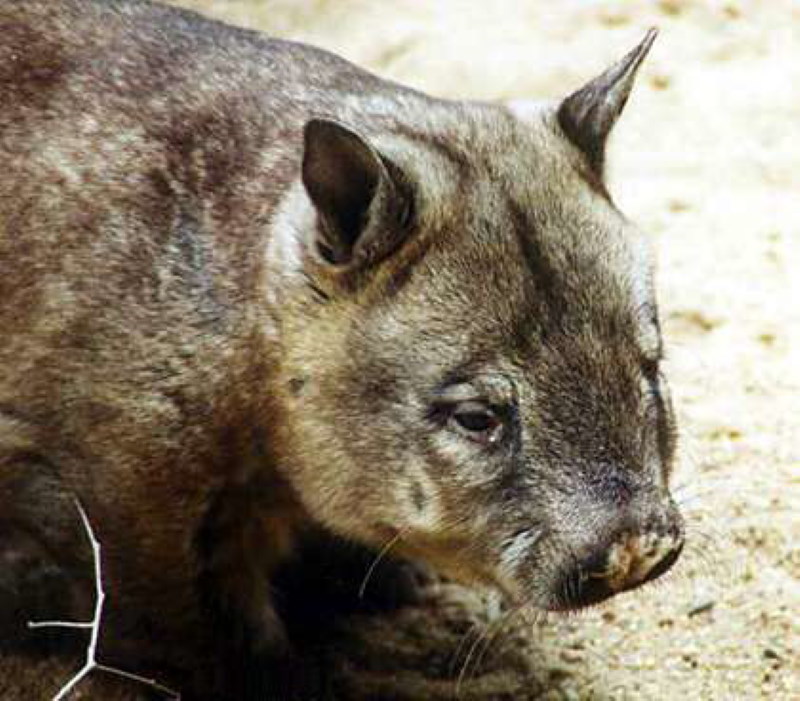 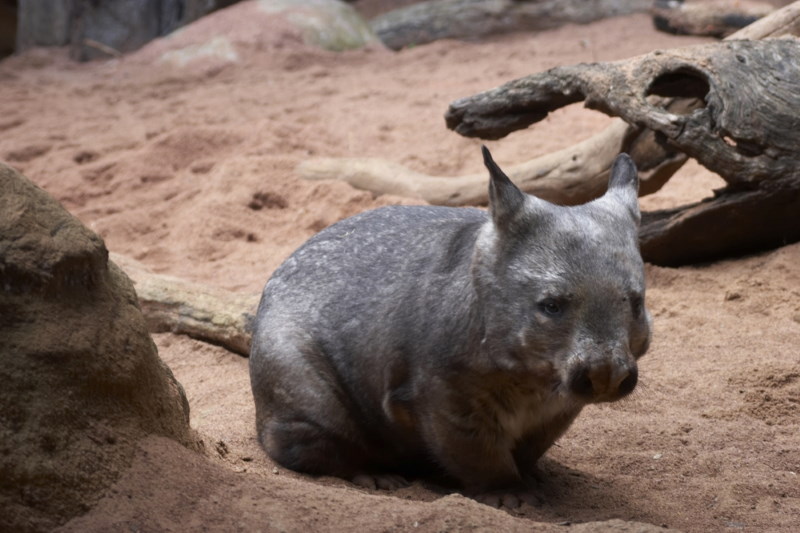 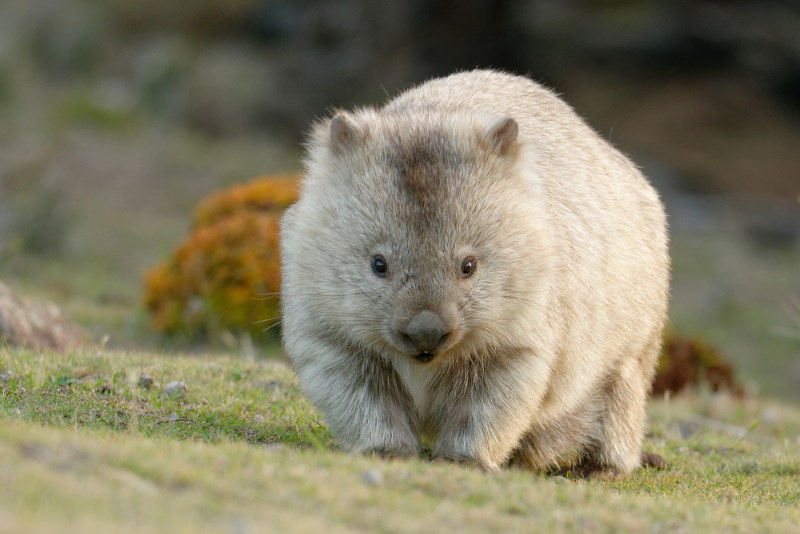 The wombat is quite self-contained 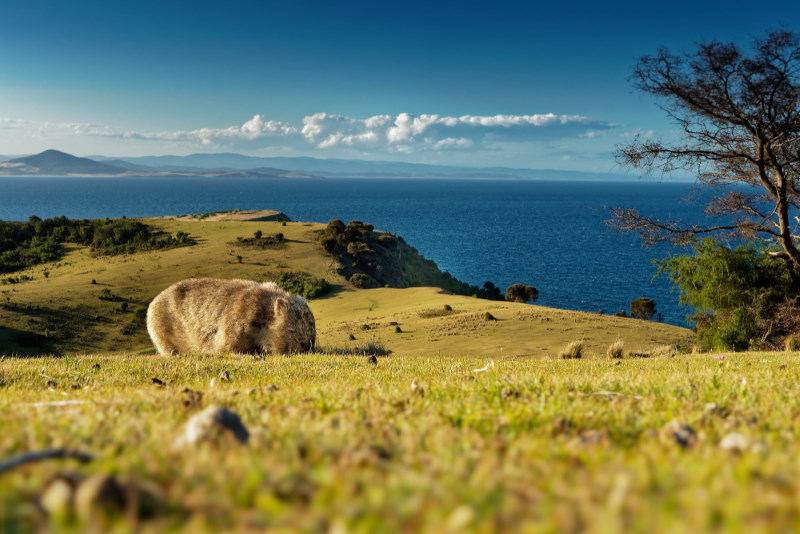 The common wombat lives basically solitary. Only during the mating season do they seek out each other’s burrows. Adult males are known to chase other animals out of their habitat. The southern broad-nosed wombat does like some company and shares its lodge with five to ten other wombats.

They can make quite a dash 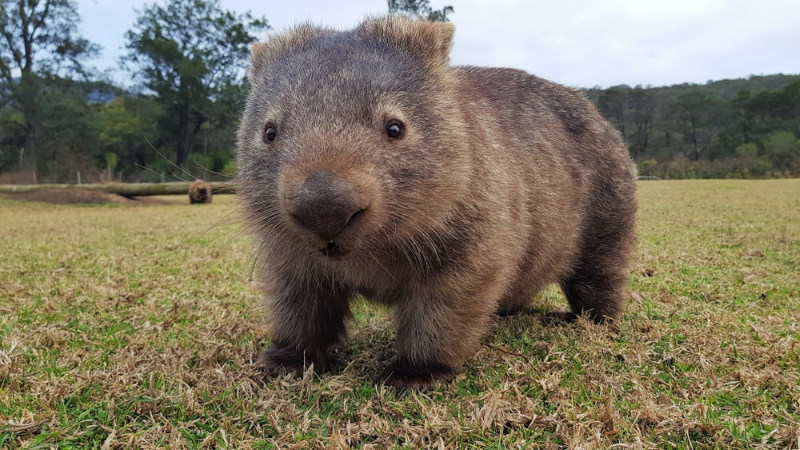 Despite their rather plump appearance and relatively short legs, wombats are quite fast. They don’t run marathons, but at short distances they reach speeds of up to 40 kilometers per hour!

He turns his back on his enemy 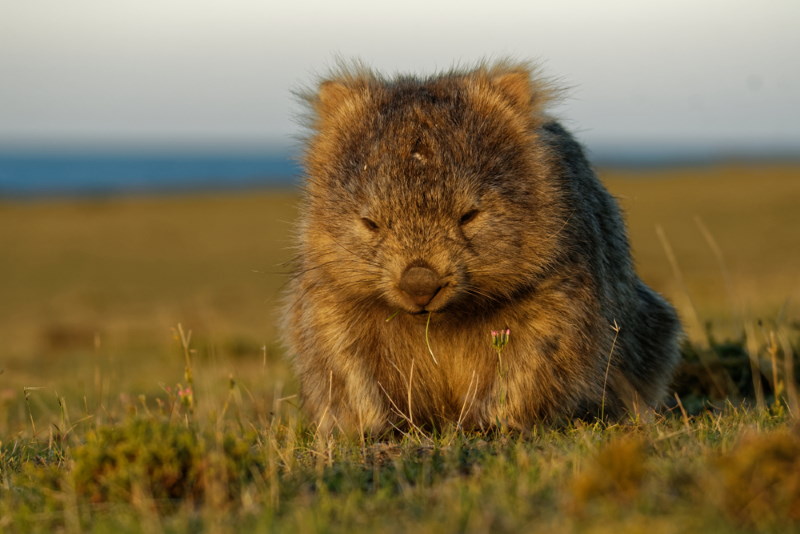 Dingoes and Tasmanian devils are the wombat’s main enemies. When these predators visit the burrow, the wombat turns around and closes the opening with its firmly built back. Mother Nature has provided wombats’ backs with a special combination of cartilage and bone, with a very hard skin over it. So its back actually acts as a kind of shield.

Not a stuffed animal, but a wild animal 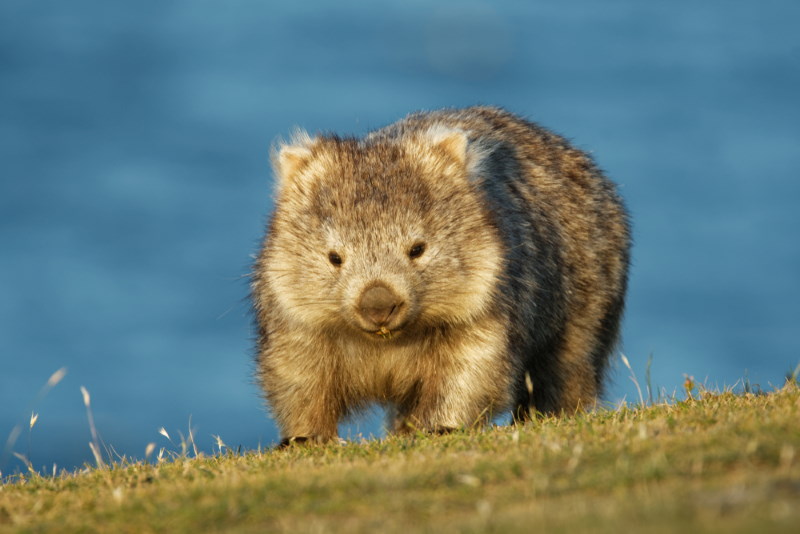 Its adorable appearance earns the wombat a lot of unwanted attention. Tourists are all too eager to take a selfie with one of these marsupials. They annoy the wombats as they walk by and even pick them up, forgetting that they are a wild animal and not a stuffed animal. Especially on Maria Island, an island where many wombats and other typical Australian animals are found, over-enthusiastic tourists really went too far. Tasmania therefore issued a call in 2019 for holidaymakers to take an oath promising to leave the island’s furry and feathered inhabitants alone and wild.